Tiny 120-Million-Year-Old Fossil Unearthed In China Has A T.Rex-Like Skull And The Body Of Small Bird

The hummingbird-sized creature is part of the species Enantiornithines, or "opposite birds" and likely evolved from dinosaurs like the velociraptor. 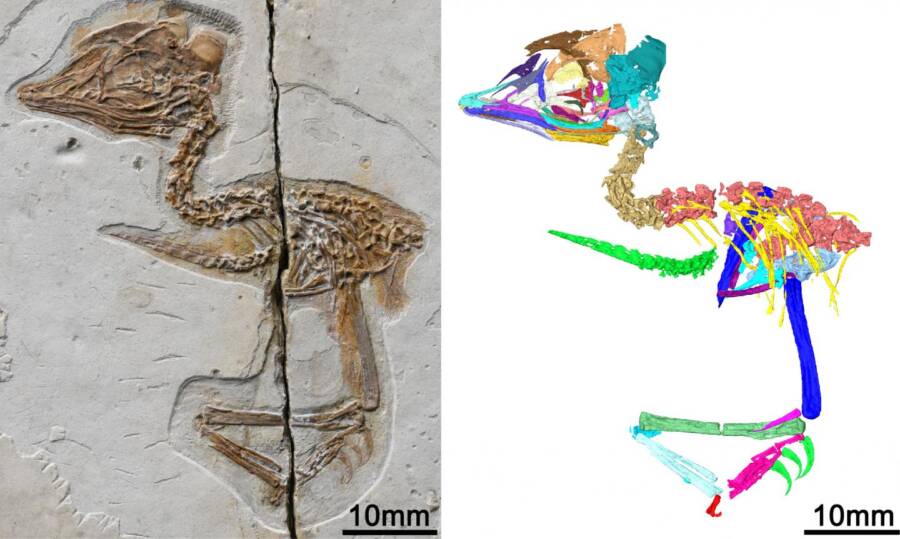 Chinese Academy of SciencesThe skull had attachment points for jaw muscles just like those found on dinosaurs or reptiles like alligators and lizards.

Researchers in China recently excavated the fossilized skull of a peculiar bird species that met its end 120 million years ago. The remarkable find was made all the more astonishing, however, when the skull showed highly similar features to that of a Tyrannosaurus rex — but on the tiny, inches-long body of ancient avian.

Discovered by the Institute of Paleontology and Paleoanthropology of the Chinese Academy of Sciences, the team was naturally astonished. The 0.75-inch skull fit in the palm of their hands, yet mirrored that of the much larger T. rex — while the rest of its body closely resembled that of a frail, modern-day hummingbird.

Upon excavating the precious find, experts took CT scans to reconstruct the fossil in detail, according to Science Alert. This proved the specimen belonged to an extinct group of early birds called enantiornithines, or “opposite birds” — and that ancient birds retained structural features from their dinosaurian ancestors.

“Having a ‘dinosaur’ skull on a bird body certainly did not stop the enantiornithines, or other early birds, from being highly successful in places all around the world for tens of millions of years during the Cretaceous,” said paleontologist Min Wang from the Chinese Academy of Sciences.” 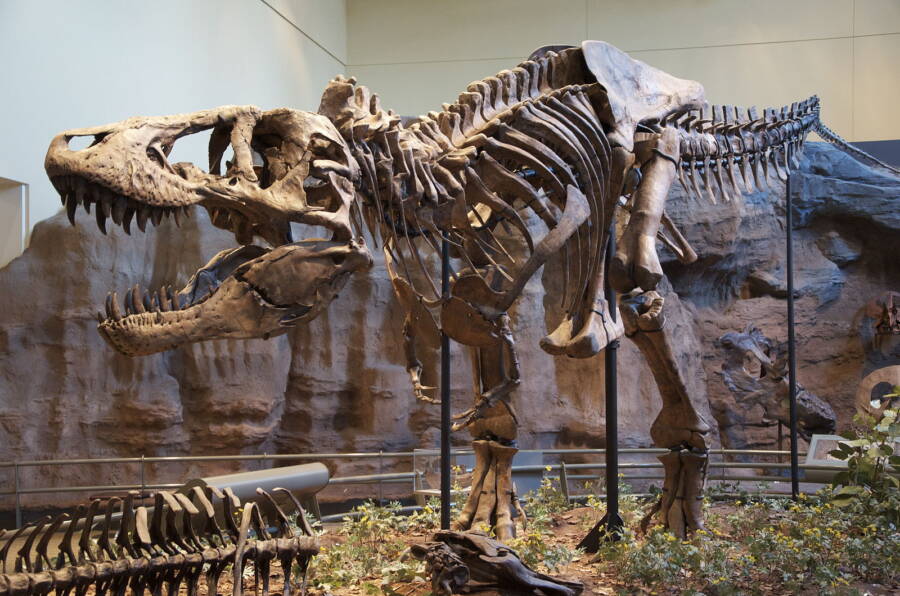 Wikimedia CommonsWhile only 0.75 inches long, the bird’s skull was staggeringly similar to that of a T. rex.

Many previously discovered enantiornithines are smaller than a cockroach, with this latest discovery a bit bigger. Armed with a pair of wings and claws, these prehistoric animals were one of the most prolific and diverse group of early birds — until disaster of apocalyptic proportions struck the Earth.

The scientific community is in firm agreement that this species didn’t survive the mass extinction event that wiped out the dinosaurs 66 million years ago. Their traits, however, certainly did, and are considered a vital evolutionary step to the modern-day birds we see flying around today.

As published in the Nature Communications journal, the study had experts reconstruct the bird’s family tree as well as its skull, providing experts with new insight on the cranial evolution of birds. Immediately apparent from the CT scans was that the bird’s skull wasn’t kinetic, but instead locked into place like that of a T. rex.

The skull’s temporal regions, meanwhile, showed stark differences from any living birds today, according to Science Times. Perhaps most captivating on a primal level were the attachment points for jaw muscles that experts spotted — as these are typically only found on dinosaurs or reptiles like alligators and lizards. 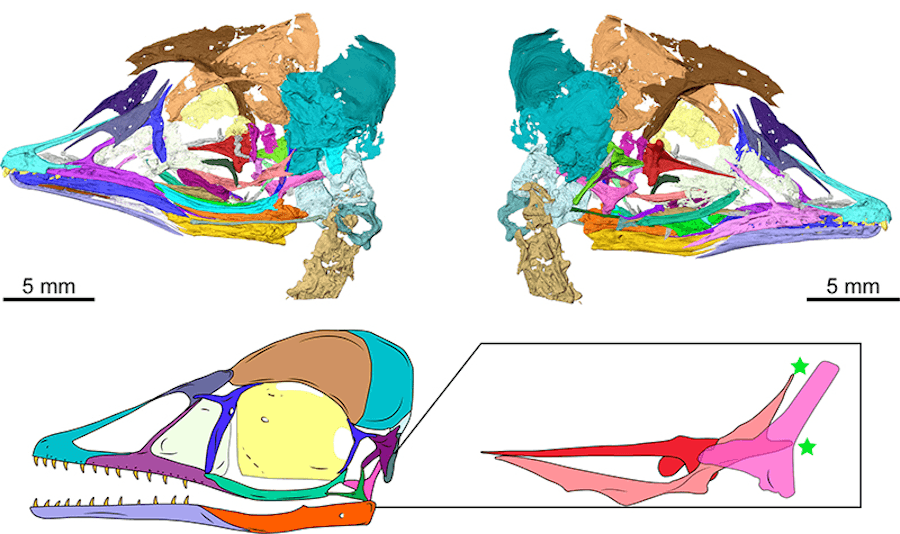 According to the Chinese Academy of Science, such morphology prevented the animal from moving its upper and lower jaw independently. What stunned lead author Dr. Wang Min the most, however, was the mystery of one curious bone he had trouble identifying.

“When reconstructing all parts of the skull three-dimensionally from the high resolution CT scans of the fossil, I had a problem figuring out one bone in particular,” he said.

It was only after his colleague Dr. Thomas Stidham suggested this might be the pterygoid, a masticatory muscle on the lower jaw, that the team realized what they had found. As a result, this ancient fossil has officially become the first well-preserved pterygoid ever found in an early bird.

Dr. Stidham noted that it looked “exactly like that of the dromeosaur Linheraptor,” leading him to compare the newly taken CT scans with those of extinct velociraptors — and finding that they resembled that species far more closely than any other living bird. 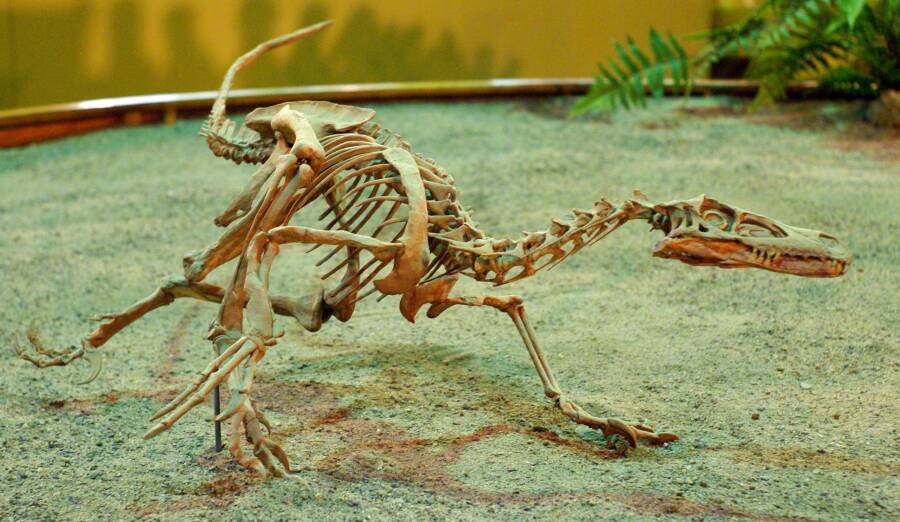 Wikimedia CommonsExperts believe that these early birds evolved from the same group of dinosaurs that included the terrifying velociraptor.

“The fossil bird and dinosaurs also lack the discrete contact between the pterygoid and quadrate near the palate that is used in skull kinesis in living birds,” said Stidham. “In combination with the ‘locked up’ temporal bones, the difference in the palate structure also points to the absence of kinesis among early birds.”

Ultimately, the notion that birds are essentially living dinosaurs has found well-substantiated and scientific support decades ago. This study, however, is yet another astounding piece of evidence of that contention, and indicates birds evolved from a subset of dinosaurs that included the legendary velociraptor.

As it stands, the rigorous study overwhelmingly indicates that the back of this ancient bird’s skull is far more raptor-like than it is bird-like. The paper also suggests that skull movement (or “cranial kinesis), largely the independent movement of each jaw, must have evolved much later — and led to the diversity we see today.

“Despite their global conquest and success through the Cretaceous, only the crown group of birds with its derived assemblage of features, allowing for and driving cranial kinesis, survived the end Mesozoic mass extinction, and has thrived ever since,” the study concluded.

Fortunately for us, the biggest of those modern-day birds that thrive today haven’t evolved to be two or three times as large. With dinosaur DNA in their genes and winged and clawed features on their bodies, us humans would make for rather easy prey.

After reading about the ancient bird with a T. rex-like skull, learn about the smallest-ever dinosaur found in 99-million-year-old amber. Then, read about the nodosaur dinosaur “mummy” found with its guts and skin intact.