Enos became the first animal to orbit Earth in an American vessel in 1961 and his trip paved the way for further space exploration. 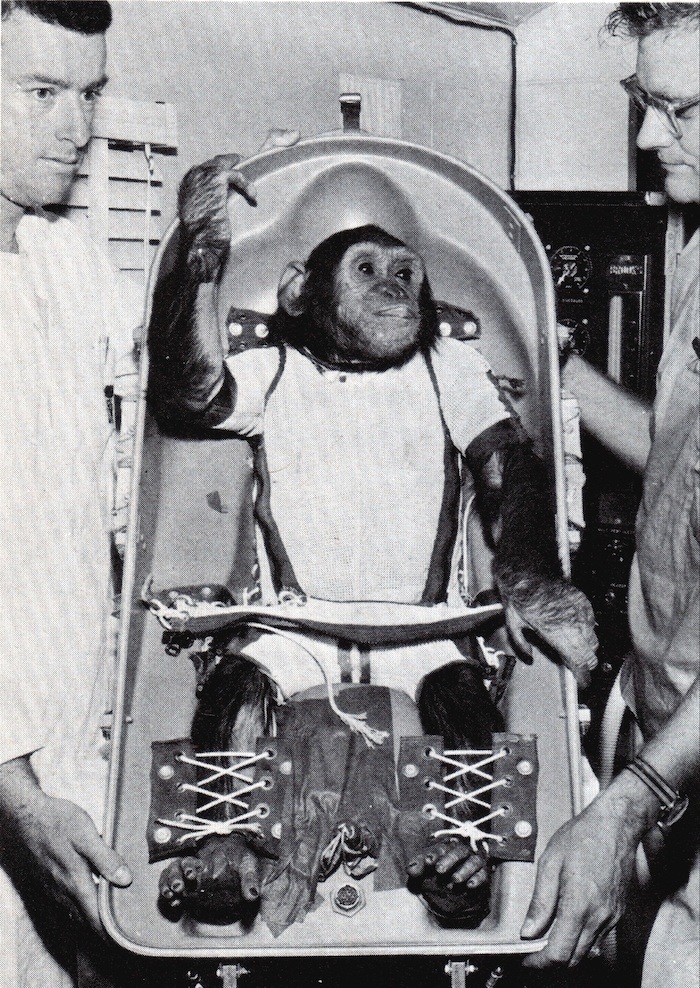 Enos, the first chimpanzee to orbit the Earth, strapped into his flight seat./caption]

In the 1960s, space was the ultimate frontier. No quest was more honorable than exploring that vast expanse of stars, orbiting the planet or rocketing through the dangers of the unknown to plant a celebratory flag on Earth’s biggest satellite. But it was a chimp, not a human, who first braved a trip to space and back in an American vessel.

On November 29, 1961, Enos the chimpanzee became the second chimp in space, and the first chimp to orbit the Earth. Enos—which means “man” in Hebrew—was one of an elite group of chimps trained as a part of Project Mercury. From 1959–1963, Project Mercury focused on the goal of putting a human in orbit, and then bringing that human safely back to Earth.

Enos underwent a year and a half of training, a total of 1,250 hours, which included things like simple oddity problems (such as picking a shape that was not like the other two shapes presented). The ultimate goal of the project was to determine if animal minds and bodies would be able to function while orbiting Earth.

Project Mercury’s detractors argued that sending Enos would be a waste, since the Soviet Union had already beaten the United States to it by a couple of months—and with a human to boot—when Yuri Gagarin orbited the earth without experiencing negative side effects.

Still, NASA thought it best to continue as planned. What didn’t go as planned was Enos’ simple oddity problems. During training, Enos received a shock on the bottom of his feet whenever he picked an incorrect answer. He completed the tasks with relative ease on Earth, but in space, the first task malfunctioned and the correct answer wasn’t available to be chosen. Enos was shocked repeatedly while he tried desperately to pick the correct answer—a total of 76 times.

After all was said and done, however, Enos’ trip had a happy ending. He landed safely in the waters of Bermuda, and the research from his flight was used in the first successful human American mission to orbit the Earth three months later.