Aerialist Erendira Wallenda of The Flying Wallendas dangled from a helicopter, held up only by her teeth, over Niagara Falls. 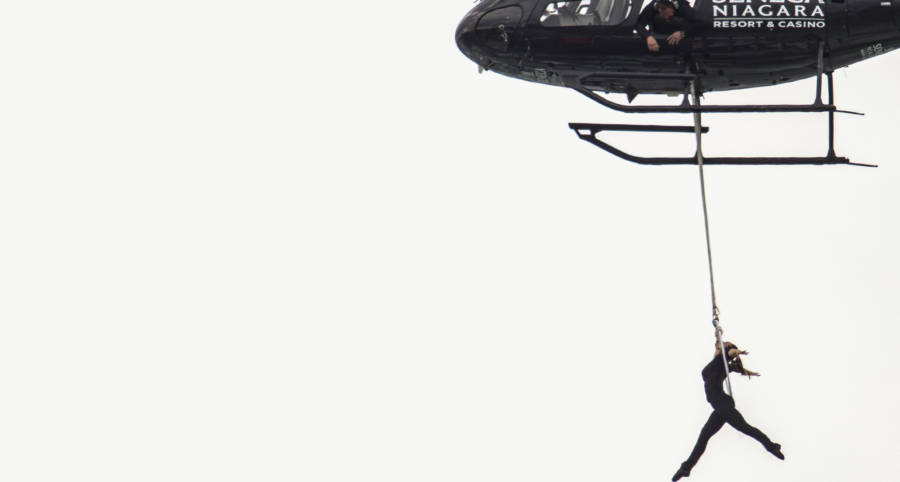 This morning, aerialist Erendira Wallenda dangled from a helicopter over Niagara Falls held up only by her teeth.

The acrobat flew in sitting on a hula hoop suspended from a helicopter. She then performed a number of stunts, including hanging by just her teeth over the raging falls multiple times.

This act set the Guinness World Record for the greatest height to iron-jaw hang from. The previous holder of this title was Wallenda’s husband, Nik, who had hung by his teeth over Silver Dollar City in Missouri. He’s another acrobat, who too performed a daring stunt at Niagara Falls, when, in 2012, he crossed the falls on a tightrope.

These types of stunts are par for the course for the Wallenda family, a dynasty of acrobats and aerialists who have been performing death-defying feats for at least the last hundred years. Dubbed ‘The Flying Wallendas” in 1905, they worked as a circus act in Europe for years, before they were discovered by John Nicholas Ringling, of Ringling Brothers fame, who brought them to America to work for his circus. Since then, they have remained a prominent family of acrobats, traveling across the US, performing stunts and acrobatic feats.

Though their feats are well known, the Wallendas are far from the first people to attempt or carry out wild acts at Niagara Falls. The famous waterfall has been involved in a number of madcap stunts, beginning with Sam Patch, dubbed “The Yankee Leaper,” who, in 1829, was the first person to jump off of the falls and survive.

This stunt was followed by a number of copycats, some more successful than others, jumping off of the falls in a tradition that continues today. Tightrope walkers have also frequently made use of the falls, walking across wires or ropes suspended over the turbulent waters.

This latest stunt by Erendira Wallenda is a part of a long history of both the Wallenda family and the tradition of using Niagara Falls as the setting for transfixing, audacious stunts.

Next, check out some more death-defying feats, like this video of Russian daredevils climbing the half-built Shenzhen Tower in China. Then, learn the extraordinary story of Annie Edson Taylor, the first woman to go over Niagara Falls in a barrel.