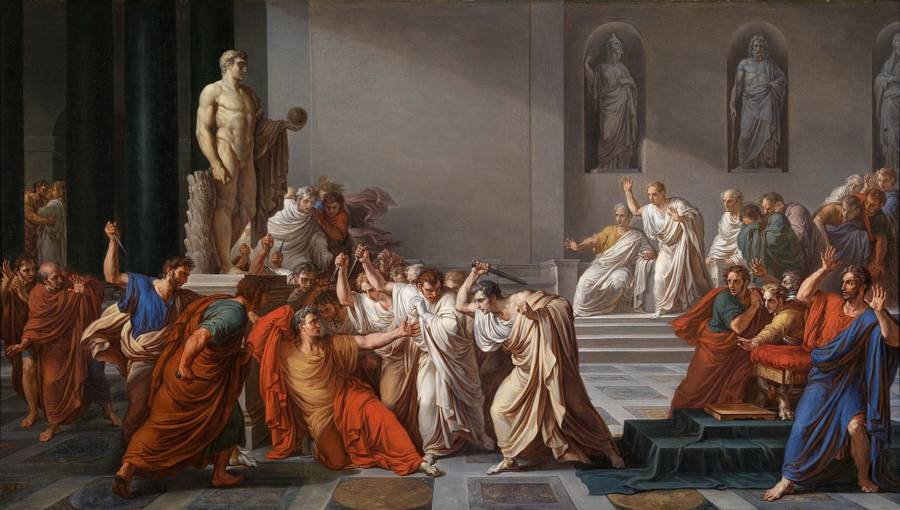 Like Kennedy, Julius Caesar was one of those “charismatic populist” types who never seem to last long in politics.

Caesar was ambitious from an early age. Through bribes, wars, and politics, he worked his way up through the Roman political system until he had declared himself the “dictator in perpetuity” of Rome.

He was more powerful than any man had been since the beginning of the Roman Republic. But to the many of the men in the Senate, this was a deeply troubling sign. A conspiracy rose up to kill Caesar; and in time, even Brutus, one of Caesar’s most trusted friends, joined the plot.

Conspirators ambushed Caesar on the floor of the Senate on March 15, 44 BC — known as the Ides of March. 60 men pounced, stabbing him 23 times before the carnage was over. In his last moments, it is said, Caesar pulled his toga over his head, unable to bear the sight of Brutus, the one man he’d trusted, among the men who’d betrayed him.

Wikimedia CommonsA coin with two daggers above the words “Ides of March”, minted by Brutus to commemorate his role one of the most famous assassinations of a Roman ruler.

If Caesar’s killers thought they were saving the republic, they were dead wrong. Outrage at the death of the people’s hero drove fighting men to the banner of Octavius, Caesar’s nephew and adopted son, who raised an army and navy to fight the plotters.

Rome erupted into civil war as Octavius led an army against the men who had killed Caesar; and then, in turn against his own ally, Mark Antony. When the bloodshed ended, more than just men had died. Octavius was crowned emperor, ending the Roman republic after 500 years.