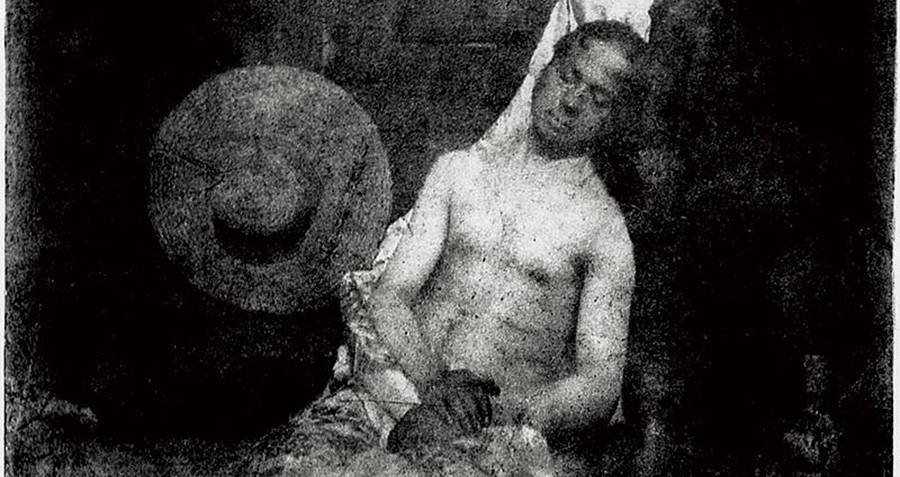 Hippolyte Bayard was an early 19th-century photographer. Though inventors like Louis-Jacques Mande Daguerre and William Henry Fox Talbot are often credited with the invention of what came to be known as photography, Bayard often claimed that he had invented it before anyone.

Granted, he was slighted by the French Academy of Sciences, after he was persuaded to postpone his photography announcement, allowing Daguerre to announce his invention first.

Bayard was so offended by the slight that he faked his own death with a photo — one that would become the world’s first staged photo. In the photo, Bayard himself is seen leaning against a wall, his eyes closed, feigning death. The caption, handwritten on the back of the photograph reads:

The corpse which you see here is that of M. Bayard, inventor of the process that has just been shown to you. As far as I know this indefatigable experimenter has been occupied for about three years with his discovery. The Government which has been only too generous to Monsieur Daguerre, has said it can do nothing for Monsieur Bayard, and the poor wretch has drowned himself. Oh the vagaries of human life….! … He has been at the morgue for several days, and no-one has recognized or claimed him. Ladies and gentlemen, you’d better pass along for fear of offending your sense of smell, for as you can observe, the face and hands of the gentleman are beginning to decay.

He then sent the photo to the French Academy of Sciences, hoping that they would right their previous injustice, and credit him with the invention of photography. However, the academy realized almost instantly that Bayard was still alive, and disregarded the photo.

Despite his faked death, Bayard went on to contribute much to the photographic society and helped found the French Society of Photography.