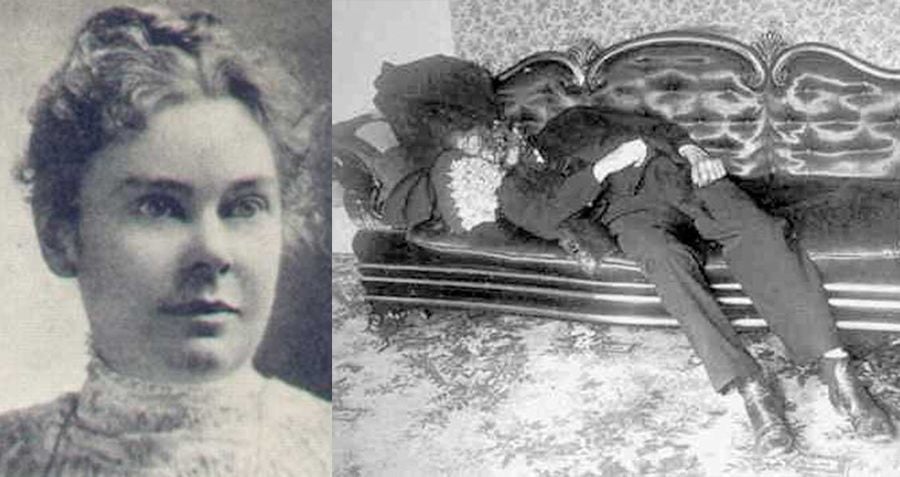 Wikimedia CommonsLizzie Borden and the remains of her father, Andrew Borden.

The deaths of Andrew and Abby Borden are arguably two of the most famous murders in all of American history.

August 4, 1892, started off like any other day for the Borden family. Andrew started the morning by going into town to deal with some business, leaving his daughter Lizzie, a 32-year-old Sunday school teacher, at home with his wife, Abby, and the family’s maid, Bridget Sullivan.

When Andrew returned later that day, his wife was nowhere to be found. Lizzie told him that Abby had received a note and gone to visit a friend.

Abby, though, hadn’t gone anywhere. At that very moment, she was just upstairs, lying dead in a pool of her own blood.

Lizzie helped her father relax on the couch and take a nap. She tried to convince Bridget to leave the house, telling her about a department store sale down the road, but Bridget turned her down. She wasn’t feeling well, she told Lizzie. Instead, she went to her bedroom, laid down, and fell asleep.

Sullivan’s rest was cut short with a fit of screams and shouts. Lizzie was screaming that her father had been murdered. When Sullivan rushed out, she found Andrew dead on the couch, covered in blood. His face was so badly disfigured that he was nearly unrecognizable.

In the panic, Lizzie remembers that her stepmother, Abby, should have returned home by now. She asked Sullivan to check for her upstairs. The search, though, was short. Sullivan only made it halfway up the stairs before she found her, hacked to death with a hatchet.

Abby had received 19 blows from a hatchet and her husband had been hit 11 times. In the beginning, Lizzie was not a suspect, but after a friend caught her burning one of her dresses because it was stained, she was arrested and put on trial for the murders.

Ultimately, the court cleared Lizzie of the charges. There wasn’t enough concrete evidence against her, the defense provided witnesses that gave Borden an alibi, and they just couldn’t believe that the female Sunday school teacher could ever be capable of such crimes.

Countless theories have been proposed about what might have happened. Some put the blame on Lizzie Borden, others on Sullivan, and still others say that the girls committed the killings together. But more than 100 years later, the mystery remains unsolved.