Beyond The 40 Whacks: The Story Of The Infamous Lizzie Borden Murders

Sunday school teacher Lizzie Borden became a media sensation when she was accused of murdering her father and stepmother with an ax on August 4, 1892. But was she guilty?

In 1892, a grisly crime rocked the quiet town of Fall River, Massachusetts. Andrew Borden and his wife Abby had been found brutally murdered — bludgeoned to death by an ax. While police didn’t know who to blame at first, suspicion soon fell on Andrew’s 32-year-old daughter, Lizzie Borden.

A spinster and Sunday school teacher from a well-off family, Lizzie Borden seemed like the last person capable of committing a horrific crime. But cops struggled to find any other suspects in the murder case, and they couldn’t help but notice that Lizzie’s story kept changing. 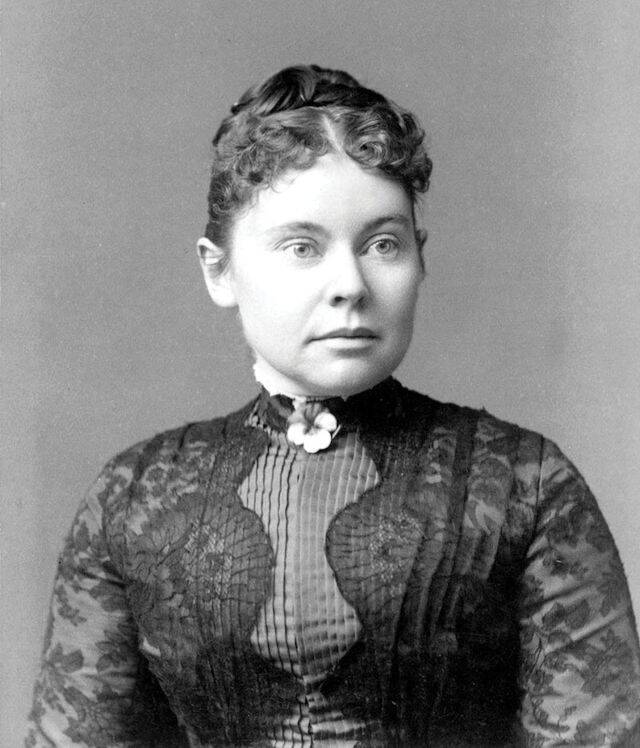 Wikimedia CommonsA portrait of Lizzie Borden, taken a couple years before Andrew and Abby Borden were murdered in 1892.

Ultimately, the young woman never admitted to committing the murders. But her 1893 trial captivated the entire nation. And while she was eventually acquitted, this only deepened the mystery.

Did Lizzie Borden kill her father and stepmother? If so, why? And if she didn’t, then who did?

The Day Of The Borden Ax Murders 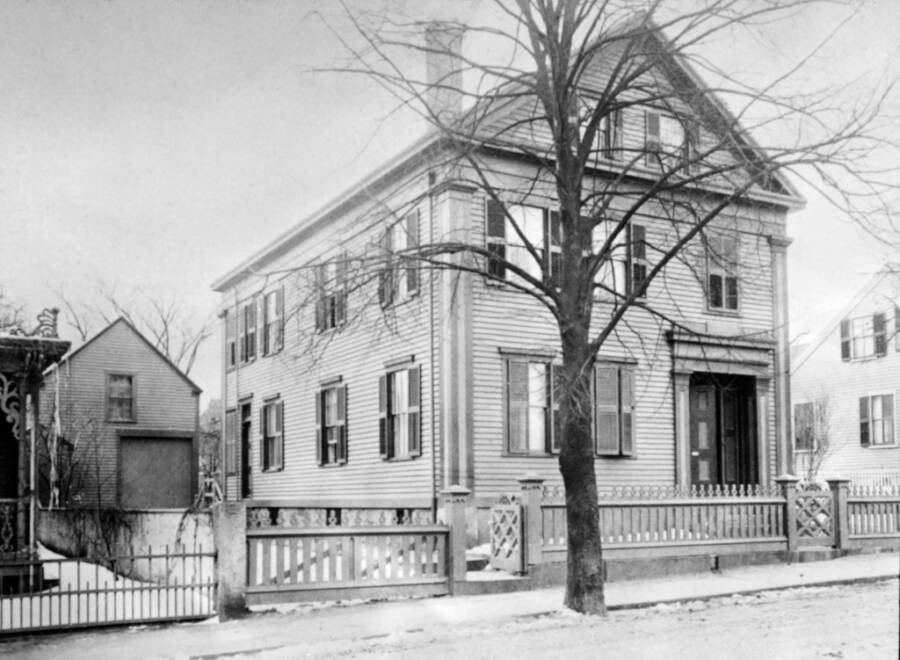 At first, August 4, 1892, started out as a normal day at the Borden house in Fall River, Massachusetts. The family’s maid, Bridget Sullivan, served breakfast to Andrew and Abby Borden while Lizzie slept upstairs. Before long, Andrew went into town. And Abby decided to straighten up the guest room in the home, where Lizzie’s uncle had slept the night before.

The Bordens were a prosperous family and well-respected in Fall River. Andrew had been married to his first wife, Sarah, until her death, and married his second wife a few years later. His two daughters, Emma and Lizzie, were known for being well-behaved and devoutly Christian.

But all was not well beneath the surface at the Borden house. Although Abby had been their stepmother nearly all their lives, Emma and Lizzie didn’t like her. And Lizzie really wanted the family to move to a nicer part of town. 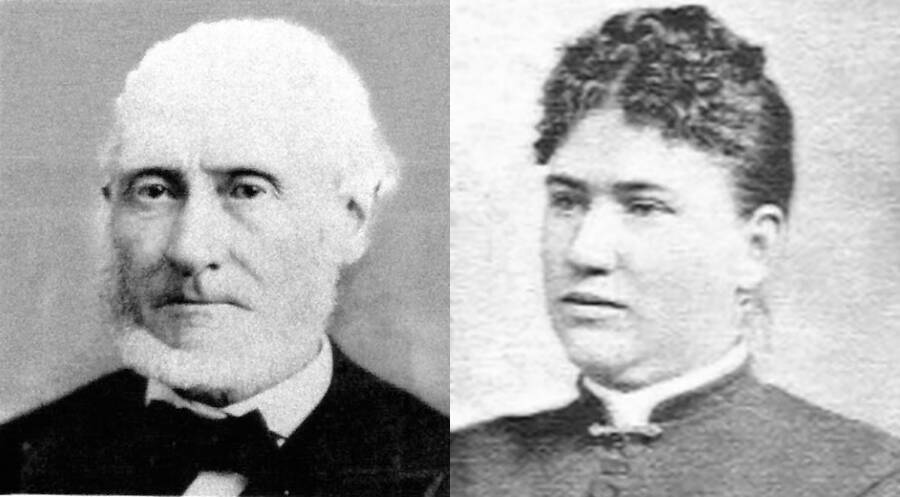 That August, tensions in the Borden family were particularly taut. For one thing, it was extremely hot outside. And the Borden family had felt unwell for the past couple of days, perhaps because of bad mutton stew.

But by the morning of August 4th, everyone except for Sullivan felt more or less back to normal. So after Andrew Borden left for town, Abby climbed the stairs to the guest room to make the bed and tidy up. And — in the oppressive heat of that August morning — someone followed her.

Later on, Andrew Borden returned from town. He asked Lizzie where Abby had gone, to which his daughter replied that “Mrs. Borden” had left the house. According to Lizzie, her stepmother had received a note about a sick friend.

Andrew believed the story. He settled down on a sofa in the sitting room, as Sullivan — still feeling unwell — went to take a nap in her room.

But soon, the maid was awoken by a scream. It was Lizzie Borden, calling for Sullivan and crying that her father was dead.

Inside The Murder Of Andrew And Abby Borden 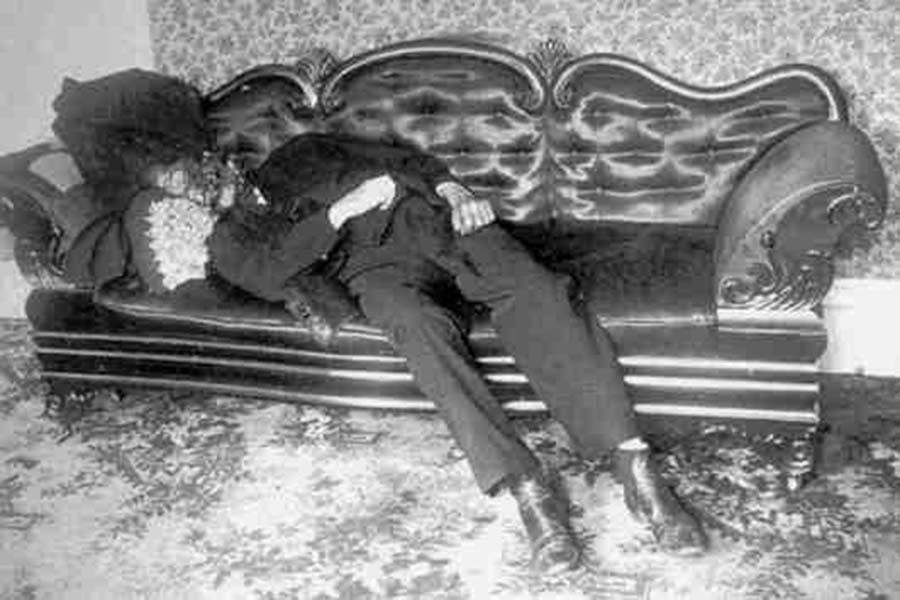 Shortly after the discovery of Andrew Borden’s body, Sullivan fled the house to find a doctor. But in the meantime, Lizzie’s screaming had attracted the attention of several neighbors, who called the police. Slowly, a curious crowd began to gather around the Borden residence.

At this point, Abby’s whereabouts were still unknown. Lizzie Borden told her concerned neighbors the same story she’d told her father: that her stepmother had received a note asking her to visit a sick friend.

Lizzie also mentioned that her parents had been ill in the previous days and that she suspected that their milk had been poisoned.

After Sullivan returned with a local doctor named Seabury Bowen, the maid went to see if Abby was upstairs — and found her dead body lying face down. She was surrounded by a pool of her own blood. 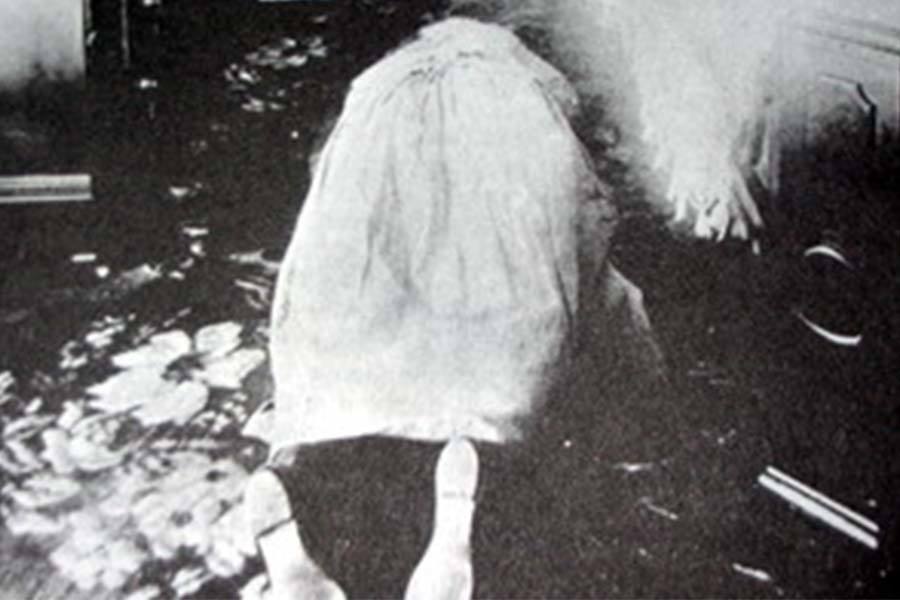 Wikimedia CommonsThe dead body of Abby Borden, which was discovered after Andrew’s body.

It was later determined that Abby Borden had been struck 19 times with a hatchet. And Andrew had been hit 11 times with the same weapon. While Andrew was hit fewer times, his corpse was still extremely gruesome.

One of Andrew’s eyes had been cut in half and his nose had been completely severed from his face. Meanwhile, Abby’s blood was dark and congealed. This led Bowen to believe that she had been killed first.

But who had killed them? Unfortunately, the case of the Borden murders would yield far more questions than answers.

The Investigation Into The Borden Murders 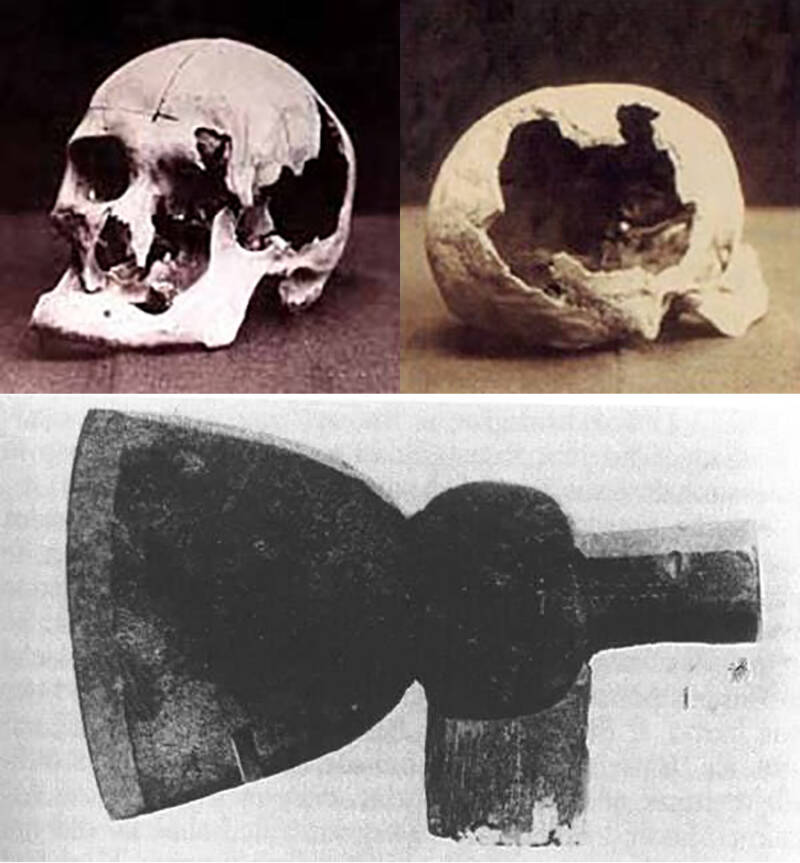 MurderpediaThe skulls of Andrew and Abby Borden, which were shown at the trial of Lizzie Borden.

At first, the police did not suspect Lizzie Borden. After all, she was a spinster and Sunday school teacher from a respected family. Plus, Lizzie had sworn to District Attorney Hosea Knowlton that she had been in the barn looking for a piece of iron when the attacks took place.

The cops initially believed the murders were perpetrated by a man — most likely a “foreigner.” Just a few hours later, they arrested an innocent Portuguese immigrant. But that assumption turned out to be one of many dead ends. A bloody hatchet was found on a neighboring farm — but it had been used to kill chickens. A strange man was seen near the Borden’s property at the time of the murders — but he had an airtight alibi.

Meanwhile, Lizzie Borden’s story kept changing. Her claim about searching for iron soon shifted into one about eating pears in the barn loft.

There was no physical evidence against her — not even a bloody scrap of clothing. But as the police investigated the double murder, they began to believe that no one else could have done it. 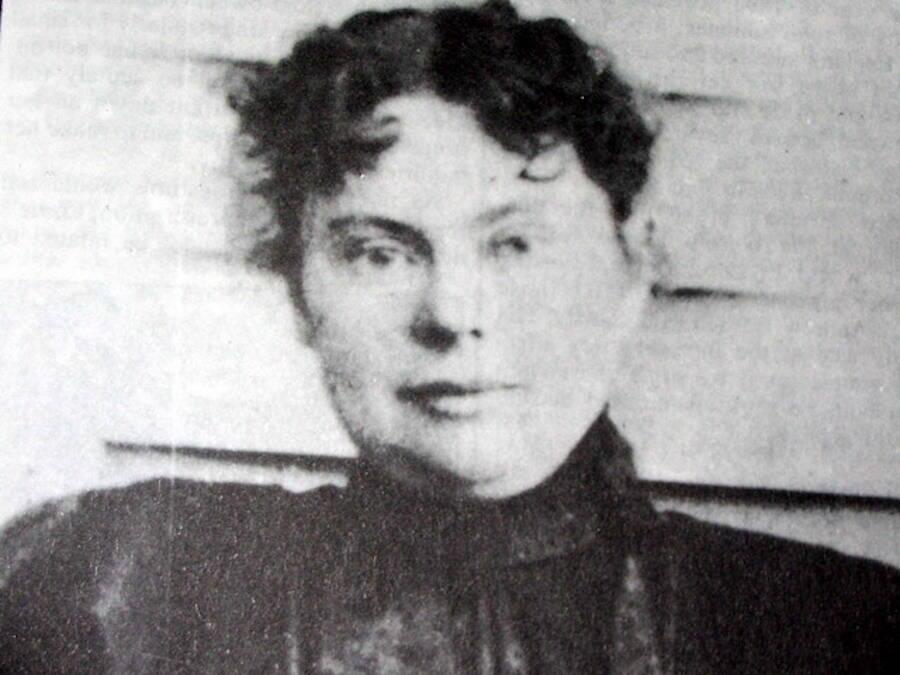 Wikimedia CommonsWhile Lizzie Borden was the prime suspect in a murder case, many townspeople came to her defense during her trial.

If Abby was killed in the morning, the murderer — assuming it wasn’t Lizzie or Sullivan — would have likely been hiding somewhere in the house for hours, awaiting Andrew’s return from town. During this time, he or she would have surely risked being spotted by Lizzie or Sullivan.

And what about that note Lizzie claimed her stepmother received? Abby had clearly never made it out of the house, so where was it? Lizzie told her friend Alice Russell that her stepmother may have accidentally burned it.

Investigators also discovered that the day before the murders took place, Lizzie had tried to buy poisonous prussic acid from a drug store. She claimed that she needed it to put an edge on a seal-skin cape. But the clerk had refused to sell it to her, saying that she needed a prescription.

And a few days after the murders, Russell saw Lizzie burning one of her dresses at the stove in her house. When Russell asked her why she was doing this, Lizzie said the dress was stained and could no longer be worn.

On August 8th, Borden attended an inquest hearing, during which she provided contradicting information about the murders — raising many eyebrows. By August 11th, she was arrested and put in jail.

The Infamous Trial Of Lizzie Borden 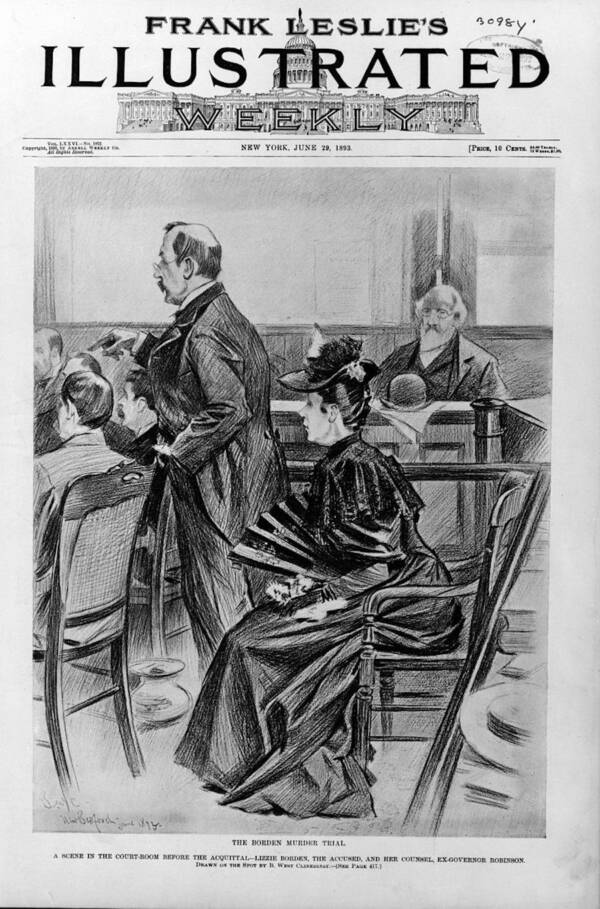 “Our proper Victorian ancestors couldn’t fathom that someone among the upper class – especially a woman – could commit such a heinous crime,” noted Deborah Allard, a reporter and resident of Fall River.

Though Lizzie never testified during the trial, she was still the star of the show. At one point, a piece of tissue paper covering the skull of her father fell to the floor. Lizzie caught sight of the bludgeoned skull and fainted.

But presenting the skulls of the Bordens turned out to work in Lizzie’s favor. Her lawyer reasoned that whoever caused such damage must have been covered in blood after the incident, but Lizzie’s clothes were clean. (This has led some to believe that she committed the murders naked.) 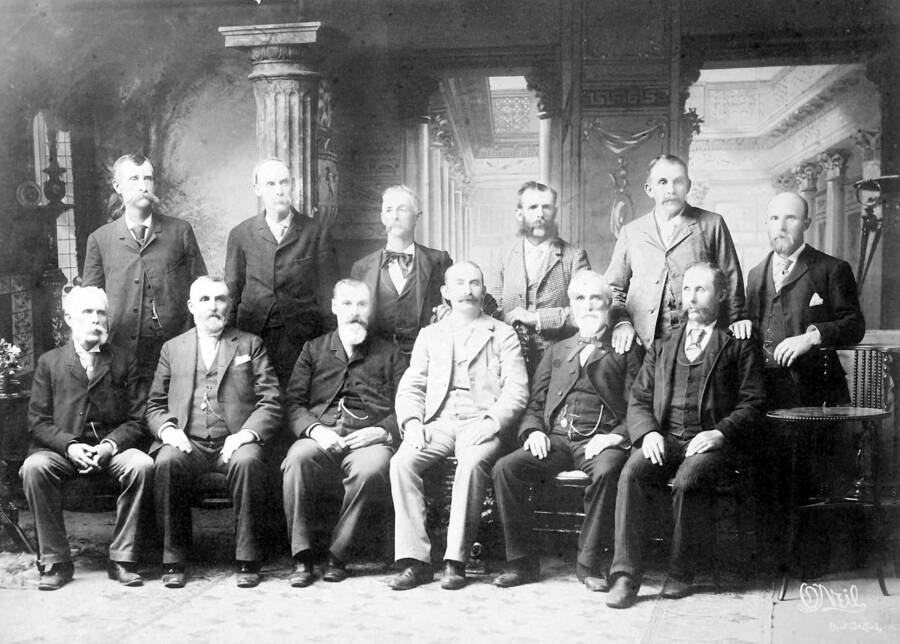 Wikimedia CommonsThe all-male jury at the Lizzie Borden murder trial. At this point in time, women were not allowed to serve on juries — which was a source of contention for Lizzie’s supporters.

And the defense was able to further cloud the water throughout the remainder of the trial. They produced witnesses who claimed to have seen Lizzie leaving the barn at the time of the murders and witnesses who’d seen strange characters around the Borden property.

The defense was even able to get the drug clerk’s testimony struck from the record, calling it “irrelevant and prejudicial.” They argued that the druggist had misidentified Lizzie Borden. And besides, even if Lizzie was the woman in the store, prussic acid could still be used for innocent purposes.

On June 19, 1893, Lizzie was found not guilty of murdering Andrew and Abby.

Soon after the dust had settled, Lizzie and her sister Emma, who inherited their father’s estate, bought a house in a more fashionable part of Fall River — where Lizzie had always wanted to live.

The Aftermath Of Lizzie Borden’s Acquittal 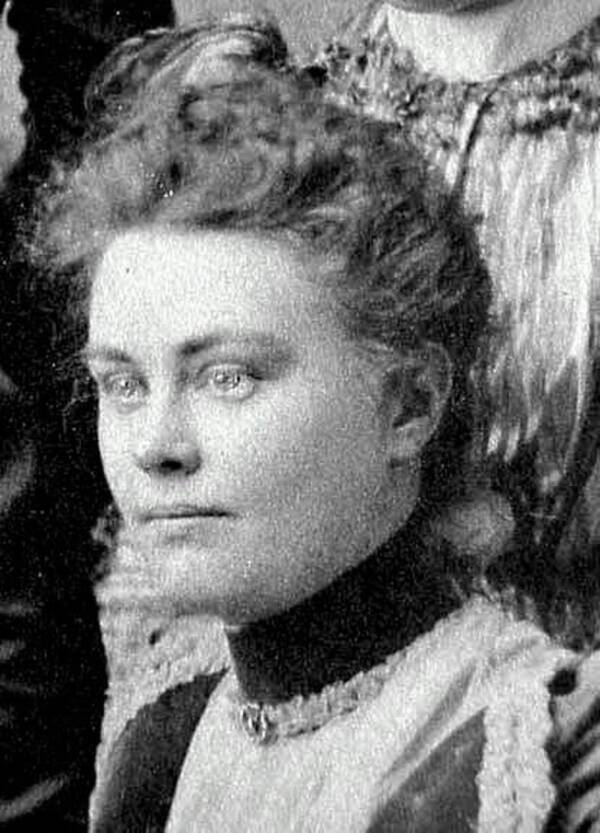 Wikimedia CommonsLizzie Borden in a photo taken in 1890. To this day, her potential involvement in the Borden murders is hotly debated.

The sisters lived peacefully together in Fall River until 1904 — when Lizzie Borden (now calling herself “Lizbeth”) met an actress named Nance O’Neill.

The pair formed a strong bond — some speculate they were lovers — but Emma did not approve of the relationship. Two years after Lizzie met Nance, Emma moved out of the house that she shared with Lizzie.

As for Lizzie Borden, she lived out the rest of her days in relative quiet and privacy. She died in 1927 at the age of 67 — taking anything she knew about the murders to her grave. Nearly a century after her death, people are still debating whether she really killed her father and stepmother or not.

But if Lizzie Borden didn’t commit the murders, then who did? 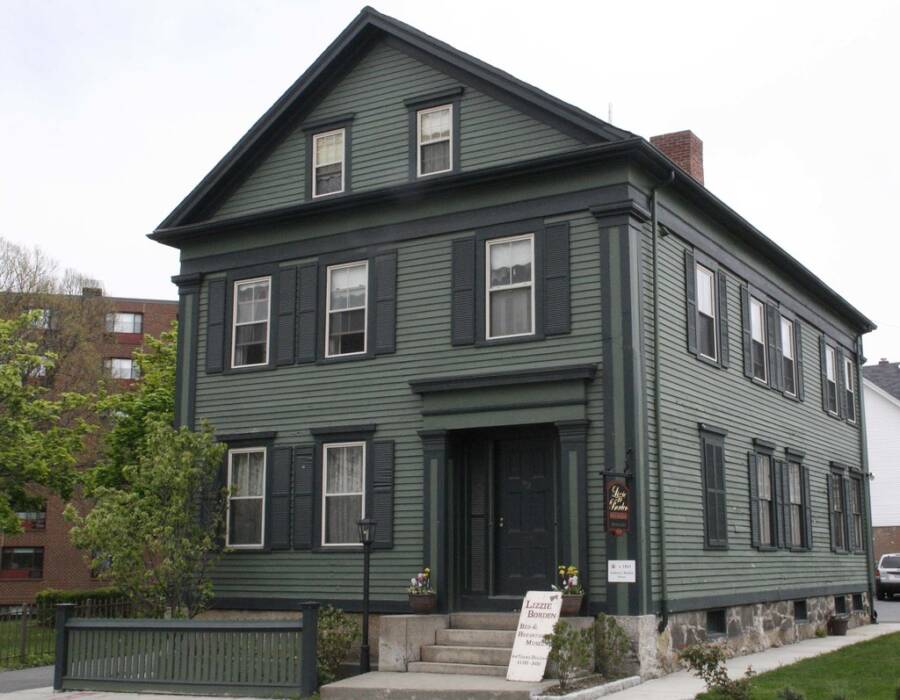 David/FlickrThe Borden house is now called the Lizzie Borden Bed & Breakfast, and it functions as a museum.

Some think that Andrew’s “illegitimate” son, William, committed the crime — and that Lizzie and Emma conspired to cover up his involvement. Others believe that the two sisters plotted the murders together. And another line of speculation suggests that Lizzie and Sullivan were having an affair, which somehow led to the murders. Yet others wonder if it could have been the work of someone unrelated to the family.

The journals revealed Jennings’ direct observations of his client, who history remembers as cold-blooded and callous. But Jennings saw a sensitive side to Lizzie, a woman grieving for the loss of her loved ones.

However, these notebooks did not bring the public any closer to knowing who actually killed the Bordens.

And so, the mystery endures. As does the popular rhyme about the Borden murders: “Lizzie Borden took an ax/And gave her mother forty whacks/When she saw what she had done/She gave her father forty-one.”

After diving into the life of Lizzie Borden and the grisly murder of the Bordens, discover the tale of Hans Schmidt, the only Catholic priest ever executed in the United States. Then, read about the truck-driving mass murderess Olga Hepnarová.