Learn how Hacienda Nápoles went from Pablo Escobar's house to a family-friendly theme park in Colombia.

If you were to drive about 93 miles east of Medellín, Colombia, you would eventually make it to a town called Puerto Triunfo. Before long, you’d come across the legendary Hacienda Nápoles.

Today, Hacienda Nápoles is a family-friendly theme park with water attractions, a wildlife sanctuary, and museums. But this is no Disneyland. 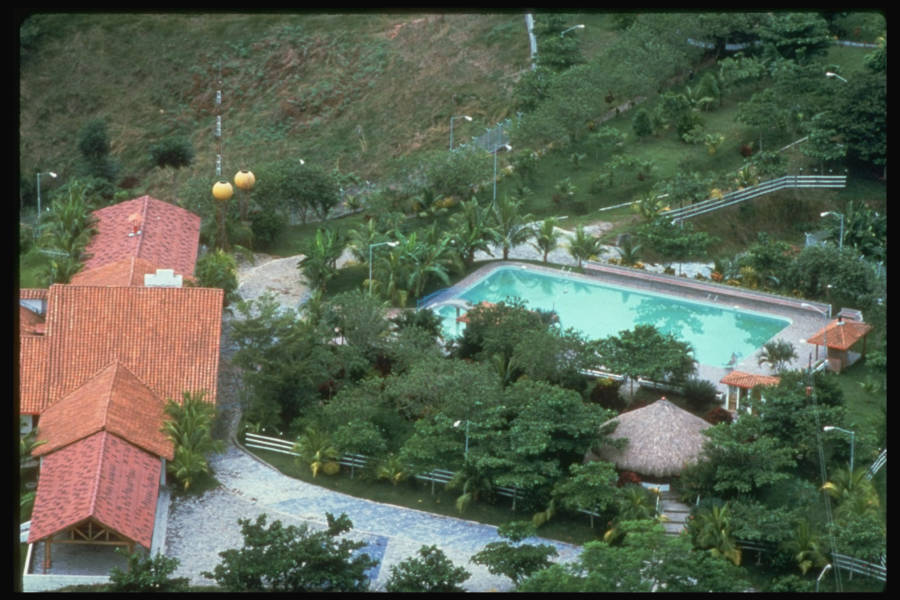 Unlike other famous theme parks, Hacienda Nápoles has quite a seedy history. After all, it was once the location of a Playboy Mansion-like cocaine palace — owned by the notorious Pablo Escobar.

The Hacienda In Its Heyday

Years before Pablo Escobar went on the run, the cocaine kingpin purchased Hacienda Nápoles in 1978. Measuring about 7.7 miles, Escobar’s estate soon became just as impressive as his power in the 1970s and ’80s. 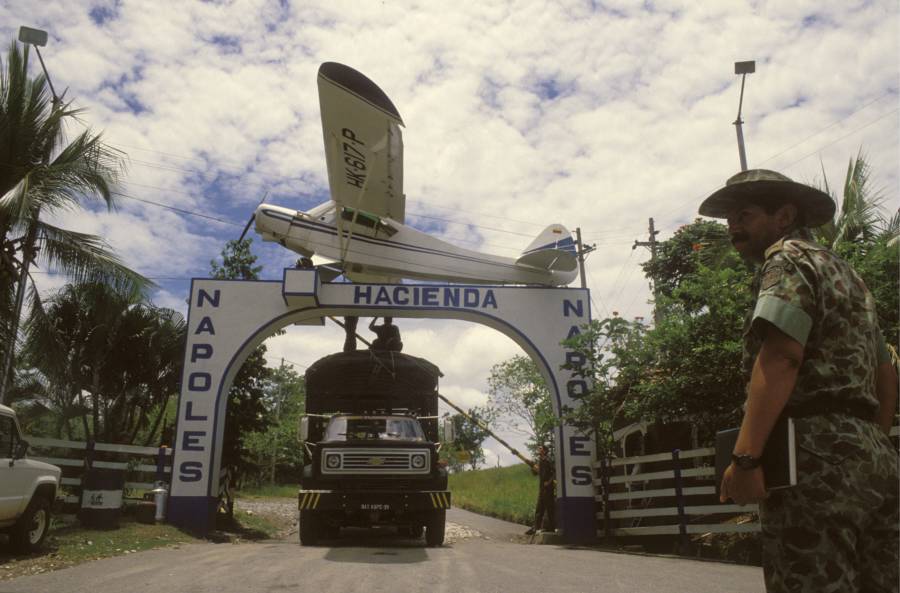 Eric VANDEVILLE/Gamma-Rapho via Getty ImagesThe original entrance to Hacienda Nápoles. A replica of Pablo Escobar’s plane sits on top of it.

As was the case in many aspects of his life, Escobar spared no expense when it came to constructing his paradise.

By the time it was finished, Hacienda Nápoles was home to a sprawling Spanish colonial mansion, a sculpture garden, an airport, several swimming pools, lush lawns, man-made lakes, and even a private zoo — complete with exotic birds, horses, elephants, rhinos, and hippos. 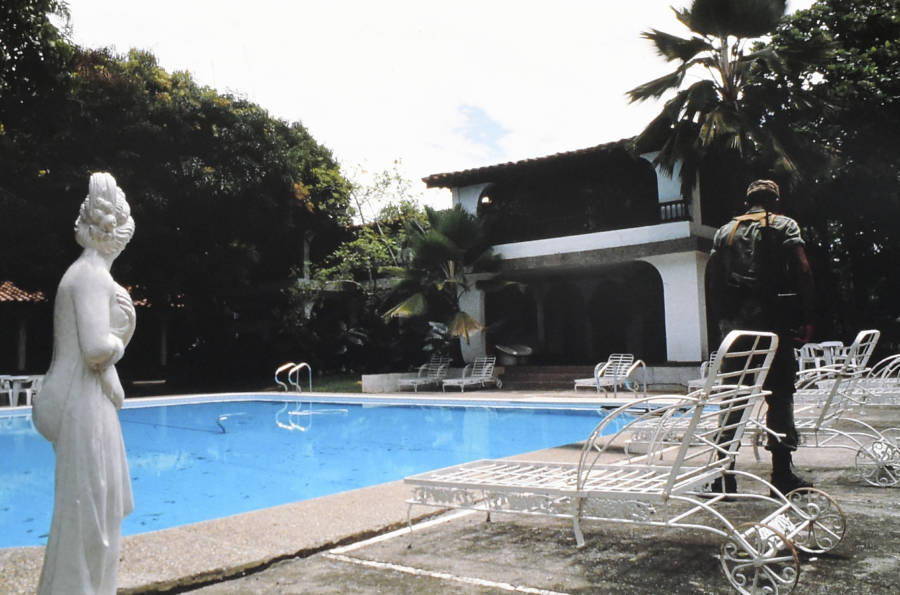 Eric VANDEVILLE/Gamma-Rapho via Getty ImagesOne of the several pools at Hacienda Nápoles.

Along with being a luxurious retreat for the kingpin and his family and friends, Pablo Escobar’s house also served as a display of his enormous wealth. Here, he showed off his massive collection of classic cars and bikes, and even built a racetrack for his go-karts.

So at the height of his power in the 1980s, Escobar could land his plane on the airstrip, then walk by his life-sized dinosaur sculptures and decide whether he’d rather enjoy his zoo, his go-kart track, or his bullring. It certainly wasn’t a bad deal for the drug lord.

While Hacienda Nápoles wasn’t Pablo Escobar’s only house, it was clearly his favorite. And since he was bringing in millions of dollars each day, he had plenty of cash to ensure that the property was outfitted with every single amenity he could ever dream of.

Rare footage from Hacienda Nápoles in its heyday.

But it was the main entrance that showcased Escobar’s ultimate pride and joy: a replica of his Piper PA-18 Super Cub airplane. This was the small plane that had transported his very first shipment of cocaine to the United States — a decision that clearly led to the wealth and prestige he enjoyed.

Resting atop the blue and white arch that welcomed guests to the estate, the plane served as a reminder — to all who passed under it — that Colombia was under the control of the cocaine king.

But alas, the luxury estate was not to last — because its owner would soon be dead.

After the drug lord was shot and killed by Colombian police in 1993, the Escobar family found themselves at odds with the Colombian government over the ownership of Hacienda Nápoles.

The government eventually took over the land. However, officials soon realized that they wouldn’t be able to manage all the animals, so most of them were relocated to other zoos.

While the government managed to ship off most of the estate’s animals, they were unable to seize four of Escobar’s most beloved pets: his four hippos. This was because they were difficult to capture and transport.

Furthermore, at some point, the hippos actually managed to escape the property. And then, they began to multiply at an astounding rate. No one knows exactly how many hippos live in the local area now, but researchers estimate that there may be a population of up to 100.

This CBS This Morning segment looks into the hippo controversy in Colombia.

Today, most of the hippos reside on or near the property of Hacienda Nápoles, but some have made their way into the Magdelena River basin, a major waterway that cuts through the western half of Colombia.

Hippos have even been spotted nearly 100 miles away from the estate.

Scientists and conservationists are now going back and forth about what to do with the hippos, which many believe are an invasive species. In fact, they might even be changing the ecosystem, making life harder for native plants and animals in the country.

While some experts have recommended culling the hippos, others have called for sterilizing them to stop the breeding. Meanwhile, some of the local people have grown attached to the hippos over time — which may make it difficult for either of these efforts to move forward.

For now, the giant creatures remain free to roam the property and beyond. Visitors may notice signs that read “Peligro: Presencia de Hipopótamos,” warning them to watch out for the aggressive mammal. 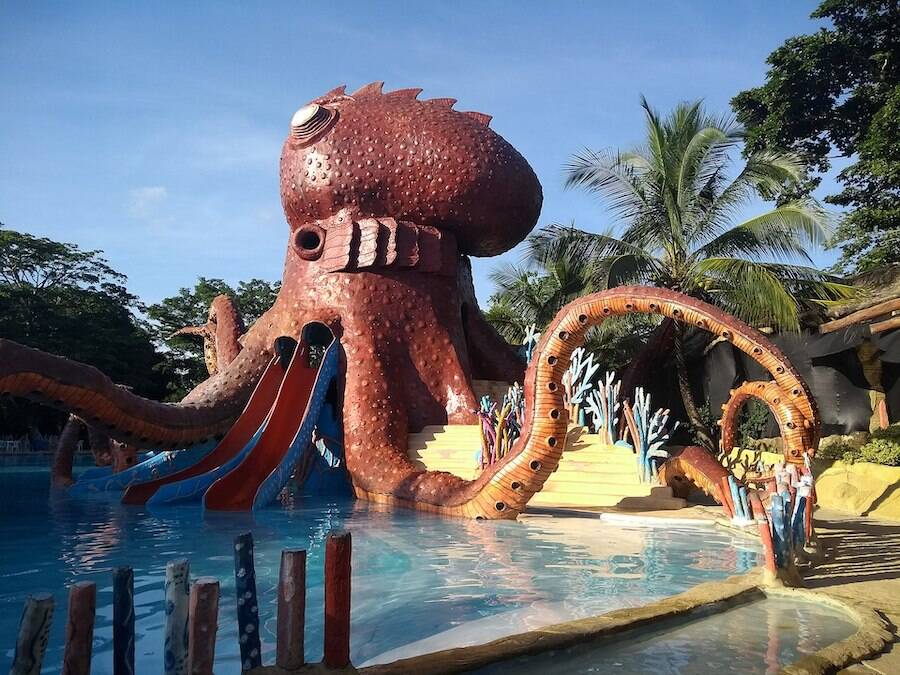 In 2006, Hacienda Nápoles was valued at 5 billion pesos (which was the equivalent of around $2.23 million). At the time, the estate had just been declared the property of the Colombian state.

In a translated statement, officials said:

“It is a ruling that the National Narcotics Directorate celebrates because it also serves to reiterate the message that we repeatedly deliver to young Colombians and that is that drug trafficking does not pay, that everything that is achieved in this way they will lose.”

By the 2010s, a private company had taken control of the land and began operating the Parque Temático Hacienda Nápoles, a tourist destination for all ages that includes a water park, a butterfly farm, and museums.

You can swim under the “Victory Waterfalls” or the gigantic sculptures. You can also see ostriches, zebras, meerkats, monkeys, and other exotic creatures — the majority of which are not native to Colombia, but Africa. 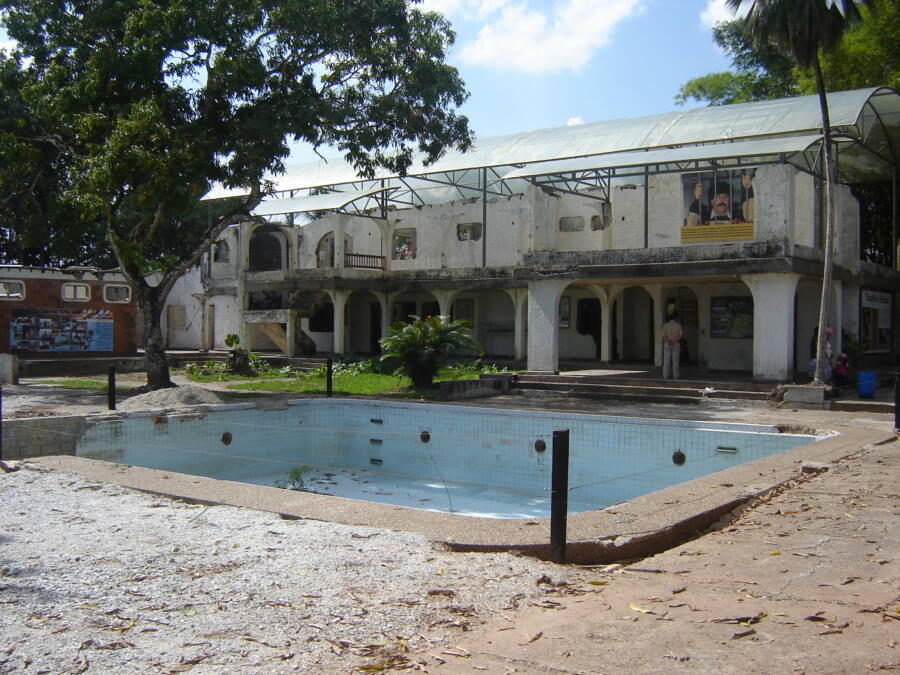 La mujer elefante/FlickrThe ruins of the villa and a swimming pool at the park.

While there have been some efforts to erase the drug lord’s name from the park, tourists still flock to the region because of him. The impact of Escobar lingers, just like his influence on Colombia as a whole.

Between exploring the different habitats of the wild animals on the property and taking a dip in the park’s many aquatic attractions, guests can now visit a Memorial Museum that acknowledges Escobar’s history. They can also see the last remaining ruins from the Hacienda’s heyday.

Escobar’s image is alive and well in this part of Colombia. People have even been caught sneaking into Hacienda Nápoles — for the sole purpose of digging up the lawn in the hopes of finding any treasure that Escobar may have left behind.

Meanwhile, the hippos still roam the property, feral after all of these years. Known for wreaking havoc on the local environment, they’re sometimes viewed as a testament to their previous owner’s legacy.

Their presence — along with the plane replica that stands proud at the entrance — is just another reminder that despite the family-friendly theme park, Hacienda Nápoles only exists because of Pablo Escobar.

After touring the Playboy Mansion-esque Hacienda Nápoles, the extravagant estate of Pablo Escobar, see how the infamous drug kingpin finally met his end in this look at Pablo Escobar’s death. Then, read the story of the female Pablo Escobar, the “Cocaine Godmother” Griselda Blanco.