Exploring Pastafarianism And The Church Of The Flying Spaghetti Monster

The Church of the Flying Spaghetti Monster has some weird rituals, but the founding of Pastafarianism might be the most interesting part.

“I’d really rather you didn’t build multimillion-dollar synagogues/churches/temples/mosques/shrines to [His] Noodly Goodness when the money could be better spent ending poverty, curing diseases, living in peace, loving with passion and lowering the cost of cable.”

Thus begins the “Eight I’d Really Rather You Didn’ts,” the code by which people known as Pastafarians live. Pastafarians are, of course, the devout followers of the Church of the Flying Spaghetti Monster, a very real, very legitimate religious organization. 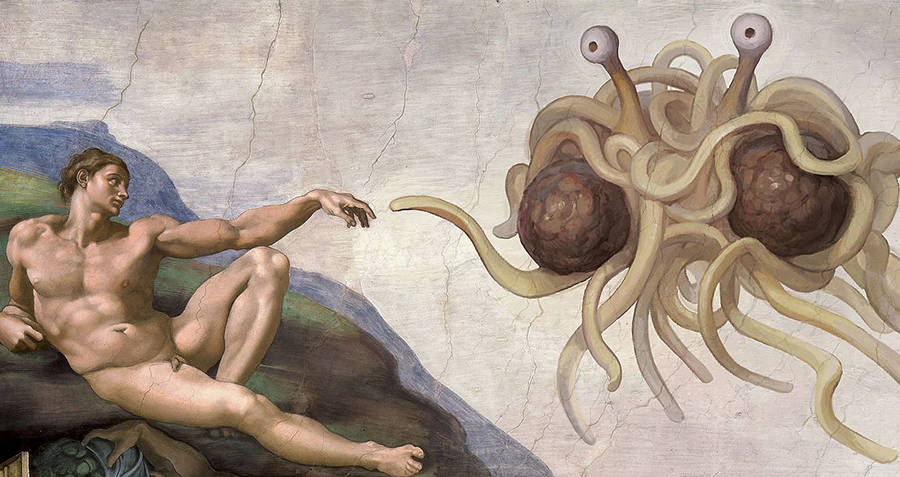 Wikimedia CommonsTouched By His Noodly Appendage, a parody of The Creation of Adam.

Founded in 2005 by 24-year-old Bobby Henderson, the initial goal of the Church of the Flying Spaghetti Monster was to prove to the Kansas State Board of Education that creationism should not be taught in public schools.

In an open letter to the board, Henderson satirized creationism by offering his own belief system. He claimed that whenever a scientist carbon-dated something a supernatural deity known as His Noodly Goodness, a ball of spaghetti with two giant meatballs and eyes, is there “changing the results with His Noodly Appendage.”

His point, no matter how frivolous it sounded, was that evolution and intelligent design should be given equal time in science classrooms.

“I think we can all look forward to the time when these three theories are given equal time in our science classrooms across the country, and eventually the world; one-third time for Intelligent Design, one-third time for Flying Spaghetti Monsterism, and one-third time for logical conjecture based on overwhelming observable evidence,” the letter read.

When the letter gained no immediate response from the board, Henderson put it online where it effectively blew up. As it became an internet phenomenon, board members began sending their responses, which were for the most part, in his corner. 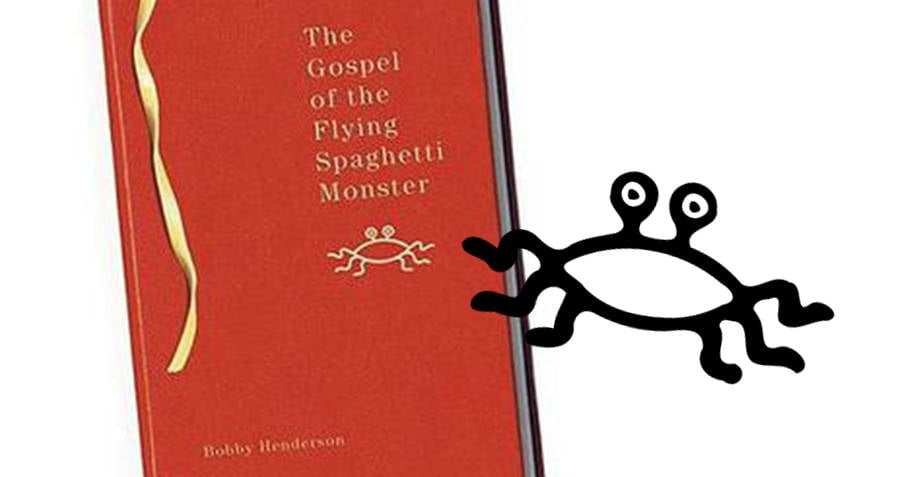 Wikimedia CommonsThe gospel, along with the religions iconography, a play on the Christian fish symbol.

The Gospel of the Flying Spaghetti Monster, like other religious texts, outlines the tenets of Pastafarianism, though usually in a way that satirizes Christian religion. There is a creation myth, a description of holidays and beliefs, a concept of the afterlife, and of course, several delicious pasta puns.

The creation story begins with the creation of the universe, just 5000 years ago, by an invisible and undetectable Flying Spaghetti Monster. On the first day, he separated water from the heavens. On the second day, getting tired of swimming and flying, he created land – most notably the beer volcano, the central fixture in the Pastafarian afterlife.

After indulging in his beer volcano a little too much, the Flying Spaghetti Monster drunkenly created more seas, more land, Man, Woman, and the Olive Garden of Eden. 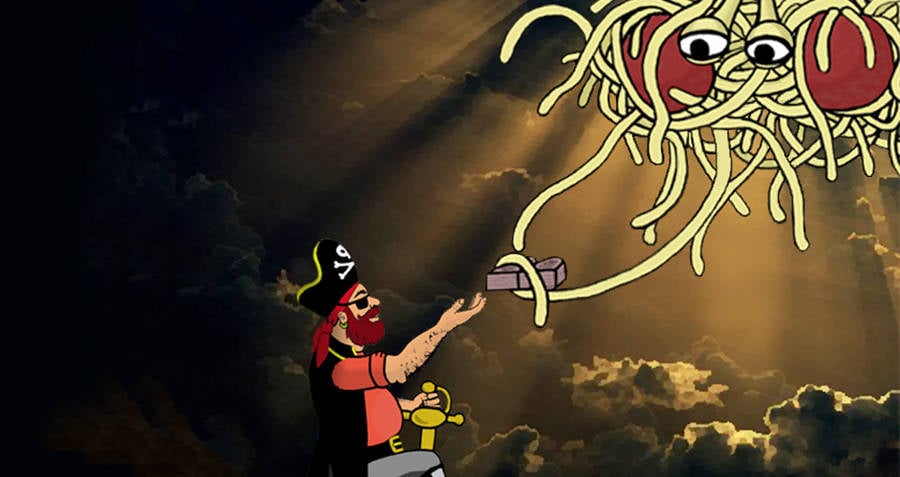 After creating his delicious world, The Flying Spaghetti Monster decided that his people, named Pastafarians after His Noodly Goodness, needed a set of guidelines by which to live to reach the afterlife. An afterlife that he highly encouraged attempting to reach, as it includes access to the beer volcano, as well as a stripper factory. The Pastafarian version of hell is pretty much the same, though the beer is flat and the strippers have STDs.

So, to receive these guidelines, Mosey the Pirate Captain (because Pastafarians most notably started out as pirates), traveled up to Mount Salsa, where he was given the “Ten I’d Really Rather You Didn’ts.” Unfortunately, two of the 10 were dropped on the way down, so ten became eight. The dropping of these two rules is, allegedly, what caused Pastafarians’ “flimsy moral standards.”

Holidays in Pastafarianism are also covered in the gospel, which decrees every Friday a holy day and the birthday of the man who created instant Ramen noodles a religious holiday.

Despite the utter ridiculousness of the Church of the Flying Spaghetti Monster as a whole, the religion has received actual recognition as a religion. There are hundreds of thousands of followers worldwide, mostly centralized in Europe and North America and almost entirely opponents of intelligent design.

In 2007, talks about the Flying Spaghetti Monster were offered at the American Academy of Religions annual gathering, which analyzed Pastafarianism’s basis for functioning as a religion. A panel was also offered to discuss the merits of the religion.

Pastafarianism and the Church of the Flying Spaghetti Monster are often brought up in religious disputes, especially when the disputes regard the teaching of intelligent design. It has succeeded in halting efforts to teach creationism over evolution in several states, including Florida. 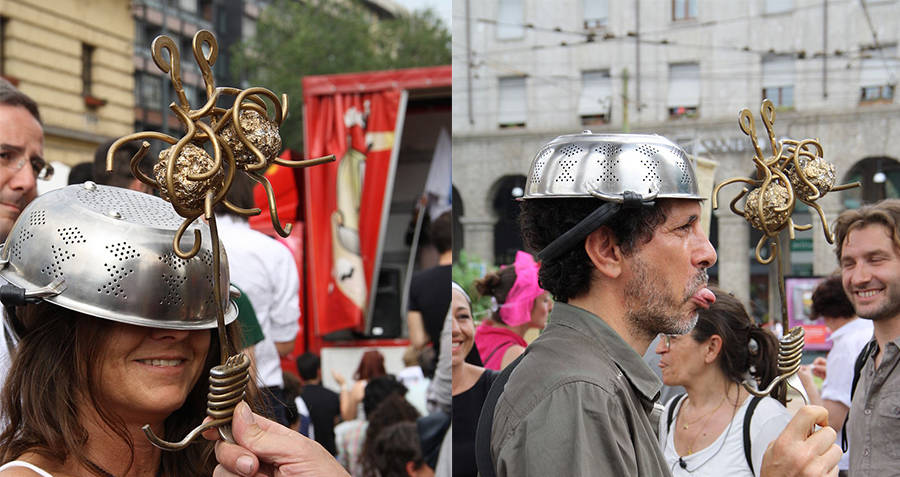 Since 2015, Pastafarian rights are also recognized.

A Pastafarian minister in Minnesota won the right to officiate weddings after he complained that not allowing him to do so would be considered discrimination against atheists.

Official individual recognition has also been allowed by the government. In official identification photos, such as a driver’s license, Pastafarians retain the right to wear an upside-down colander as a hat, and military members can list “FSM” for “Flying Spaghetti Monster” as their religion on their dog tags.

Though there have been critics of his work over the years, Henderson believes that his original intent still shines through to all who join Pastafarianism. The organization started out as a way to show that religion shouldn’t interfere in government, and indeed, it has been used to prove the point again and again.

Enjoy this article on Pastafarianism and the Church of the Flying Spaghetti Monster? Next, check out these unusual religious beliefs. Then, read about the strange rituals of the Church of Scientology.