A Postman’s Dedication: The Pebble Castle of Ferdinand Cheval

In a project that lasted over 30 years, postman Ferdinand Cheval built a massive pebble castle using materials that he found during his daily mail route. 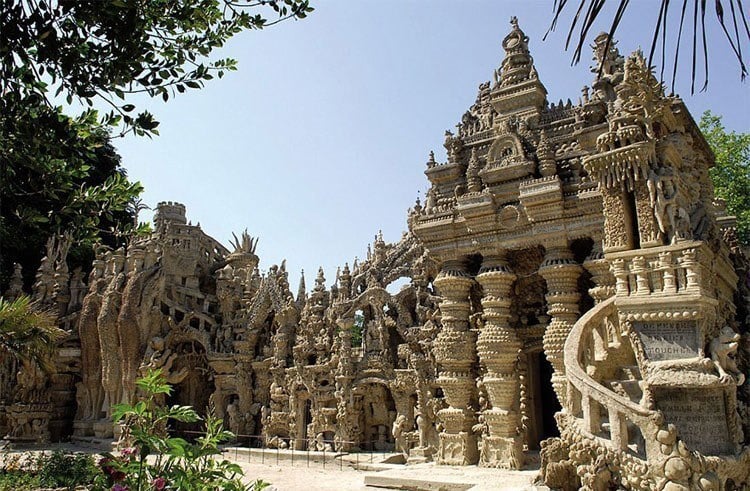 Building a castle is a monumental undertaking any way you look at it. But constructing an entire castle pebble by pebble, stone by stone, using only materials found while making your mail route? That’s absolutely inconceivable. Yet that is exactly what Ferdinand Cheval did, and more than 100 years later his pebble castle still stands, drawing tourists from around the world to Hauterives, France. 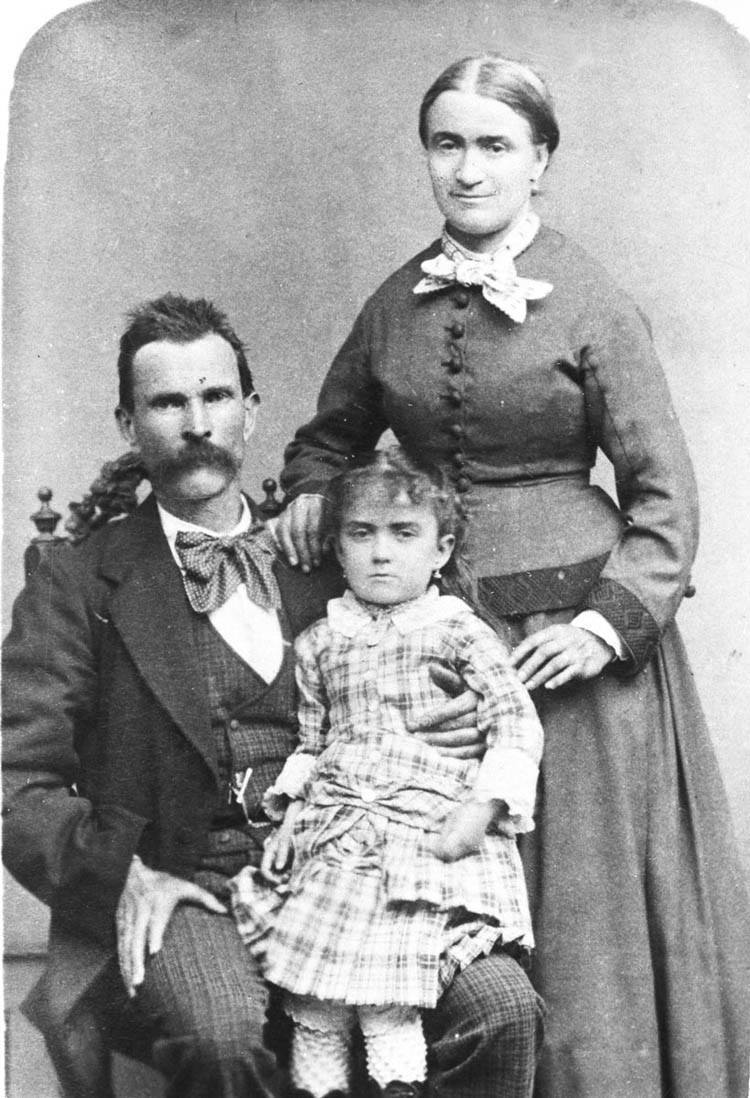 The entirely outlandish castle construction began when Cheval literally tripped on a bizarre-looking stone during his daily mail route. He took the stone home with him, sparking an idea that would consume him for the next three-plus decades.

When speaking of the project, Ferdinand Cheval recounted,

“I was walking very fast when my foot caught on something that sent me stumbling a few meters away, I wanted to know the cause. In a dream I had built a palace, a castle or caves, I cannot express it well… I told no one about it for fear of being ridiculed and I felt ridiculous myself. Then fifteen years later, when I had almost forgotten my dream, when I wasn’t thinking of it at all, my foot reminded me of it. My foot tripped on a stone that almost made me fall. I wanted to know what it was… It was a stone of such a strange shape that I put it in my pocket to admire it at my ease.” 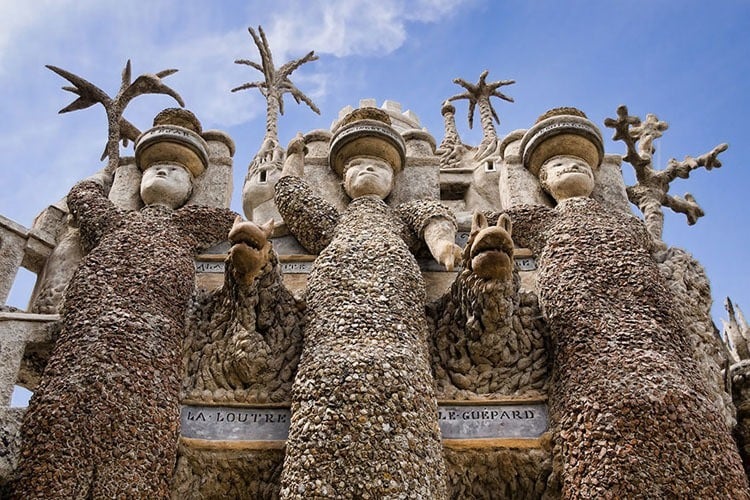 Cheval began picking up pebbles along his 18-mile mail route, filling his pockets by the end of each day’s journey. When his wife became tired of having to mend his pants pockets on a regular basis, he began carrying a basket with him to collect materials. Eventually construction called for larger pieces of stone, so Ferdinand Cheval began taking a wheelbarrow with him to work each day, retrieving and wheeling around the stones that were too heavy to carry. 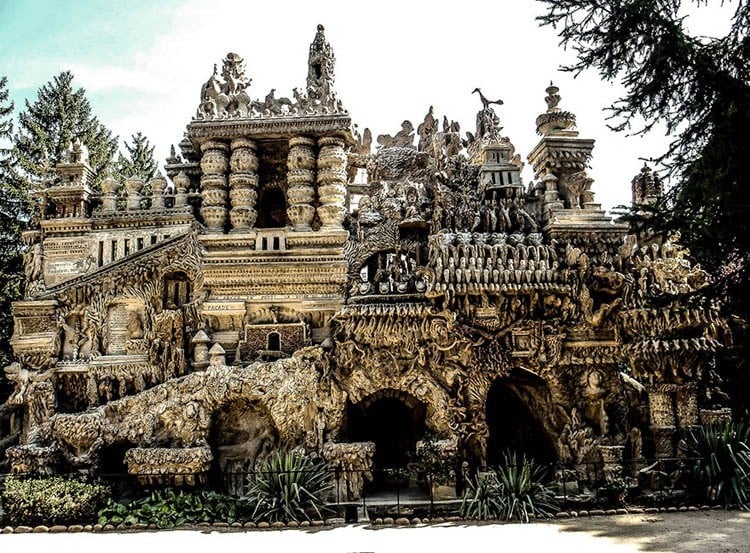 Construction on the massive structure (aptly named Le Palais ideal) began in April of 1879, and the labor of love was completed 1912. It stands as a tribute to the power of artistic endeavor and determination. 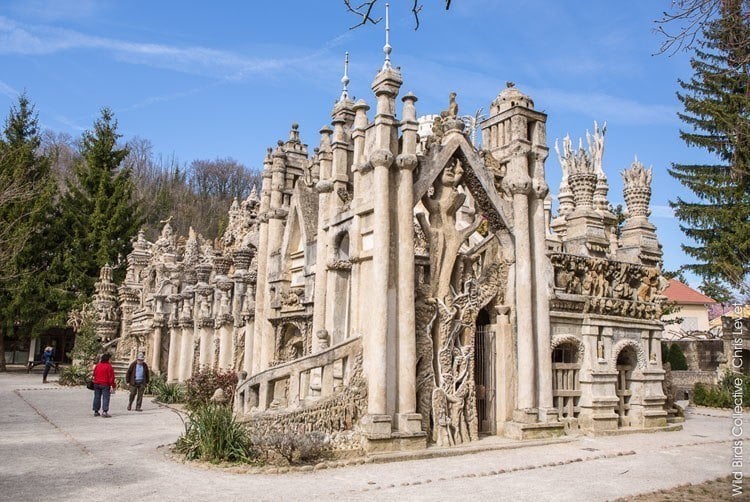 Over the years, Cheval reflected on the pebble castle frequently. To him, the castle “represents a sculpture so strange that it is impossible for man to imitate, it represents any kind of animal, any kind of caricature.” In fact, to Cheval, it’s almost as if he’s finishing a project that Nature started. “I said to myself: since Nature is willing to do the sculpture, I will do the masonry and the architecture.” 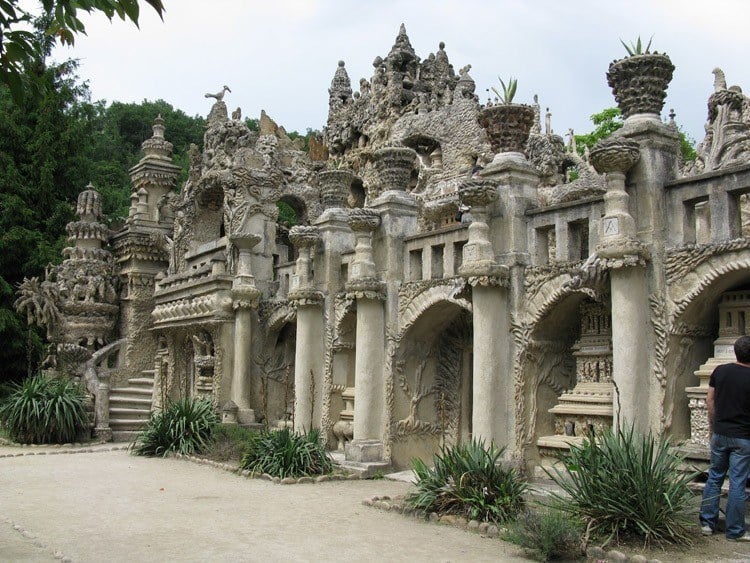 The pebble castle consists of many different styles and influences, spanning from Hinduism to Christianity—as well as the creativity of the artist’s eye. 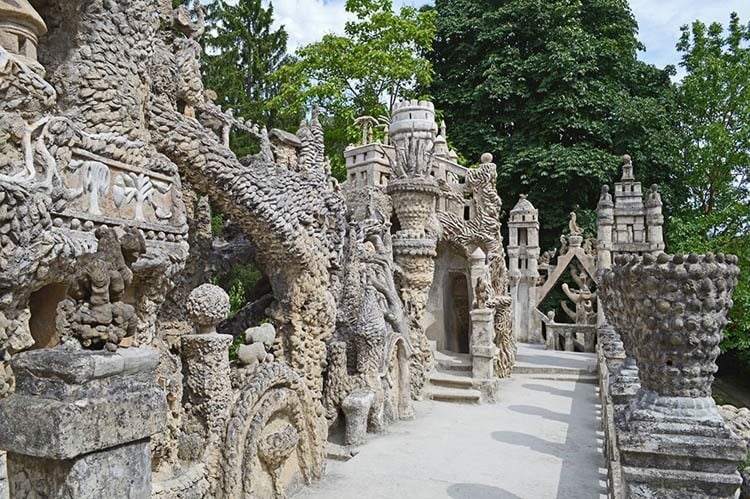 Bound together with lime mortar and cement, the construction has shown a remarkable resilience to erosion and decay. These days, Cheval’s pebble castle often plays host to grand concerts and artistic exhibitions. He probably could not have imagined that his creation would become a landmark of such cultural and artistic influence within France. 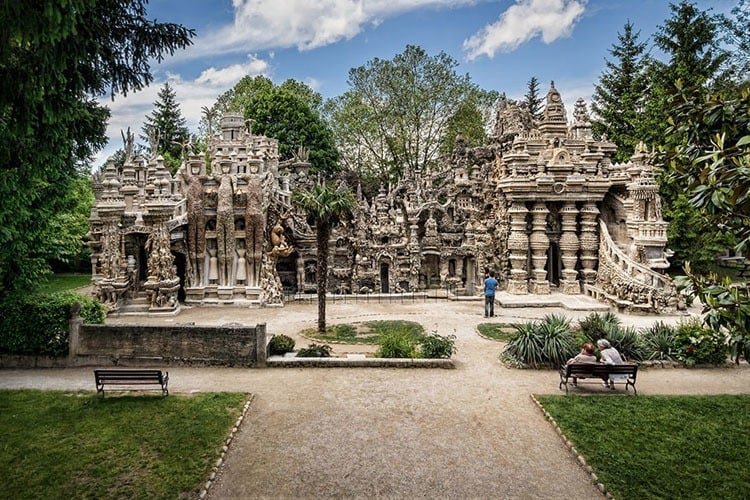 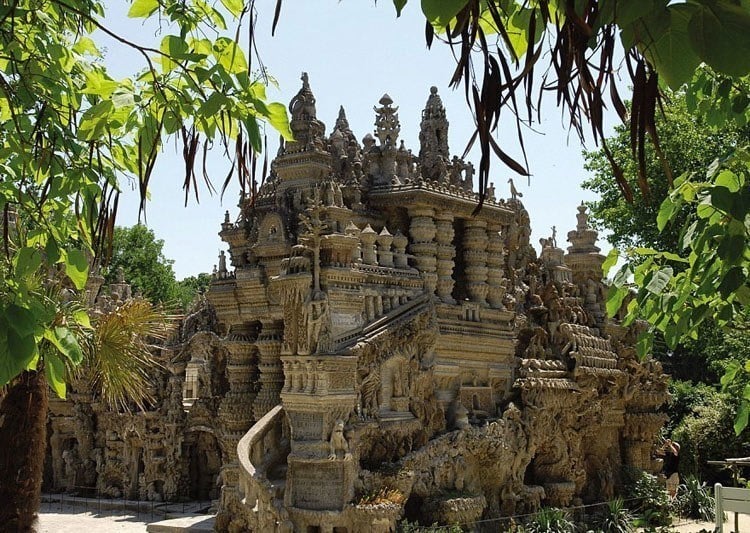 When looking at the building’s exterior, it’s easy to imagine that you’ve stumbled across the castle of a lost civilization. 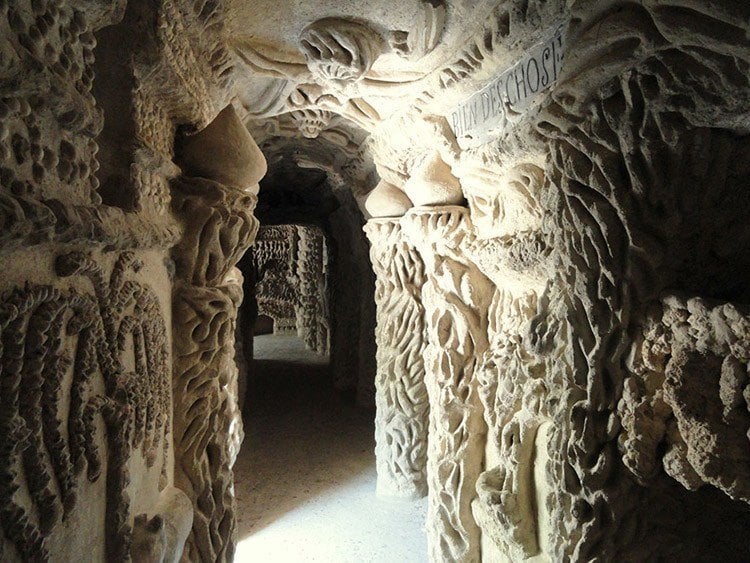 The inner halls and rooms of the great palace are just as intricately designed and executed as that of the interior. 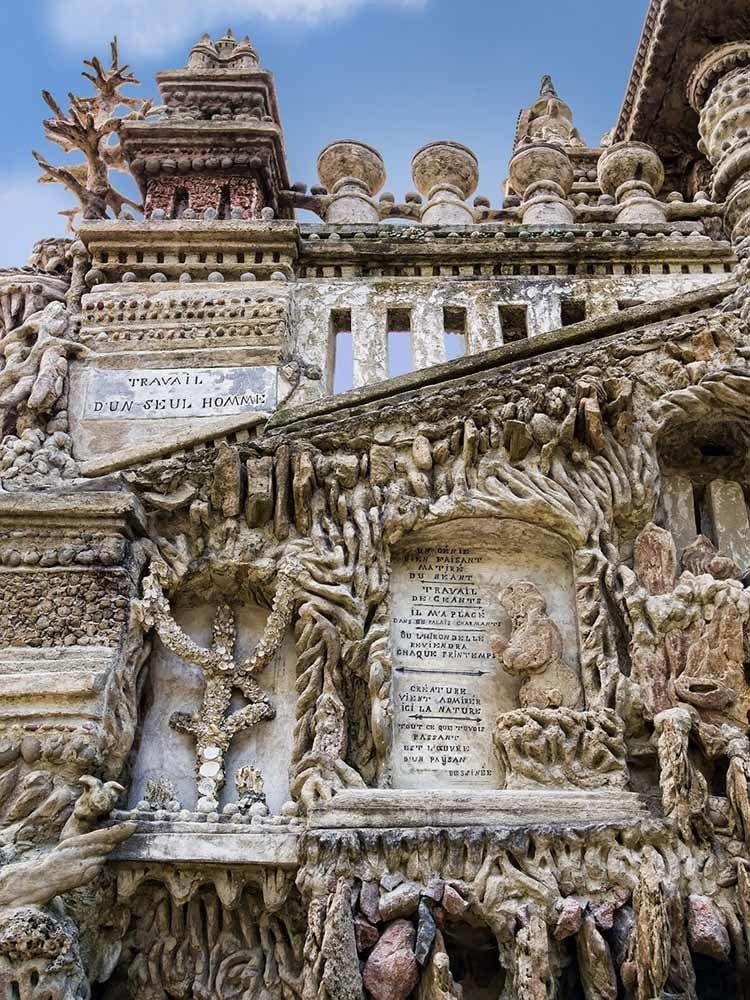 The outer surfaces are adorned with various stone plaques and figures. Many of the figures and animals incorporated into the design were inspired by images on postcards and magazines that Ferdinand Cheval delivered during the course of his work day. 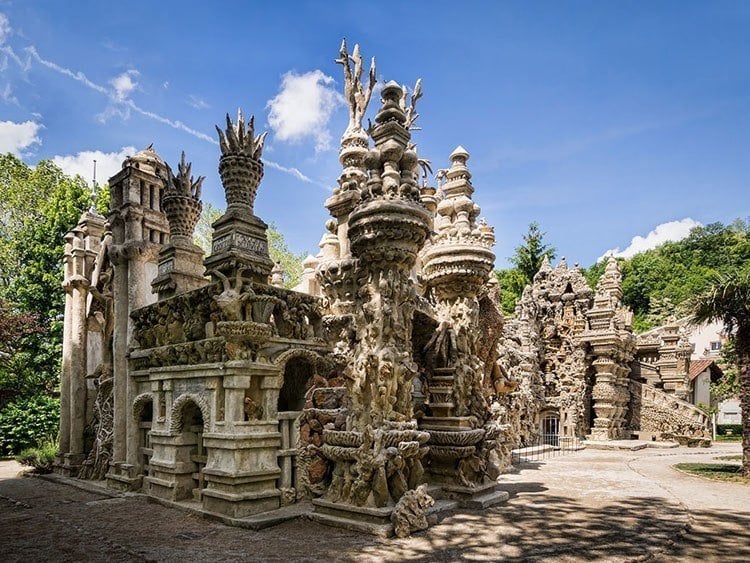 Toward the end of his life, Cheval gained recognition and praise from the likes of André Breton and Pablo Picasso, and his work was also the subject of an essay by Anaïs Nin. Le Palais ideal became a protected landmark in France in 1969. 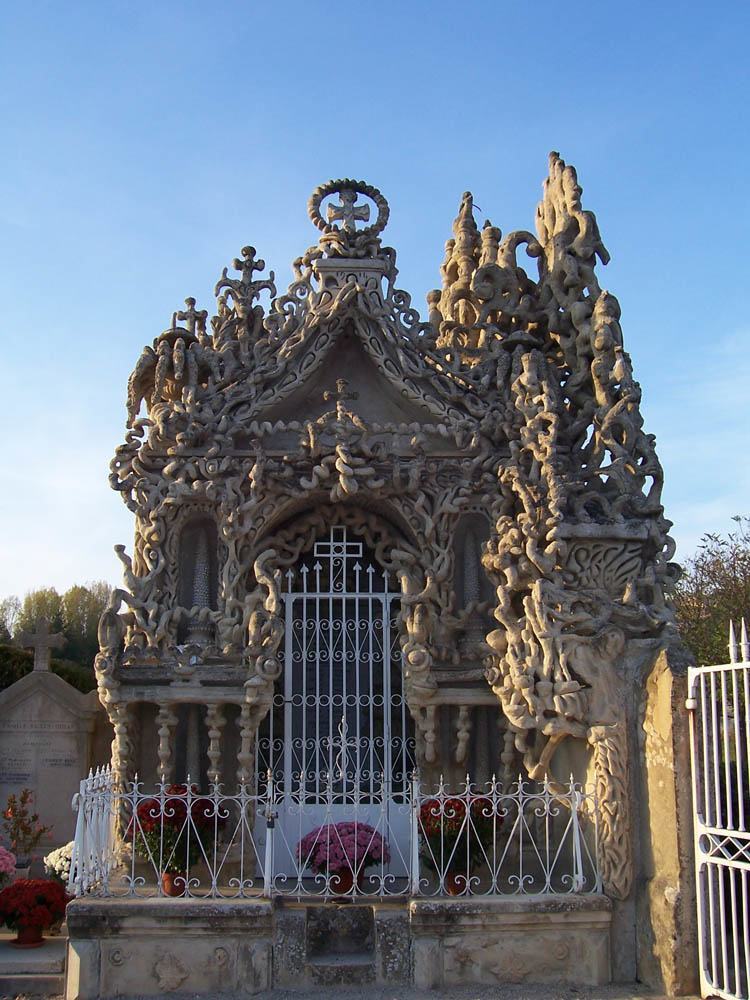 Cheval wanted to be buried in the pebble castle he had dedicated so much of his life to creating, however French law did not allow him to make the dream a reality. Cheval would spend an additional eight years building his mausoleum in Hauterives cemetery. He died in August of 1924, one year after completing his own final resting place.