Ezra James said that he feared that the animal would bite him, so he trapped the raccoon, poured gasoline on it, and then set it on fire. 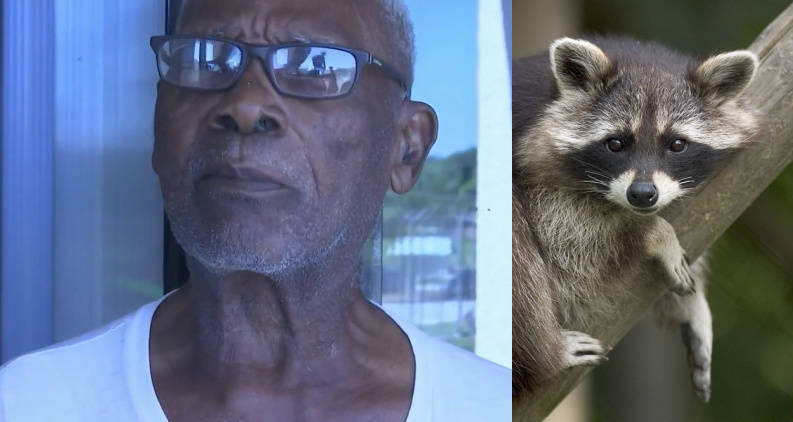 The infamous “Florida Man” is making headlines once again, and this time it’s an 88-year-old Palm Bay resident who was arrested last week after burning a raccoon alive because it ate his mangoes.

Ezra James feared that the raccoon would bite him and give him rabies, so he trapped the animal in a metal cage, threw gasoline on him, lit a match, and set the raccoon on fire.

“88-years-old, first time I ever have to go to jail,” James said to WKMG. “I never thought about killing nobody in my lifetime. No man, no woman, no kid.”

After seeing what James did to the animal, one of his neighbors called the police. When they arrived on the scene, they were forced to shoot the animal in order to put it out of its misery. James said that he didn’t know that the authorities would have humanely euthanized the raccoon if he would have called them about it.

James was released on Aug. 17 after he posted $2,000 bond for his charge of animal cruelty resulting in death. James told WKMG that the neighbor who called the police on him is a “wicked woman” and that he will not apologize to them for his actions.

Nancy Gill, one of James’ neighbors, told WKMG that she would not expect him to ever commit such an act.

“I never would have believed he would have done that,” she said. “I sure hope he thinks about it because God don’t want us to do stuff like this.”

Another neighbor, Ana DeJesus, added she thinks that James might have burned the raccoon because of mental problems.

“Maybe the man is losing it to do something like that,” she told WKMG.

Unfortunately, the tale of this raccoon isn’t the only story of cruelty against animals in the Sunshine State lately.

On August 20, the Creekside Animal Hospital in Fleming Island announced that one of their alpacas had died after eating a lethal amount of junk food. An unknown man fed the animal three boxes of animal crackers, one large bag of Doritos, two large boxes of Cheese Nips, and two whole bags of peanuts, which caused the animal to overindulge and suffer from a fatal case of endotoxemia.

Also, on Aug. 7 Sean Booth, a resident of Marathon, Fla., was arrested for animal cruelty after police say he picked up a dog and “slammed the dog to the ground from the top of a set of stairs.” As a result of the attack, the animal suffered multiple fractures to its pelvis and nerve damage.

Let’s hope that the next installment in the never-ending “Florida Man” series won’t result in the death or severe injury of any more innocent animals.

Now that you’ve finished reading about the tragic end of the mango-stealing raccoon, check out the town of Vernon, Fla., a.k.a. “Nub City,” where residents cut off their own appendages for insurance money. Then read about the Florida man who was arrested for attempting to “barbeque” child molesters.