The Mysterious Footballfish, The Nightmarish Deep-Sea Creature That’s Never Even Been Seen Alive

A number of extremely rare Pacific footballfish have washed up in California in 2021, both puzzling and delighting curious scientists. 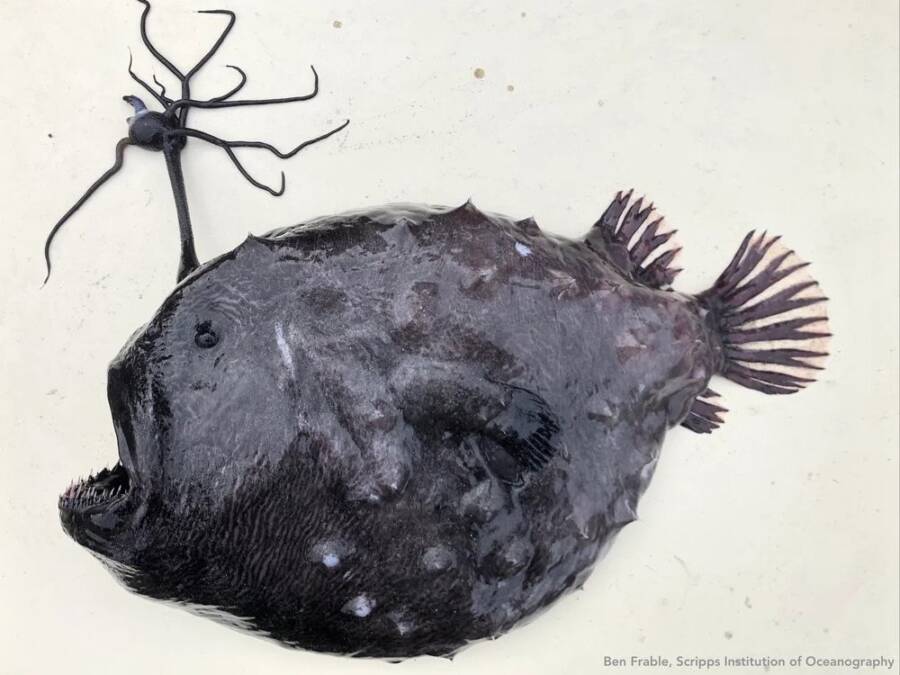 In the past century, just 31 footballfish have been found by humans. That’s because these elusive anglerfish swim at depths of up to 3,300 feet, their path illuminated by the bioluminescent bulbs swinging from their heads.

But this year alone, three of these rare fish have washed up in California. Though scientists are thrilled at the chance to study these rare specimens, they aren’t entirely sure why these fish are suddenly appearing from the deep.

So, just what are Pacific footballfish? And why are they now showing up in California?

Inside The Mysterious Existence Of The Pacific Footballfish

Pacific footballfish, or Himantolophus sagamius, lurk in the depths of the Pacific Ocean. Just a handful of specimens have been found in New Zealand, Japan, Russia, California, Hawaii, Ecuador, and Chile. 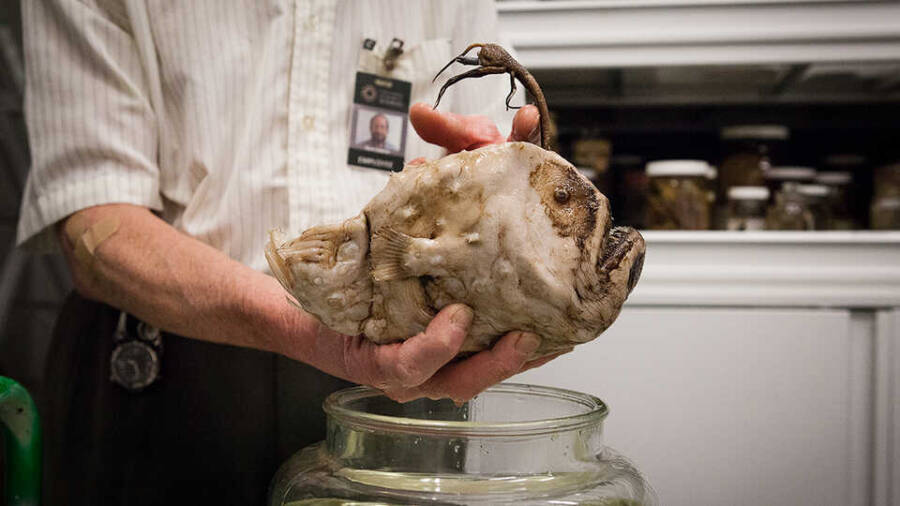 That’s because footballfish generally cruise at a depth of 1,000 to 3,300 feet. Though the waters that deep are pitch black, the footballfish shines a tiny light from a phosphorescent bulb (or esca) on its forehead.

The fish uses this light to attract prey — but scientists don’t think they’re picky when it comes to mealtime. Because food in the depths of the ocean can be scarce, footballfish have evolved to eat whatever they can catch.

They lurk in the dark, waiting for fish, squid, or crustaceans to cross their paths. Then, they strike. Footballfish pull their prey into their mouths, where their impressive, needle-sharp teeth shred the unlucky sea creature to bits. 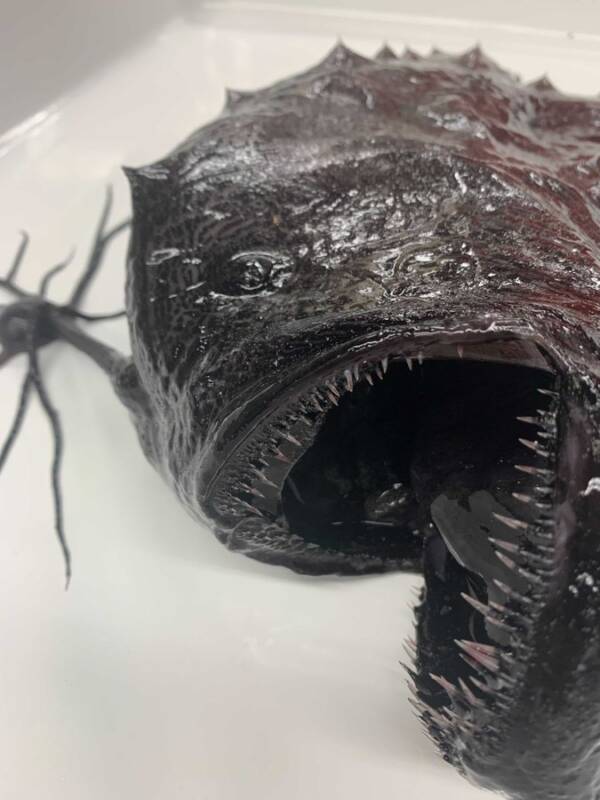 Scripps Institution Of OceanographyThe footballfish use their terrifying teeth to subdue their prey.

But it’s only females that hunt. Up to three feet long, they’re about 10 times larger than males. In fact, scientists say that male footballfish are merely “sexual parasites” that fuse themselves to females.

Over time, the male fish lose their eyes and internal organs. Retaining only their testes, they cling to the female fish, providing her with a steady source of sperm in exchange for nutrients.

These fish are bizarre and fascinating deep-sea creatures. However, because they swim so deep, scientists rarely have the chance to examine them closely.

That’s why many ichthyologists — or fish experts — are thrilled that three footballfish have washed up in California. So what exactly have scientists found? And why are these elusive fish suddenly washing up on the beach?

Why Are Footballfish Washing Up In California?

In 2021, a number of footballfish washed ashore in California. One appeared in Newport Beach’s Crystal Cove State Park in May; a second one washed up at Black’s Beach in November, and a third appeared along the shores of San Diego in December. 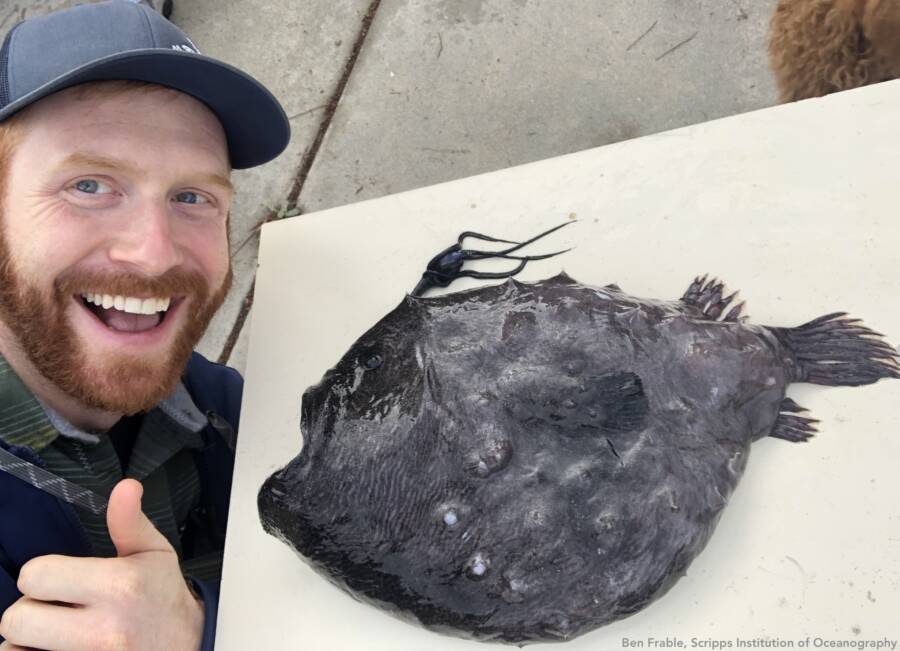 “It is pretty amazing that we’ve had three just in the past year and in Southern California alone,” said Ben Frable, the Collection Manager of Fishes at Scripps Institution of Oceanography.

Calling the find “serendipitous,” he added, “Because before that, the last time it happened in California, at least that we were aware of, that somebody saw and brought to scientists was 20 years ago today.”

Until this year, a footballfish had not washed ashore in California since 2001.

The fish found in December, Frable continued, was a female that stretched about 15 inches and weighed an impressive five and a half pounds. The specimen appeared to be in good shape, though it looked like a seagull had taken a bite from the fish at some point, and Frable found sand in its belly.

Why sand? Scientists aren’t sure. Other footballfish have been found with empty stomachs.

“There’s a lot we don’t know about this species in general,” explained William Ludt, the assistant curator of the ichthyology collection at the Natural History Museum, where one of the footballfish was displayed.

Frable seconded that. “We don’t know a lot about even the basics of how they live,” he said. “There’s still just all these questions. And I think that’s what makes it really fascinating especially to study these deeper water species that occur just out in the open ocean.

Indeed, California fish experts are atwitter over the find and are hopeful that the footballfish specimens can shine a light on how these rare creatures live. For now, however, they aren’t even sure why the fish died or why so many are washing ashore.

“It is very strange, and it’s the talk of the town among us California ichthyologists,” remarked Lundt.

Frable doesn’t think that the sudden spate of footballfish means anything has gone wrong in the ocean depths — if so, he said, there would probably be many more Pacific footballfish washing ashore. But he’s not sure why so many have ended up on Southern California beaches up this year.

“Unfortunately, we don’t really know why,” he said. “We have such little information… I’m chatting with colleagues who study coastal oceanography, talking to other colleagues that work on anglerfishes and other fish, and were having a little chat trying to figure out, to come up with any ideas.”

After reading about footballfish, look through these photos of deep-sea creatures. Or, peruse these vintage sea creature drawings.