Excavated at the turn of the millennium, this 72-million-year-old fossil was left gathering dust in storage for a decade. It is now one of the most complete baby dinosaurs ever found. 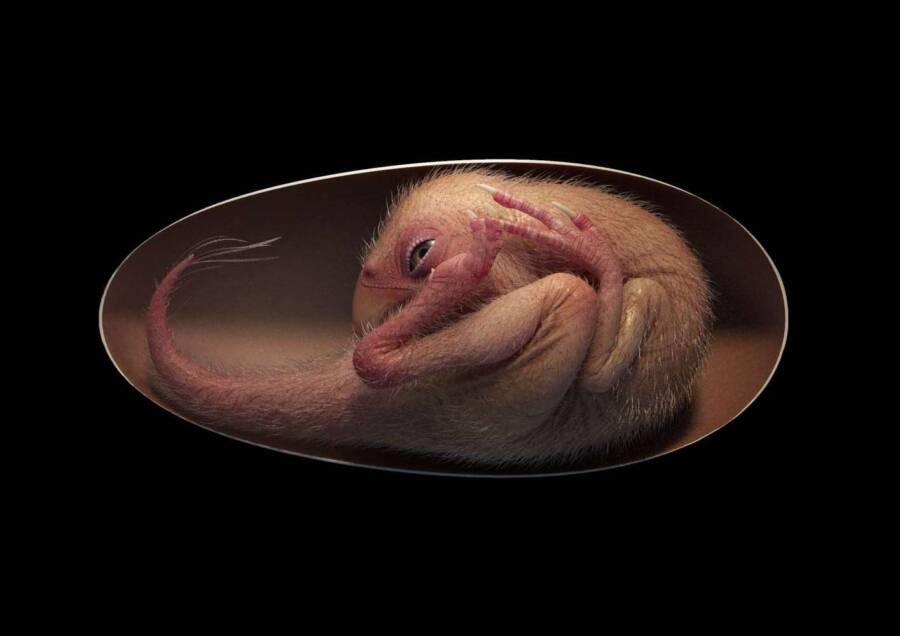 Darla Zelenitsky et. alThe unhatched oviraptorosaur was estimated to be between 66 and 72 million years old.

When workers found the unhatched oviraptorid embryo, it had been sitting in a box for about a decade. The dinosaur was originally unearthed from Chinese soil in 2000 but ended up in storage during construction of a museum. Finally rediscovered, the fossil is now clarifying the link between dinosaurs and modern birds.

Named “Baby Yingliang” after the museum housing it, the fossil is between 66 and 72 million years old. The embryo’s survival itself is remarkable, as baby dinosaur bones are fragile and rarely withstand the rigors of time, according to CNN. As published in iScience, the new study noted it’s one of the most complete dinosaur embryos ever found.

“Most known non-avian dinosaur embryos are incomplete with skeletons disarticulated (bones separated at the joints,” said Waisum Ma, lead author of the study and researcher at the University of Birmingham. “We were surprised to see this embryo beautifully preserved inside a dinosaur egg, lying in a bird-like pose.”

“This posture had not been recognized in non-avian dinosaurs before.” 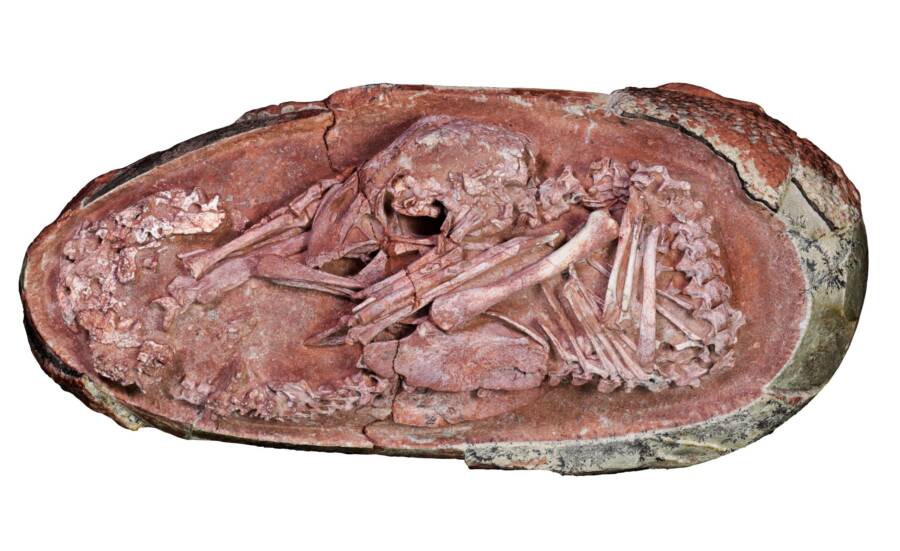 Darla Zelenitsky et. alThe unhatched specimen is one of the most complete baby dinosaur fossils ever found.

Excavated a little over two decades ago in China’s Jiangxi province, the oviraptorid embryo was acquired in 2000 by Liang Liu — the director of a Chinese stone company named Yingliang Group. It was practically tossed aside and forgotten and relegated to a storage bin for 10 years until anyone finally noticed it.

It was then that staff rediscovered the fossil during the construction phase of Yingliang Stone Nature History Museum in the city of Xiamen. According to IFL Science, the curled-up creature has been measured at 10.6 inches long from head to tail while the fossilized egg itself is only seven inches in length.

Had it hatched, the dinosaur would’ve been a feathered, toothless theropod and grown to 6.5 to 9.8 feet. Remarkably, this dinosaur embryo is the first ever found showcasing a posture known as “tucking” which birds engage in before hatching and is defined by curving the body while keeping the head under their wing.

Theropods comprise a group of bipedal dinosaurs such as the Tyrannosaurus rex and velociraptors. All modern birds have directly evolved from this carnivorous group, For study co-author Darla Zelenitsky, an associate professor at the University of Calgary, the ramifications of this find are staggering. 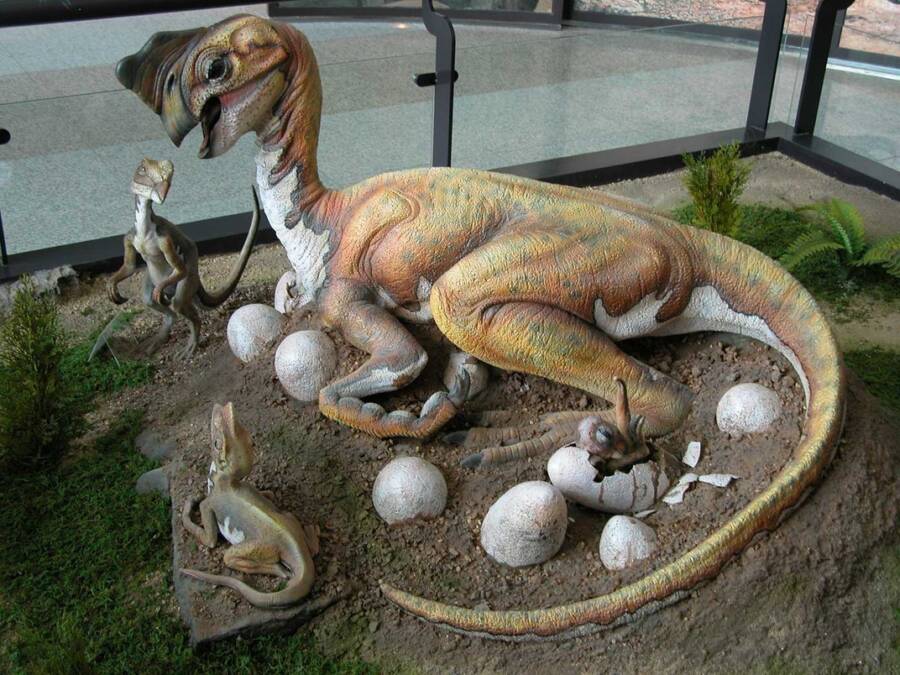 Darla ZelenitskyA display showcasing an oviraptorid watching over its eggs.

“It is an amazing specimen,” she said. “I have been working on dinosaur eggs for 25 years and have yet to see anything like it. Up until now, little has been known of what was going on inside a dinosaur’s egg prior to hatching, as there are so few embryonic skeletons, particularly those that are complete and preserved in a life pose.”

Controlled by the central nervous system, tucking is biological and vital for birds to successfully hatch. While this is on full display here and giving experts much to study, this pre-hatching behavior isn’t the only activity inherited from dinosaurs by birds — as their prehistoric ancestors sat on their eggs to incubate them, as well.

Written by researchers from China, Canada, and the United Kingdom, the fascinating new study practically provided evidence-based conclusions that dinosaurs moved and changed poses in their embryos just like baby birds did. Remarkably, the evolutionary origins of tucking had never been fully understood until now.

As the study described, Baby Yingliang was found with its head “ventral to the body, with the feet on either side, and the back curled along the blunt pole of the egg.” The authors stated that the was “previously unrecognized in a non-avian dinosaur, but reminiscent of a late-stage modern bird embryo.” 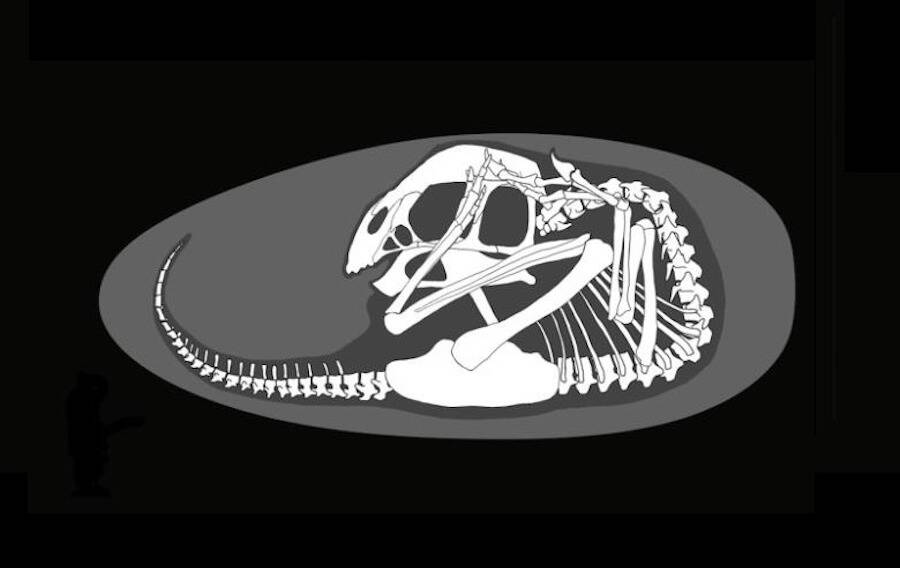 Darla Zelenitsky et. alA skeletal clarification of the specimen.

“This little prenatal dinosaur looks just like a baby bird curled in its egg, which is yet more evidence that many features characteristic of today’s birds first evolved in their dinosaur ancestors,” said co-author Steve Brusatte, an American paleontologist and evolutionary biologist at the University of Edinburgh.