The Story Of Franz Reichelt, The Man Who Died Jumping Off The Eiffel Tower

Inventor Franz Reichelt had so much confidence in his homemade parachute that he tested it in front of a crowd at the Eiffel Tower — but his hopes were immediately dashed. 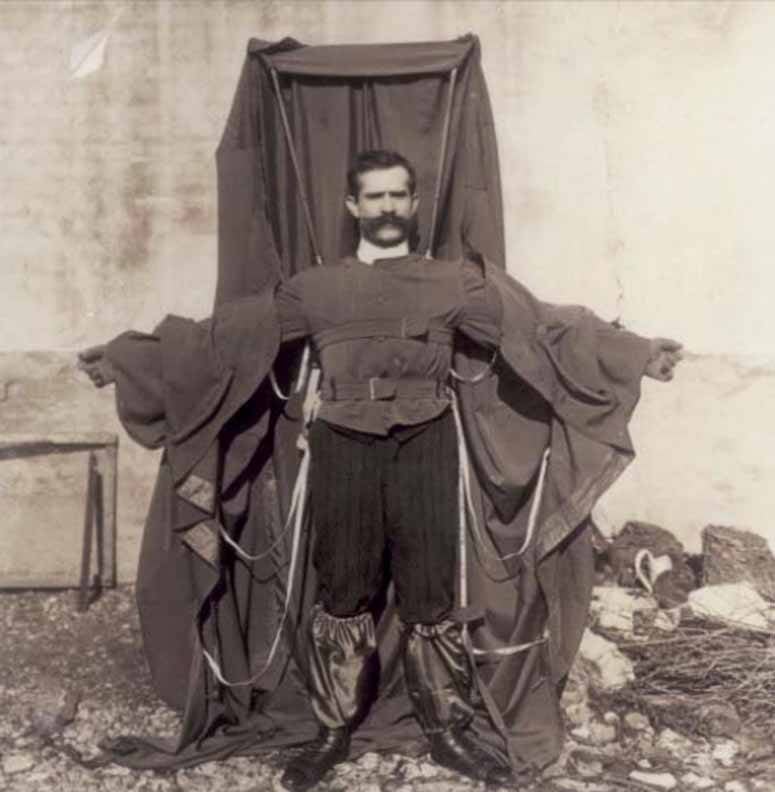 They say “pride cometh before the fall.” In few circumstances can this be applied so literally as in the case of parachute inventor Franz Reichelt.

Reichelt, an Austrian-born tailor living in France at the turn of the century, watched the rapid development of early airplanes with fascination. But as he read stories about plane crashes, he became determined to help. The tailor began to develop a “parachute suit.”

He imagined something light enough that a pilot could wear it, and hardy enough that it could save the pilot’s life. But although Franz Reichelt developed his invention with enthusiasm, early prototypes failed miserably.

Dummy after dummy — tossed from Reichelt’s Parisian apartment — plummeted straight to the Earth. Yet Reichelt became convinced that the problem lay not in his invention, but in how he had tested it. He believed he needed to test it from a greater height.

The Eiffel Tower offered exactly that. On Feb. 4, 1912, Reichelt summoned friends, journalists, and cameramen to watch him triumphantly leap from the Eiffel Tower’s first platform. But things didn’t go according to plan.

Listen above to the History Uncovered podcast, episode 30: Franz Reichelt, “The Flying Tailor,” also available on iTunes and Spotify.

The Tragic Story Of Franz Reichelt And His Parachute Suit

Born in 1878 in Austria, Franz Reichelt later established himself in France as a successful tailor. But with his Austrian clients, he was only know to talk about one thing — parachutes. Specifically, his parachute suit.

Though functional fixed-canopy parachutes already existed, and a parachute had already been invented that worked for high altitudes, no parachute existed for people leaping from planes or at low altitudes.

“My new invention is like nothing else,” Reichelt told Le Petit Journal. “It’s constructed, basically, half in waterproof fabric and half in silk…thanks to a system of rods and belts that one can control, the ‘parachute’ deploys during a fall and will save [a pilot’s] life.”

Indeed, Reichelt’s early experiments in 1910 went fairly well. But he needed to make the parachute more wearable for the invention to work, and that’s where he ran into problems.

Reichelt’s lighter, more “wearable” suits failed in attempt after attempt. His dummies dropped like a stone to the ground. The inventor even tried one out himself and ended up breaking his leg.

But Reichelt was undeterred. “The suit has not had time to make contact with the air,” he reflected. “If I had fifty or one hundred meters instead of twenty-five, the results would be wonderful. I will prove it, one day.”

He was especially motivated to prove the worth of his invention when the Aéro-Club de France offered a prize of 10,000 francs to anyone who could create a safety parachute for aviators that did not exceed 25 kilograms in weight.

Determined that he needed to launch his parachute from a considerable height to succeed, Franz Reichelt began lobbying the Parisian police to let him test his invention from the Eiffel Tower.

After a year, they finally agreed.

On the cold morning of Feb. 4, 1912, Franz Reichelt arrived at the Eiffel Tower at 7 a.m. But to the abject horror of his friends, he hadn’t brought any dummies with him. He was wearing his parachute suit, and intended to test it himself.

Many of Reichelt’s friends, as well as a security guard working there, tried to convince him not to jump. But Reichelt was unswayed. “I intend to prove the worth of my invention,” he announced.

One French paper, Le Matin, noted that Reichelt’s determination to jump caused ripples of trepidation in the crowd. “Among the spectators… only he seemed happy,” they wrote the next morning. “Everyone thought he would kill himself.”

Another, Le Gaulois, recalled a feeling of faint optimism. “After all,” they wrote, “when it comes to aviation, aren’t we all used to audacity, and to surprises?”

As the crowd below watched, Reichelt made his way up to the first platform of the Eiffel Tower, about 200 feet off the ground. His friends warned him again, saying it was too cold and too windy. A fellow parachutist told Reichelt that his parachute would not have enough time to deploy.

Reichelt dismissed their concerns. “You are going to see how… my parachute will give your arguments the most decisive of denials,” he said.

By 8:22 a.m., Reichelt had reached his position. Stepping up onto a small table next to the edge of the platform, he ripped up a newspaper and studied the direction of the wind. Then, he looked down at the icy ground.

The inventor turned back to his friends. “À bientôt,” he said, meaning “see you soon.” 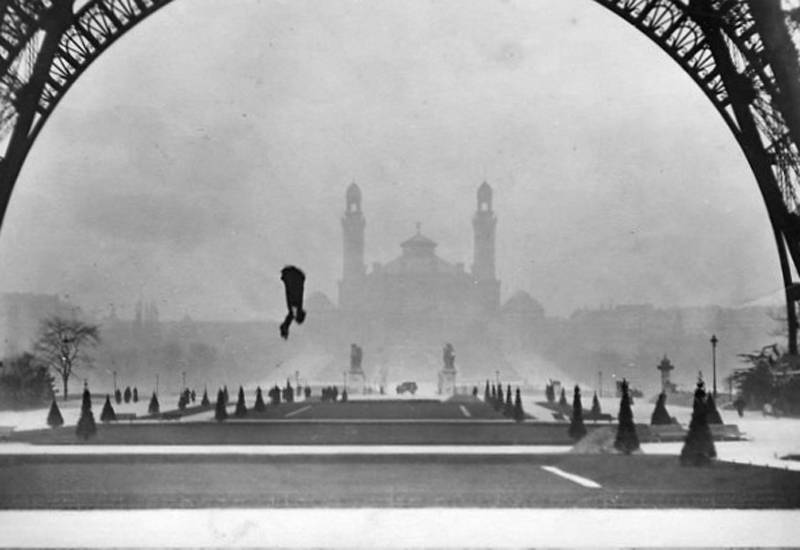 But for forty long seconds, Reichelt hesitated. In footage later made public, a card before Reichelt’s jump reads:

“As if he sensed his horrible fate, the doomed inventor hesitated a long time before jumping into the air.”

Finally, Reichelt propelled himself off the edge of the Eiffel Tower. His parachute promptly folded around him, and he plummeted down to the frozen grass.

“Two seconds later,” the Petit Parisian wrote, “in a pitiful wreck, he lay on the icy grass. He fell almost standing… blood trickled through his mouth, nose, and ears… his right arm and leg were crushed, his skull and back were broken. Death was instant.”

Though police rushed to Franz Reichelt’s side, the 33-year-old tailor had already succumbed to his injuries. His fall had left a six-inch hole in the ground.

“He was dead,” said Le Gaulois the next day. “And there was nothing more to do but carry home the body of this inventor who had believed, just a few seconds earlier, to finally grasp fortune and glory.”

Franz Reichelt’s Sad Legacy In The Wake Of His Death 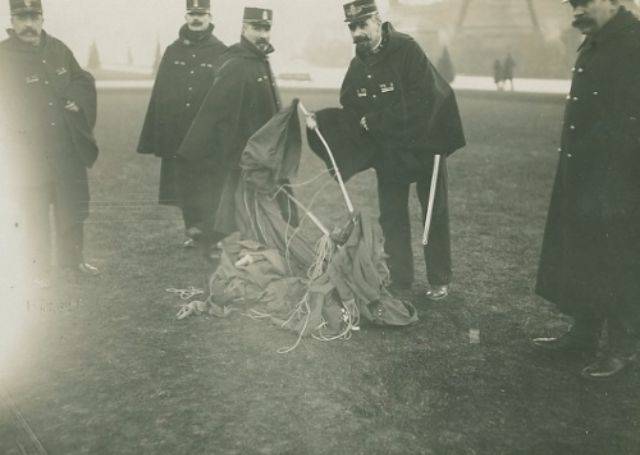 Parisians reacted to news of Franz Reichelt’s death with shock. Many newspapers critiqued the inventor’s bold — and fatal — decisions to jump.

Le Matin called Reichelt a victim of his faith. Le Gaulois mused that as a mad genius, Reichelt deserved “only half that title.”

Others blamed the Parisian police for letting Reichelt jump at all. But the police insisted that they had only given Reichelt permission to test his parachute from the Eiffel Tower because they thought he’d use dummies. They were as surprised as everyone else when he jumped himself.

Perhaps the most tragic aspect of Franz Reichelt’s death is that it may have been in vain. The tailor wanted to save pilots with his invention. But in Russia, an inventor named Gleb Kotelnikov had already invented a knapsack parachute in 1911.

Like Icarus, Franz Reichelt believed he could fly. And like Icarus, he instead crashed down to Earth.

Enjoy this article on Franz Reichelt? Next, check out these surprising Eiffel Tower facts and photos that tell the story you’ve never heard. Then, read up on the most unusual deaths in history.