"Anglo-Saxon crosses of this kind are exceptionally rare, and only one other — much less elaborate — is known from the ninth century." 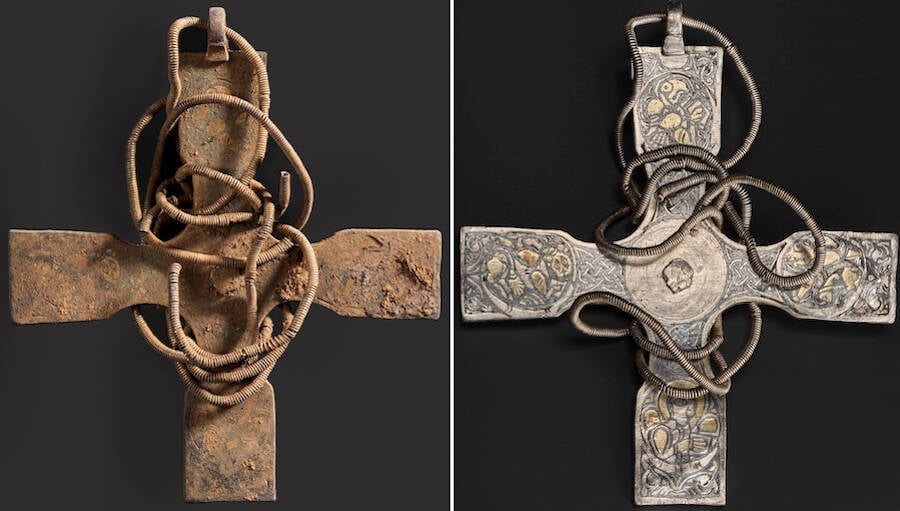 National Museums ScotlandThe cross before (left) and after (right) restoration work began on it in 2017.

In 2014, treasure hunter Derek McLennan made the discovery of a lifetime. Noticing a bit of silver protruding from the dirt in a Scottish field, he and two friends began to dig. What they found was one of the largest troves of Viking-era artifacts in the U.K.’s history — and it included a 1,000-year-old cross that has just now been restored to its former glory.

The artifact is one of more than 100 gold and silver objects that were found that day and has since been acquired and conserved by National Museums Scotland. The historic haul is now known as the Galloway Hoard. 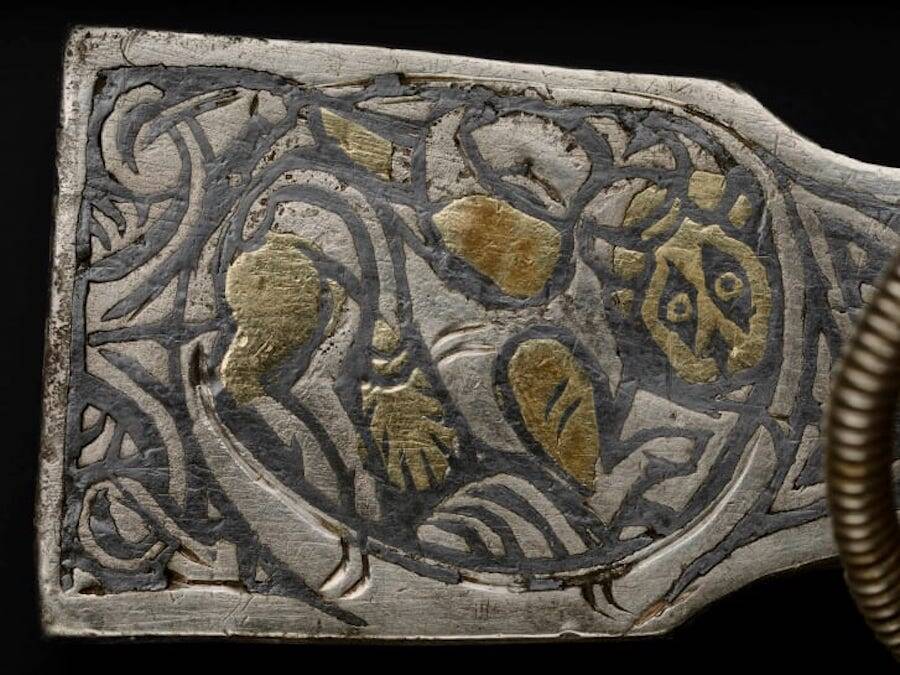 National Museums ScotlandOne of the four arms of the cross, bearing remarkable detail.

“Initially I didn’t understand what I had found,” McLennan told the BBC. “Then I turned it over and wiped my thumb across it and I saw the Saltire-type of design and I knew instantly it was Viking. I went into shock, endorphins flooded my system and away I went stumbling towards my colleagues waving it in the air.”

According to The Smithsonian, the ninth-century cross was made in Northumbria or what is now northern England and southern Scotland and features evangelist symbols as well as gold and black inlays. It was also found with a delicate metal cord wrapped around it.

After careful cleaning, the dirt-encrusted cross yielded engravings of one of the four Gospel writers of the New Testament on each arm: Matthew as a human, Mark as a lion, Luke as a calf, and John as an eagle. 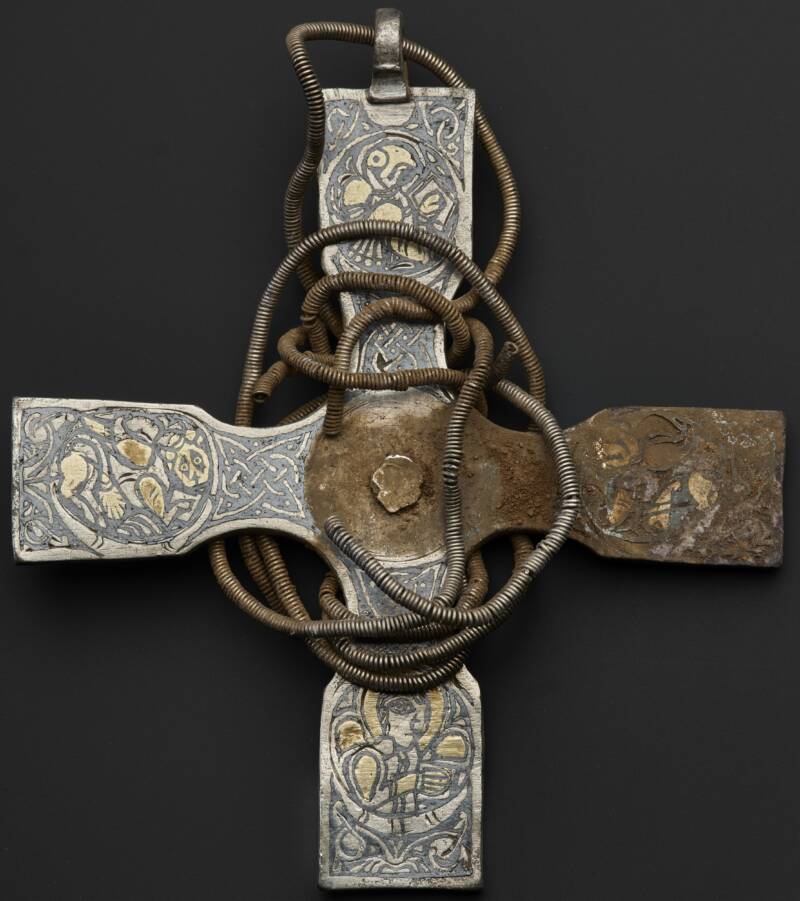 The four Gospel writers, three of which were represented as animals, were decorated in black niello (or metallic alloy) and gold leaf. Remarkably, not a single soul had seen this cross since the ninth century. Experts believe it was purposefully buried with the rest of the relics and was once worn by a cleric or king.

Indeed, Dr. Martin Goldberg, Principal Curator of the Early Medieval and Viking collections, is fairly convinced that whoever owned this particular piece was a high-ranking member of society.

“You could almost imagine someone taking it off their neck and wrapping the chain around it to bury it in the ground,” he said. “It has that kind of personal touch. We imagine that a lot of ecclesiastical treasures were robbed from monasteries… This is one of the [survivors].”

“The pectoral cross…. is an outstanding example of the Anglo-Saxon goldsmith’s art,” added Leslie Webster, who formerly curated the British Museum’s Britain, Prehistory and Europe collection. “The discovery of this pendant cross… is of major importance for the study of early medieval goldsmiths’ work, and for our understanding of Viking and Anglo-Saxon interactions.” 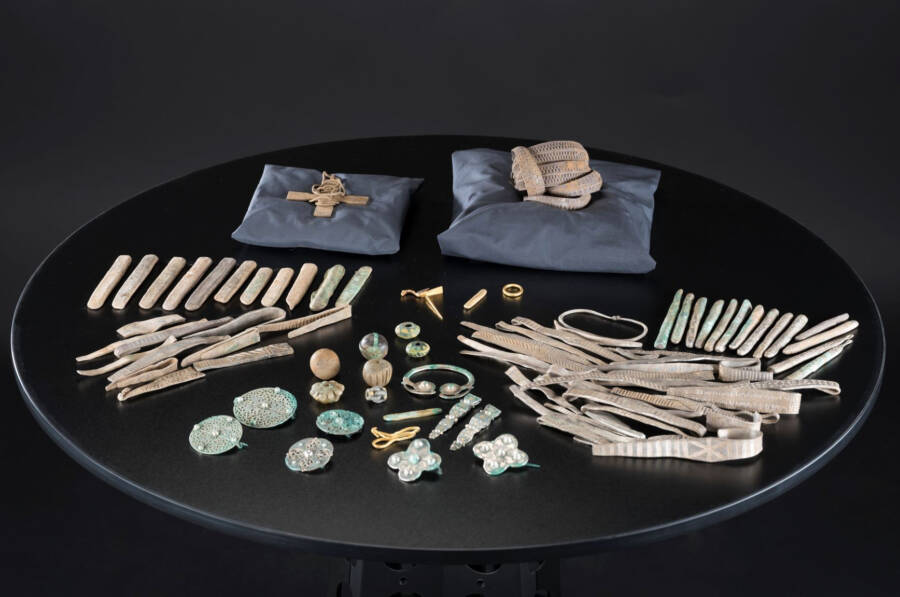 National Museums ScotlandThe Galloway Hoard, uncovered in 2014 and set to be displayed from February to May 2021.

Because of its intricate design, cleaning the relic was no easy task. In order not to damage the item as a whole, researchers needed to improvise. Conservators used a carved porcupine quill, which was “sharp enough to remove the dirt yet soft enough not to damage the metalwork.”

According to National Museums Scotland, the cross will soon go on public display in the “Galloway Hoard: Viking-Age Treasure” exhibit at the Edinburgh Museum from Feb. 21 to May 9, 2021. The exhibit will include other artifacts from the Galloway Hoard, such as silver bracelets, gold rings, pins, and more. But in the end, it’s the cross that remains perhaps the most tantalizing aspect of the exhibit.

“The cross is a wonderfully visual representation of the work we have been doing to reveal new details about the Galloway Hoard,” said Goldberg. “The conservation work lets us see this object clearly for the first time in over a thousand years, but it also reveals a whole new set of questions.”

After learning about the 1,000-year-old Anglo-Saxon cross that was restored to its former glory, read up on these 32 Viking facts that reveal one of history’s most misunderstood civilizations. Then, learn about how this Viking warrior skeleton was discovered to be female.