Gavrilo Princip: The Story Of The Serbian Nationalist Who Assassinated Archduke Franz Ferdinand

On June 28, 1914, Gavrilo Princip fired two shots that would change the course of history, sentencing 40 million to die in war while leaving the entire continent in tatters.

Considering the disastrous chain of events that occurred from two bullets fired by Gavrilo Princip on June 28, 1914, it could be said that this was the single deadliest moment in history.

The man who arguably single-handedly reshaped the course of the 20th century was born in the tiny town of Obljaj in Bosnia in 1894. Gavrilo Princip’s parents were poor peasants who led lives dominated by physical labor. 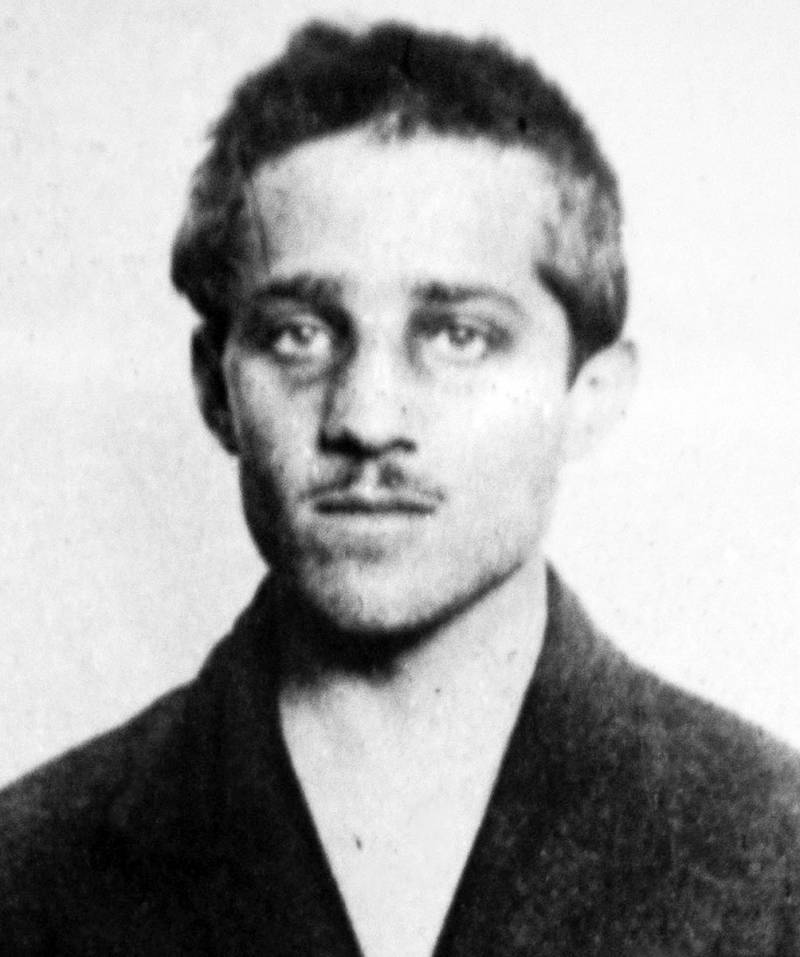 Wikimedia CommonsGavrilo Princip’s prison photo, taken after the 19-year old had killed the heir to the Austro-Hungarian throne.

Though he was the only one of his parents’ children to survive to adulthood, Princip was a small and sickly boy. His unimpressive stature is thought to have fueled his determination to prove himself through some noteworthy act. As he himself recalled, “wherever I went people took me for a weakling… and I pretended I was a weak person, even though I was not.”

Princip might have endured a similar fate as his laboring parents had he not been exposed to ideas of socialism and anarchism while at school in Sarajevo, where he mingled with like-minded young revolutionaries.

It was a tumultuous time in southeastern Europe’s history as Gavrilo Princip grew up. The southern Slavic states yearned for independence from the Ottoman and Austro-Hungarian Empires, which had long dominated the region.

Princip fervently believed that Serbia, as the free part of the south Slavs, was obligated to help unify the southern Slavic peoples as an independent nation. This nationalist sentiment garnered support throughout the Balkans.

Shortly thereafter, the young Princip came into contact with a group that would turn his ideas into actions: the Black Hand. 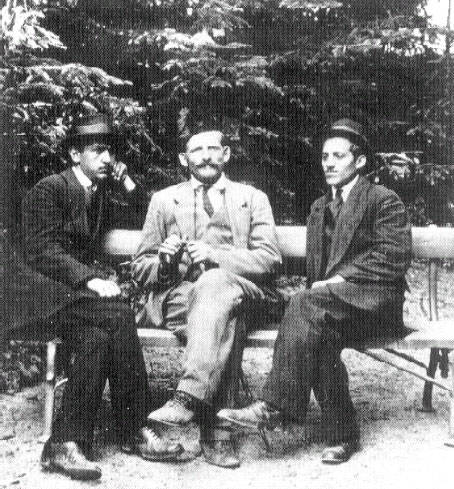 The Black Hand was a secret society founded in March of 1911. It was comprised of dissenters who deeply resented that the Serbian government had allowed Austria-Hungary to annex Bosnia-Herzegovina — and as a Bosnian Serb, Princip was incensed.

The Serbian nationalists of Black Hand were angered by what they saw as an aggressive extension of Austrian power and an attempt to limit Serbia’s own influence in the Balkans. Black Hand’s goals were to unite all ethnic Serbs and form a southern Slavic federation in Eastern Europe that would be free from Austrian rule entirely.

The members of Black Hand often held well-placed positions in the military and government. They were, therefore, able to establish underground revolutionary networks in several countries, including Serbia and Bosnia. They could also provide their members with critical information and weapons.

Gavrilo Princip was initially dismissed by the Black Hand as being too small and too weak, but was eventually trained by them in terrorist tactics. It was only a matter of time before his new skills would be put to use.

The Assassination Of Archduke Franz Ferdinand

Gavrilo Princip read in a small newspaper clipping in Belgrade in early 1914 that Archduke Franz Ferdinand, heir to the Austro-Hungarian empire, would be visiting Bosnia-Herzegonia.

For Princip, the Archduke was the symbol of everything he was fighting against. Together with five other conspirators, Princip plotted to assassinate Ferdinand during his visit. The assassins then obtained bombs, pistols, and cyanide capsules — in the event that they were captured — from the Black Hand. 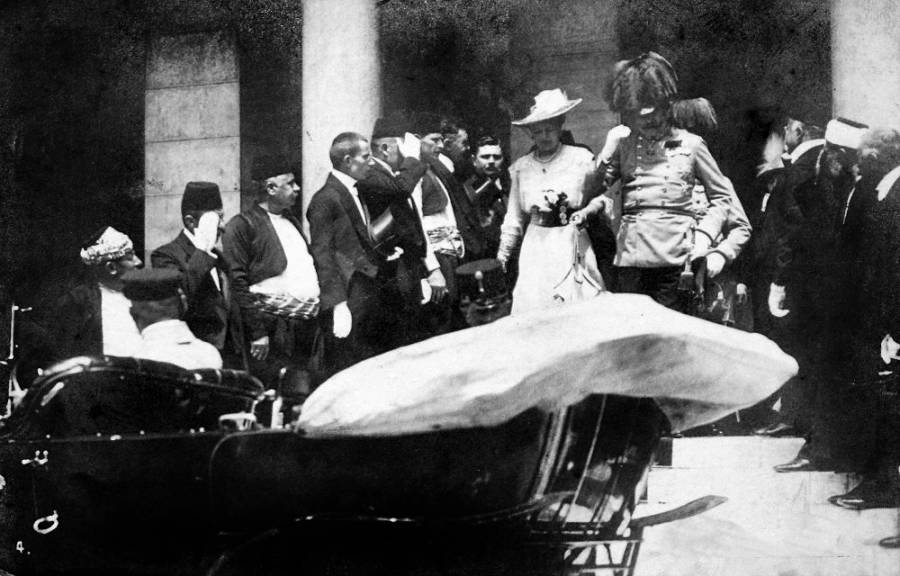 Wikimedia CommonsArchduke Franz Ferdinand and his wife Duchess Sophie get into the vehicle in which they would both be killed shortly after the taking of this photo.

The Archduke was not ignorant of the danger of visiting a country hostile to the Austro-Hungarian empire. Though he was warned multiple times to cancel his trip, on June 23, 1914, Franz Ferdinand set out anyway with his wife Sophie, the Duchess, on June 23, 1914.

The royal couple prepared to return home after a few uneventful days on the road. On June 28, Franz and Sophie got into an open-topped car to take a drive through the city of Sarajevo on a pre-planned route. The route had been published in advance to inform cheering onlookers as to where they could view the visiting royals. Unfortunately, this information also gave Princip and his co-conspirators the exact locations of their victims.

As the royal motorcade rolled down an avenue alongside the Miljacka River, one of the conspirators lobbed a grenade at the archduke’s vehicle. It bounced off of the car and consequently detonated under a different vehicle. The failed assassin was apprehended despite jumping into the river and attempting to swallow one of the cyanide capsules.

Two other conspirators reportedly also had clean shots at Ferdinand, but lost their nerve and let the archduke pass unharmed. 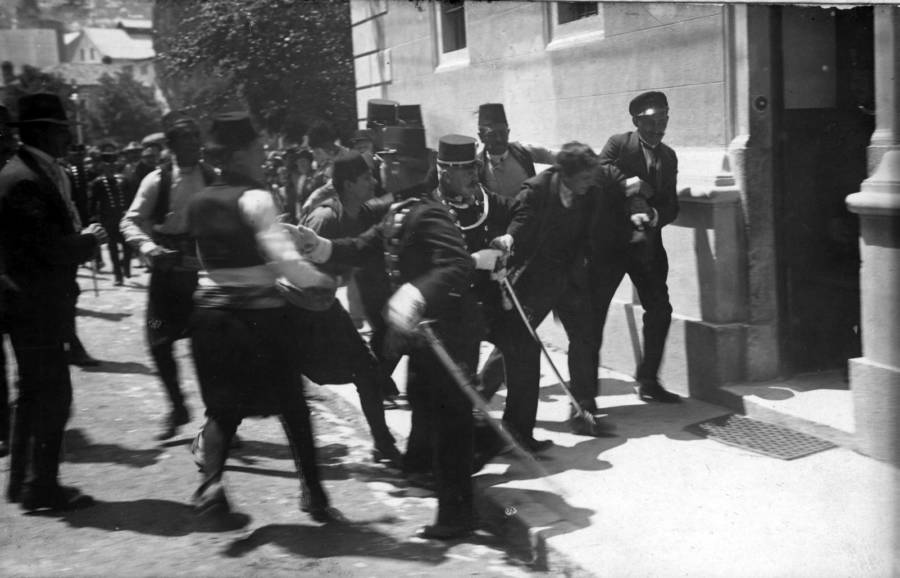 Wikimedia CommonsOne of Franz Ferdinand’s assassins is arrested on the streets of Sarajevo.

Rather than be deterred by the bungled assassination attempt, the Austrian royals decided to finish their tour. In an effort to throw off any other assassins lurking in the crowds, the motorcade sped through Sarajevo’s streets. Unfortunately, this attempt at increased security caused the motorcade to accidentally turn off of the main route onto a side street, right in front of Gavrilo Princip.

Unlike his fellow conspirators, Princip did not bungle his shot nor lose his nerve. As the car bearing the royal couple attempted to reverse and get back on its route, Princip raised his pistol and fired two shots point-blank at the duke.

One bullet went through the Duke’s jugular vein, the other through his wife Sophie.

Gavrilo Princip later stated, “whether I hit the victims or not, I cannot tell because instantly people started to hit me.” For a moment, it seemed as though he too had failed in his goal. Although Duchess Sophie instantly crumpled to the car floor, the Archduke remained “stiffly upright.” He desperately urged his fallen wife:

Minutes later, however, Ferdinand was dead and the course of World War I was set.

The Tumultuous Fallout And Onset Of World War I 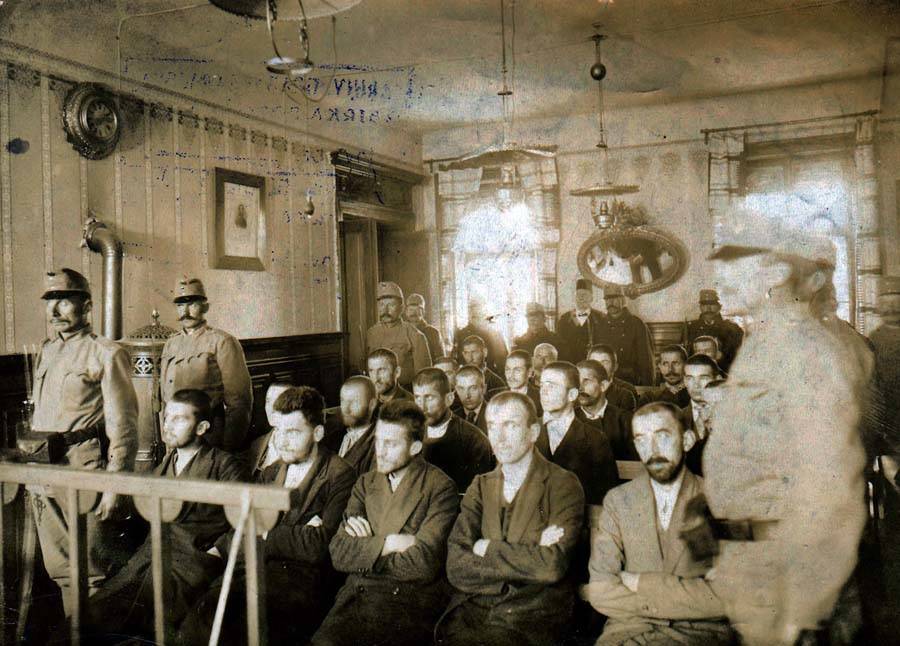 AFP PHOTO/HISTORICAL ARCHIVES OF SARAJEVOGavrilo Princip, center of the first row, and other young revolutionaries stand trial for the assassination of Archduke Franz Ferdinand.

Austria-Hungary’s reaction to the assassination was swift and furious. They sent an ultimatum that called for an investigation into the assassination but the Serbian’s refused their terms. The complicated system of alliances in Europe at the time meant that this refusal would trigger a war between not just the two states, but the entire continent.

A week after the ultimatum was issued, Russia, Germany, France, Belgium, and Great Britain had all entered into the war that would change the world forever and leave Europe in tatters. 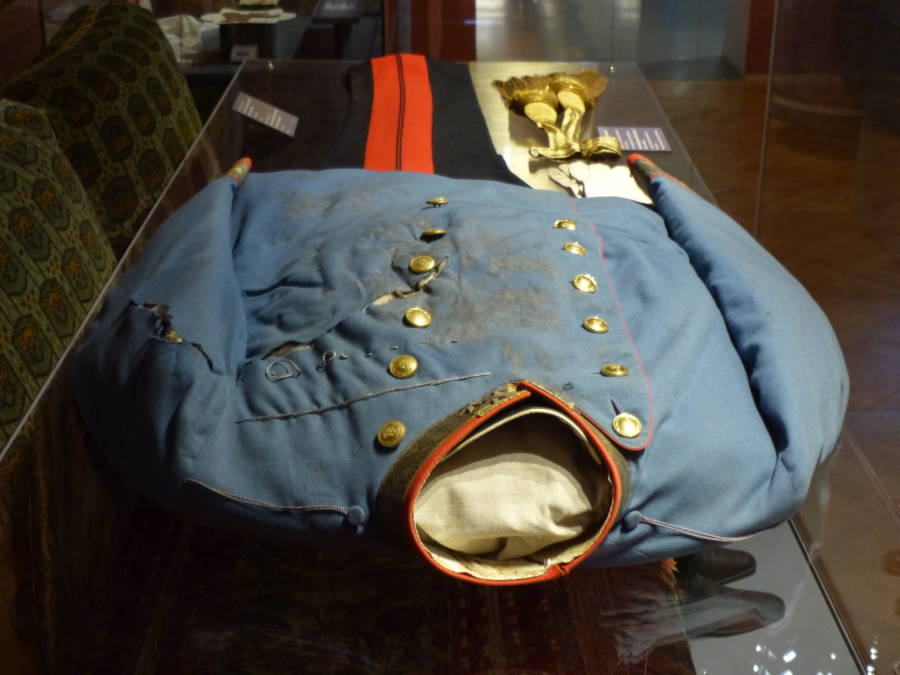 Wikimedia CommonsThe uniform the archduke was wearing the day of his assassination on display in Vienna with the bloodstains still clearly visible.

As for the man who started it all, the 19-year old Gavrilo Princip escaped the death penalty by three weeks: ironically, the Hapsburg laws he had fought to overthrow forbade anyone younger than 20 from being sentenced to die.

Princip was instead sentenced to 20 years imprisonment, of which he served barely four before passing away from tuberculosis in 1918. He remains a controversial figure to this day who is dismissed as a terrorist in some quarters and hailed as a nationalist hero in others.

Whether hero or villain, one thing that is certain: Gavrilo Princip changed the course of history. His actions resulted in a war so devastating and horrific that it was dubbed the “Great War.”

By the end of World War I, the houses that ruled Europe for centuries, Hapsburg, Ottoman, and Romanov, had all fallen, taking 40 million souls with them.

After learning about Gavrilo Princip, the man who assassinated Archduke Franz Ferdinand, read about the Christmas Truce of World War I. Then, check out the flying ace of World War I, Manfred von Richthofen, the Red Baron.