The Story Of Bridget Deignan, The Immigrant Maid Who Was Hanged For A Murder She May Not Have Committed

In 1867, a poor Irish immigrant named Bridget Deignan was put to death for the murder of her boss, Mary Ellen Coriell — but here’s why some modern historians think she may have been unfairly blamed.

The curious case of Bridget Deignan is a shocking but true story of murder — and potentially justice denied. Deignan was only 22 years old in 1867 when a judge in Middlesex County, New Jersey, sentenced her to death for the murder of her employer, Mary Ellen Coriell. 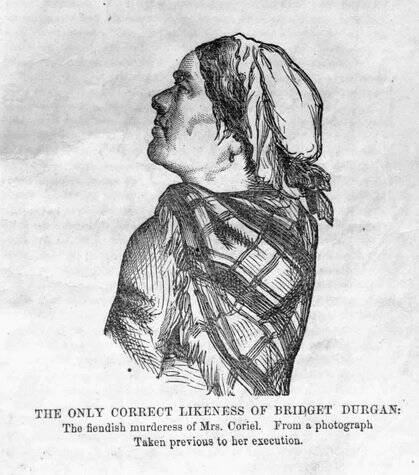 She was hanged in the public square for her crimes. But more than 150 years after the fact, questions about the true nature of her guilt continue to hang in the air.

Was this poor, illiterate Irish immigrant a fiendish brute desperate to kill her employer for money — or was she railroaded by a system rigged against her?

Born in 1844 in County Sligo, Ireland, Bridget Deignan could not have come into the world at a worse time. Ireland was in the throes of what would become known as the Great Famine, and her county was nearing devastation. A bad potato crop left most families were unable to feed themselves or provide even the most basic needs for their children.

“There are 438 men, who have, on an average, a family of five including a wife, children or aged and destitute parents thereby making more than 2560 souls,” read a report sent to the Relief Commission from the Town and Harbour Commissioner of Sligo, per the Irish Independent.

“The awful visitation of the failure of the potato crop, the increase of which you have taken such lively and pain-worthy exertions to prevent, has baffled all prescribed remedies and each succeeding day brings further information of failure where safety was expected.”

So, as soon as she was old enough, Bridget Deignan left Ireland on her father’s orders and set sail for the United States, hoping for a better opportunity. It wasn’t long before she was hired by New Jersey couple Dr. William Coriell and his wife, Mary Ellen, as a servant and wet nurse on Oct. 22, 1866.

The doctor, a Civil War veteran, was also treating Bridget for catalepsy, a neuro-muscular disorder that is sometimes caused by shock or extreme trauma. Despite her affliction, the Coriells initially felt that Deignan was a good servant, and was especially kind to their 2-year-old daughter Mamie.

Unfortunately, things took a turn for the worse.

The Murder Of Mary Ellen Coriell

Despite Bridget Deignan’s kindness toward the Coriell child, life with the family was a nightmare. Deignan and Mary Ellen were at loggerheads constantly, and Mary Ellen frequently and bitterly complained about what she felt were the young woman’s “filthy” habits. What’s more, Bridget began developing a crush on Dr. Coriell and mistook his kindness for romantic affections. Naturally, this caused even more tension between the two women.

Finally, after four months of employment, the Coriells fired Deignan, and claimed she became “unhinged” at the thought of unemployment. Her last official day with the family was Feb. 25, 1867. That evening, Dr. Coriell left the home to deliver a baby across town. According to The New York Times — who incorrectly identified the Irish immigrant as “Bridget Durgan” — then savagely beat her employer to death. To cover her tracks, she set the house on fire, grabbed the child, and ran to Dr. Coriell’s cousin, Israel, for shelter and guidance.

Bridget Deignan claimed that the lady of the house was a victim of a burglary gone wrong. But an initial look at the evidence told a different story. For one, there was a suspicious blood spot on her dress, which was believed to belong to Mary Ellen. Second, Bridget reeked of kerosene, which immediately made her a suspect in the fire. Finally, her story changed several times, which immediately aroused suspicion.

On May 31, 1867, Bridget was found guilty of murder and sentenced to hang. Just two months later, authorities carried out her execution and left her dead body to hang from the gallows in the public square. She was ultimately buried in the St. Peter’s Roman Catholic cemetery in Jersey City, having been transferred there from the Old Catholic Cemetery in New Brunswick.

In her book, Bridget’s Hanging, Sheila Duane raised questions about Bridget Deignan’s guilt, conviction, and sentence. According to Duane, everything about the case reeked of the anti-Irish (and, more specifically, anti-Roman Catholic) sentiments that were prevalent at the time.

She pointed to Deignan’s last name initially being misspelled in the papers and the mischaracterization of the poor Irish immigrant escaping a nationwide famine as a conniving social climber and prostitute from a well-to-do family. Then, there was the matter of multiple versions of Deignan’s alleged confession and inconsistencies in the official story.

“As I researched her story, I had to ask myself, what could she possibly have done to save herself?” she asked Irish Central. “Bridget was guilty of being a poor, illiterate, Catholic, and an Irish immigrant. She was, however, not guilty of murder. Her death on the gallows in New Jersey in 1867 was a gruesome miscarriage of justice.”

Duane claimed that Bridget Deignan was a victim of a “mob mentality” type of justice — and was ultimately railroaded because she practiced a foreign religion (as most Americans were Protestant), had a thick brogue that made her difficult to understand, and was young and incapable of navigating a foreign land like the United States.

While, certainly, there are plenty of questions surrounding her conviction, it’s ultimately unclear who killed Mary Ellen Coriell on that fateful night.

What is clear, however, is that Bridget Deignan paid the ultimate price for the murder. And if there was even a shred of doubt of her guilt, her death was indeed a brutal miscarriage of justice.

Now that you’ve read all about the case of Bridget Deignan, learn about the notorious Hello Killy murder of Hong Kong, considered one of the most depraved crimes in the country’s history. Then, read all about Junko Furuta, who was tortured to death after winning a game of mahjong against her captors.