On February 21, 1910, in an East Harlem tenement, one of the most notorious gangsters of the 20th century was born. Camillo Carmine Galante was the son of Sicilian immigrants from the seaside village of Castellammare del Golfo. He was destined to become a Mafia legend.

Born Camillo Carmine Galante in East Harlem on February 21, 1910, he exhibited criminal tendencies that at age 10 landed him in reform school. As a teenager, he worked at multiple places including a floral shop, a trucking company, and on the waterfront as a stevedore and fish sorter. 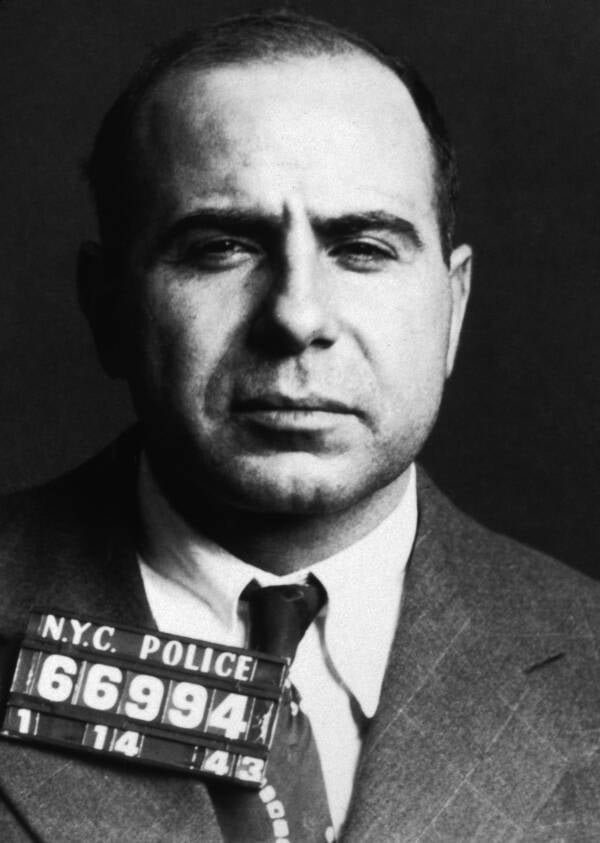 These were just covers for his true calling as a Mafioso. Among the various charges ascribed to him were bootlegging, assault, robbery, extortion, gambling, and murder.

Galante’s first notable alleged murder occurred on March 15, 1930, for slaying a police officer during a payroll robbery. Galante was not prosecuted for lack of evidence. Then, that Christmas Eve, he and other gang members attempted to hijack a truck and found themselves in a shootout with police. Galante accidentally wounded a six-year-old girl.

Carmine Galante did time at Sing Sing Prison where a psychiatrist evaluated him in 1931. According to his FBI dossier:

“He had a mental age of 14 ½ and an IQ of 90. He…had no knowledge of current events, routine holidays, or other items of common knowledge. He was diagnosed as a neuropathic, psychopathic personality, emotionally dull and indifferent with prognosis as being poor.” 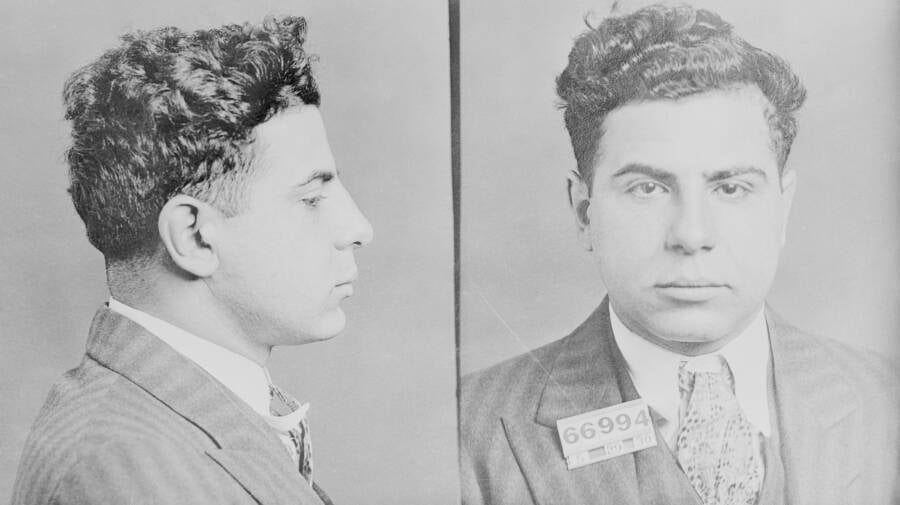 A rare 1930 mugshot of Carmine Galante. He was arrested more than once that year.

A Contract Killer For Mussolini

Carmine Galante was released on parole in 1939. Around this time, he started working for the Bonanno crime family whose head, Joseph “Bananas” Bonanno, also hailed from Castellammare del Golfo. Galante remained loyal to Bonanno throughout his career. 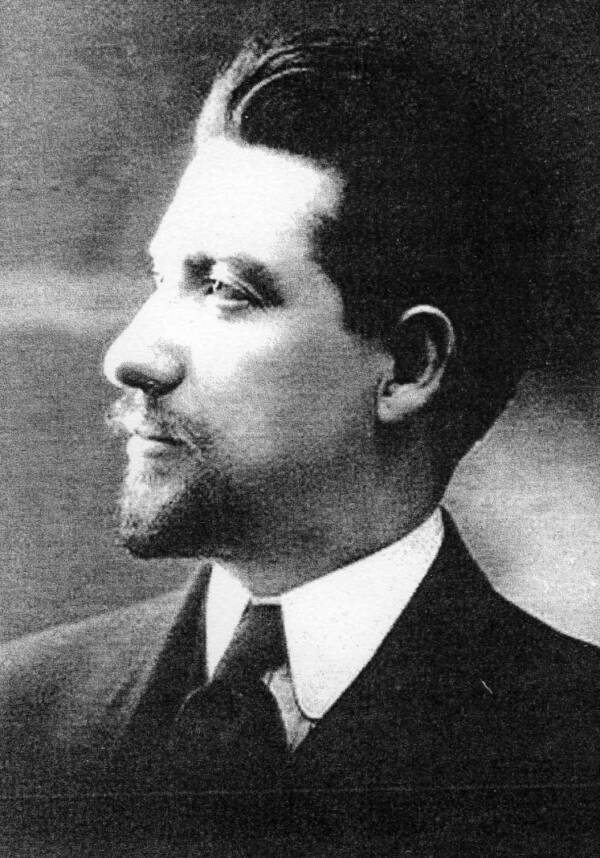 In 1943, Galante made the mark that elevated him from ordinary gangster to mafia star.

Around this time, crime boss Vito Genovese had fled to Italy to escape murder charges. While there, Genovese tried to ingratiate himself with Italy’s fascist Prime Minister Benito Mussolini by ordering the execution of Carlo Tresca, who published an anarchist newspaper in New York that was critical of the dictator.

On January 11, 1943, Galante allegedly carried out the execution — possibly on the orders of the Bonanno underboss, Frank Garafolo, who also had been insulted by Tresca. Galante was never charged due to lack of evidence — all the police could do was link him to an abandoned car found near the murder scene — but the Tresca hit cemented Galante’s reputation of violence.

In 1945, Galante married Helen Marulli. They later separated but never divorced. Galante would later state that he never divorced her since he was a “good Catholic.” He lived for 20 years with a mistress, Ann Acquavella, who bore two of his five children.

By 1953, Carmine Galante rose to become the Bonanno Family’s underboss. It was during this time that he was dubbed “the Cigar” or “Lilo,” which is Sicilian slang for cigar. He was rarely seen without one. 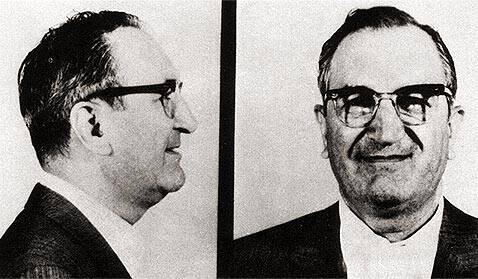 Wikimedia CommonsGalante served as Joseph Bonanno’s chauffeur, capo, and finally as his underboss.

Galante’s value to the Bonanno operation was in drug trafficking, particularly heroin. Galante spoke various Italian dialects and was fluent in Spanish and French. He oversaw the family’s drug business in Montreal as it smuggled so-called “French Connection” heroin from France into the United States.

Galante spent the years 1953 to 1956 in Canada organizing the narcotics operation. He was suspected of being behind several murders, including those of drug carriers who were too slow. Canada eventually deported Galante back to the United States.

Heroin And The Zips

In 1957, Joseph Bonanno and Carmine Galante held a meeting of various mafia and gangster chieftains — including the real-life Mafia godfather Lucky Luciano — at the Grand Hotel des Palmes in Palermo, Sicily. An agreement was reached where the Sicilian mob would smuggle heroin into the U.S., and the Bonannos would distribute it. 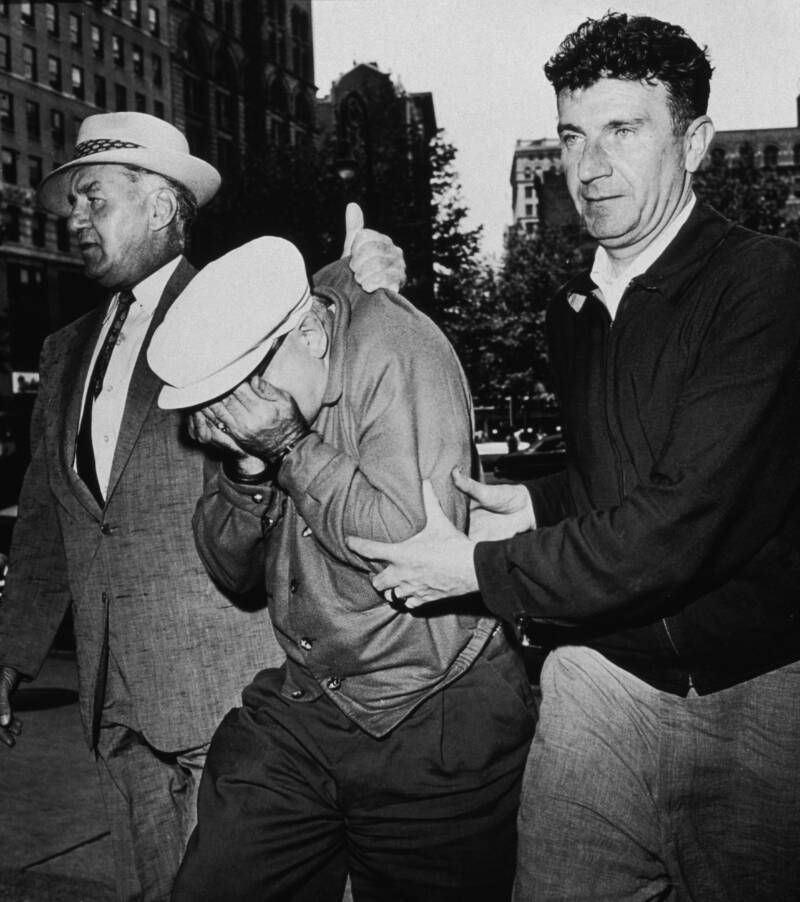 Galante recruited Sicilians from his hometown, so-called “Zips,” a slang term of indeterminate origin, to act as his bodyguards, contract killers, and enforcers. Galante trusted the “Zips” more than American-born gangsters, which would ultimately doom him.

In 1958 and again in 1960, Galante was indicted for narcotics trafficking. His first court proceedings in 1960 ended in a mistrial when the foreman of the jury broke his back in a mysterious fall inside an abandoned building. “There was no question but that he was pushed,” said William Tendy, a former assistant U.S. attorney.

After a second trial in 1962, Galante was convicted and sentenced to 20 years in federal prison. Galante, who was 52 at the time of his sentencing, seemed washed up, but he plotted to come back in a big way.

While Galante was in prison, Joe Bonanno was forced to retire by the Commission, the shadowy body governing the rules of the American Mafia, for conspiring against the other crime families.

When Galante was paroled in 1974, he found only an interim chief of the Bonanno organization in place. Galante took control of the Bonannos in a swift coup d’état.

Carmine Galante ratcheted up the narcotics trade while plotting war on his rivals. He held the Gambinos in particular contempt because of their longstanding rivalry with the Bonannos, and because they had been muscling into the Bonanno drug empire.

Galante reputedly raked in millions of dollars per day, but he was too brash and contemptuous. He roamed the streets of Little Italy like an aristocrat and allegedly had eight Gambino family members murdered to cement his power in the drug trade.

“Not since the days of Vito Genovese has there been a more ruthless and feared individual,” said Lieutenant Remo Franceschini, head of the organized crime intelligence section of the New York City Police Department. “The rest of them are copper; he is pure steel.”

The other families feared his power grab. It became clear what Galante’s ultimate goal was when he bragged to an associate he was becoming “the boss of bosses,” thereby threatening the Commission itself.

Even after a 1977 New York Times exposé detailing his rise as a Mafia don and an FBI target, Galante was so confident in his power that he did not bother to carry a gun. He remarked to a journalist, “No one will ever kill me — they wouldn’t dare. If they want to call me boss of bosses, that’s all right. Between you and me, all I do is grow tomatoes.”

The Commission decided that Galante had to go and ordered his execution. It is even reported that Joe Bonanno consented.

Lunch At Joe And Mary’s

On Thursday, July 12, 1979, Carmine Galante visited Joe & Mary’s, an Italian restaurant on Knickerbocker Avenue in Brooklyn’s Bushwick neighborhood that was owned by his friend Giuseppe Turano. He dined with Turano in the sunlit garden patio with no guns in sight.

They were soon joined by a friend, 40-year-old Leonard Coppola, and two Zips named Baldassare Amato and Cesare Bonventre. At 2:45 p.m., three men in ski masks entered the premises. 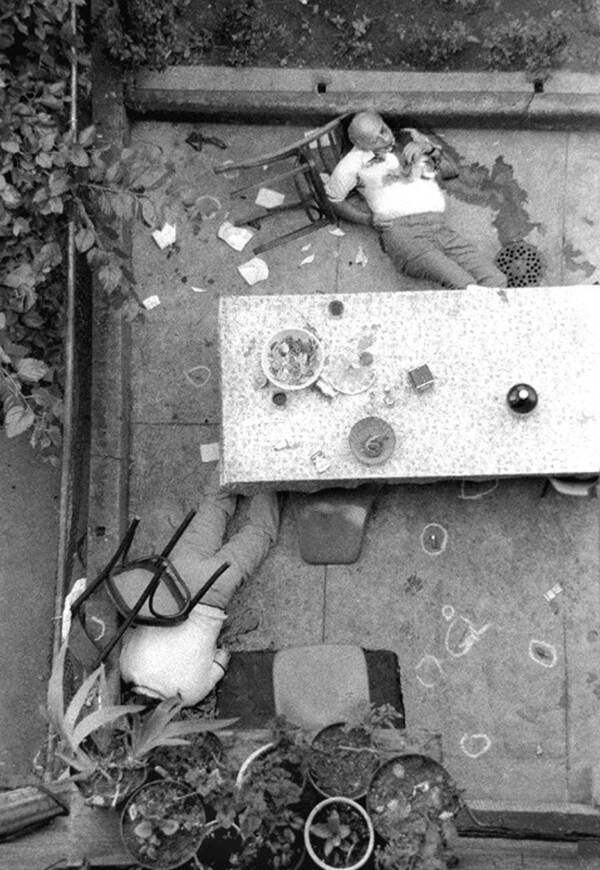 The bodies of Carmine Galante (right) and associate Leonardo Coppolla lie in the backyard of a restaurant at 205 Knickerbocker Avenue in Brooklyn where they were murdered. Chalk marks indicate the slugs, casings, and impact points in the assassination.

In moments, Galante was “blown backward by the force of a shotgun blast that struck him in the upper chest and by bullets that pierced his left eye and riddled his chest.” He was 69 years old.

Turano and Coppola were both shot in the head and died. Amato and Bonventre were unharmed – they were suspected to have abetted the assassination. 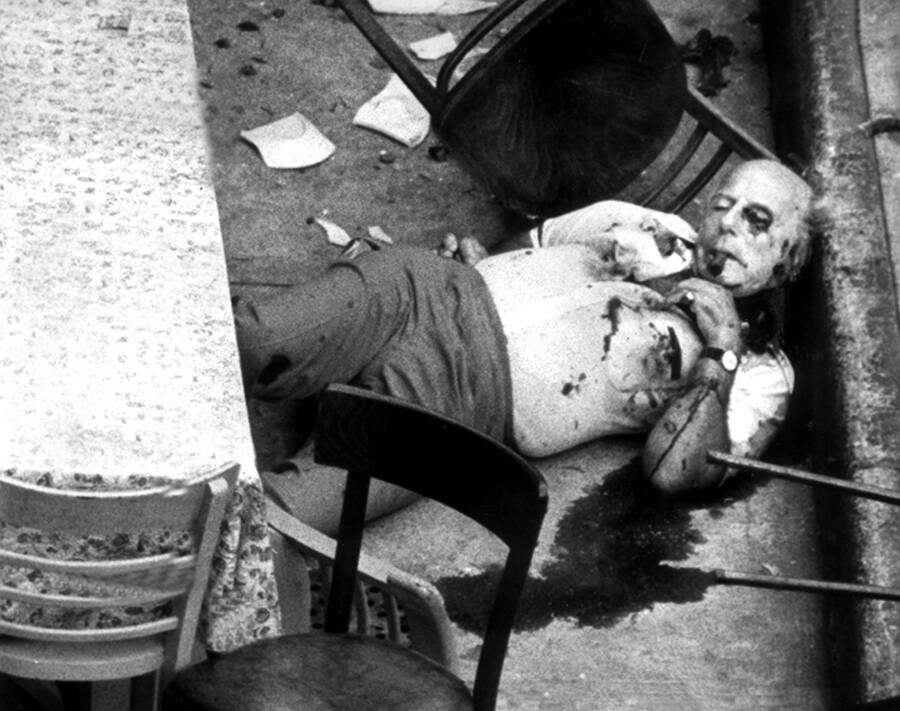 The New York Post ran a front-page photo of the grisly scene: Carmine Galante splayed dead with his last cigar hanging from his mouth.

Above the photo was a single word: “GREED!”