Genyornis, or 'thunder birds,' went extinct some 47,000 years ago, shortly after humans arrived in present-day Australia. 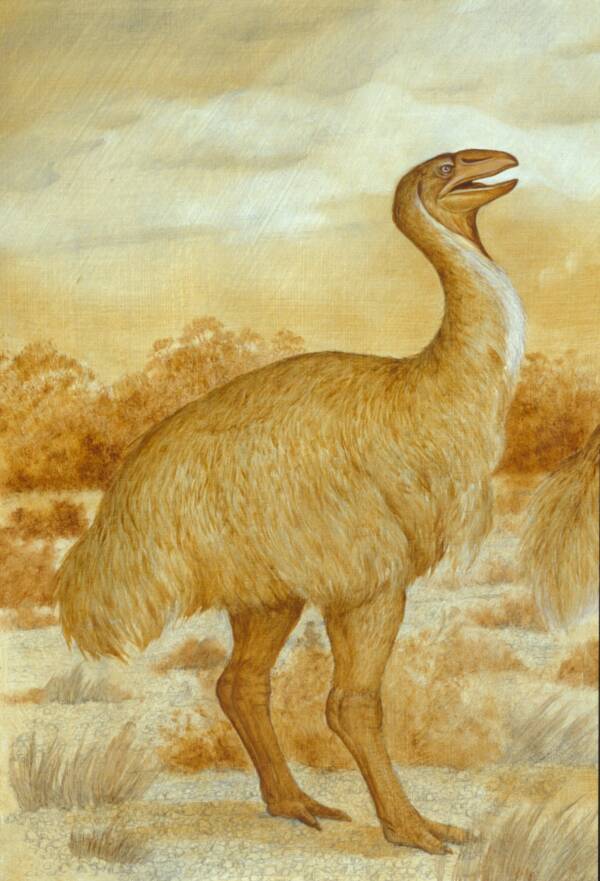 Many modern-day humans like eating eggs. So did ancient people living in Australia, and a new study suggests that they stole and ate so many eggs from huge flightless birds called Genyornis that they drove the small-winged wonders into extinction.

“Eggshell fragments with unique burn patterns consistent with human activity have been found at different places across the continent,” Gifford Miller, a geoscientist at the University of Colorado and the co-author of a paper about the birds published in Proceedings of the National Academy of Sciences, told the University of Cambridge.

He added: “This implies that the first humans did not necessarily hunt these enormous birds, but did routinely raid nests and steal their giant eggs for food. Overexploitation of the eggs by humans may well have contributed to Genyornis extinction.”

Also known as mihirunga, the birds were about six times the size of an emu, according to Science. Over six feet tall, and over 500 pounds, they once roamed the ancient Australian continent alongside marsupial lions and giant kangaroos. Then, some 47,000 years ago, they vanished.

Scientists have long suspected that humans had something to do with their extinction. After all, the first humans began to arrive in Australia some 65,000 years ago, not long before Genyornis died out. But it took studying ancient eggs to realize what role people played in the birds’ slow demise.

According to Science, researchers began to draw a connection between ancient burnt eggshells, human consumption, and thunder birds in 2016. They speculated that humans had robbed the birds’ nests, driving the giant Genyornis to an early death.

“A lot [of shells] had been burned, which implies human consumption,” Miller told Science. “That would have been the first secure evidence of direct predation.”

But there was just one problem. Though some scientists believed that the burnt eggs definitely belonged to thunder birds, and thus offered proof of humans’ role in their extinction, others argued that the eggs might have belonged to a different species altogether. 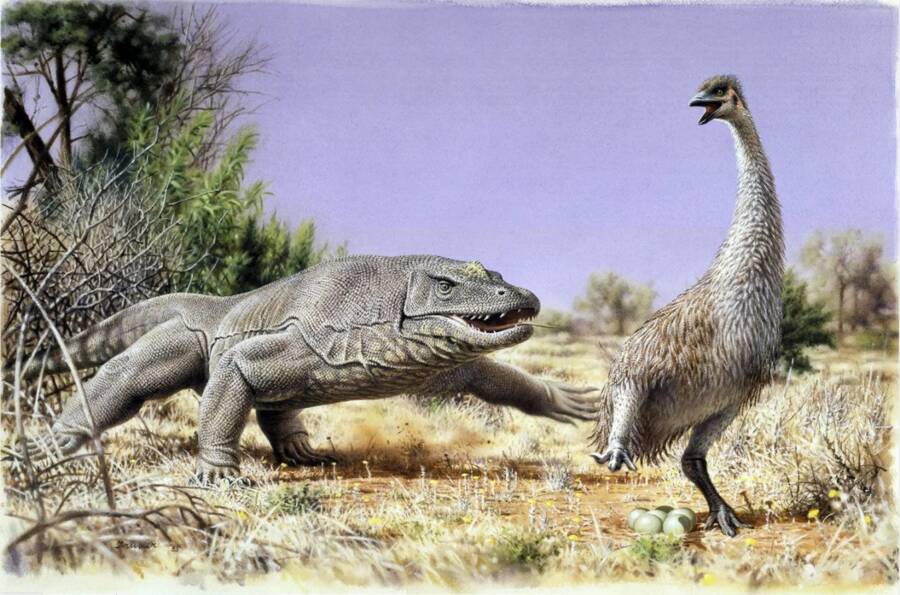 Peter TruslerA depiction of a thunder bird being chased from its nest by a Megalania lizard.

Specifically, some believed that the ancient egg fragments might belong to an extinct bird called Progura, or “giant malleefowl.” These birds were much smaller, about 11 to 15 pounds, and were comparable to large turkeys. The eggs in question, argued those who believed that they had been laid by Progura, were too fragile to be Genyornis eggs.

“We needed some independent way to demonstrate the shells belonged to a giant bird,” Miller told Science.

It was easier said than done. Scientists attempted to extract DNA from the eggs, which could have provided a quick answer to their provenance. But thousands of years in the hot Australian sun made this plan unfeasible.

“The shells were too old, and the climate is too hot,” Beatrice Demarchi, a University of Turin proteomics expert who helped identify the eggs, told Science.

Instead, the researchers decided to try a different technique. According to the University of Cambridge, they extracted a different type of “biomolecule” protein, which allowed them to compare the DNA sequence to living birds.

“This supports the implication that the eggs eaten by early Australians were laid by Genyornis.”

Miller explained that early people probably didn’t pick a fight with the birds — they just robbed their nests. Eventually, humans ate more eggs than the birds could lay.

“It’s quite possible humans were successful at chasing birds off the nest,” Miller told Science. “The most efficient way to cause an extinction is to capture the young.”

That said, questions about the thunder birds remain. Why did such huge fowl lay such small, fragile eggs? More study on that question is necessary.

After reading about the extinction of Australia’s thunder birds, see how ancient people domesticated dangerous cassowary birds. Or, learn how ancient Egyptians hunted crocodiles so that they could mummify them.