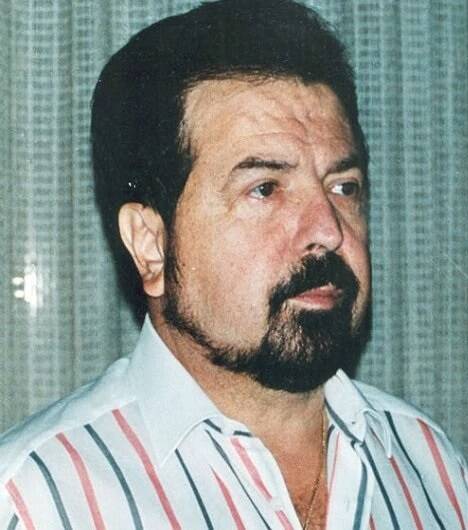 When it comes to Colombian drug lords, Pablo Escobar is undoubtedly the most well-known, notorious for his violence and intimidation. But Gilberto Rodríguez Orejuela used a different strategy — based on discretion and strategic alliances — to build his Cali Cartel into an international powerhouse that outlived even Escobar’s.

Orejuela, called “The Chess Player” for his cold logic, worked with his brother Miguel and with fellow drug lord José Santacruz Londoño to build the Cali Cartel into the most powerful in the world. Avoiding the ostentatious violence of the Medellín Cartel, they focused on backroom deals, bribes and innovative smuggling techniques to get ahead.

Gilberto Rodríguez Orejuela And The Rise Of The Cali Cartel

Born on January 30, 1939, Gilberto Rodríguez Orejuela grew up in relative obscurity. According to History Biography, he came of age in a middle-class family in Cali, Colombia, and took a job as a drugstore delivery boy to help make ends meet when his father left the family.

But Orejuela and his younger brother Miguel dreamt of more. In pursuit of easy riches, they formed the Los Chemas gang with José Santacruz Londono, flexing their criminal muscles through kidnapping and extortion. By the 1980s, their gang grew into the Cali Cartel.

The Cali Cartel was about more than drugs, however. According to TIME, Orejuela was the puppet master behind its finances, controlling a sprawling organization that included real estate, a pharmacy chain, a network of radio stations, and a soccer team. He even referred to himself as a “captain of industry and banker.”

Indeed, Gilberto and the Cali Cartel operated differently than other drug organizations. Whereas their rival Medellín Cartel, run by Pablo Escobar, shipped drugs in fast boats or planes and resorted to public violence to get their way, the Cali Cartel used a lighter touch.

They relied on slower — and less flashy — merchant marine vessels to transport their drugs, and preferred making deals with police and politicians instead of engaging them in violence. According to TIME, police called Cali drug lords “gentlemen” and Medellín drug lords “hoodlums.”

“Cali gangs will kill you if they have to,” Robert Bryden, the head of the Drug Enforcement Administration (DEA) in New York, told TIME in 2001. “But they prefer to use a lawyer.”

Plus, as the Medellín Cartel turned its attention on the Miami drug trade, Gilberto Rodríguez Orejuela and his brother focused their eyes on Europe. In the 1980s, Gilberto took their operation international.

How The Cali Cartel Expanded Into Europe 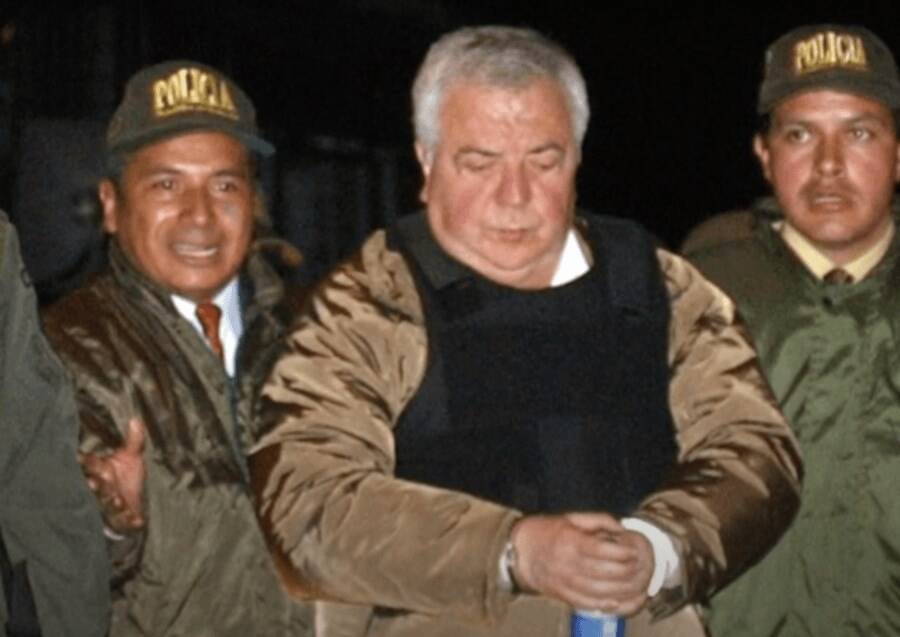 YouTube/CBS MiamiGilberto Rodríguez Orejuela was sentenced to 30 years in US prison.

By the 1980s, drug cartels had succeeded in pouring cocaine into the United States. As a result, the market was saturated and the price was dropping. That’s when Gilberto Rodríguez Orejuela made a trip to Spain in 1984 to see if he could expand the Cali Cartel into the European market.

According to Ron Chepesiuk, who wrote Narcos Inc: The Rise and Fall of the Cali Cartel, Orejuela succeeded. Writing for The Irish News, Chepesiuk explained how the Cali leader’s visit opened up European markets.

His cartel forged relationships with tobacco smugglers in Spain — who had good knowledge of smuggling routes — laundered money through Spanish and Panamanian banks, established ties with the Italian mafia, and, significantly, took advantage of the fall of the Berlin Wall and the free trade of the European Union to move drugs across the continent.

Though Orejuela was arrested in Spain in 1984, the connections he’d built back home seemed to pay off. According to TIME, the Colombian government and President Belisario Betancur fought his extradition to the United States, and Spanish Prime Minister Felipe González agreed to send Orejuela home to face charges.

“If Betancur helped in seeing I was extradited to Colombia and not the U.S., he was simply doing his duty as president, supporting an extradition order issued by a Colombian judge,” Gilberto Rodríguez Orejuela later said.

At home, he was acquitted of all charges and his cartel continued to smuggle cocaine, hiding the drug in concrete posts, frozen vegetables, coffee and ceramic tiles.

By the 1990s, Gilberto Rodríguez Orejuela and the Cali Cartel seemed unstoppable. Not only had they expanded internationally, but many of their rivals had faltered — Escobar was even killed in a shootout in 1993.

But as the Cali Cartel rose in power, its prominence became a liability. The DEA focused increasingly on the cartel, and on Gilberto Rodríguez Orejuela.

The Fall Of Gilberto Rodríguez Orejuela 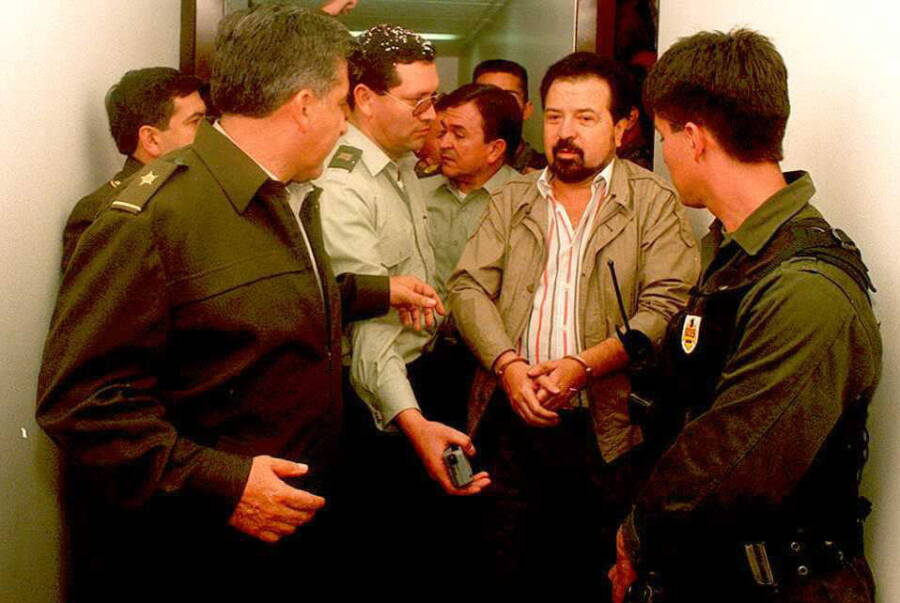 After the longest investigation in DEA history, Gilberto Rodríguez Orejuela, his brother Miguel, and their associate José Santacruz Londono, were arrested in 1995. According to CNN, female agents disguised as joggers found Orejuela after they followed “the scent of his aide’s cheap cologne to an apartment.”

Though the Orejuelas were sentenced to 15 years in prison, they continued to oversee the cartel from behind bars. Their grip on power ended in the mid-2000s, however, when the two brothers were extradited to the United States.

In 2006 they both pleaded guilty to drug trafficking charges — accepting a plea to protect members of their family — and were sentenced to 30 years in prison.

“These two men were responsible for importing more than 200 tons of cocaine into this country over the course of many years,” Attorney General Alberto Gonzales said at the time. “While at the height of their power, the intimidation and violence of their cartel held the people of the Colombian countryside hostage to fear.”

He added: “The brothers’ guilty pleas effectively signal the final fatal blow to the powerful Cali Cartel. There are always other traffickers, and thus continuing the challenges for law enforcement. But this is a day of pride for the people of Colombia and for international law enforcement.”

Today, Gilberto Rodríguez Orejuela is in his 80s and remains behind bars at the Federal Correctional Institution in Butner, North Carolina. Though he appealed for release in 2020, citing the coronavirus and his various health problems (including colon cancer, prostate cancer, two heart attacks, high blood pressure, skin cancer, gout, chronic anxiety and depression, per the Associated Press), his appeal was denied.

“The court can only imagine the far-reaching, destructive effects of this much cocaine in the United States,” U.S. District Judge Federico Moreno wrote in his denial. “How many thousands, if not hundreds of thousands, of lives were affected?”

As such, Orejuela will likely remain behind bars until either his death or his release date of Feb. 9, 2030. But he certainly left a mark on the world, operating a cartel that smuggled an estimated 200,000 kilograms (more than 440,000 pounds) of cocaine into the United States between 1990 and 2002.

He may not have been as flashy as Pablo Escobar, but Gilberto Rodríguez Orejuela was certainly as effective. The “Chess Player” of the Cali Cartel, he and his brother succeeded in building a veritable drug empire.

After reading about Gilberto Rodríguez Orejuela, discover the story of Colombian drug lord Griselda Blanco or Amado Carillo Fuentes, the Mexican drug lord called “The Lord of the Sky.”