Though he narrowly escaped, almost all of Bush's fellow pilots were tortured, killed, and eaten on that fateful day in September 1944 that became known as the Chichijima Incident. 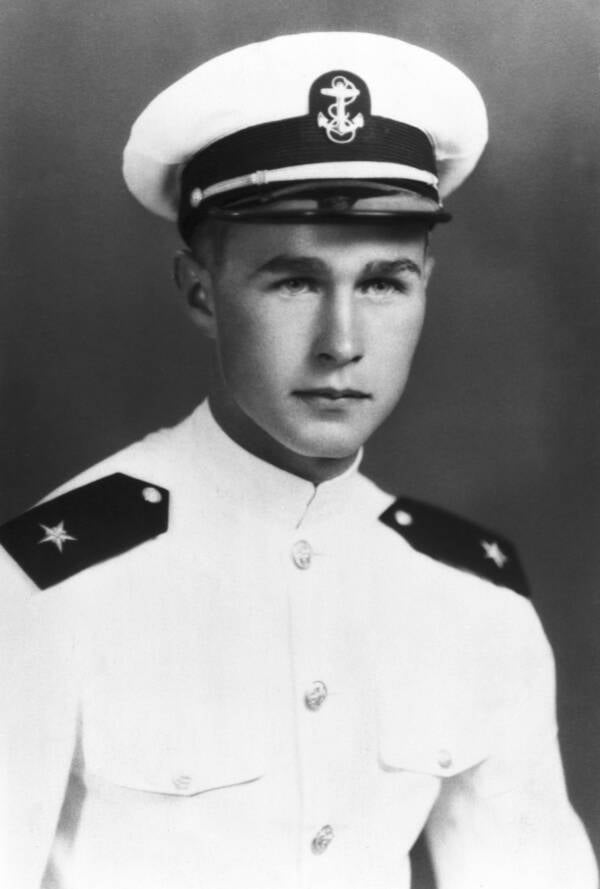 At dawn on Sept. 2, 1944, a group of American pilots fighting in the Pacific theater of World War II took to the skies. Only one would survive their bombing mission to the Bonin Islands — the rest would be tortured, killed, and cannibalized in what became known as the Chichijima Incident.

For years, the U.S. Navy obscured the horrifying truth of what happened at Chichijima. One lawyer involved in the episode remarked, “The Navy didn’t want people back home to know that their sons were eaten.”

As for the survivor? The sole man to escape the awful fate of the Chichijima Incident was a 20-year-old pilot. His name was George H.W. Bush. 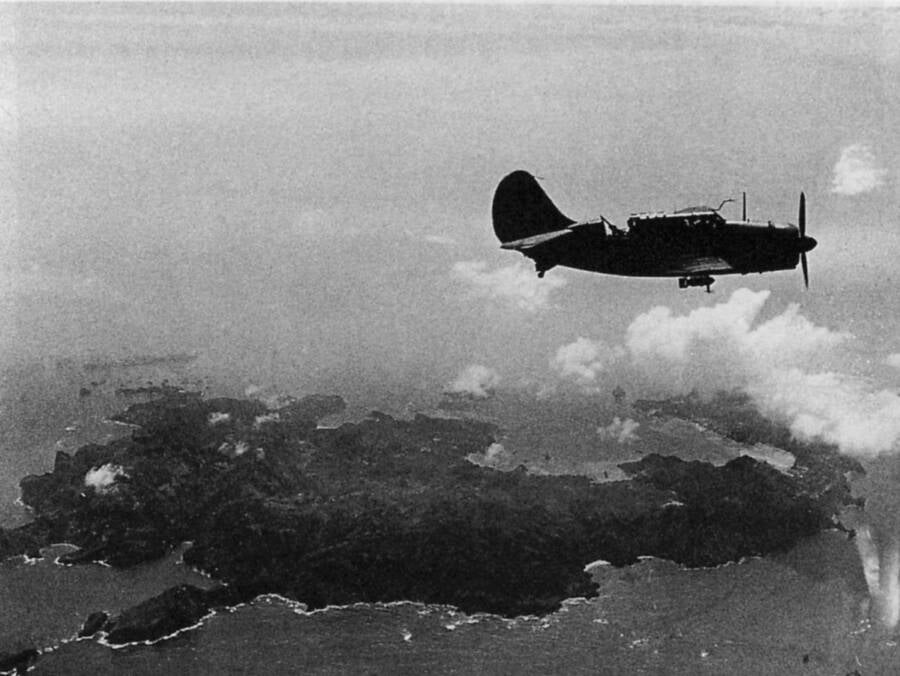 The U.S. Navy had had its eye on the island of Chichijima for quite some time. Chichijima was tiny — only about twice the size of Central Park — but strategically significant. About 500 miles from Japan, its radio tower allowed the Japanese to send long-range messages.

The Americans wanted to take it out.

In June 1944, American aircraft carriers surrounded Chichijima and started sending pilots to destroy the radio tower. But the Japanese put up a ferocious fight. Chichijima was guarded by 25,000 Japanese troops — and its anti-aircraft defense system could tear the American planes to pieces.

On Sept. 2, 1944, the Americans geared up to try again. The group of men slated to fly that morning included one of the youngest pilots in the U.S. Navy, a 20-year-old named George H.W. Bush. They took off at 7:15 a.m. — hoping, this time, to succeed in taking out Chichijima’s radio tower. 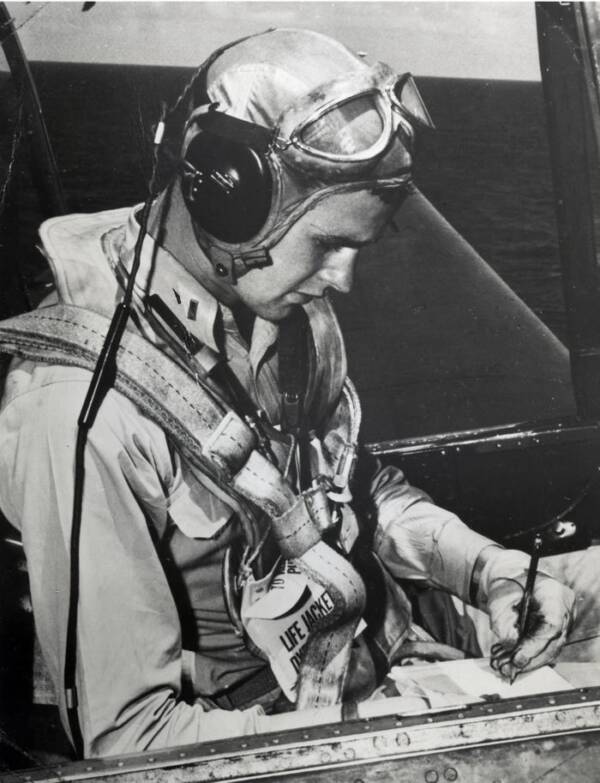 U.S. NavyGeorge H.W. Bush was one of the youngest pilots to serve in World War II.

But it didn’t take long for the Japanese to fight back. The island’s anti-aircraft defense system fired into the sky. About an hour into the mission, Bush realized that his plane had been hit.

“The plane was burning,” Bush later recalled. “The cockpit was beginning to fill up with smoke. The plane was — I thought it was going to explode.”

In spite of this, Bush continued flying — he dropped two bombs on the radio tower and then pulled the plane back toward the open ocean.

Bush wanted to get as far away from Chichijima as he could before jumping. He figured — correctly — that doing so might help him evade capture. When he couldn’t wait any longer, Bush ordered his radio operator and gunner to jump.

“Hit the silk,” he commanded.

But only he escaped. One of the other men couldn’t get his parachute to inflate; the other wasn’t able to jump from the plane. Bush watched in horror as their plane crashed into the ocean. He floated down onto the waves, alone.

“For a while there I thought I was done,” Bush later said.

Instead, he escaped the fate of eight other pilots that day — the horrific Chichijima incident.

Inside The Horrors Of The Chichijima Incident 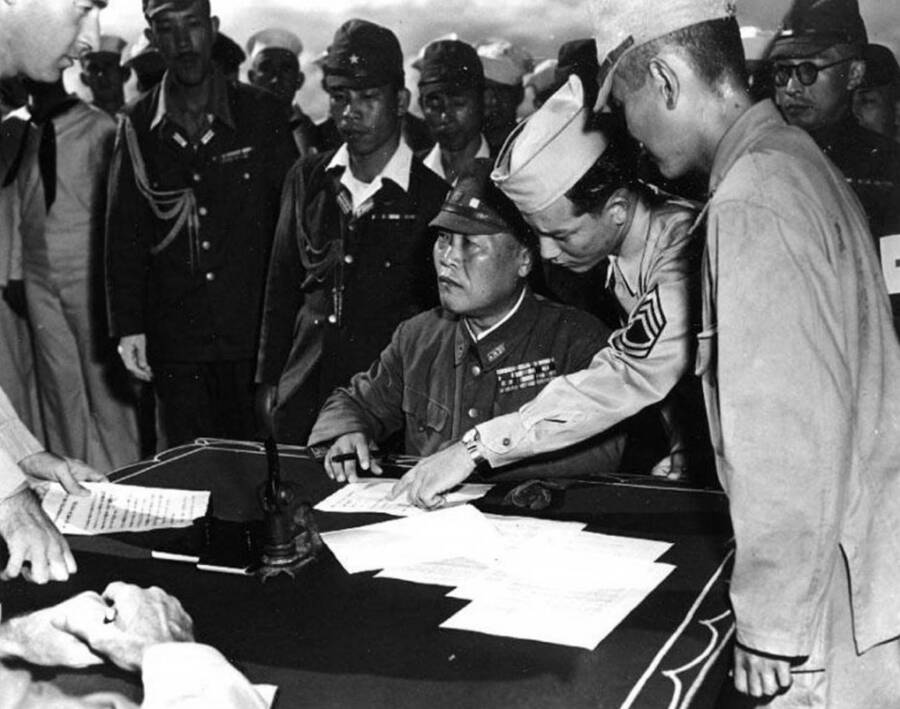 Like George H.W. Bush, a number of the other American pilots were forced to abandon their planes and land on the water. Unlike Bush, they were immediately captured by the Japanese.

Brought to the island of Chichijima, the airmen were tortured, beaten, and executed. In one particularly gruesome moment, a radio operator was marched to a freshly dug grave, blindfolded, and beheaded with a sword. Others were killed with sharpened bamboo spears. One was even clubbed to death.

But the real horror of the Chichijima Incident didn’t start until the men were dead. Shortly after one of the prisoners had been executed, Japanese General Yoshio Tachibana made a drunken suggestion to dig up his body and use it as meat.

Tachibana insisted that everyone show they had “enough fighting spirit to eat human flesh.”

As a result, surgeons removed the liver and thigh muscles of the soldiers — which cooks then presented to the Japanese officers with soy sauce and vegetables, alongside hot sake.

Admiral Kinizo Mori later testified that a chef “had [the liver] pierced with bamboo sticks and cooked with soy sauce and vegetables.”

The dish was apparently a delicacy, and according to Mori was believed to be “good for the stomach.”

Major Sueo Matoba, who was among the senior officers who cannibalized the American soldiers, later defended his actions.

“These incidents occurred when Japan was meeting defeat after defeat,” he insisted. “The personnel became excited, agitated, and seething with uncontrollable rage … We were hungry. I hardly know what happened after that. We really were not cannibals.”

The Legacy Of The Chichijima Incident 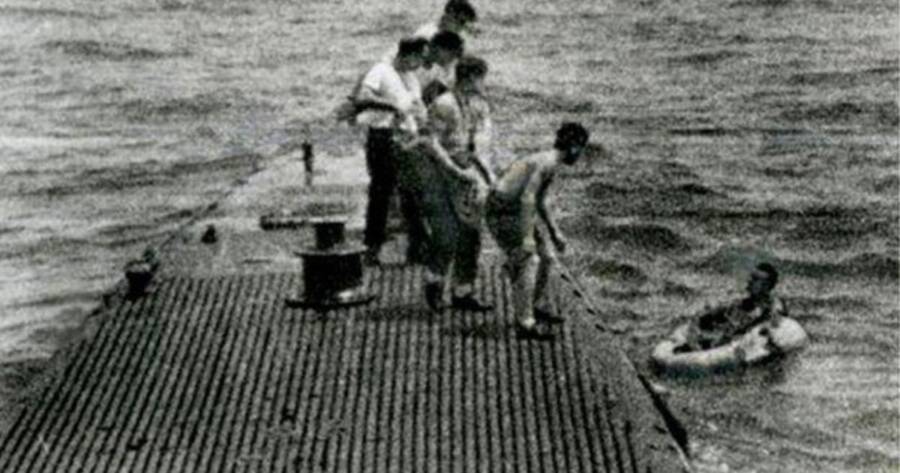 U.S. NavyGeorge H.W. Bush rescued by the USS Finback, escaping the horrors of the Chichijima Incident.

As his fellow soldiers were plucked from the ocean and brought to Chichijima, George H.W. Bush fought for his life in the middle of the sea.

Japanese boats circled nearby, hoping to capture him. But fire from the American planes above drove them back. “I was crying, throwing up, and swimming like hell,” Bush later recalled. “I could have made the Olympics that day because we had to get out of there.”

He thought he’d gone mad when a submarine suddenly breached the waves in front of him.

“I saw this thing coming out of the water and I said to myself, ‘Jeez, I hope it’s one of ours’,” Bush remembered.

Bush’s lucky streak had continued — the submarine was the USS Finback. After he was pulled from the ocean, the exhausted future president uttered just four words: “Happy to be aboard.”

Bush’s side of the story is well-known. But what happened to his fellow airmen long remained a secret.

Although the Japanese officers responsible for the Chichijima Incident later admitted their actions at war crime trials in Guam, the American soldiers’ families didn’t know what had happened to their sons. Concerned that a true account would inflict further trauma on already grieving families, the U.S. decided to label the files recounting the soldiers’ last days as “top secret.”

In fact, the heartwrenching truth of their deaths did not come out until James Bradley published his 2003 book Flyboys: A True Story of Courage.

Then, the public learned what had become of the pilots — and how narrowly an American president had avoided a similar fate.

As for George H.W Bush, the 41st president, and sole survivor? Even Bush didn’t know about the Chichijima incident. He learned about it in 2003, when Bradley was writing his book.

“There was a lot of head-shaking, a lot of silence,” Bradley said, about Bush’s reaction. “There was no disgust, shock, or horror. He’s a veteran of a different generation.”

Still, Bush’s brush with death — and perhaps worse — conjures a web of hypotheticals for the former president. Prior to his death in 2018, Bush mused about what-ifs during an interview with CNN. “I wonder if I could have done something different,” he said. “Why me? Why am I blessed? Why am I still alive?”

After learning about the Chichijima Incident, read about the most horrific war crimes ever committed — ones you didn’t learn about in history class. Then, read about American atrocities during World War II.