On June 12th, the United States experienced the deadliest mass shooting in modern history, which took the lives of 50 and injured 50-some more at a gay nightclub in Orlando. The shooter, 29-year-old Omar Mateen, specifically targeted the LGBTQ community that frequented the club in an act of what President Barack Obama has called domestic terrorism.

Local hospitals in central Florida are overwhelmed by the casualties — not just those who have died, but those who were injured and are in desperate need of blood plasma. This need comes at a time of ongoing blood scarcity in the U.S.: Blood banks throughout the country have been struggling to maintain full supplies of blood and platelets, so much so that earlier this year the Red Cross issued a state of emergency on the matter.

Hospitals and donation centers in Florida have seen an enormous volunteer turnout for blood donation following the shooting, but there are some who will be turned away due to their sexual orientation.

Historically, gay men were barred from donating blood or organs due to fears of HIV/AIDS transmission. HIV, the virus that causes AIDS, can be transmitted in multiple ways: through seminal fluid, pre-seminal fluid, breast milk, vaginal fluid, rectal fluid — and blood.

In the 1980s, when HIV was poorly understood and its mode of transmission unclear, blood donation was risky. There were very few methods for testing blood for the presence of HIV and since the origin of the virus was not yet known, pre-screening donors for risk was practically impossible. Because of this, there were instances where patients received blood transfusions and subsequently acquired HIV.

By 1985, testing for HIV became more widely available, screenings universal and blood donation became an extremely safe, well-regulated practice in the United States. Still, by 1989 the number of AIDS patients in the U.S. had topped 100,000.

Fear of HIV transmission continued and for over 30 years after the AIDS crisis, gay men were banned from donating blood. Statistically speaking, men who have sex with other men are more at-risk for HIV. However, IV drug users of all sexual orientations continue to be at-risk for exposure. Indeed, heterosexuals also can, and do, contract HIV through various modes of transmission mentioned above.

Today, blood donation is safer than ever. Aids.gov reports that all blood donors today are pre-screened for HIV risk factors. Those who donate blood are required to be tested for both the presence of antibodies to HIV and for HIV RNA. Donors who test positive for HIV are notified and their blood is safely discarded. Further, you cannot get HIV from donating blood. The sterile practices, screening measures and regulation make blood donation itself safe.

Decades later and with all these safety measures in place, the ban has not been fully lifted. The AIDS crisis led the Food and Drug Administration (FDA) to put a lifetime ban on blood and organ donation for gay men, which was partially lifted last December: still, a gay or bisexual male can only donate blood if they have been completely celibate for one year.

LGBTQ advocates have been pushing the FDA to lift the ban for years, citing its lack of scientific evidence and concerns that by singling out gay men, the FDA’s ban continues to perpetuate the stigma that AIDS is a gay man’s disease. 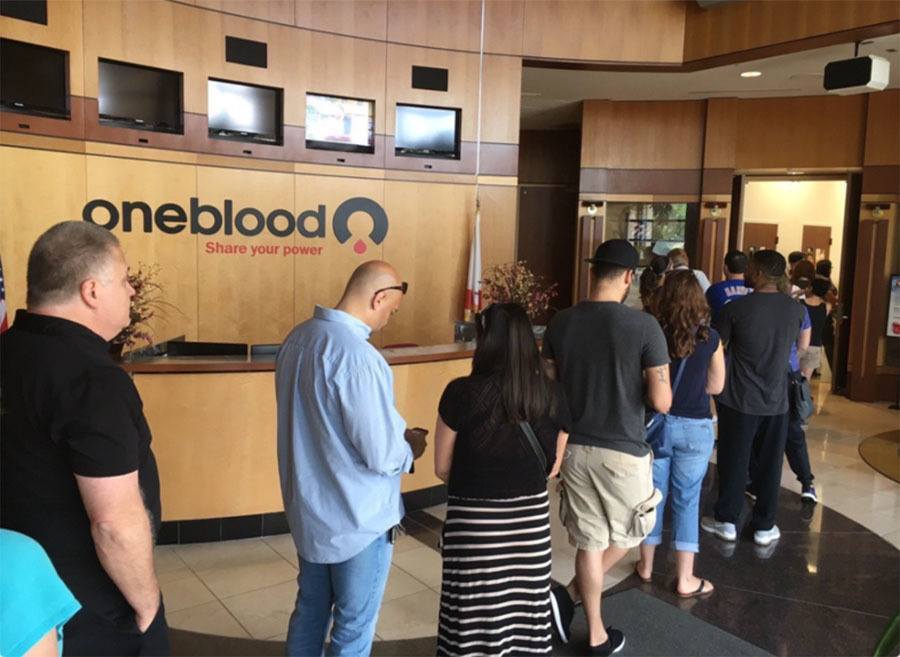 Still, the FDA remains resolute in not lifting the ban all the way. “The FDA’s responsibility is to maintain a high level of blood product safety for people whose lives depend on it,” said the FDA’s Acting Commissioner Stephen Ostroff, M.D. at the time of the statement’s issue. “We have taken great care to ensure this policy revision is backed by sound science and continues to protect our blood supply.”

Others have resisted even the partial lift of the ban, citing the blood tests’ imperfect science: blood tests remain negative for up to nine days after a person has become infected with HIV.

OneBlood, the center that has been guiding Floridians to donor centers in the aftermath of the tragedy in Orlando, issued a statement clarifying whether they would accept donations from gay men:

All FDA guidelines remain in effect for blood donation. There are false reports circulating that FDA rules were being lifted. Not true.

As of 4PM EST, 53 people have been taken to local hospitals for treatment following the shooting.