Google and the World Wildlife Fund have teamed up to use some very cool technology to thwart some very ruthless animal poachers in Africa and Asia. 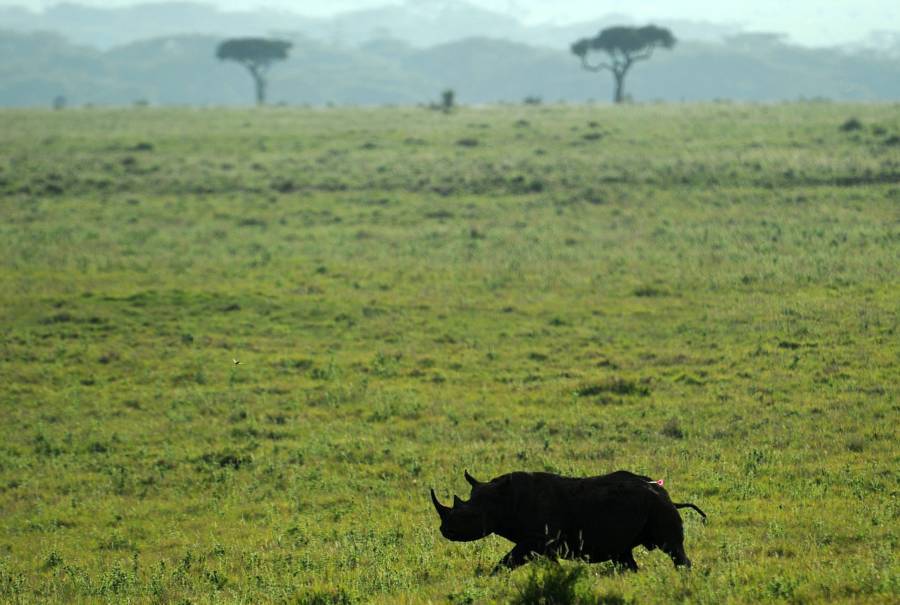 TONY KARUMBA/AFP/Getty Images A black rhinoceros at the Lewa wildlife conservancy in Laikipia County, Kenya in 2015. The adult male was tranquilized and moved to spearhead the repopulation of the Sera conservancy, farther north, one affected by heavy poaching.

Poaching and illegal wildlife trading, particularly in Africa, threaten countless species. Despite decades of conservation efforts, these criminal acts are only growing (rhinos, for example, were reported to have been poached 13 times in 2007 and 1,175 times in 2015).

But according to Colby Loucks, Senior Director of the World Wildlife Fund’s conservation efforts, new programs and technologies are now being tested and implemented in parks across Africa and Asia to combat this alarming trend — and they just might work.

“In 2012, WWF received a grant from Google.org to research, develop, and implement a suite of technologies to stop wildlife crime,” Loucks said.

With funds from the grant, this March Kenyan national parks began to utilize infrared technology with thermal imaging cameras and human detection software that can detect poachers and illegal traffickers even at nighttime. 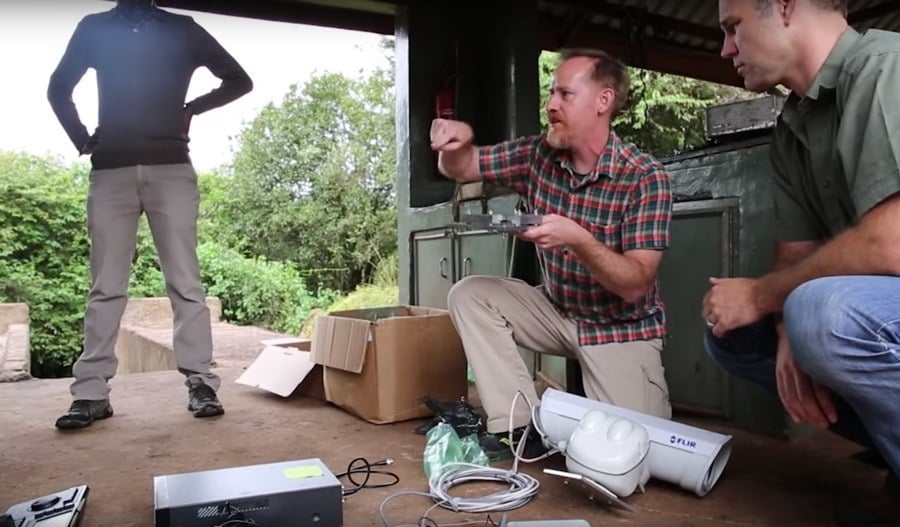 World Wildlife Fund/YouTube Colby Loucks, center, with one of the new thermal cameras.

“This is the first time that thermal cameras and human recognition software have been used to monitor a park’s boundary for conservation and anti-poaching efforts,” Loucks said. “Soon poachers will find that the element of surprise is no longer on their side—no slipping through the fence at night, no time to plan an ambush on rangers, and certainly no time to kill the magnificent animals that live in the park.”

Grey, cylindrical thermal imaging cameras positioned throughout the parks and on top of ranger vehicles can sense humans up to a mile away. Rangers, once limited simply by the darkness, are now able to “see” all large animals within the park no matter the time of day. 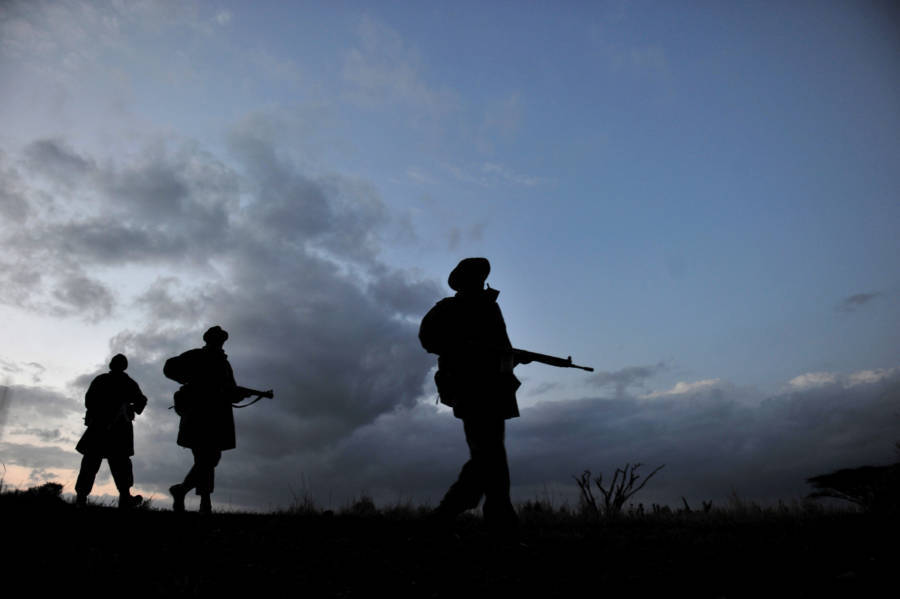 ROBERTO SCHMIDT/AFP/Getty Images Park rangers patrol at the Lewa Wildlife Conservancy in central Kenya, which has dealt with alarming levels of rhino poaching in recent years.

While seemingly simple, the cameras’ ability to detect human activity at night without the use of light is a particularly significant advancement. In the past, having only flashlights and vehicle headlights to locate poachers and wildlife criminals would actually alert offenders that they were being followed, which often rendered the searches ineffective.

Still, one might wonder that while thermal imaging might make it easy to detect activity without light, it might make it difficult for rangers to quickly distinguish between humans and wildlife. However, both the expertise of the rangers and an advanced algorithm designed by the WWF has made it possible to quickly differentiate between animals and humans on monitors which detect the subjects through these cameras.

Even without the new technology, many park rangers are experts in detecting poachers within massive landscapes, knowing from experience how and where they travel. Combining this kind of experience with the new technology may indeed change how wildlife crime is handled.

For now, though, this technology is only part of a pilot program in Kenya. And based on the failures of past tech efforts, one might rightly question if poaching is a problem that can be solved by purely technical measures.

After all, many were excited by an initiative from the Rhino Rescue Project, which changed the color of rhino horns to pink to devalue them in the eyes of poachers. When put to practical use, however, some claim that poachers were barely deterred. 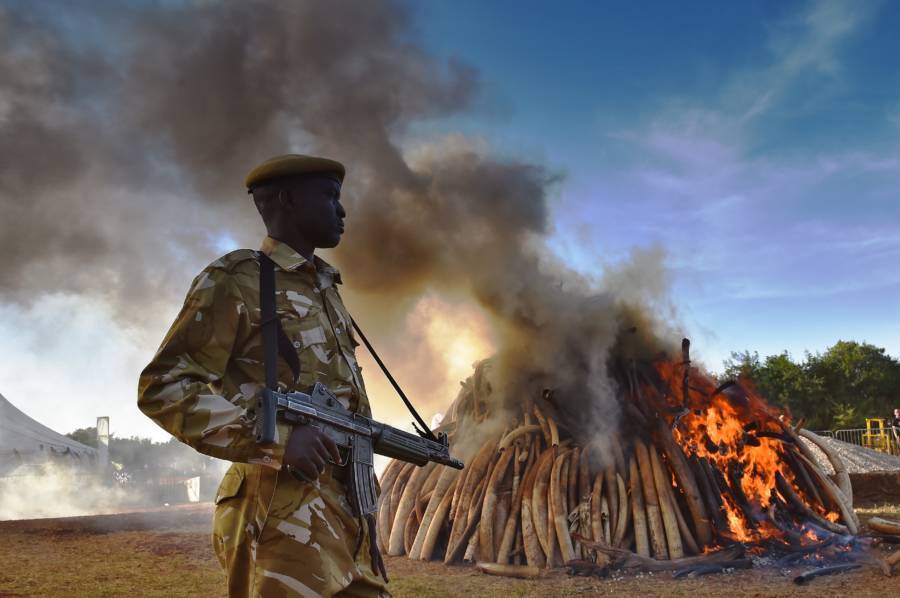 CARL DE SOUZA/AFP/Getty Images A Kenya Wildlife Service security officer stands near a burning pile of 15 tonnes of elephant ivory seized in Kenya at Nairobi National Park on March 3, 2015. Fifteen tonnes is the largest amount of contraband ivory burned in Africa to date. The fire was lit by Kenyan President Uhuru Kenyatta to mark World Wildlife Day and African Environment day. Ivory burning is one of the more dramatic methods used to combat and deter poachers.

Loucks still has hope for the thermal cameras. “If these pilot projects prove successful in Kenya – and thus far they are performing as expected – WWF plans to work with parks and private landowners across Africa to provide them access to this technology,” Loucks said.

“By developing and harnessing new and appropriate technology, we can boost the effectiveness of rangers on the front lines in the battle against wildlife crime, and help ensure porous park borders become more secure.” 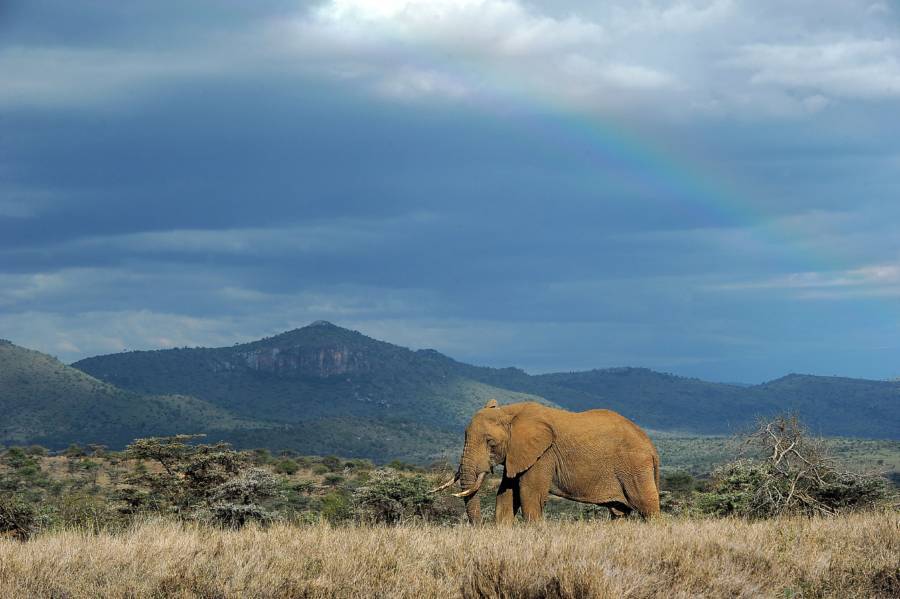 Next, check out the marines deployed to prevent turtle egg poachers in Mexico. Then, catch up with some of Africa’s wondrous animals with this stunning wildlife photography.