The Longest Walk: How British Explorer George Meegan Trekked Across The Entirety Of The Americas On Foot

Over the course of seven years starting in 1977, George Meegan secured his place in the Guinness Book of World Records for walking from the southern tip of South America to the northernmost point in Alaska. 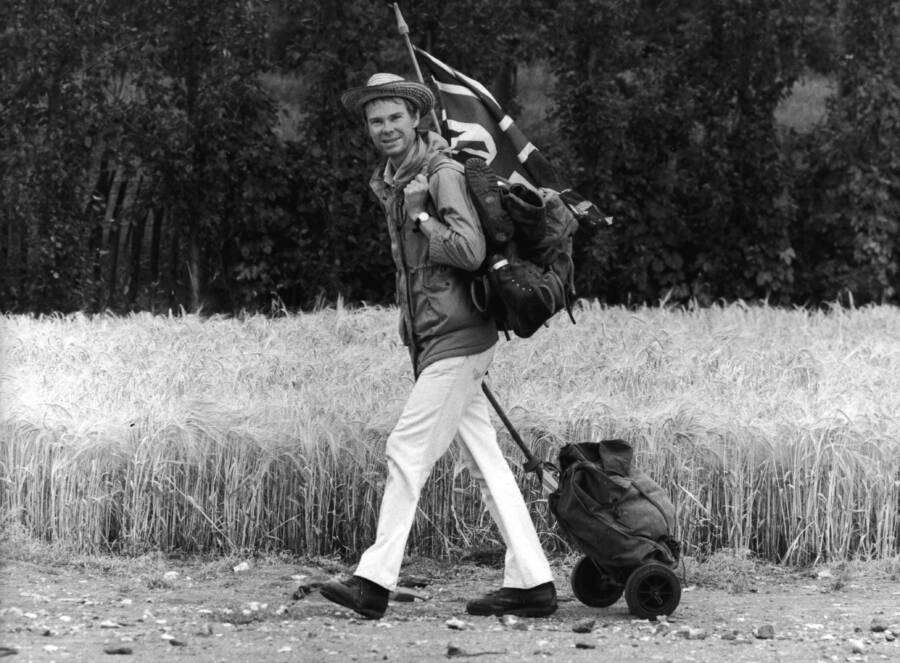 Express Newspapers/Getty ImagesGeorge Meegan, pictured in the early 1980s, during his historic walk across the Western Hemisphere.

After retiring from the United Kingdom’s Merchant Navy in 1976, George Meegan soon set off on a remarkable seven-year journey. In a feat that had never been done before, he trekked from the southernmost point of South America to the top of North America, an odyssey that saw him walk 19,019 miles and wear out 12 and a half pairs of hiking boots.

George Meegan secured a total of eight world records before completing his journey in Alaska in September 1983 before settling down with his wife and two children, then self-publishing his book, The Longest Walk: The Record of Our World’s First Crossing of the Entire Americas.

Meegan’s journey was far from easy, however. He started without any money or equipment, relying on the kindness of strangers to help get him from place to place. At one point, while he traversed the famously treacherous Darién Gap, he was even shot at, slashed with a knife, and attacked by his own guide.

But whatever happened, George Meegan never gave up. As he later told the Washington Post, “I think there’s something in every human being that has to try and go the limit.”

This is the story of George Meegan and the longest walk.

George Meegan was born on December 2, 1952, in the United Kingdom. His father left shortly after his birth, and his mother died of cancer. Meegan was adopted by his mother’s brother, which left him with a sense of gratitude and indebtedness, something that he always felt he had to “pay back,” according to Geographical.

As a young boy, Meegan was an avid reader of adventure and survival stories. He has written that his first dream, at the age of eight, was to become a cub scout. Determined to make his dreams of adventure happen, he dropped out of elementary school to pursue the adventurer’s life.

“We were expected to be factory fodder,” he told Geographical. “But I made a break.”

He joined the Sea Scouts, and eventually the British Merchant Navy, traveling around the world both ways by the time he was 18.

According to the traveler himself, he was unfit and had terrible acne on his shoulders “such that I was a bloody mess within 4-hours.”

But by his mid-20s, it seemed Meegan had already exhausted the possibilities of typical adventure. He longed for something new, something that had never been done before. 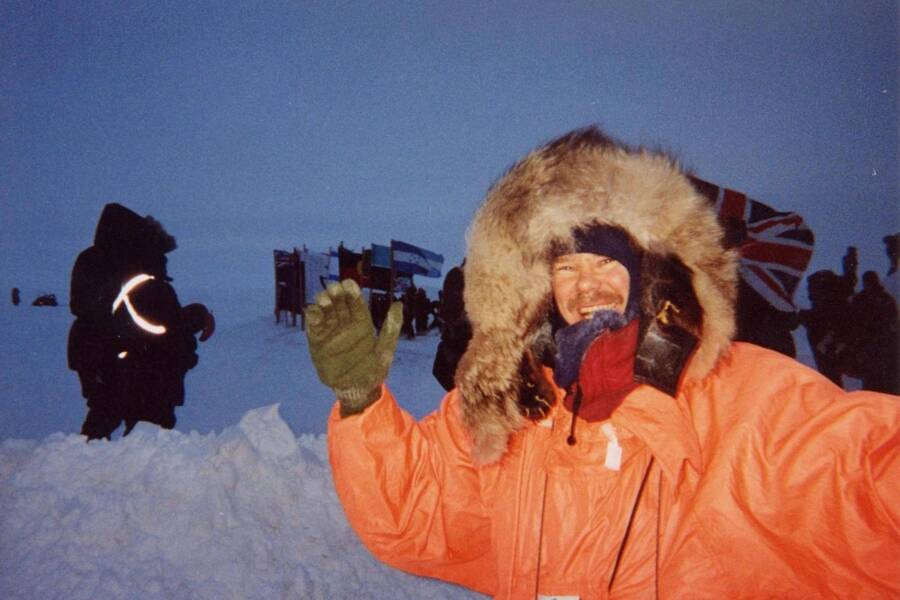 One day at sea, while looking at a map of the world that sat on the bulkhead of his naval vessel, inspiration struck him: He would voyage across the Americas on foot, a feat no man had accomplished before.

He visited the Brigham & Cowan shipyard and had two carts constructed that carried him and his girlfriend, Yoshiko Matsumoto, to Tierra del Fuego at the southernmost tip of South America. That was where he began his long journey.

Almost immediately, Meegan ran into trouble. He and Yoshiko started their journey in Tierra del Fuego in January of 1977, but only 300 yards into their walk, Yoshiko broke down crying. Apparently, an error in translation — Yoshiko was Japanese — led her to believe they would be making their journey by bus.

They stopped near a damp bush while he consoled her, only for a robber to approach them with a gun in his hand. Somehow, though, they managed to escape unharmed — something that would become a bit of a trend for Meegan. 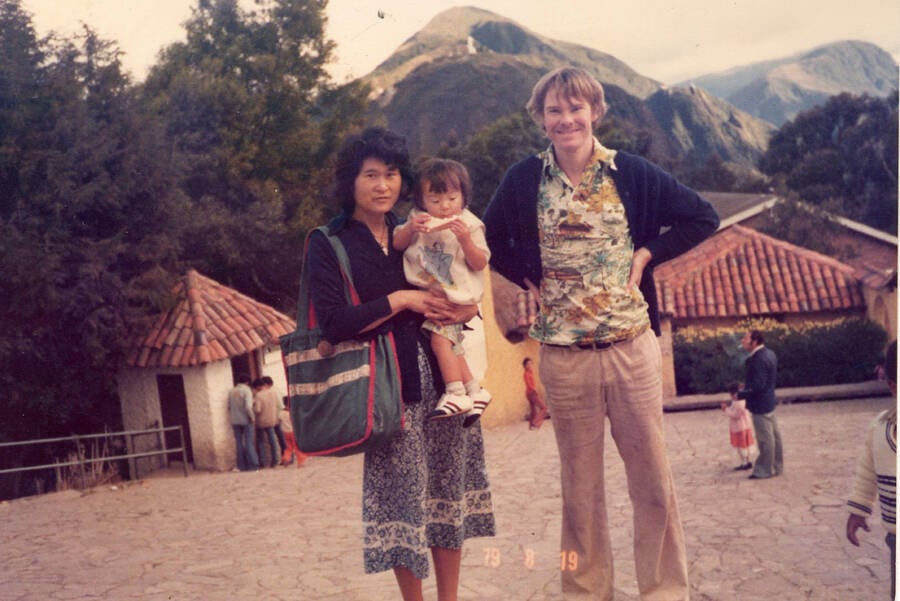 George MeeganMeegan with his wife Yoshiko and their daughter Ayumi, a Japanese word for “walk.”

Eventually, Yoshiko realized she would be unable to keep up with Meegan’s 25-mile-a-day pace and began hitchhiking ahead of him, setting up camp and holding onto their belongings.

“Looking for that tent at night kept me going,” Meegan told The Irish Independent. “We’d flash tiny flashlights at each other over the distance. We had a happy reunion every night.”

Eventually, the couple married at a police station in Mendoza, and Yoshiko returned to Japan to give birth to their first child, a daughter named Ayumi — Japanese for “walk.” It would be another year and a half before Meegan saw his family again, when they reunited in Panama.

As his journey continued, Meegan found himself running lower and lower on funds, supplies, and mental and physical energy.

He frequently struggled to afford his “daily fix of an onion,” and after surviving an attack in the Darién Gap, spent a night dripping wet in a small hut sniffing a bar of soap, “hoping the smell would somehow keep [him] in contact with a real world [he] knew must exist somewhere outside.” 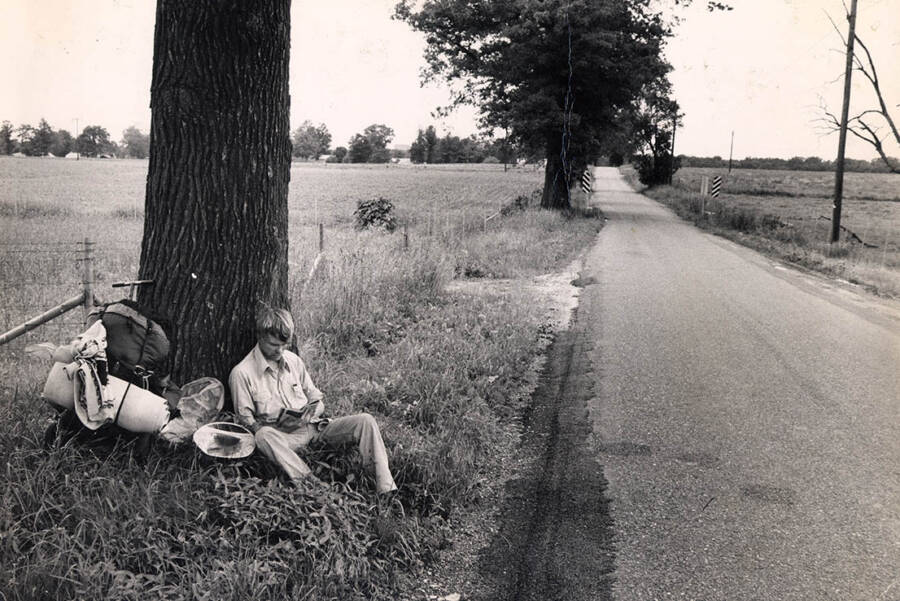 George MeeganMeegan relaxing by a tree in Maryland.

“Some have envied my freedom,” he wrote during his travels. “But few could see the prison I had made for myself.”

When he finally reached Texas, his brother Anthony greeted him with a pack of condoms. By this point, Yoshiko had become pregnant with their second child, Geoffrey Susumu (Susumu is Japanese for “keep going”), after their reunion in Panama.

Meegan’s brother’s gift served as something of a wake-up call — as his journey neared its end, he would need to find a way to support his family.

As Meegan journeyed across the United States, he sat down for interviews with several national publications and signed a book contract, seeking to make himself financially secure for his family. At one point in 1981, he even met Jimmy Carter in Carter’s Georgia home. 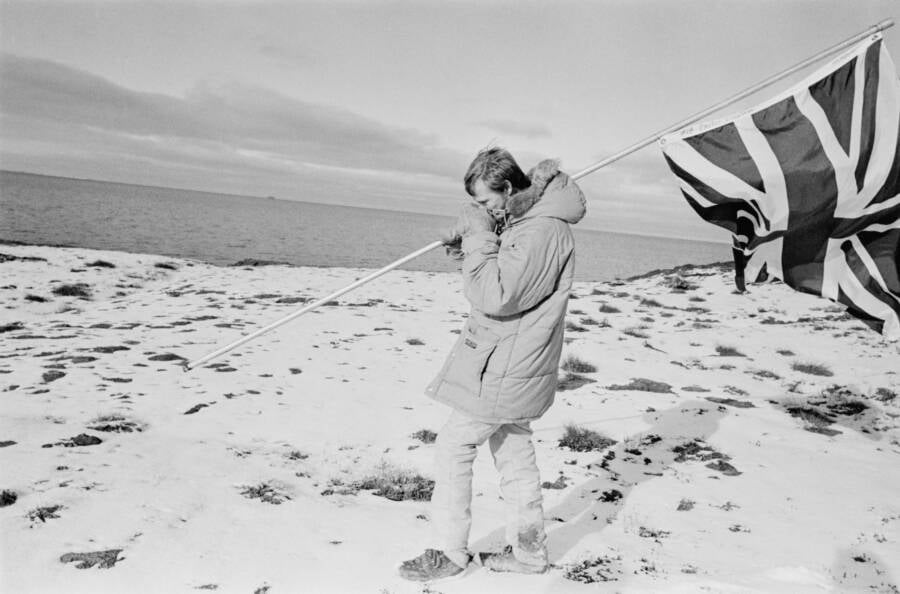 By 1982, Meegan was crossing into Canada towards the Alaskan Highway, and in 1983 Yoshiko once again joined him for the last stretch of the trip.

His long journey reached its end in September 1983 as Meegan planted his final flag into the frozen earth, completing his 19,019-mile walk, feeling, per Geographical, “not an inkling of the glow of victory, only sad, sad loss.”

Life After Completing The Longest Walk

For a time, Meegan’s difficulties continued. His book deal fell through when the publisher folded, and the press in the U.K. didn’t seem to share the same excitement for his journey as the American publications did.

But the most disheartening thing wasn’t that Meegan never achieved substantial fame or wealth. It was that the age of British exploration seemed to have lost its grip on the people back in his hometown of Rainham.

Still, he remained hopeful that his walk could represent a kind of freedom that most people seemed to have forgotten. 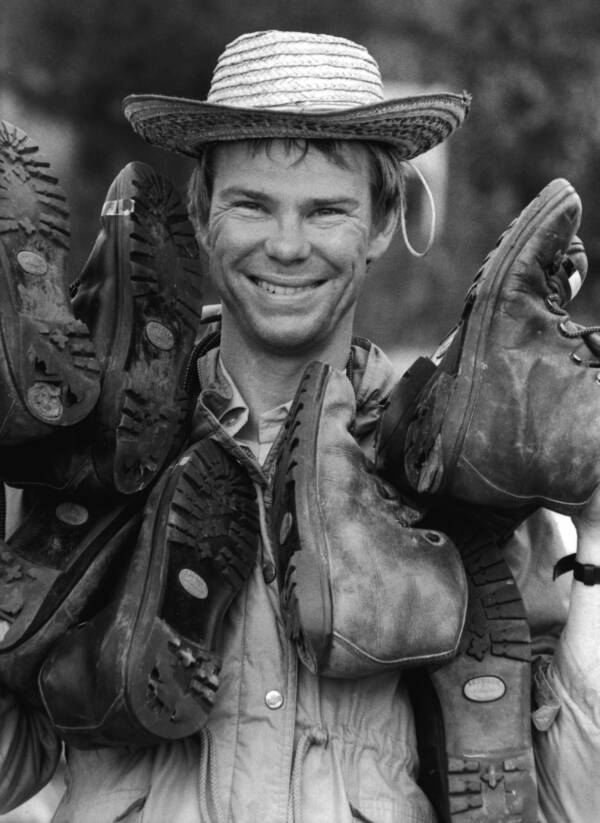 Express Newspapers/Getty ImagesGeorge Meegan holding some of the 13 pairs of boots that he wore as he journeyed along the Western Hemisphere.

“This walk is a celebration of freedom,” Meegan told UPI. “It was achieved without funds and without sponsorship. It was made possible by the 10,000 acts of kindness shown me by the people of this world.”

He eventually moved to Japan where he worked as a teacher with a school curriculum that was radically culture-based, as he also fought for the protection of indigenous language and culture in Alaska.

“This journey is not just for Britain,” he told The Irish Independent. “It’s for the people of all these nations. I want them to know I’ve never forgotten them. I’ve met desperate people whose only horizons are prison walls… I hope my trip reminds them that freedom exists.”

After reading about George Meegan’s incredible journey, read about Leif Erikson, the Viking explorer who set foot in America 500 years before Columbus. Then, learn the story of Hasekura Tsunenaga, the samurai who traveled the world and became a Roman aristocrat.