Meet Hasekura Tsunenaga, The 17th-Century Samurai Who Traveled The World And Became A Roman Aristocrat

In 1613, Hasekura Tsunenaga set out from Japan on an expedition that would take him to California, Mexico, and most of Europe. 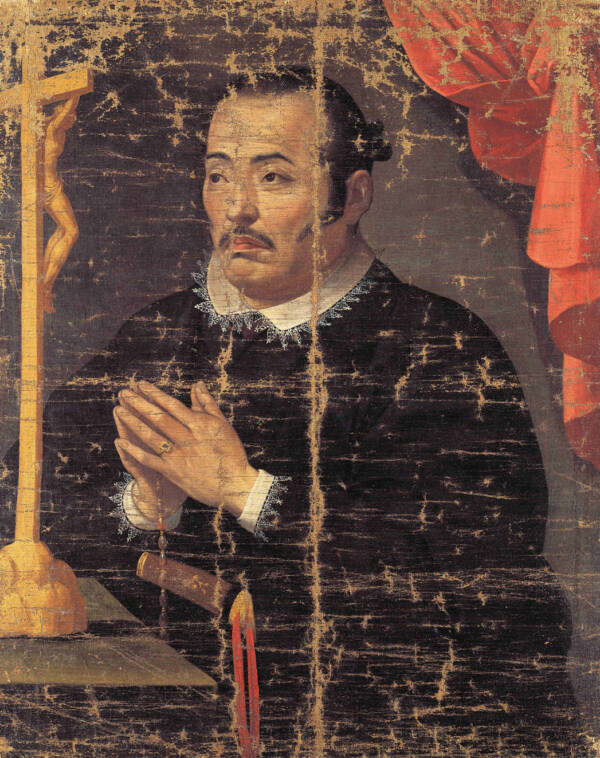 A 17th-century samurai set off on a quest to earn riches and spiritual guidance for his emperor–and restore his family’s honor in the balance. He circumnavigated the globe, became part of the first Japanese group in Cuba, met the Pope, helped begin a branch of Japanese settlers in Spain (still thriving today), and even became a Roman citizen.

Hasekura Tsunenaga’s life sounds like the stuff of a particularly imaginative manga or Akira Kurosawa epic — but he really existed. He set off on this mission (the only of its kind going from East to West) for two official reasons: to establish trade deals with European powers and to source missionaries from Christian lands.

The mark he left on the world as an adventuring samurai can still be felt four centuries later, and on nearly as many continents. This is the story of Hasekura Tsunenaga, the samurai who became a Roman aristocrat. 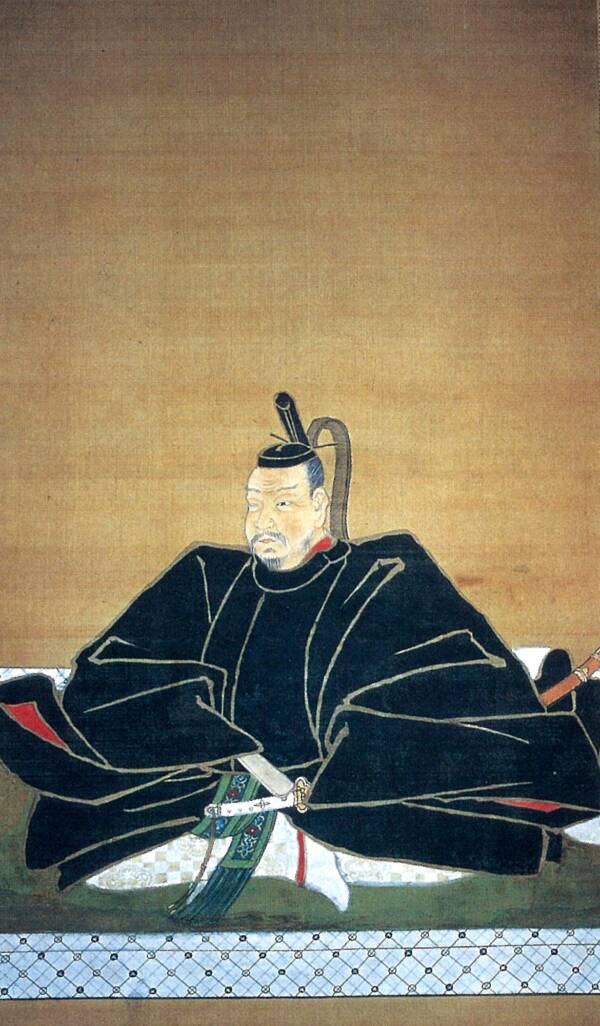 Hasekura’s early life remains shrouded in obscurity. He descended from Imperial stock — the son of a mid-level official found guilty of corruption and forced to commit suicide. Ordinarily, Hasekura would have shared a similar fate.

Date Masamune, Hasekura’s feudal lord had the ship the San Juan Bautista made expressly for a voyage to ask the heads of states in the West to trade with Japan, particularly across the Pacific in New Spain.

Another official reason for the trip was to request more Christian missionaries. The latter was mostly a political move to smooth over relations between the Christian kingdoms and Japan — after a 1597 massacre of 26 Christians in Japan caused tension. 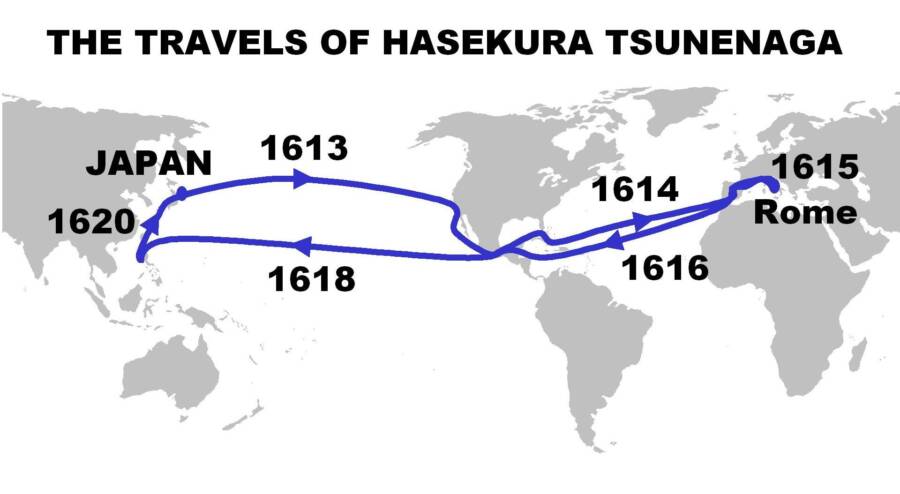 Some surreptitious motives possibly woven into the manifesto include research into mining techniques in Mexico and military strategies used by the Europeans.

Regardless of the intentions, Hasekura set sail with his crew aboard the San Juan Bautista in 1613. He wouldn’t see Japan again until 1620.

A Samurai In New Spain

When the ship reached the other side of the Pacific, they landed in present-day California at Cape Mendocino, then part of New Spain. From there, they sailed down the coast to Acapulco, where they continued over land. 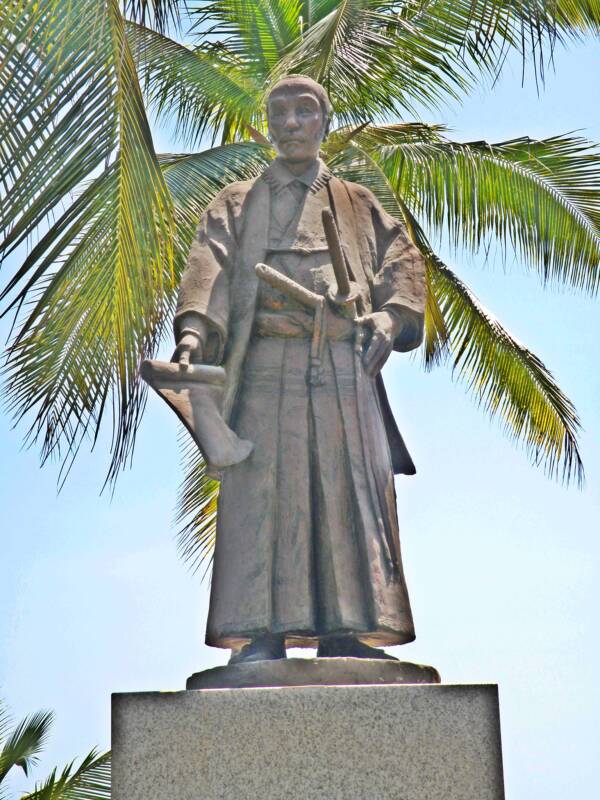 Eduardo Francisco Vazquez MurilloA statue of the samurai in Alcapulco.

Eventually, Hasekura’s entourage arrived in Veracruz, then set off for Cuba — where they were the first Japanese people to set foot on the island. Cuba would become known for a rich Japanese influence in later centuries, largely due to this expedition.

In 1614, Hasekura and his party crossed the Atlantic Ocean to arrive in Spain.

Hasekura’s time in his first European country was full, if not entirely fruitful. The court of King Philip III and the Spanish Council welcomed him as a visiting diplomat. Hasekura was even baptized into Catholicism, taking the name Francisco Felipe Faxicura. 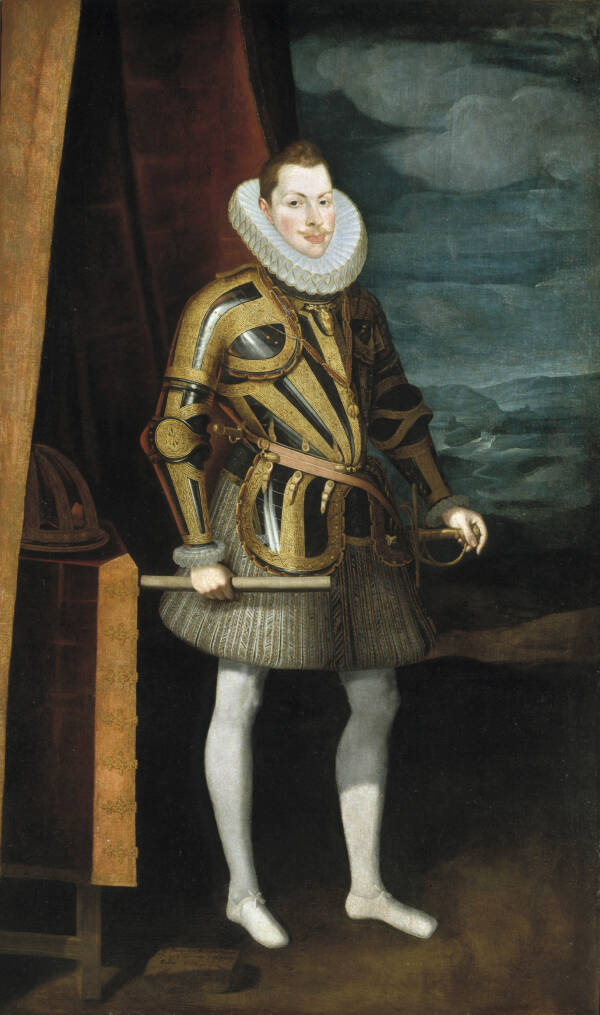 Museo del PradoHasekura’s crew felt so welcomed in Spain that some of them stayed. Their descedents live there today.

Despite the conversion, the new “Faxicura” was unable to convince the Spanish politicians to open up trade with Japan or send more missionaries, likely due to the increasing hostility towards Christians in Hasekura’s homeland.

The samurai was unable to get a piece of Spain to bring home–but some of Japan stayed in Spain. As of 2008, 650 families in Coria del Rio with the surname “de Japon” (meaning “of Japan”) could trace their lineage back to members of Hasekura’s entourage who decided to remain in Spain. 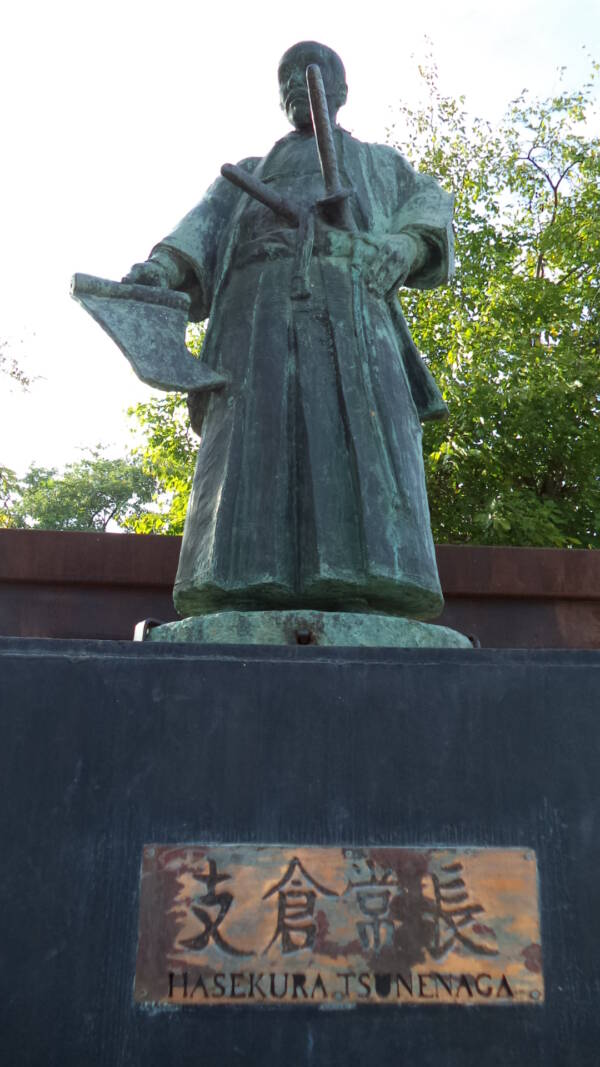 From the court of Spain, the Japanese envoy traveled along the Mediterranean en route to the Pope in Rome. From their stop in St. Tropez, along France’s Côte d’Azur, a glimmer of the wondrous impression they made was recorded by an unknown woman:

“They never touch food with their fingers, but instead use two small sticks that they hold with three fingers,” the woman wrote, likely her first interaction with chopsticks.

“They blow their noses in soft silky papers the size of a hand, which they never use twice, so that they throw them on the ground after usage, and they were delighted to see our people around them precipitate themselves to pick them up…Their swords cut so well that they can cut a soft paper just by putting it on the edge and by blowing on it.”

Hasekura’s next stop was Italy. Arriving in the port city of Civitavecchia, he became friendly with the locals. The samurai and his entourage made such an impression that 400 years later the town remains a sister city to Ishinomaki, Japan.

The entourage moved inland to the main event: visiting the Pope in Rome. Despite hailing from a land outside Christendom, Hasekura’s arrival was met with pomp and circumstance, and the samurai was escorted to the Vatican on horseback. 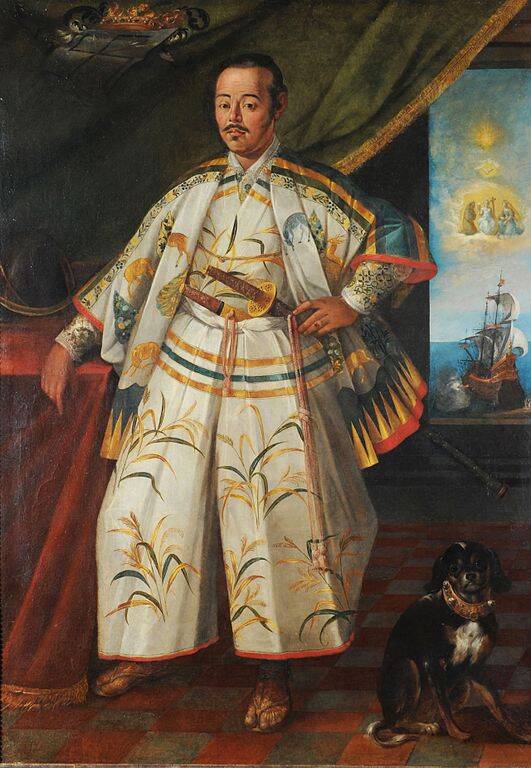 Galleria BorgheseHasekura was welcomed in Rome in splendor.

Hasekura presented the Holy Father with a letter from his lord, containing mostly standard flatteries. The most profound, however, read:

“I am willing that my people should become Christians. Send me therefore some kind fathers who belong to the order of St. Francis. I shall treat them kindly…I send some of the products of Japan. Hereafter please send me some good from your land.”

There was the crux of the voyage: religion by acquiescence, and trade by desire.

On one hand, Hasekura’s rendezvous with the Holy Father was incredible. The samurai gifted Pope Paul V documents from Lord Masamune promising to allow Christianity to flourish in the borders of Japan. In exchange, Tsunenaga received honorary Roman citizenship, a coveted title given only to the lucky few. 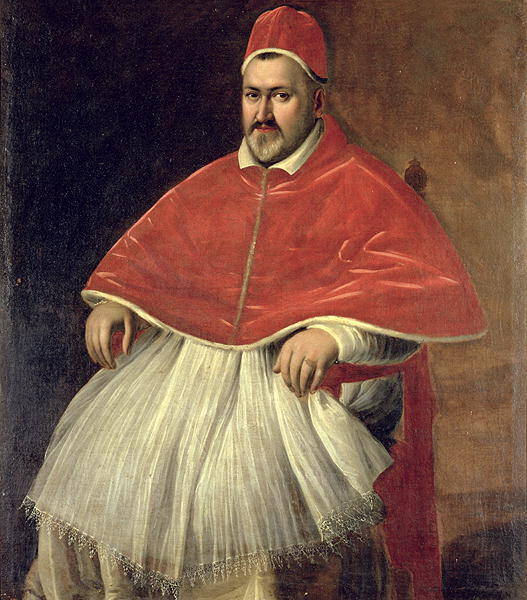 Hasekura became more than a Roman. There is evidence to believe that with the crest bestowed upon him — featuring a crown — the samurai was also welcomed into the Roman aristocracy. This son of a dishonored father became a peer to the likes of Julius Caesar and Mark Antony.

As fabulous as his time in Rome proved personally, politically the newly-minted Roman had very little luck.

Hasekura was finally heading back to Japan.

Days after Hasekura’s return home, an interdiction against Christianity was issued. All Christians in Japan were ordered to abandon their faith. Those who did not recant faced exile or execution.

Date Masamune, the feudal lord who organized Hasekura’s trip, distanced himself from Christianity and began referring to Western countries in his official correspondence as “Southern Barbarian nations.”

Like a loose thread caught in a wheel, Hasekura Tsunenaga’s deeds were undone. Japan sealed itself shut for nearly two centuries, effectively ending Japan-European trade until the 19th century. People leaving Japan were even executed.

Hasekura himself died of an illness in 1622, just two years after returning to Japan. To this day, the location of his grave remains unknown.

Executions cut through Hasekura’s legacy like a knife. After his death, his wife, son, and even servants were killed for their Christian faith. 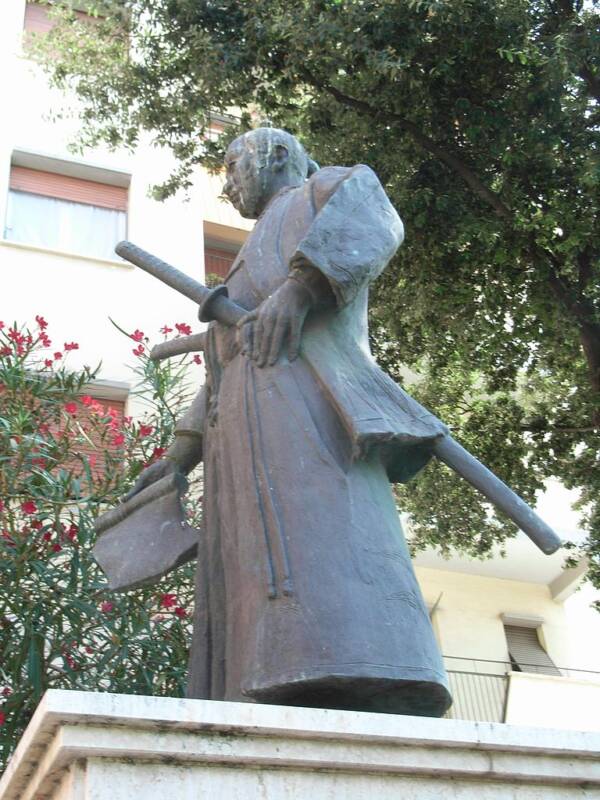 NotaflyA statue of the traveling samurai near where he arrived in Italy.

The voyage Hasekura spent seven years on and crossed two oceans for was walled into a homogeneous Japan.

But, the honor Hasekura traveled the world for hasn’t dissolved completely. Statues of the samurai dignify land from Porto Livorno in Italy to Havana. His trips may have even directly brought the fashion of decorated screens to Mexico, igniting a fashion called biombo in Spanish coming from the Japanese byobu.

Now that you’ve read about Hasekura Tsunenaga, look at these 50 amazing photos from the Imperial era and read the story of Onna Bugeisha, one of Japan’s only female samurai.