In 1962, Soviet Colonel Oleg Penkovsky defied his country to save the world from nuclear war — then paid for his heroism with his life.

In October 1962, the U.S. and U.S.S.R. were on the brink of nuclear war after Soviet nuclear missiles were spotted in Cuba.

While President Kennedy and Soviet Prime Minister Nikita Kruschev dared each other to launch nuclear weapons on TV, one largely-forgotten Soviet spy changed the course of history from the shadows.

Though much of America’s knowledge of the Soviet nuclear missile installations in Cuba came from spy plane photographs, one man defied his country to bring America vital intelligence that helped prevent nuclear war. 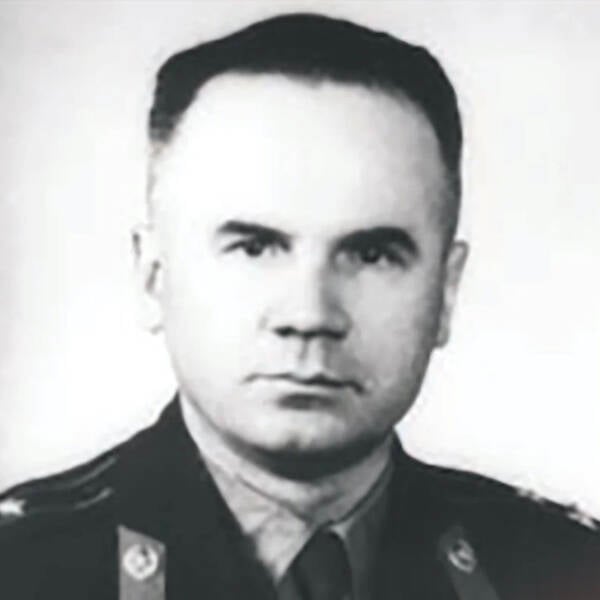 Wikimedia CommonsOleg Penkovsky’s father died in the Russian Revolution. Years later, Penkovsky himself would try to halt the Soviet spread of communism.

Oleg Penkovsky saved the world from mushroom clouds and untold deaths in the fall of 1962. Without the senior Soviet military intelligence officer — or his active role as a double agent during that time — the Cold War could have gotten very hot.

How Penkovsky Became A Double Agent

On April 23, 1919, Oleg Vladimirovich Penkovsky was born in Vladikavkaz, Russia. The future double agent’s father died that same year fighting against the communists in the Russian Revolution.

However, Penkovsky would grow up to join the Red Army in 1937. By that time, the army’s main concern was crushing Nazi Germany, and during World War II, Penkovsky fought as an artillery officer. 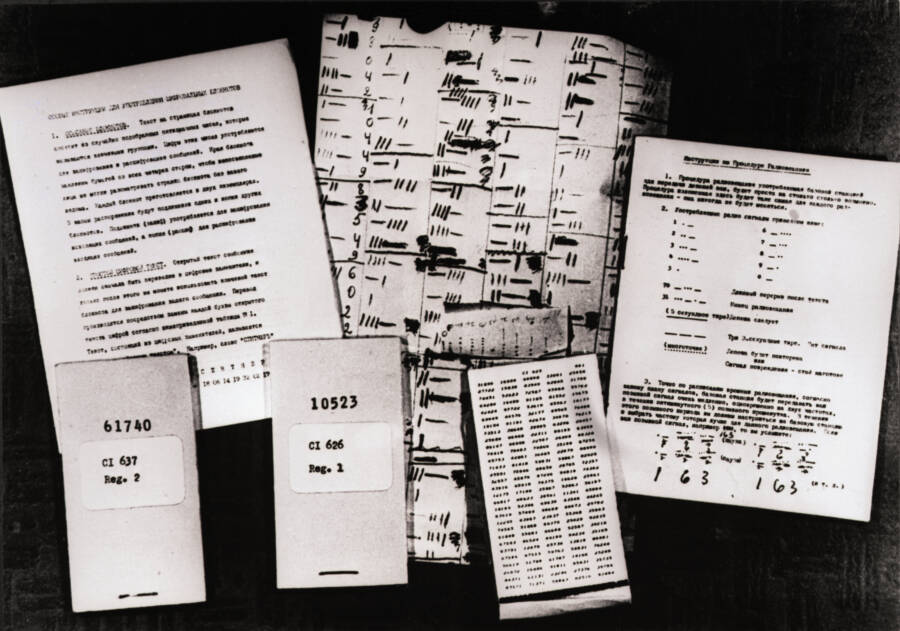 Bettmann/Getty ImagesPenkovsky’s debriefing sessions with MI6 and the CIA totaled up to 140 hours. Over the course of his espionage, he delivered rolls of film, classified documents, and over 5,000 photos.

After being wounded in battle in 1944, Penkovsky left the army and joined the renowned Frunze Military Academy. He graduated from the strenuous academy in 1948 and promptly joined the GRU.

In simple terms, the GRU was Soviet army intelligence. It looked outward for any external threats, and employed people capable of subterfuge and turning potential pawns into assets. Compared to the KGB, which focused squarely on crushing internal dissent, the GRU had more of a geopolitical impact.

This jump from the army to the GRU set the course for the rest of Penkovsky’s life. After attending the Military Diplomatic Academy from 1949 to 1953, he officially became an intelligence officer and worked in Moscow.

A mini-documentary about Oleg Penkovsky and his efforts during the Cold War.

A GRU colonel by 1960, he served as deputy chief of the foreign section of the State Committee for the Coordination of Scientific Research for the next two years. In this role, he amassed and assessed technical and scientific intel on the West — while growing increasingly disillusioned with his own country.

That year, Oleg Penkovsky passed a message to the CIA via a pair of American tourists that read, in part, “I ask you to consider me as your soldier. Henceforth, the ranks of your armed forces are increased by one man.” 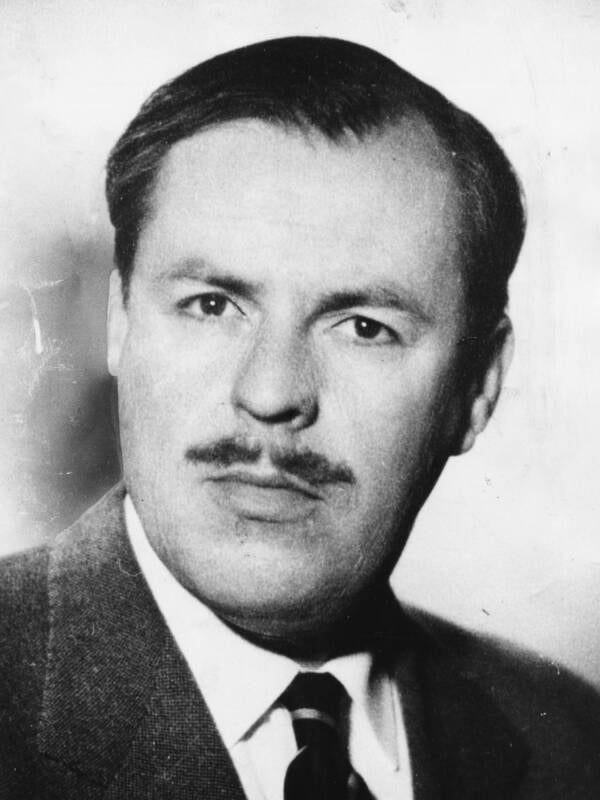 Central Press/Hulton Archive/Getty ImagesBritish spy Greville Wynne was Penkovsky’s contact and intermediate to MI6. He was arrested for espionage in Budapest on Nov. 16, 1962.

The British intelligence agency MI6 (then known as SIS) had already been hard at work to infiltrate the Soviet Union’s State Committee for Science and Technology, however. More than a year before the crisis, they had recruited a civilian, British businessman Greville Wynne, to do so.

Wynne had founded an export business of industrial engineering products years earlier, and the international travel involved provided excellent cover for espionage. During one of Wynne’s trips to London in April 1961, Penkovsky handed him a hefty package of documents and film he passed along to MI6.

MI6 was in disbelief — as were the Americans they gave it to. After Penkovsky urged Wynne to arrange a meeting with the entities in question, he officially became a Western spy with the codename “Hero.” 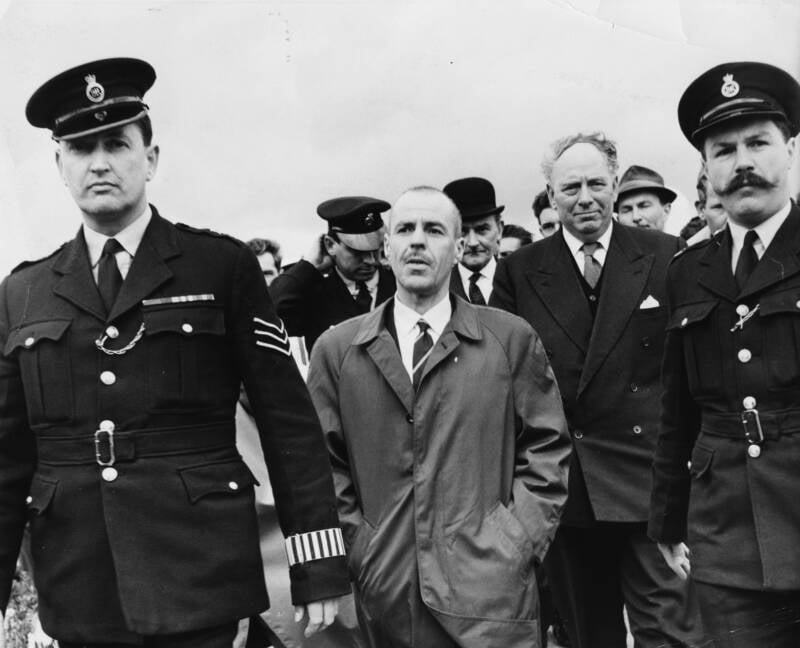 Now a legitimate double agent, Oleg Penkovsky spent the next two years providing his Western contacts with stolen top-secret documents, war plans, military manuals — and nuclear missile diagrams. These were routinely smuggled through contacts like Wynne and given the CIA codename “Ironbark.”

Penkovsky stashed the documents in packs of cigarettes and candy boxes which he hid in agreed-upon public places, in what are known as “dead letter drops.” This method allowed him to transfer items to his Western handlers without attracting attention.

Besides Wynne, Penkovsky had another contact, Janet Chisholm — the wife of Rauri Chisholm, a British MI6 officer stationed in the Moscow embassy.

As Penkovsky’s position necessitated travel to Britain, the Russians initially didn’t suspect him of espionage. He provided the CIA and MI6 with extensive debriefing sessions totaling up to 140 hours, delivered invaluable documents, and over 5,000 Soviet photos.

Footage of the trial of Oleg Penkovsky.

These produced around 1,200 pages of transcripts which the CIA and MI6 delegated 30 translators and analysts to focus on. His work helped American intelligence confirm that Soviet nuclear capabilities were vastly inferior to America’s arsenal — information that would prove vital in resolving the Cuban Missile Crisis.

The Cuban Missile Crisis began on Oct. 14, 1962, when a U-2 spy plane photographed missile installations in Cuba — confirming the Soviets were gearing up with capabilities of their own. Over the two weeks that followed, John F. Kennedy and Nikita Khruschev engaged in tense negotiations, but the Americans had an ace up their sleeves.

Thanks to Penkovsky’s “Ironbark” files, CIA analysts were able to accurately identify the Soviet missiles that had been photographed in Cuba and give President Kennedy precise reports on the range and strength of those weapons.

Penkovsky’s stolen files showed that the Soviet arsenal was smaller and weaker than the Americans had previously thought. Additionally, the files revealed that Soviet guidance systems weren’t yet functional, nor were their fueling systems operational. 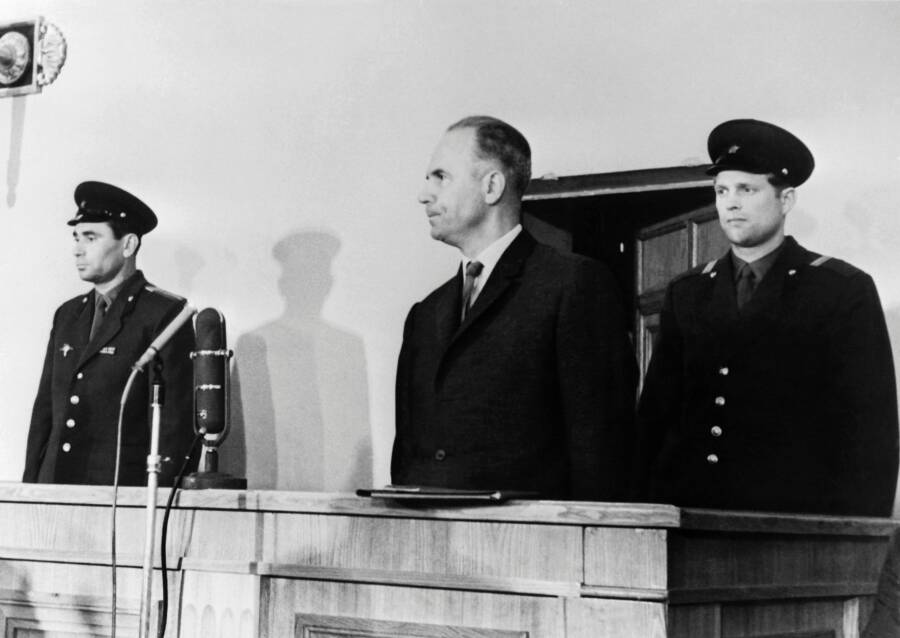 AFP/Getty ImagesPenkovsky at his public trial in Moscow. May 11, 1963.

Between the information from Oleg Penkovsky and the U-2 pilot’s photos, America now knew the exact location of the Soviet launch sites, and most importantly, their weak long-range capabilities. This knowledge gave Kennedy the upper hand he needed to successfully negotiate away from the brink of nuclear war.

After 14 days of strained negotiations, on October 28 Khruschev agreed to withdraw Soviet weapons from Cuba and the world breathed a sigh of relief. 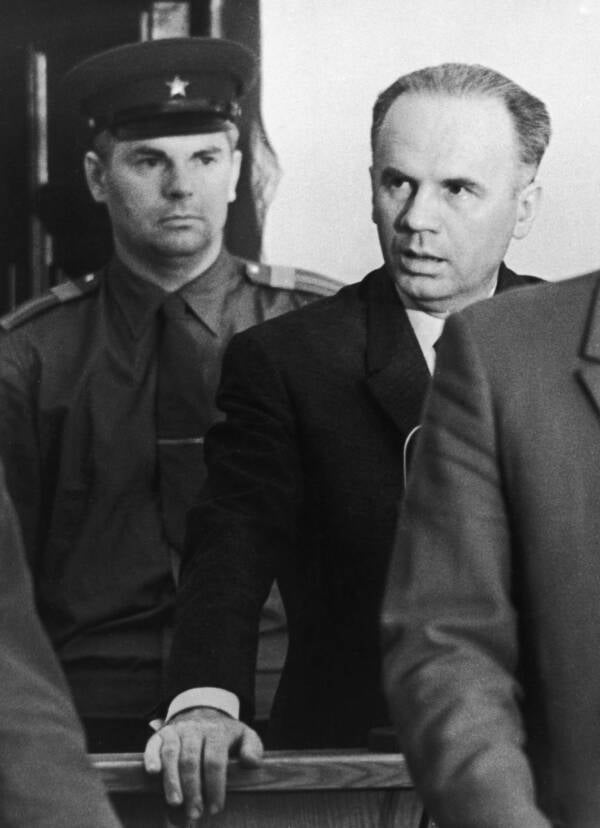 Stuzhin & Cheredintzev/Keystone/Hulton Archive/Getty ImagesSome believe Penkovsky was burned alive as Soviet punishment for his treasonous espionage. Officially, he was shot to death.

For Oleg Penkovsky, however, his world-altering espionage work hastened his death. Six days before Kennedy’s successful diplomatic resolution of the crisis, Penkovsky was arrested.

It remains unclear to this day exactly how Penkovsky was found out. One theory links his arrest to the spouse of a contact. Janet Chisholm’s husband, Rauri Chisholm, worked with a man named George Blake — who happened to be a KGB agent.

It’s thought that once Blake implicated Penkovsky, the KGB began watching him from apartments across the river from his home and confirmed he was meeting with Western intelligence.

His arrest was followed by a public trial in May 1963. Espionage charges in a Soviet court were not to be taken lightly — and Penkovsky was sentenced to death. Chief KGB interrogator Alexander Zagvozdin said Penkosvky was “questioned perhaps a hundred times” and then shot.

GRU agent Vladimir Rezun, however, claimed in his memoir that he saw footage of Penkovsky being strapped to a stretcher inside of a crematorium — and burned alive. In either scenario, the double agent died on May 16, 1963. His ashes were allegedly dumped in a mass grave in Moscow.

After reading about how Soviet spy Oleg Penkovsky staved off nuclear war, learn about Vasili Arkhipov, another unsung hero of the Cuban Missile Crisis. Then, learn about Stanislav Petrov, a Soviet military man who saved the world from nuclear war in 1983.