On July 15, 1997, Gianni Versace left his Miami mansion to make a trip to a newsstand. When he returned home, a deranged serial killer was waiting for him outside his front door. 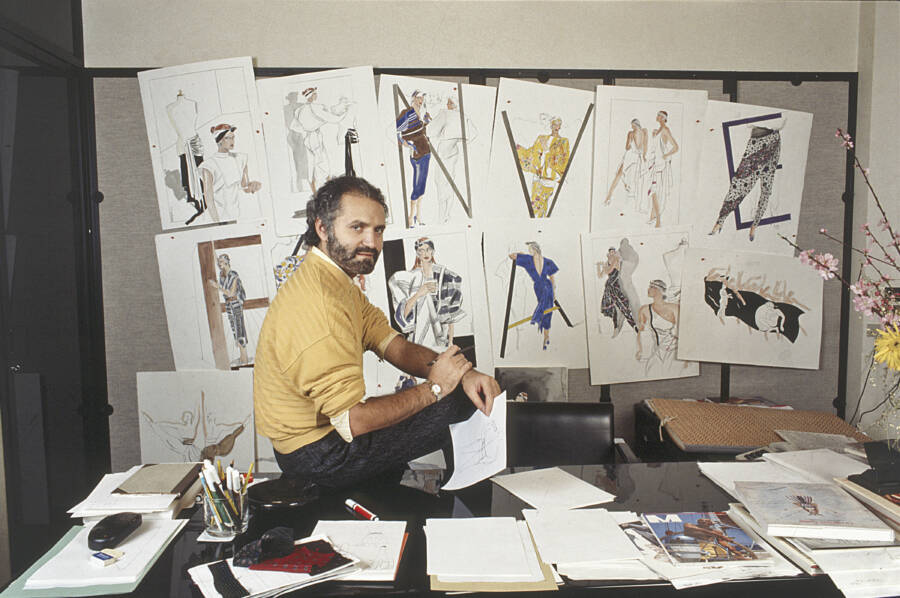 The day that Gianni Versace died started like any other. The fashion designer woke up early, went for a stroll in his South Beach, Florida neighborhood, and returned home. But a killer was waiting for him there.

As Versace mounted the steps to his mansion, a 27-year-old man named Andrew Cunanan lurched forward. No stranger to violence, Cunanan had already killed four men in 1997. By that July day, he’d murdered two men he knew and two he allegedly didn’t. Cunanan’s killing spree had attracted so much attention that he was even on the FBI’s Ten Most Wanted list.

Before Versace had a chance to react, Cunanan took his fifth victim. He raised his gun and fired two bullets at point-blank range into the fashion designer’s head. Inside the mansion, Versace’s boyfriend later said that his blood “turned to ice” as the gunshots shattered the morning calm.

But though witnesses had seen Cunanan, and police eventually found the killer after he took his own life about a week later, mysteries endured about Gianni Versace’s murder. Namely, what drove Cunanan to kill him?

How Gianni Versace Rose To Fame

Born on December 2, 1946, in Reggio Calabria, Italy, Giovanni Maria “Gianni” Versace grew up in the world of fashion. His mother, Franca, was a dressmaker, and Versace spent much of his childhood watching her work in her shop. By the time he was a teenager, he had started working with her.

“Designing came to me,” Versace said. “I didn’t have to move.”

But Versace had dreams larger than his mother’s boutique. By 1972, he was working with Italian fashion houses like Genny, Complice, Mario Valentino, and Callaghan. And in 1978, he opened his own boutique in Milan.

In the 1980s and 1990s, Versace’s striking fashions — which combined classical designs with more playful elements — skyrocketed him to fame. 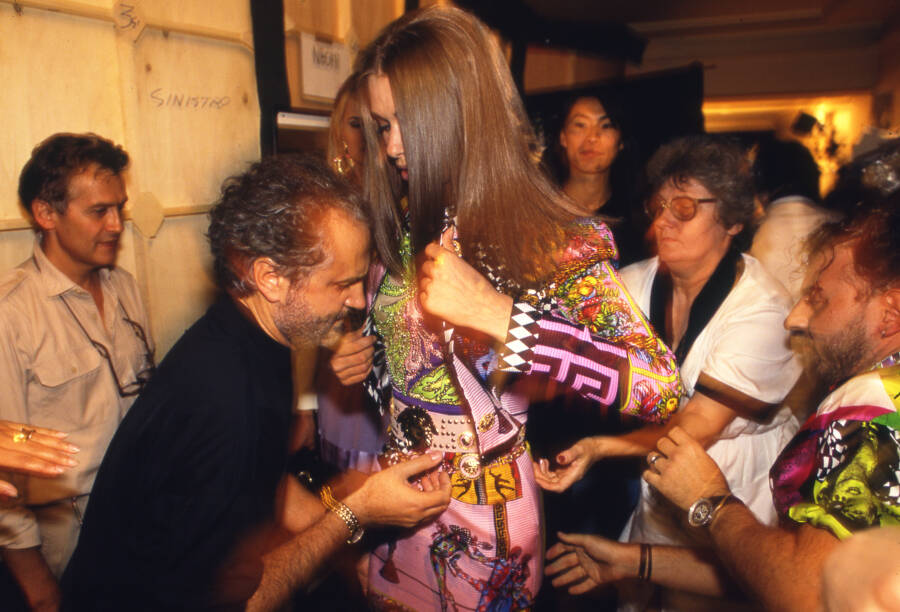 John van Hasselt/Sygma via Getty ImagesGianni Versace making a last-minute adjustment to one of his dresses at a 1991 fashion show.

“He was the first to realize the value of the celebrity in the front row, and the value of the supermodel, and put fashion on an international media platform,” Vogue editor Anna Wintour explained. “He relished media attention and masterminded it, and everybody followed in his footsteps.”

Soon, Versace and his siblings were running a multimillion-dollar fashion empire. Looking for a place to relax and unwind when he wasn’t working, Versace found an oasis from his chaotic life in South Beach, Florida.

“The mood is very, very easy,” Versace said of South Beach in 1993, after he’d dropped almost $3 million for a mansion called Casa Casuarina. “That is special and I don’t find the mood any place else in the world.”

By July 1997, Versace was at the height of his career. He had 130 boutiques around the world and had built an empire worth over $800 million.

He told elaborate lies as a teenager to make himself seem richer and later dropped out of college to pursue relationships with wealthy, older men.

After breaking up with one of his affluent boyfriends in 1996, Cunanan started spiraling. And soon afterward, he began to kill.

In Minnesota on April 27, 1997, Cunanan murdered 28-year-old Jeffrey Trail, whom he had once described as his best friend and brother, with a hammer. Just five days later, he shot and killed 33-year-old David Madson, an ex for whom Cunanan had harbored strong feelings. 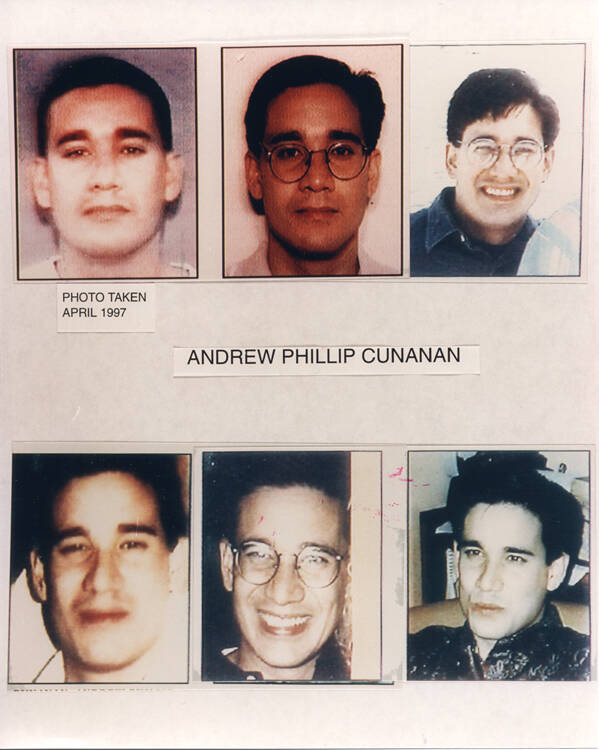 Wikimedia CommonsPhotos of Andrew Cunanan collected by the FBI.

From there, Cunanan made his way to Chicago, where he brutally tortured and murdered 72-year-old Lee Miglin on May 4. Miglin’s family claimed that this killing was random. But investigators weren’t so sure.

“Why would Cunanan go to Chicago, find Miglin, and torture him without some motive?” demanded Todd Rivard of the Chisago County Sheriff’s Department in Minnesota.

But Cunanan’s fourth murder did seem to be completely random. On May 9, Cunanan shot and killed 45-year-old William Reese, a Civil War cemetery caretaker, in New Jersey. Reese and Cunanan had no prior connection — and it seemed that the killer only wanted to steal Reese’s truck.

With the FBI on his tail, Andrew Cunanan made his way to South Beach, Florida. At some point during his murder spree, it seems that he began plotting the death of Gianni Versace and how he’d carry it out.

And on July 15, he’d show up at the fashion designer’s front door.

The Shocking Murder Of Gianni Versace

On July 15, 1997, the day of Gianni Versace’s death, the 50-year-old fashion designer got up early. He left Casa Casuarina around 8:30 a.m. and made a quick trip to a local newsstand to pick up some magazines.

Dressed casually in a white t-shirt, black shorts, and black sandals, Versace bought copies of BusinessWeek, Vogue, Entertainment Weekly, People, and The New Yorker. Then he walked back home.

But Versace would never make it to the front door.

As he started up the steps to his mansion, Andrew Cunanan made his move. He raised his .40-caliber handgun and shot the fashion designer twice in the head. Then, he raced away from the area. 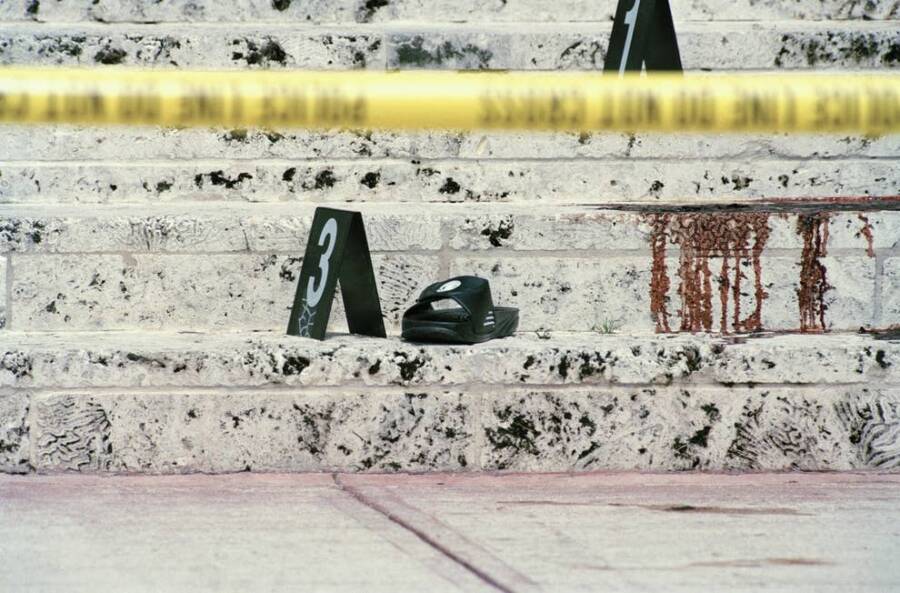 Getty ImagesBlood and a lone sandal line the steps where Gianni Versace was killed on July 15, 1997.

Upon hearing the double shots, a witness named Eddie Bianchi rushed to the scene and found Versace lying on his back. “We were right there watching and there’s nothing you can do,” Bianchi said. “His blood was coming out like crazy. He shook a little bit and stopped moving.”

Inside the mansion, Versace’s boyfriend of 15 years, Antonio D’Amico, had been waiting for him to return. When he heard the gun go off, he raced outside with their butler and found Versace on the steps.

“I saw Gianni lying on the steps, with blood around him,” D’Amico recalled. “At that point, everything went dark. I was pulled away, I didn’t see any more.”

Though Versace was raced to the hospital, the fashion designer was pronounced dead at 9:15 a.m. Then, the quest to find the killer — and answers for why he’d murdered Gianni Versace — began.

Following Gianni Versace’s death, investigators quickly realized that Andrew Cunanan had killed him. Near Casa Casuarina, they found the truck that Cunanan had stolen from William Reese. And next to the truck, they found clothing that matched eyewitness descriptions of the killer.

But it took much longer to find Andrew Cunanan himself.

Eight days after Gianni Versace’s murder, a houseboat caretaker found someone in a vessel three miles from Versace’s mansion. When they heard a shot, they called the police. Officers found Cunanan, dead by suicide.

Cunanan had used the same gun to kill himself that he had used to kill Versace and two of his other victims during his murder spree.

He’d left no note — no final confessions about why he’d killed the fashion designer. To this day, Versace’s family insists that it was a random attack. They say that Andrew Cunanan and Gianni Versace had no prior relationship.

However, not everyone is quite so sure. Vanity Fair journalist Maureen Orth, who wrote Vulgar Favors: Andrew Cunanan, Gianni Versace, and the Largest Failed Manhunt in U.S. History, claims that Cunanan and Versace had actually met a handful of times before Versace’s murder. 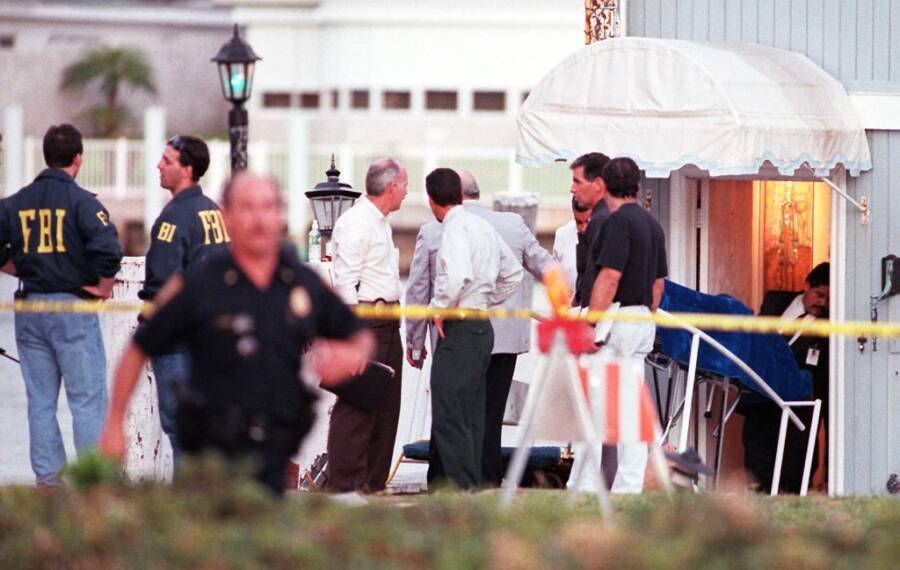 CHRIS BERNACCHI/AFP via Getty ImagesMedical examiners remove Andrew Cunanan’s body from the houseboat where he died by suicide.

According to Orth, Cunanan and Versace supposedly met at a San Francisco club called Colossus in 1990.

“I know you,” Versace allegedly said to Cunanan. “Lago di Como, no?”

“Thank you for remembering, Signor Versace,” Cunanan allegedly replied, though, as Orth notes, it’s unclear if there was “really anything to remember.”

Regardless, Cunanan later told the story to a friend. He claimed that he told the designer, “If you’re Gianni Versace, then I’m Coco Chanel!”

A friend of Cunanan also told Orth that he saw Cunanan and Versace together on another occasion. He alleges that a white limo pulled up beside him carrying Cunanan, Versace, and socialite Harry de Wildt. (However, it’s worth noting that de Wildt denied that this happened.)

Furthermore, Cunanan told multiple friends that he had a relationship with Versace. Cunanan was, of course, a known liar. But it is possible that the men crossed paths. Though they were from different worlds, both allegedly engaged in sex-for-hire rings. Thus, it’s not out of the realm of possibility that Cunanan, who engaged in sex work, found a wealthy client in Gianni Versace.

There’s even a weak theory that Cunanan killed his victims because he thought they may have given him HIV. However, an autopsy later revealed that Cunanan did not have HIV — and Versace’s family has always denied that the designer had HIV (though some have questioned their claims).

So, why did Cunanan kill Versace? The world will never know for sure. Andrew Cunanan took his own life without giving any explanation. And Gianni Versace died before he could tell his side of the story.

But whether the two men knew each other or not, many are convinced that Cunanan was jealous of Versace’s success. One FBI agent firmly believed that Cunanan killed Versace because he was “the wealthy, high-profile homosexual success story that Andrew Cunanan was never going to be.”

The Legacy Of A Doomed Designer

Gianni Versace’s death shocked the fashion world. His memorial service in Milan drew 2,000 people, including Princess Diana and Elton John, as well as designers like Calvin Klein and Marc Jacobs. Versace’s many friends remembered him as “a family man,” “fearless,” and “passionate.”

“My brother was the king,” said Gianni’s sister Donatella, who took creative control of Versace after her brother’s death, “and my whole world had crashed around me [when he died].”

But without Gianni Versace’s genius, his fashion line stumbled. It took years for the Versace brand — and the Versace family — to regain their footing after his murder. But their outlook has improved drastically in recent years. Fashion journalists even called 2017 “the year of Versace.” 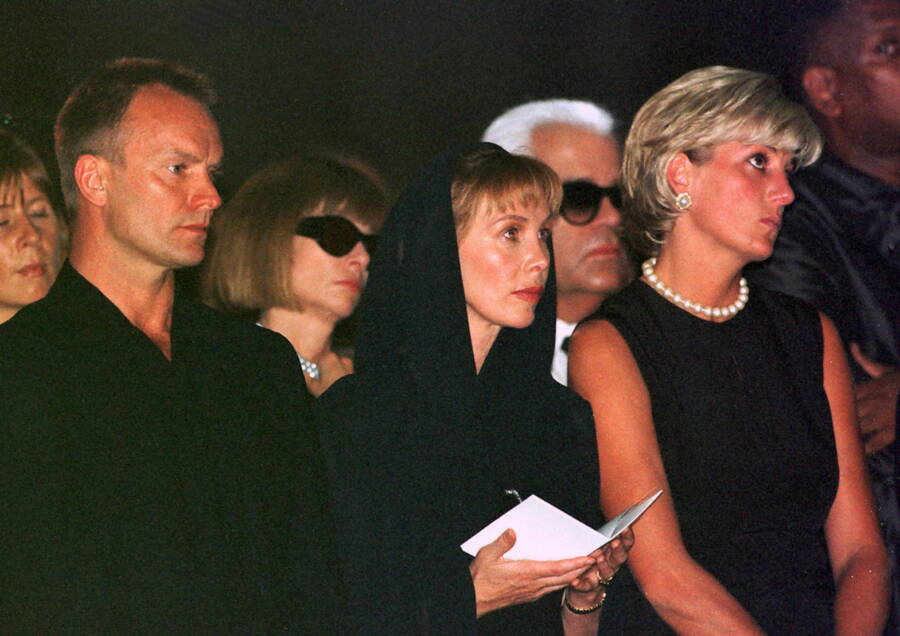 GERARD JULIEN/AFP via Getty ImagesSting and Princess Diana were among the mourners who attended Gianni Versace’s Milan memorial service in 1997.

“The Versace family has neither authorized nor had any involvement whatsoever in the forthcoming TV series about the death of Mr. Gianni Versace,” the family said in a statement. They called it a “work of fiction,” “full of gossip and speculation,” and “full of contradictions.”

In the end, many things about Gianni Versace’s death remain a mystery. Did he really know Andrew Cunanan? Or was Cunanan’s relationship with Versace just another one of the killer’s delusions?

But if those mysteries have lingered, then so has Gianni Versace’s vision. He transformed the fashion industry in the 1980s and 1990s, and his ideas about color, celebrity, and culture are still celebrated today.

Gianni Versace’s murder changed the fashion world. But his life did, too.