The Viking helmet is usually depicted with horns, but the Norse warriors really never wore them.

When you think of a Viking, what do you see? Probably one of the first things that come to mind is a fearsome helmet with two horns. But the story of the Viking helmet is much more complex than that.

Many historians are convinced that Vikings didn’t actually wear the iconic horned helmets. In fact, so few Viking-era helmets have been discovered that it’s possible the fearsome Norse warriors didn’t wear helmets at all.

So what did these warriors wear into battle? And how did the myth of the Viking helmet with horns get started in the first place?

What We Know About The Viking Helmet 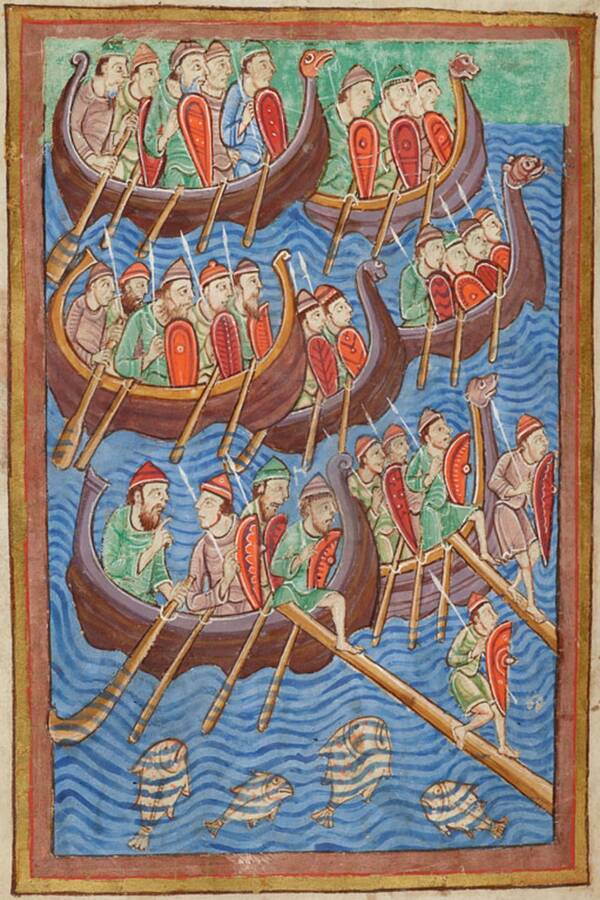 Public DomainA twelfth-century depiction of Nordic warriors invading England. Notably, they do not have horned helmets.

The Viking era lasted from about 800 until around 1050 C.E. Then, disparate groups of Nordic warriors started attacking cities and towns in Europe. Stories quickly spread of their violence, their lack of “civilization,” and their flagrant disregard for Christianity.

Accounts of the first recorded Viking attack in 793, for example, describe how a monastery in Lindisfarne was “spattered with the blood of the priests of God [and] despoiled of all its ornaments,” and how the Vikings “trampled on the bodies of saints in the temple of God, like dung in the street.”

Clearly, the invaders were something to be feared — but did they wear horned Viking helmets?

Sometimes. In contemporaneous depictions, Vikings often are depicted as wearing simple round headgear. But other times they’re shown as bareheaded — and not wearing a helmet at all.

In fact, hardly any Viking helmets — horned or otherwise — have ever been found. Though parts of them have been discovered in places like Denmark, archaeologists have found just one preserved such helmet. 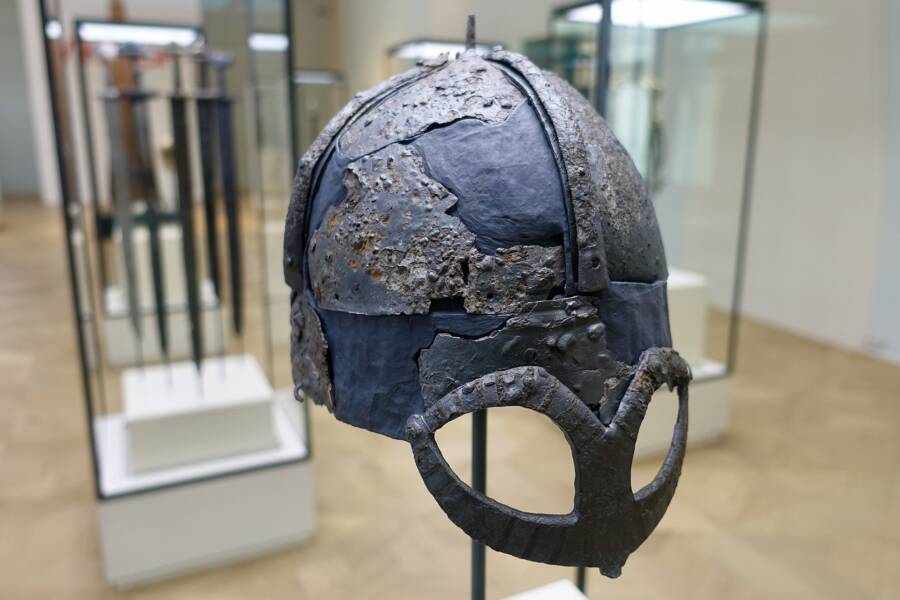 This helmet was discovered in 1943, in Gjermundbu, Norway, in a warrior’s grave alongside a full set of chain mail. But why has only one been found?

It’s possible that Vikings simply didn’t use helmets that often. Or, it could be that Viking warriors weren’t buried with their helmets. In any case, there’s no great surplus of Viking helmets in Europe. And archaeologists have never found a horned helmet from the Viking age.

So, how did Vikings get the reputation that they wore horned helmets into battle?

How Did The Horned Viking Helmet Myth Start?

The myth that Vikings had horned helmets comes from a surprising place — the opera. In 1876, costume designer Carl Emil Doepler sketched out designs for a performance of Richard Wagner’s Der Ring des Nibelungen. Doepler gave Vikings’ helmets horns and the rest is history. But why? 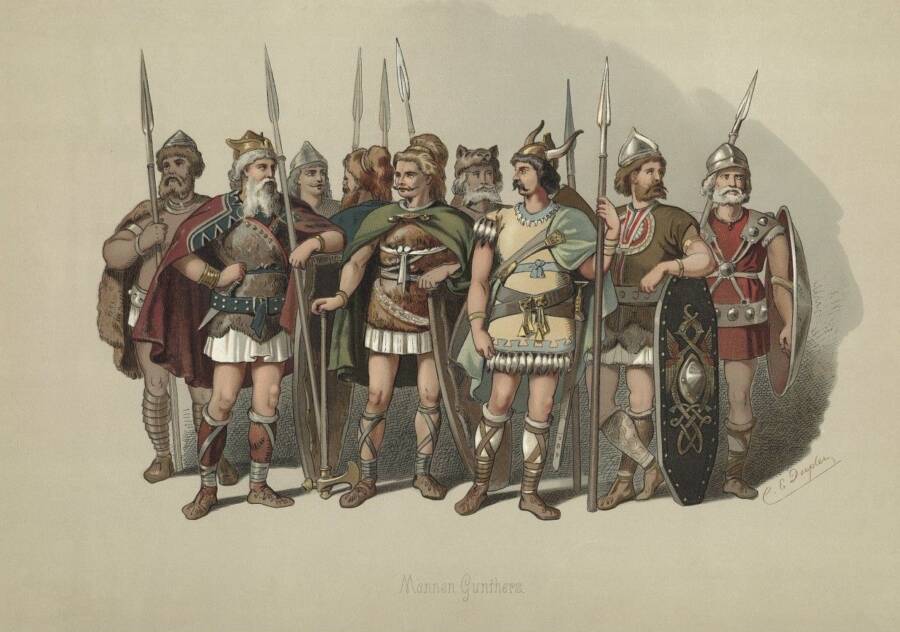 Doepler wasn’t simply struck with the inspiration of horned Viking helmets. He actually tapped into an ongoing German fascination with the Vikings. Thus, he decided to incorporate ancient German traditions, like elaborate headdresses, into his Viking depictions.

“The horned Viking helmet was just one of countless colorful items in the armoury of a fin-de-siecle Europe fascinated by war and its tools,” explained Roberta Frank in her paper The Invention of the Viking Horned Helmet.

Indeed, although Vikings didn’t use horned helmets, they had existed in ancient Europe. In the 1860s, a Celtic horned helmet dating from between 150 and 50 B.C.E. was found in London. And in 1942, workers in Denmark came across two impressive horned helmets that date back to 900 B.C.E.

Both these finds predated the Vikings by hundreds and hundreds of years. 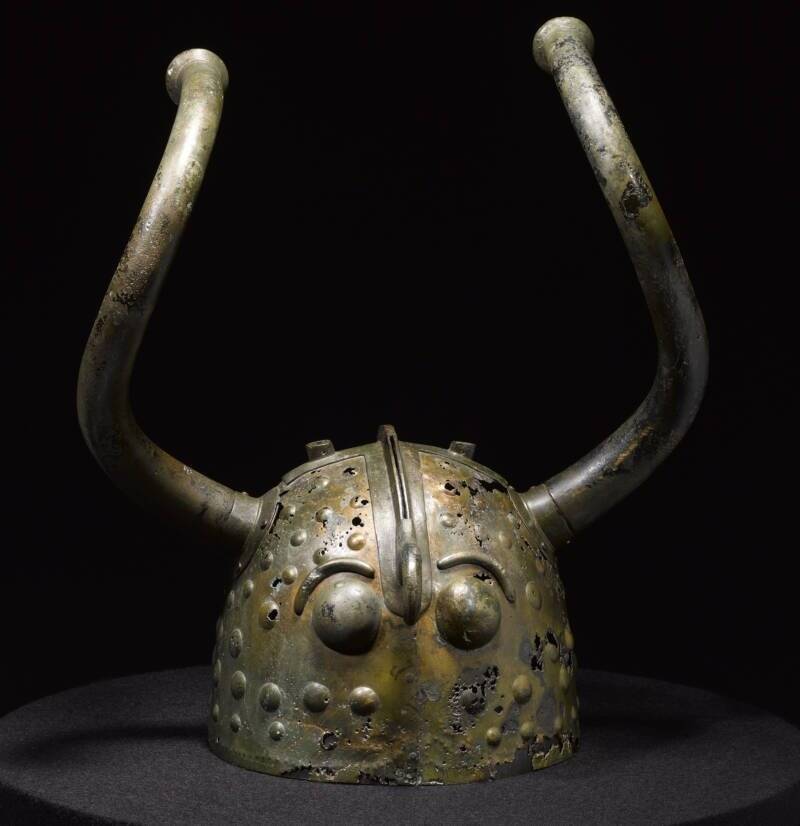 National Museum of DenmarkOne of the pre-Viking horned helmets found in Denmark.

That said, horned helmet imagery does sometimes appear in Viking lore. In 1904, archaeologists discovered a Viking-era ship in Oseberg, Norway. The ship dated to 834 B.C.E. — prime Viking age — and contained a number of artifacts, including a tapestry.

Curiously, that tapestry seemed to depict people wearing horns on their head. But archaeologists and historians are quick to point out that that doesn’t necessarily mean that the Vikings wore such gear into battle.

“Does this prove that all Vikings wore the famous helmets with horns? The answer is probably not,” noted the National Museum of Denmark.

It’s more likely that the tapestries depicted some kind of religious ceremony and that the horned helmets signify a Norse god like Odin. 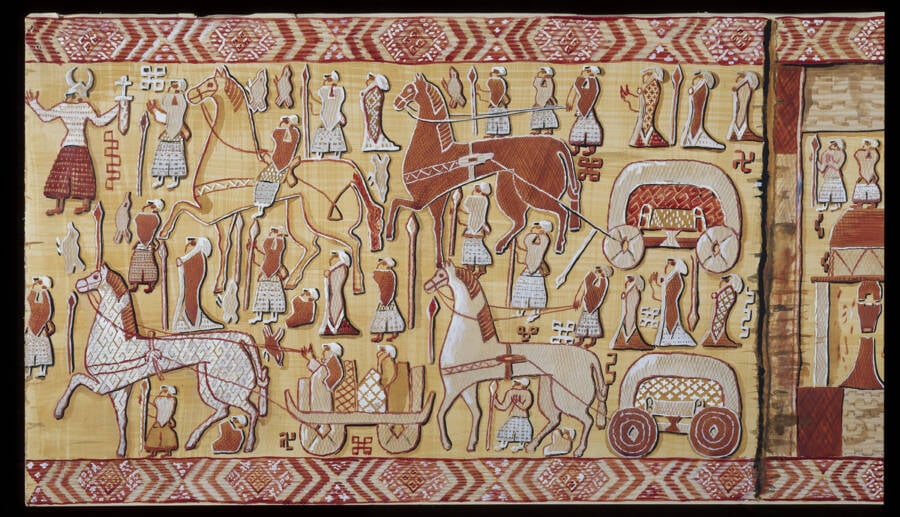 Museum of Cultural History, OsloThe horned figures in the Oseberg tapestry (this is a watercolor reproduction) may be Norse gods like Odin.

Other depictions of horned headgear in Nordic history predate the Vikings. Depictions of the Berserkers, for example — fearsome warriors known for taking drugs and fighting nude — date back to 400 B.C.E. The famous “Golden Horn” artifact seems to depict warriors like these.

Ultimately, it seems unlikely that Vikings from 800 to 1050 C.E. actually wore horns on their heads during battle. But they might have adorned themselves with horns for other purposes.

It’s “possible that such headgear was worn for display or for cultic purposes,” the National Museum of Denmark noted.

But “in a battle situation, horns on a helmet would get in the way. Such helmets would also have caused problems on board the warships, where space was already at a premium.”

In other words, these horns might be frightening to behold. But they wouldn’t be much help in combat.

Yet despite all the evidence to the contrary, the myth about the Norse warriors’ helmets has taken on a life of its own. Today, it’s hard to imagine these warriors without their iconic armor.

The Viking Helmet In Modern Times 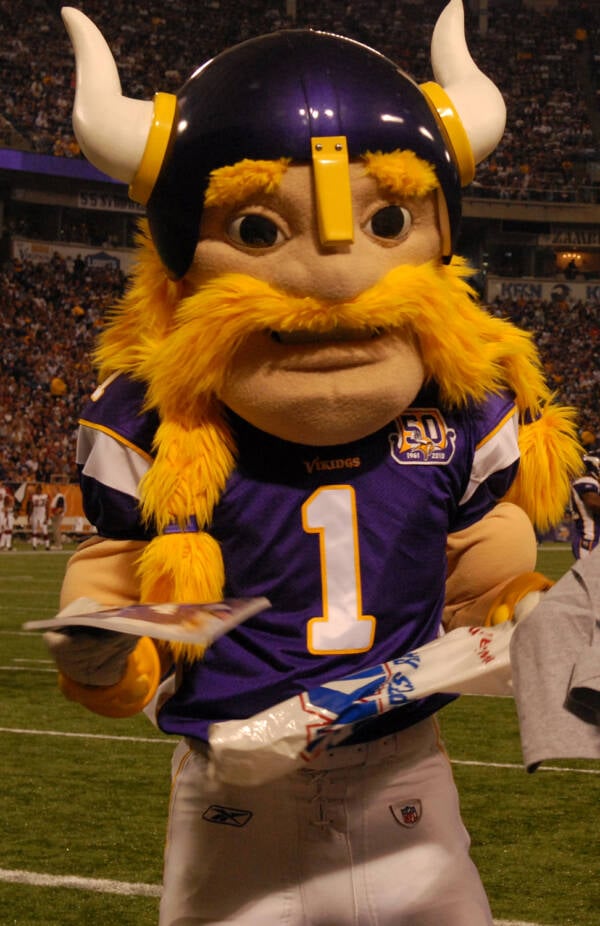 The idea of Vikings wearing elaborate headgear has endured since Doepler first suggested it. Popular comics like Asterix and Obelisk and Hägar the Horrible depicted Vikings this way. Even the American football team the Minnesota Vikings proudly display horns on their mascot.

Yet depictions like these are inaccurate — or at least an oversimplification. There’s no evidence that Vikings actually wore horns on their heads into battle.

And if Vikings did wear horned helmets, then it seems most likely that they did so for religious reasons. That’s what the Oseberg tapestry seems to suggest — that Odin, a god, would have horns.

Ultimately, plenty of mysteries remain about the Vikings. In some ways, they’re just as bewildering and fascinating to people today as they were to the terrified Europeans they attacked hundreds of years ago.

But one thing seems for sure. Vikings may have pillaged, they may have discovered North America, they may have even given women substantial rights — but they probably didn’t wear horns on their heads.

After reading about the fact and fiction of Viking helmets, discover the story of Viking shieldmaidens, the alleged female Viking warriors. Or, see how Erik the Red discovered Greenland after being charged for murder.