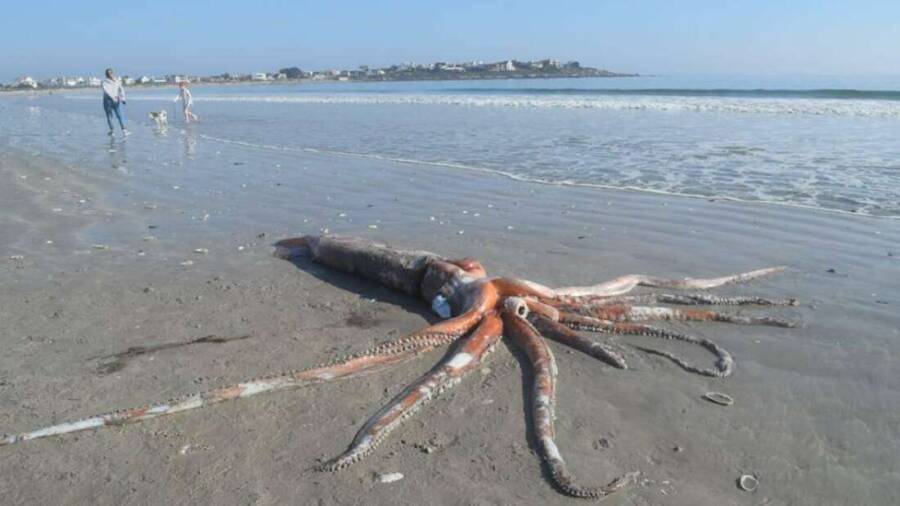 Iziko Museums of South AfricaThis giant squid found recently clocked in at 14 feet long — and it hadn’t even reached maturity yet.

The creature was caught on camera by local man Richard Davies who said the squid was still breathing when he found it. Davies initially tried to move the specimen back into the water but failed — as it weighed between 440 and 660 pounds.

According to IFL Science, this is one of the very few recorded sightings of this elusive cephalopod. Giant squid weren’t seen alive in their natural habitat until 2004.

It’s currently believed that this car-sized squid hadn’t even reached adulthood yet.

Footage of the giant squid courtesy of News24.

“It was sad because I could see it was dying,” Davies told News24. “It was still pumping out ink and I touched one of its tentacles which sucked onto my hand and I actually had to use some force to remove it.”

A Closer Look At The Giant Squid Found In Britannia Bay

This giant squid was eventually retrieved by marine biologists from the Iziko Museums for further study and is now part of the museum’s natural science collection, among 19 other giant squids that are submerged in 70 percent ethanol in large stainless steel tanks. 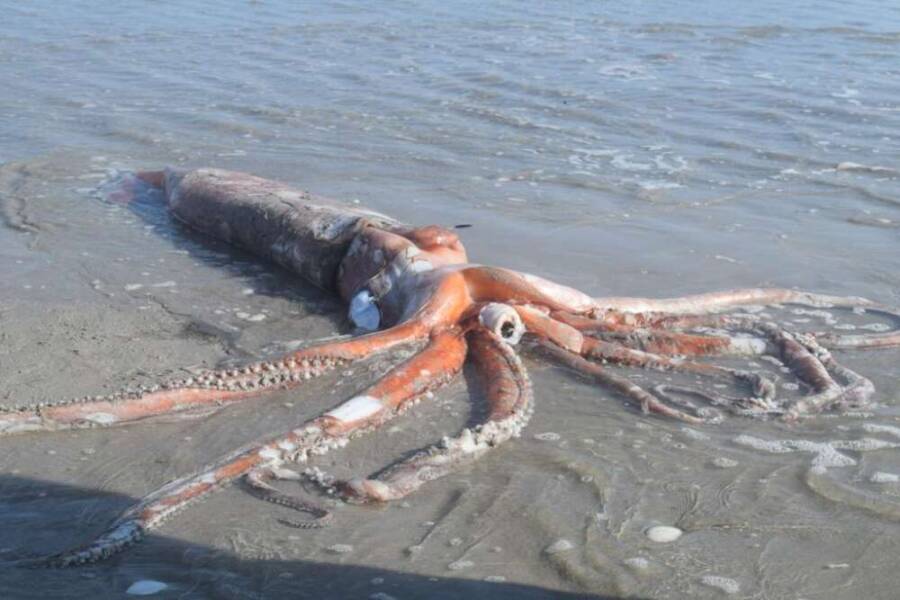 Adéle Grosse/Iziko Museums of South AfricaThe giant squid found 100 miles north of Cape Town is believed to be a teenager that weighed between 440 and 660 pounds.

Dr. Wayne Florence, who works as curator of marine invertebrates at the museum, said these animals live in all oceans except near the poles — and typically at around 985 to 3,280 feet deep. He also said the largest squid ever found in South Africa was beached in 1992 and measured 30 feet.

“It’s rare,” he said of these sightings. “In South Africa, we have had less than a handful of standings. Surprisingly, despite our museum being almost 200 years old, our earliest stranded giant squid specimen is from 1972.” 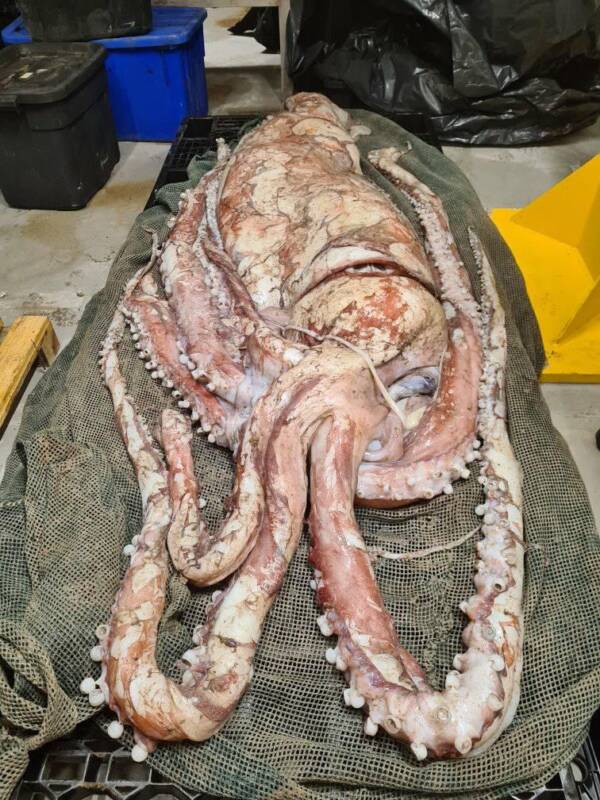 Dr. Wayne Florence/Iziko Museums of South AfricaFemales can reach up to 60 feet long.

The creatures are so elusive, in fact, that some beachgoers who saw this most recent squid didn’t even know what it was. Davies himself admitted that he had to Google the creature and then learned that he’d had a “once-in-a-lifetime sighting.”

Though he did his best to roll the young giant back into the ocean, he left it to “die in dignity.”

“Unlike most large animals, squid generally grow very quickly and only live for about five years,” said Dr. Florence. “They have annual rings but these have to be dissected and also analysis of the beak can give an indication of age.”

These creatures usually live to be about five on average. 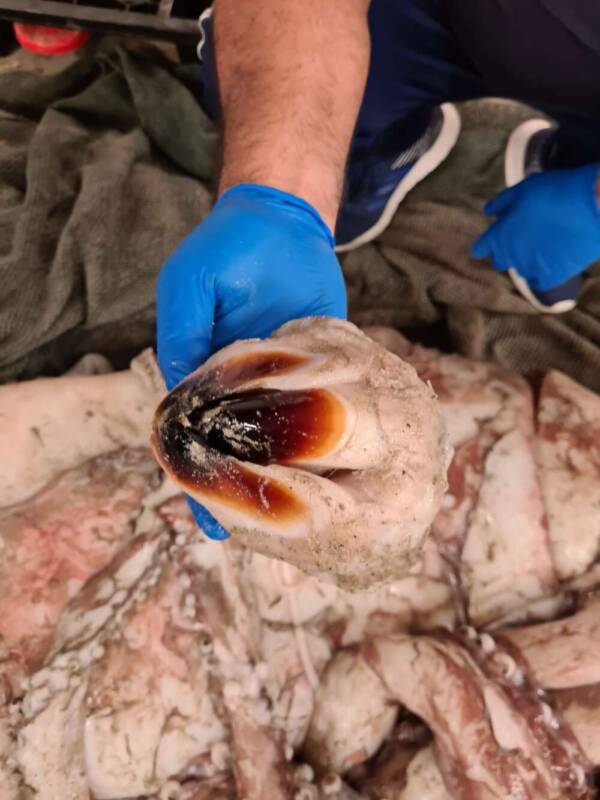 “Since this giant squid is just over [14 feet] in total length, based on expert opinion of other larger specimens, this beast was probably less than two years old.”

What Little We Know Of The Giant Squid 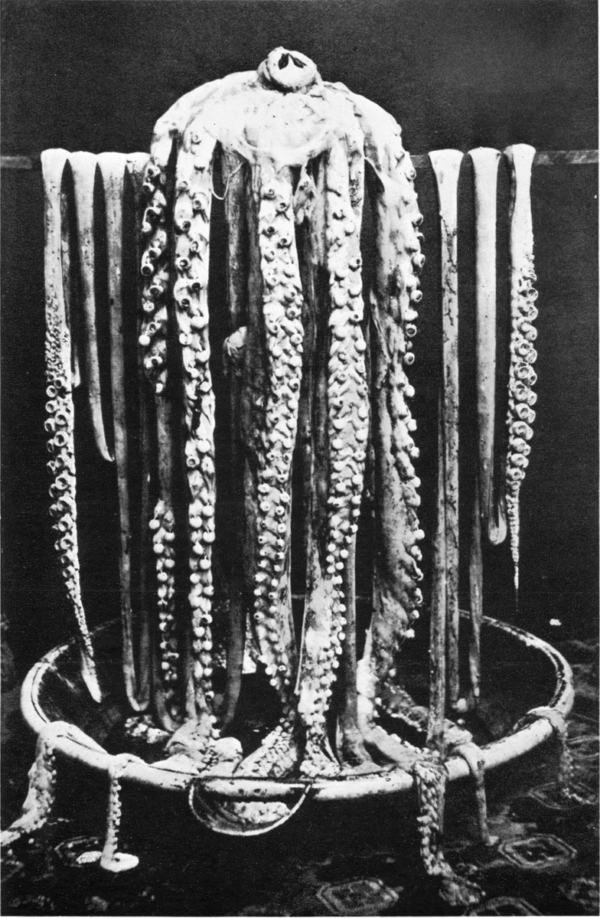 It’s no surprise that Dr. Florence and his colleagues are so fascinated by the giant squid found in Britannia Bay last week. For centuries, the species was considered to be the stuff of myth and was often dismissed as the legendary Kraken of Nordic folktales.

But given the creature’s size and rarity, it’s easy to understand why that it is. For one thing, a giant squid’s eyes can be as big as dinner plates.

The giant squid’s existence has only been scientifically accepted for about 150 years, following an 1848 sighting off the African coast of the island of St. Helena and several subsequent sightings of the animal either dead or alive. 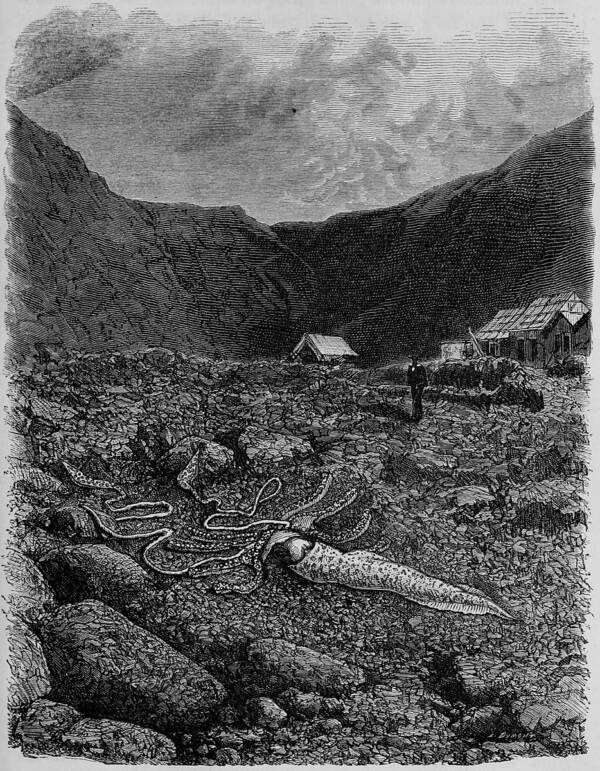 Nonetheless, a giant squid had never been photographed alive until 2002. The first time the species was even captured on film in its natural habitat was 2013.

Naturally, we are still learning about this singular species. Only earlier this year was the full genome of the giant squid sequenced for the first time — which revealed that they are remarkably intelligent. 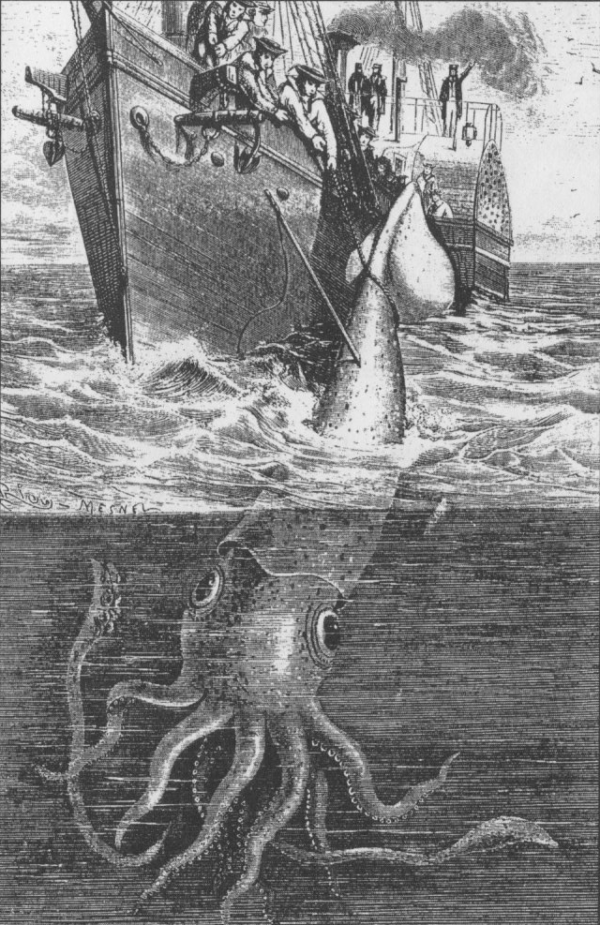 As for the giant squid found in Brittania Bay, experts are grateful for its near-perfect condition so that it can be properly studied. As it stands, Dr. Florence and his colleagues have taken tissue samples for DNA analysis.

In the end, this giant squid will be preserved as further proof that its elusive species is more than mere myth.

After learning about the giant squid found in South Aftica, read about the 14-foot giant squid that washed ashore on a New Zealand beach. Then, check out this giant squid egg sac that divers found in Norway’s deep sea.