A Brief History Of The Amphicar: The Amphibious Automobile Of Your Dreams

Originally designed as a Nazi war vessel, the Amphicar 770 made a splash as the only amphibious car ever mass-produced. 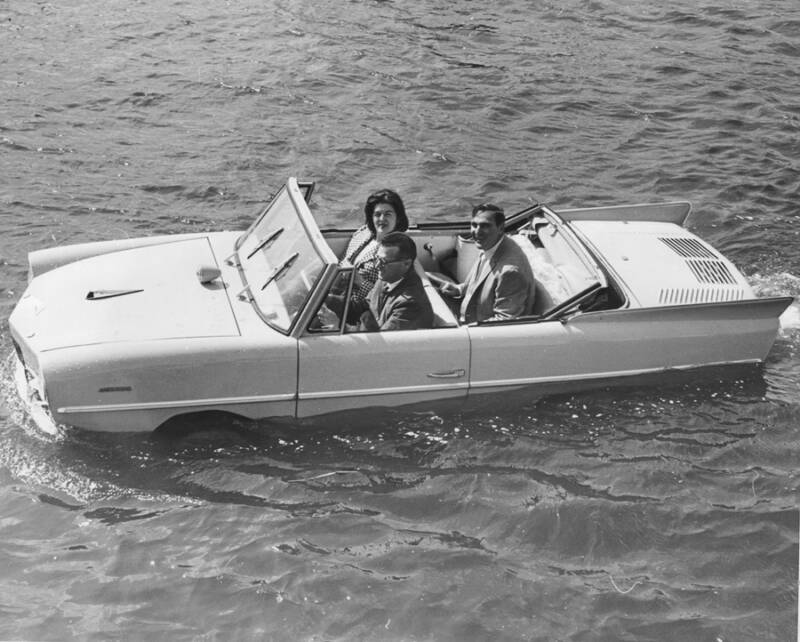 Jim Nightingale/Newsday RM via Getty ImagesA reporter test drives an Amphicar in the water with Al Bodkin, the general sales manager for Amphicar Corp. in the back.

The Amphicar was a short-lived amphibious car manufactured in West Germany during the 1960s. Originally devised as a military vessel for Nazi operations during the war, it went on to become a fad among car drivers in the U.S.

In fact, President Lyndon B. Johnson, who owned an Amphicar, notoriously loved shocking unsuspecting guests by driving them into the lake on his Texas ranch.

Here’s a look back through the amphibious car’s brief but wild history.

Creation Of The Amphibious Car 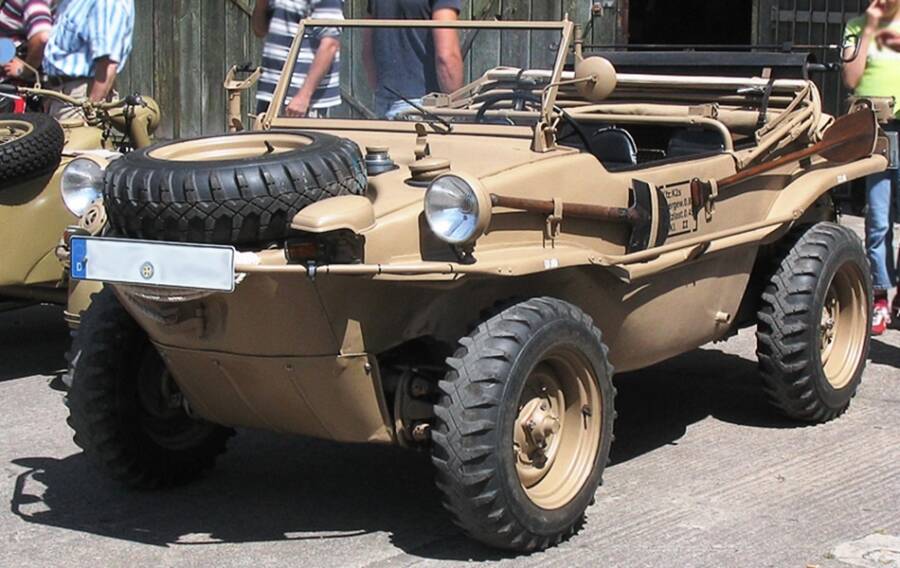 The Amphibious car — also known as the Amphicar — was a convertible that could operate on roads and in water. Although commercial production of the car only began in 1961 in West Germany, the history of the amphibious car’s original design can be traced back to World War II.

The design for the Amphicar came from its predecessor the Volkswagen Schwimmwagen. That amphibious military vehicle was designed by engineer Hans Trippel, a member of the Sturmabteilung paramilitary branch under the Nazis.

According to The Respectable Career of Fritz K.: The Making and Remaking of a Provincial Nazi Leader by German historians Hartmut Berghof and Cornelia Rauh, around 200 Volkswagen Schwimmwagens were produced during the war. However, it never went into industrial production due to skepticism over the vehicle’s durability.

A Pepsi commercial featuring an Amphicar driving in the water.

After serving only two years in prison following the ruling of “denazification” courts in Germany after the war, Trippel jumped back into manufacturing and continued to pursue his dream of perfecting his amphibious car design.

In 1961, the first Amphicars were manufactured under the Quandt Group, an industrial empire run by the stepson of Joseph Goebbels. The Quandt Group still owns stakes in the luxury car brand BMW to this day. 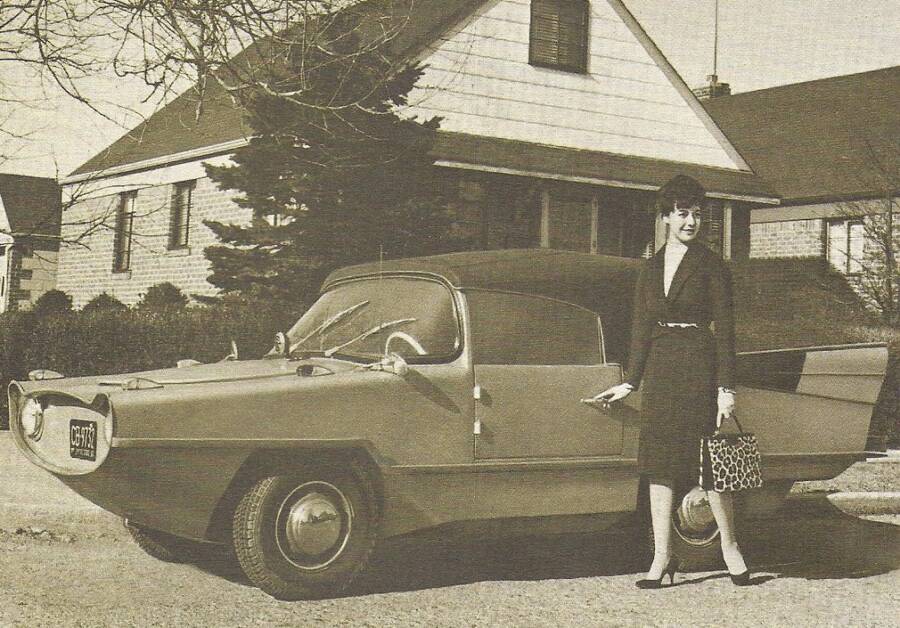 The first commercial design of Tippel’s amphibious car was the Amphicar 770 model, which could reach 70 mph on land and 7 mph in the water. The two-door, four-seater convertible had a flashy exterior fitting the 1960s aesthetic. The car’s body was manufactured in the city of Lübeck while the final assembly was done at the Deutsche Waggon und Maschinenfabrik (DWM) factory in Berlin.

The amphibious car had a 15.5-foot long body and weighed around 1,738 pounds. To drive it from the streets and into the water, its steel unibody had double seals on the doors that could be activated by pulling a lever, preventing the amphibious car from taking on water.

The car’s production officially ran until 1965, but more Amphicars were made from remaining parts until 1968. All told, the Quandt Group produced 3,878 amphibious cars. Although its numbers might be modest, the Amphicar remains the only civilian amphibious passenger automobile ever to be mass-produced to date.

Did People Actually Buy The Amphicar? 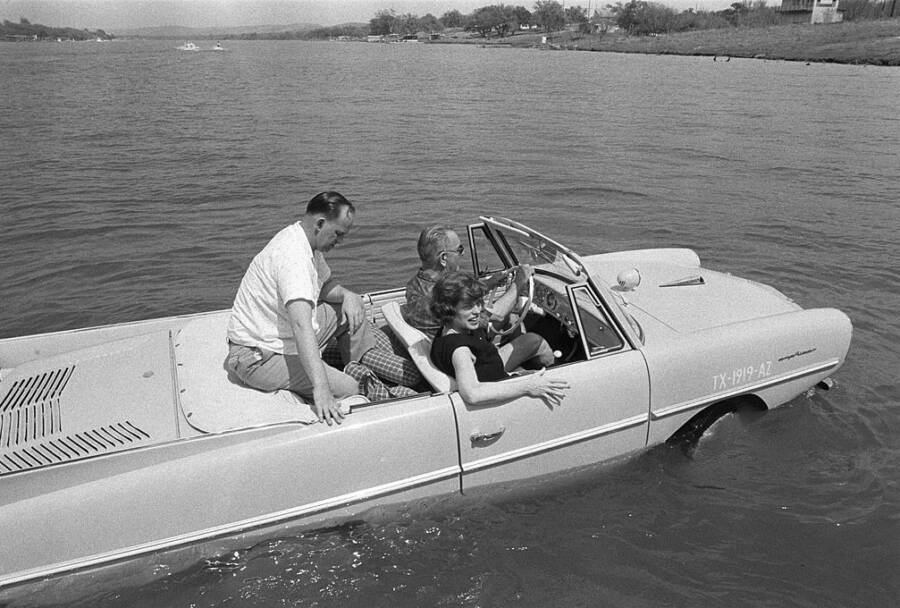 Wikimedia CommonsPresident Lydon B. Johnson (pictured) famously enjoyed driving his Amphicar into the water as a practical joke on unsuspecting guests.

For some reason, the amphibious car enjoyed quite a bit of success in the U.S. Roughly 90 percent of its global sales originated from the American market.

Dealers and industry insiders heralded it as a unique innovation in the commercial automobile sphere. Modern Mechanix declared “It does everything but fly!” while publications like the New Yorker and NewsDay published features describing the reporters’ experiences test-driving the Amphicar on the riverway.

Interest in the Amphicar was high enough to spawn a company, Amphicar America. The company leased office space in Manhattan and a headquarters in New Jersey, as announced in the real estate section of the August 17, 1962, edition of the New York Times.

Today there are roughly 600 Amphicars that still exist in the U.S.

The most famous Amphicar owner was none other than then-President Lyndon B. Johnson who used his hybrid car to play practical jokes on guests.

As journalist Robert Sempler divulged in a 1965 profile of the president:

“The scenario is familiar now. Unsuspecting guest is lured into Amphicar. President says they’re going for a little spin. President heads for water. Guest cries, ‘Hey, you’re going into the water!’ President flips a lever that locks doors, prevents leakage. Car hits water with a whoosh. Guest gasps, then realizes he isn’t sinking. Color returns to face, and he and President go putt-putting along at about 5 knots.” 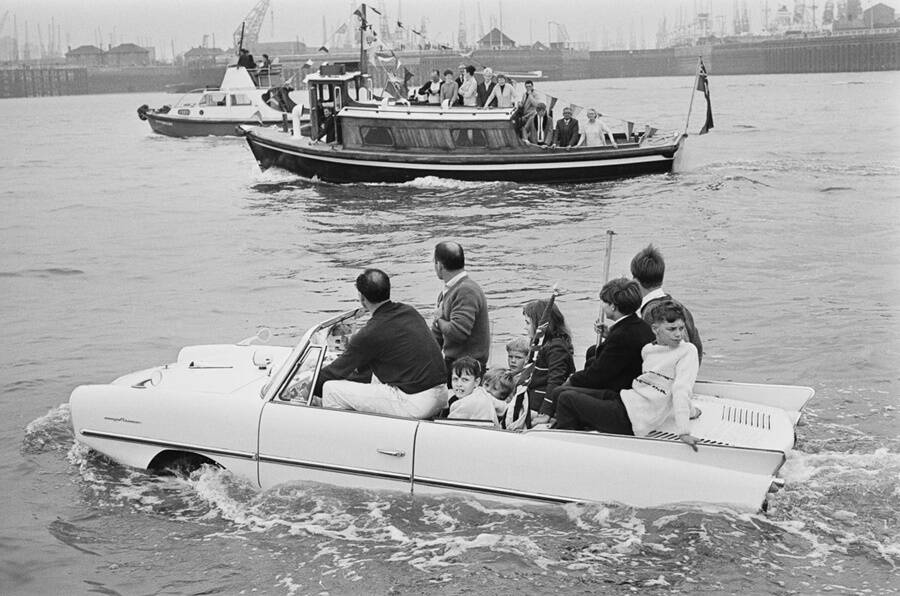 President Johnson’s pranks using his amphibious car were so well known that they were even included in the HBO film All The Way starring Bryan Cranston as the president. But the Amphicar wasn’t just used for presidential pranks.

According to enthusiast website Amphicar.com, the amphibious car was also marketed as a specialty vehicle for emergency rescue services. The Red Cross deployed a number of Amphicars to serve flood danger areas. But as the decade came to a close, the novelty of the boat-car hybrid vessel began to wear off.

The End Of The Amphicar 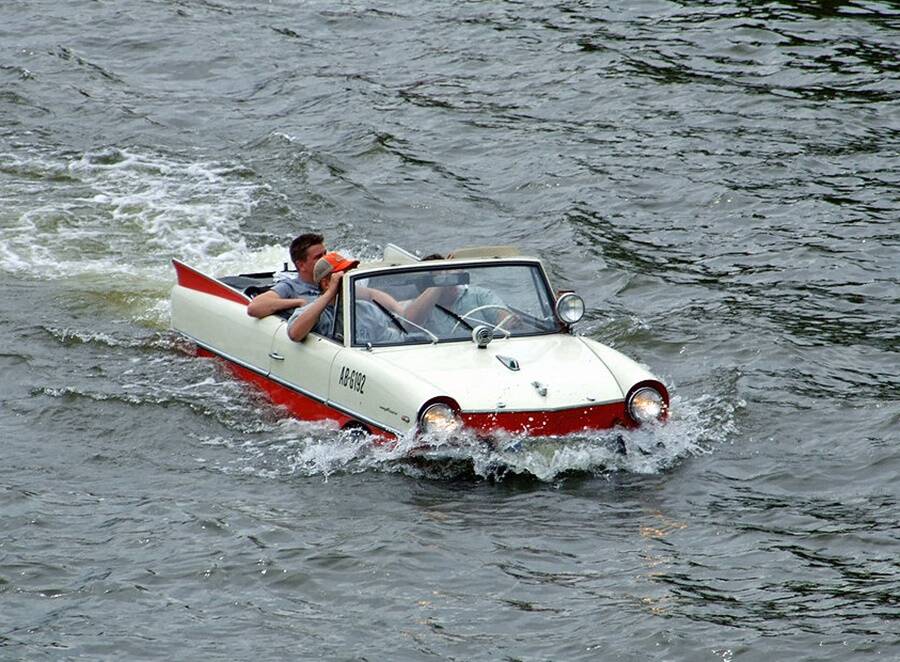 The amphibious car enjoyed a brief moment in the spotlight but it never became mainstream among drivers. According to Gothamist, the failure of the Amphicar was brought on by several contributing factors.

First, the infrastructure needed to support the amphibious car’s unique capabilities simply didn’t exist. In order for the driver of an Amphicar to launch their vehicle into the water, there needed to be sufficient space, like a proper ramp. These kinds of setups were limited.

Then, there was the amphibious car’s confusing identity. While the water-riding vehicle enjoyed some degree of attention due to its dual function, the marketing for it was unclear. Was it a car or was it actually a boat? This muddled messaging may have cost Amphicar potential customers. 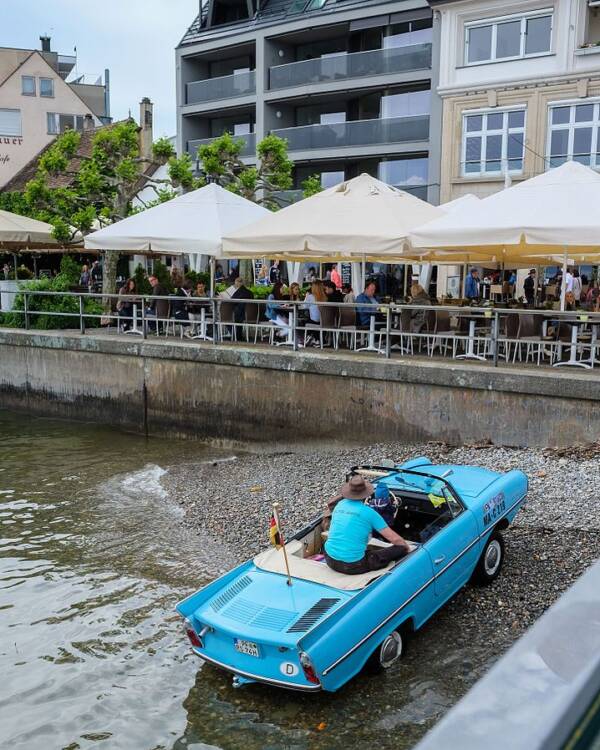 Amphicar docked on the shore of Lake Constance in Baden-Württemberg, Germany.

Though compact, the Amphicar was also a high-maintenance automobile. After five hours in the water, the engine needed to be greased — which could only be done by lifting the entire car and taking out the rear seats. Exposure to saltwater made it vulnerable to erosion, so it needed to be frequently cleaned thoroughly with fresh water.

Production of the amphibious car officially ceased in 1965 but Amphicars made from remaining parts continued to be sold over the next few years. In 1968, when the last Amphicar sold, the U.S. government’s newly formed Environmental Protection Agency (EPA) put out standards for vehicle emissions and safety regulations.

Amphicar was unable to meet the new regulations so the 1968 model couldn’t be sold in the States. This devastated sales since the majority of purchases came from the U.S. The remaining inventory of unused parts was bought out by a manufacturing company in California, the only place where Amphicar owners can find spare parts today.

But that was not the end of the car that can turn into a boat. They still exist as prized acquisitions of car collectors. Some 600 Amphicars can still be found in the U.S. 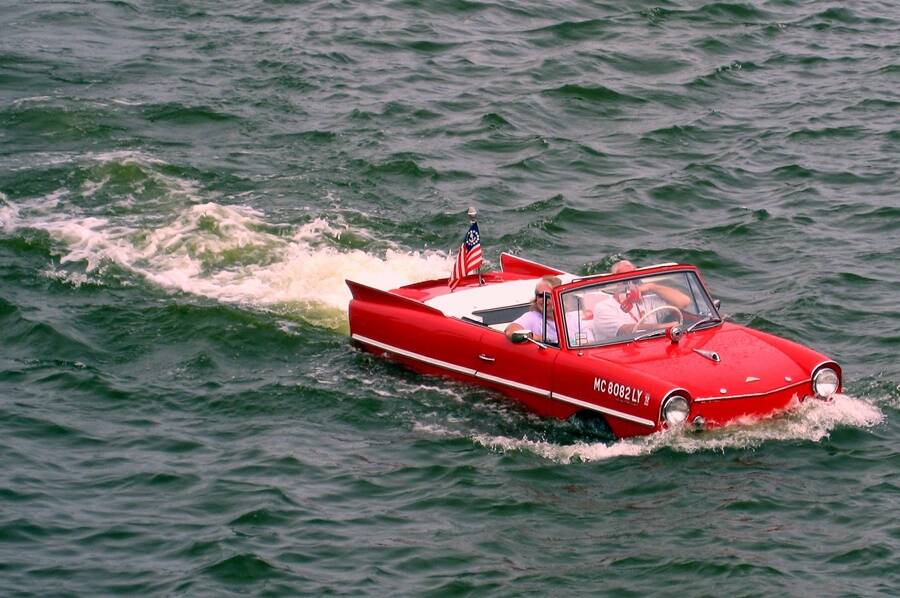 FlickrOwners of rare Amphicars hold “swim-in” meet ups with other amphibious drivers during the summer.

“1968 was the last year the car was made and is the only year with a locking steering wheel,” said Tom Gilbertsen of Orange Park Acres, who owns a rare 1968 Amphicar in his car collection. “Amphicars weren’t imported into the U.S. in ’68, but someone shipped mine here on their own.”

Modern-day amphibious car owners can join the International Amphicar Owners Club which hosts “swim-in” meet up events annually in different cities during the summer. The largest one in the U.S. is typically held in Ohio.

There have been new iterations on the original Amphicar by car manufacturers around the world. In 1996, British automaker Lotus carried out an engineering viability study for an amphibious car with the help of Neil Jenkins, who built the Jaguar XJ220, to construct a frame and body design.

The “duckboat” tourist vehicles seen in seaside cities across the country also descend from the Amphicar. Unfortunately, the growing number of accidents involving these hybrid tourism vehicles, which typically carry upwards of 30 passengers at once, has made their continued use controversial.

Though it’s over 50 years now since the last Amphicar was made, these unique vehicles continue to charm collectors. Perhaps this quirky car that turns into a boat could still inspire an amphibious vehicle revolution in the future.

Now that you’ve brushed up on the little known history behind the amphibious car, read how Carroll Shelby built America’s most iconic muscle car and became a racing legend. Next, take a look at 25 totally weird cars from around the world.