The History Of The Gold Digger 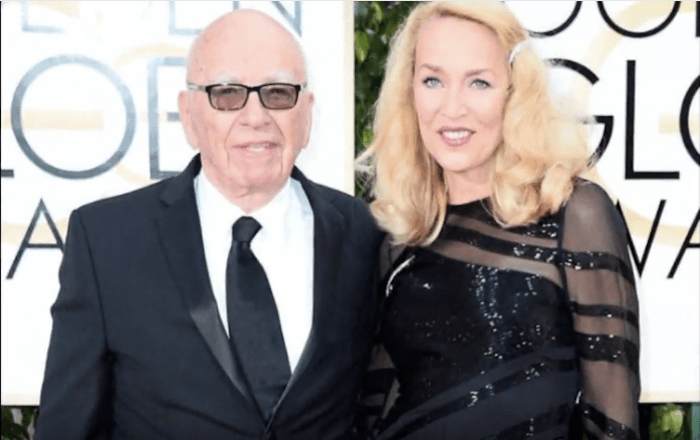 Rupert Murdoch and Jerry Hall’s engagement has led to some accusations of Hall being a gold digger. Image Source: YouTube

When news broke that conservative media mogul Rupert Murdoch became engaged to former model Jerry Hall, the term “gold digger” was quickly thrown around. Murdoch, 84, is worth a staggering $11.3 billion dollars. Jerry Hall, 59, isn’t exactly living paycheck-to-paycheck—she has a net worth of around $15 million—but she still couldn’t get away from claims that she’s trying to marry for money.

While not such a stunningly obvious “beauty and the beast” relationship as Anna Nicole Smith and oil tycoon J. Howard Marshall, Murdoch isn’t exactly a dead ringer for the type of guys Hall usually likes to be with. Hall’s longest relationship was with Rolling Stones front-man Mick Jagger—the two stayed together for 22 years and had four kids, but money was a contentious issue when they split in 1999. Hall originally demanded half of Jagger’s $300 million, but settled for $10 million, the majority of her wealth today.

Murdoch, on the other hand, has burned through four marriages already. His first was in 1956 (the same year that Hall was born) and each successive marriage has ended in a flurry of accusations that the woman was only there for the money.

Nevertheless, Murdoch has found himself getting back into relationships with younger women just days and months after the previous relationship ended. His penchant for quick marriages continues with Hall—the newly engaged couple was introduced just four months before getting engaged in Los Angeles during the Golden Globes.

It’s entirely possible that Hall really is in love with a generally reviled, ruthless man who is 25 years her senior and who just happens to be the 89th richest person in the world, of course, but that won’t stop the gold digger accusations. It’s not surprising—Hall is hardly the first woman to be accused of using a relationship as a shovel to dig out a chunk of a man’s bank account.

The history behind the “gold digger”

Kanye West may have popularized the term in recent years, but it’s been around a lot longer than that. Barry Popik, the man behind the popular etymology website The Big Apple, found the derogatory term was first used all the way back in 1911.

“These people are money mad, aren’t they? Worst bunch of gold-diggers I ever saw,” Rex Beach wrote in his 1911 novel The Ne’er-Do-Well.

It wasn’t until four years later that the term was used specifically to refer to a woman who marries a man for his money. Virginia Brooks’ 1915 novel My Battles With Vice refers to a woman who is the queen of attaching herself to men for their money: “She can get money from a ‘Gypshun’ mummy, believe me.”

Every successive use of the term parses the usage down further to simply meaning a woman bedding a rich man for his money. Back in 1918, Munsey’s Magazine used it in a way that would look all too familiar in today’s tabloids: “I got a wife somewhere—that blonde that used to sing in Faro Jim’s place in Dawson. I don’t know where she is, but I guess she’s still alive, and I ain’t going to give her a chance to get bigamy on me. She’s a gold-digger, that one. If she got anything like that on me, she’d wring me dry as a bone!”

The term broke into the mainstream with a hit play and movie—The Gold Diggers in 1919 and Gold Diggers of Broadway in 1929, respectively. The rest is history.

The Random House Historical Dictionary of American Slang specifically describes a gold digger as “a woman who associates with or marries a man solely for his wealth.” But why is this? It may have made sense a century ago, but these days there are plenty of examples of men earning the term.

Take, for example, Kevin Federline. The backup dancer is best known for his marriage to Britney Spears, who was without doubt the money maker of the two. Federline and Spears shared a love of music, but his path to her heart seemed less than pure.

Federline split from his wife days after she gave birth to their second child and quickly hopped on the Britney bandwagon while she was at the height of her fame. They married three months later in a shotgun wedding and then divorced after two years. Federline is now receiving $20,000 a month for child support, which surely qualifies him for gold digger status.

As with the case of the aforementioned Anna Nicole Smith-J. Howard Marshall marriage, gold digger relationships don’t typically end well. When Marshall died, Smith was left out of the will and it appeared as though she had kissed Marshall’s aged skin for a whole year for nothing. She fought hard for years for a piece of his inheritance—much to the enjoyment of the celebrity news cycle.

The harsh criticism she received left its mark on Smith, and it ended tragically with a reliance on prescription drugs that led to her untimely death in 2007 at the age of 39.

History hasn’t generally been kind to the gold digger, so for Jerry Hall’s sake, let’s hope she’s in it for love.