One of Hollywood's most glamorous stars before she became Princess Grace of Monaco, Grace Kelly died the day after she crashed her car off a cliff near Monte Carlo in 1982.

Grace Kelly’s death came as a shock when the Prince’s Palace of Monaco announced it on September 14, 1982 — but not because it was altogether sudden. The day before, Kelly, the Princess of Monaco, had been in a car crash. Yet the palace had released a statement saying she was in stable condition with a few broken bones. 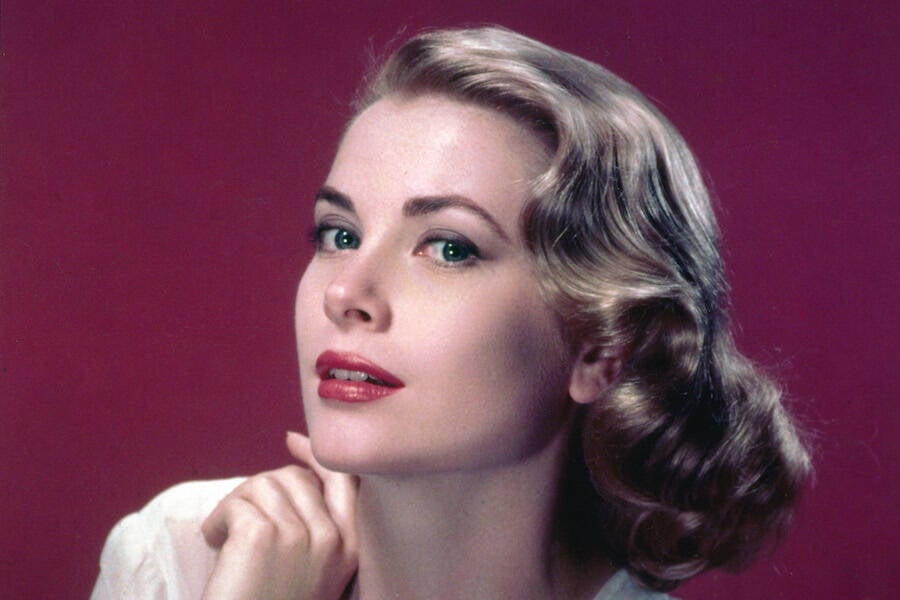 In reality, the former Hollywood star had been unconscious since she arrived at the hospital around 10:30 a.m. on Sept. 13, and doctors gave her zero chance of recovery. Almost immediately, salacious rumors swirled about her death and the circumstances that led to her fatal car crash. But the truth was far more prosaically tragic.

At just 52 years old, Princess Grace suffered a stroke-like attack while driving, lost control of her car with her 17-year-old daughter, Princess Stéphanie, in the passenger seat, and plunged down a 120-foot mountainside.

Stéphanie survived, but Grace Kelly died the following day when her husband, Prince Rainier III of Monaco, told doctors to take her off life support. She had been declared brain-dead after 24 hours in a coma.

The Short Road To Hollywood Stardom

Grace Patricia Kelly was born on November 12, 1929, to a prominent Irish Catholic family in Philadelphia. She longed to be an actor and moved to New York out of high school to pursue her dream. According to Vanity Fair, her career took off based on a screen test she completed in 1950 for a movie that she didn’t end up starring in called Taxi.

Two years later — and almost exactly 30 years before Grace Kelly’s death — director John Ford saw the test and cast her in his film Mogambo, where she starred alongside Clark Gable and Ava Gardner. The screen test also gained Alfred Hitchcock’s interest a year later, and he cast Kelly in the first of three films they did together. These films would be her most famous. 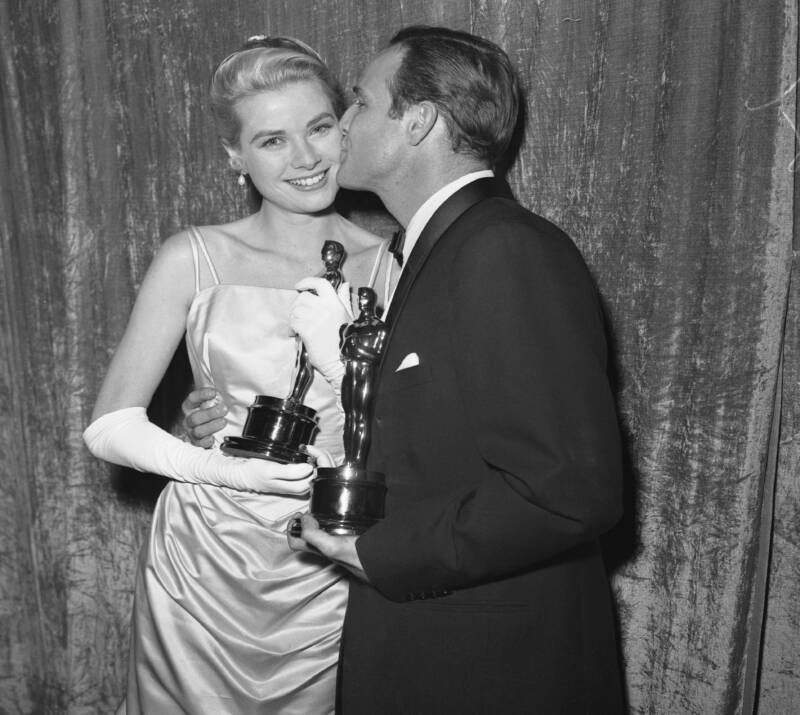 Bettmann/Getty ImagesMarlon Brando kisses Grace Kelly after she the 1954 Academy Award for Best Actress for her role in The Country Girl. Brando won Best Actor that same year for his role in On The Waterfront.

In 1954, Grace Kelly starred in Dial M for Murder with Ray Milland and Rear Window opposite James Stewart. The following year, she appeared with Cary Grant in To Catch a Thief. Hitchcock was fond of her as one of his heroines, saying she epitomized “sexual elegance.”

The gorgeous and talented actress also completed films opposite other giant stars of the day, including Gary Cooper and Louis Jourdan. But in 1955, Grace Kelly retired from acting because she became engaged to Prince Rainier III of Monaco. Kelly did get offers in the years following the wedding, but she only agreed to narrate documentaries.

While filming The Swan in Monaco in 1955, 25-year-old Grace Kelly met 31-year-old Prince Rainier III. The role even had her playing a princess when she met him. To the Hollywood press, it seemed that their union was meant to be.

To capitalize on and celebrate the union, Metro-Goldwyn-Mayer even released The Swan to coincide with their wedding day in April 1956. Her final film, High Society, premièred in July of that same year. 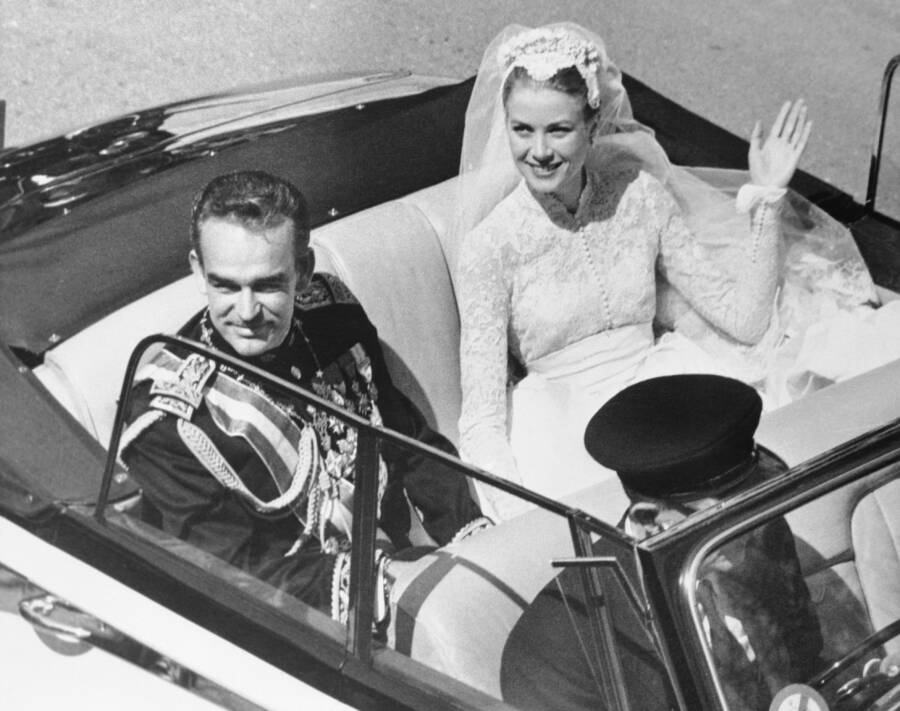 Bettmann/Getty ImagesPrince Rainier III and Princess Grace of Monaco return to the palace after their wedding on April 19, 1956.

Kelly almost returned to the screen in 1964 for another Hitchcock film entitled Marnie, but she ended up backing out, according to Vanity Fair. Despite her desire to return to the screen, Kelly’s obligations to the crown and her family were too much for her to do it all.

Rainier and Kelly had three children. The eldest, Princess Caroline, was conceived during their honeymoon. This pregnancy was essential in helping secure the Grimaldi family succession and continue Monaco’s independence from France. Prince Albert, the current head of state, was born in 1958. And then Princess Stéphanie, who was present in the car crash that led to Grace Kelly’s death, was born in 1965.

Grace Kelly died the day before her daughter, 17-year-old Princess Stéphanie, was due to start school in Paris. While driving Stéphanie from the family’s country home in Roc Agel, France, to catch a train to Paris from Monaco on Monday, Sept. 13, 1982, Kelly suffered a minor stroke-like attack, according to The New York Times.

The attack, characterized by doctors as a “cerebral vascular incident,” caused Kelly to briefly pass out before she lost control of the car and crashed through a barrier that separated the winding mountain road from the sheer cliff below. 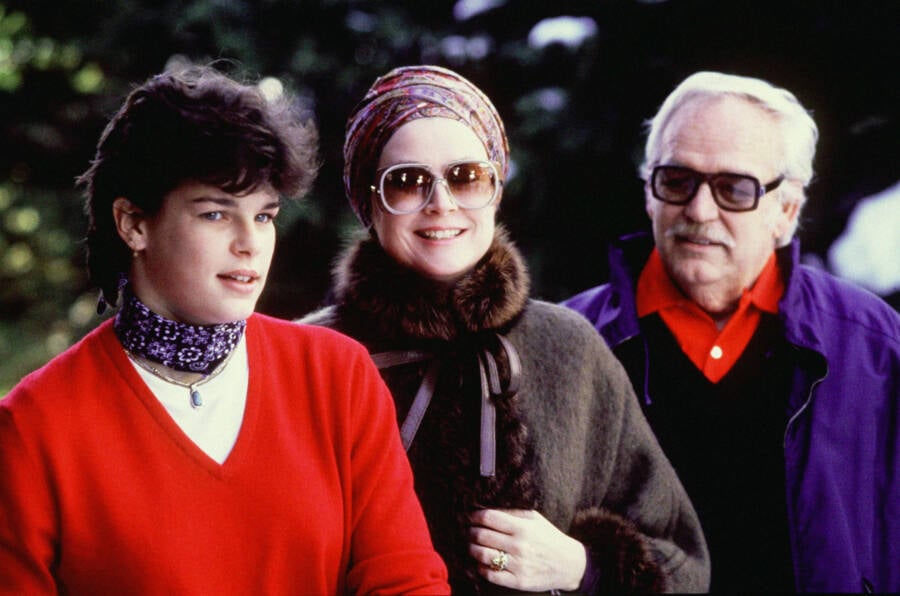 Michel Dufour/WireImage via Getty ImagesPrincess Stéphanie of Monaco (left) and her parents, Princess Grace and Prince Rainier III, in Switzerland in 1979. Stéphanie was in the car with Grace and later said she tried to pull the hand brake to no avail.

Stéphanie attempted to stop the car. She said, “The investigation said the automatic gearbox was in the park position. Because I was about to take my driving test, I knew you had to put it in park to stop the car. I tried everything; I even pulled on the handbrake. Did my mother confuse the brake pedal with the accelerator? I don’t know.”

It was too late. The car tumbled through the air, crashing into pine branches and rock before stopping in the garden of a house 120 feet below. Princess Stéphanie and Kelly, neither of whom were wearing seatbelts, were hurled about the cabin. Kelly ended up pinned in the back seat while Stéphanie was caught under the glove box.

After Grace Kelly’s death, many rumors came out about what could have been the cause, including that Kelly and Stéphanie had been arguing beforehand or that Stéphanie was actually driving, despite being underage without a license. The latter rumor was given credence by a gardener who said that he pulled her out of the driver’s side of the car afterward.

Stéphanie has since spoken out against this theory, saying, “I was not driving, that’s clear. In fact, I was thrown around inside the car like my mother… The passenger door was completely smashed in; I got out on the only accessible side, the driver’s.”

Stéphanie sustained a hairline fracture in her spine, and Kelly had suffered two strokes, according to The Washington Post. The first of Kelly’s strokes, doctors said, caused the accident, and the other happened shortly afterward. She was in a coma for 24 hours. But doctors declared her brain dead, and her husband, Prince Rainier III, made the heartbreaking decision to take her off life support on Sept. 14, 1982, ending her life.

Could Grace Kelly’s Death Have Been Prevented?

One question about Grace Kelly’s death is why she was the one driving at all. Stéphanie was too young to drive, and Kelly hated to drive. She preferred to use a chauffeur, especially around Monaco, after she was behind the wheel during a previous car crash in the 1970s.

According to Jeffrey Robinson’s Rainier and Grace: An Intimate Portrait excerpted in The Chicago Tribune, Kelly decided that it would have been impossible for her, Stéphanie, and the chauffeur to all fit into the car that day. 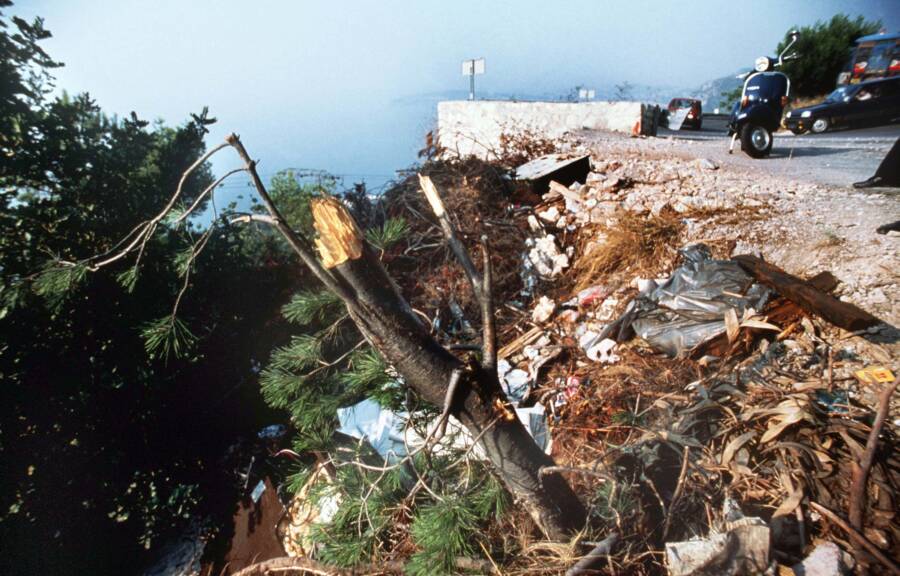 Istvan Bajzat/Picture Alliance via Getty ImagesThe hairpin turn in La Turbie, France, near the border with Monaco, where Grace Kelly’s car careened off the road after she lost control.

Because Stéphanie was leaving for school, she’d packed heavily. The trunk was full of luggage, and dresses and hat boxes covered the back seat. In the end, there simply wasn’t room for three people in the small 1971 Rover 3500, a favorite of Kelly’s despite her aversion to driving.

And although the chauffeur did offer to make a second trip for the clothes, Kelly insisted on driving herself. The fact that Kelly instead chose to drive on a dangerous road when she didn’t like to drive at all was uncharacteristic. To this day, not even Stéphanie has offered a theory as to why her mother made that choice.

There are a few other things about Grace Kelly’s death that didn’t — at least initially — line up with her suffering a cerebral attack, which helped spawn some conspiracy theories early on.

Why Rumors About Her Demise Persist

Before Grace Kelly’s death, the public didn’t know how serious her injuries were, with the Prince’s Palace of Monaco suggesting it was nothing more than broken bones. The full extent of her injuries wasn’t released until later, but no one seems to know why. Some wondered if it was because she didn’t get the best medical care, while others wondered whether a mechanical brake failure led to the crash. 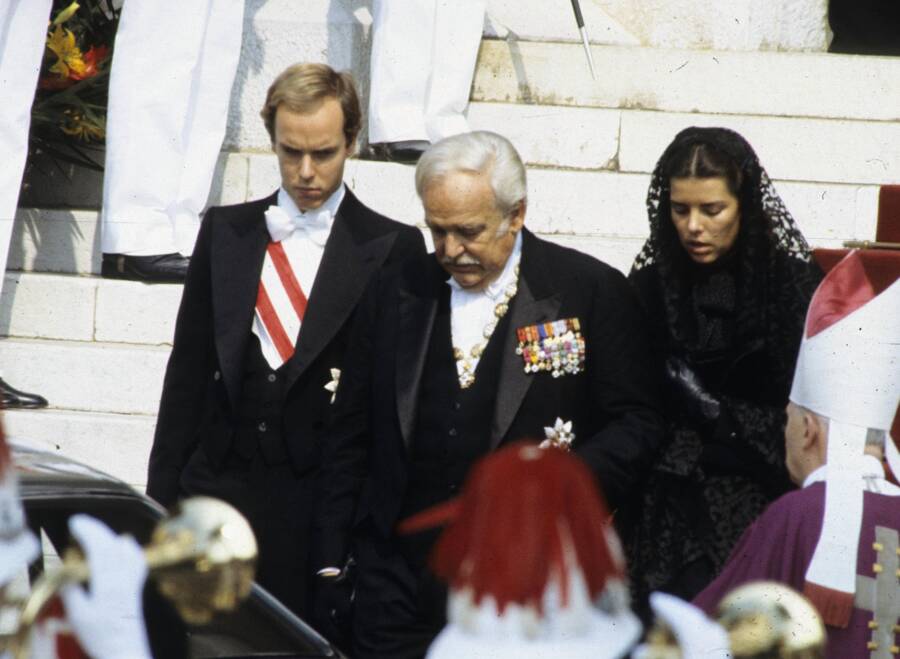 Michel Dufour/WireImage via Getty ImagesPrince Albert, Prince Rainier III, and Princess Caroline of Monaco at Grace Kelly’s funeral in Monte Carlo on September 18, 1982. Princess Stéphanie could not attend because she was still recovering from the injuries she sustained in the crash five days earlier.

In addition to the speculation that Stéphanie was driving, another rumor involves the Mafia putting a hit on her. Prince Rainier attempted to put conspiracy theories to rest by telling author Jeffrey Robinson, “I can’t for a moment see why the Mafia would want to kill her.”

Other possibilities hint at Kelly’s loss of control stemming from overpowering emotions and an argument with her daughter. That summer, they allegedly fought over Stéphanie wanting to marry her boyfriend. If they had had such an argument that day, Kelly might have gotten so upset that her driving may have become erratic. Stéphanie has denied that such an argument took place before the accident.

Moreover, doctors have stated that Kelly didn’t have high blood pressure, and since she wasn’t overweight, the reason for her to suffer from anything resembling a stroke is unknown.

Princess Grace of Monaco was interred on Sept. 18, 1982. Stéphanie was the only member of the family not in attendance at her funeral because she was still recovering from her injuries.

It is impossible to understand what happened when Grace Kelly died entirely. But according to the family, the endless tabloid speculation has only caused more heartache.

“They did their best to keep the story running and didn’t show much human compassion for the pain that we were suffering,” Prince Rainier said. “It was dreadful… it hurts all of us.”

After reading about Grace Kelly’s death in a tragic car crash, learn the real story of actress Jayne Mansfield’s notoriously grisly death on a Louisiana highway. Then, go inside the nine most famous deaths that shocked old Hollywood.