The Mystery Of The Grauballe Man, The Iron Age Body Preserved In A Peat Bog For 2,300 Years

When the Grauballe Man was discovered accidentally, his corpse was so well-preserved that it was initially believed he'd been dead for only 65 years — and not two millennia. 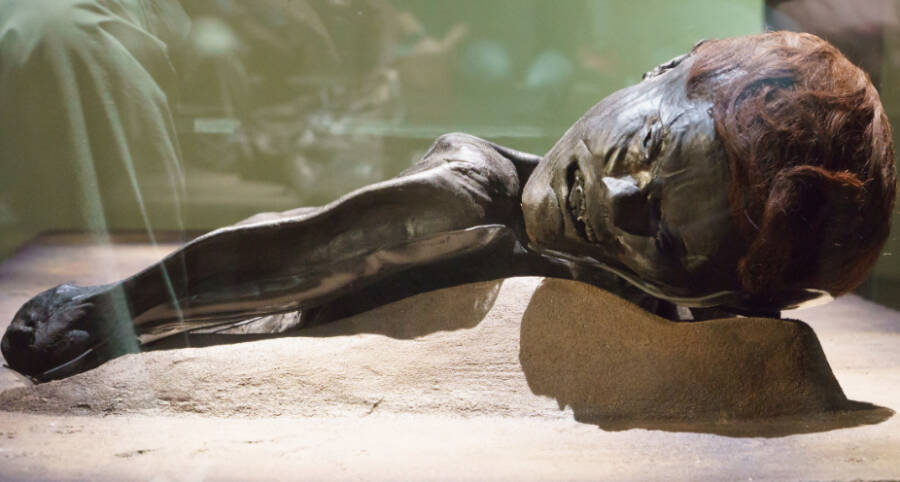 Wikimedia CommonsThe so-called Grauballe Man was found in 1952 with a full head of red hair and a horrid expression on his face — though still looks great for his age.

It was April 26, 1952, and a team of Danish peat cutters was wandering by the bog of Nebelgard Fern, near the village of Grauballe, Denmark. Suddenly, they were confronted by the grim sight of a dead body.

They believed the man must have died somewhat recently, considering he still had a head full of hair and a pained expression immortalized on his face.

They thus thought this was the 65-year-old corpse of Red Christian, a local drunk and peat cutter who went missing in 1887. It was believed he probably had one too many, fell into and then drowned in the bog where he remained unnoticed for decades.

Little did they know that the corpse they were looking at was likely a murder victim — and one that was actually 2,300 years old.

People had certainly fallen drunkenly into bogs and drowned before, such as the two unlucky persons found in some English bogs in Cheshire.

But after a quick examination of this particular victim, however, two things were clear: he was naked and seemed visibly pained during his time of death.

With limited experience in the necessary fields, the locals sought help from real professionals and so the townsfolk contacted scientists at the Aarhus Museum of Prehistory. 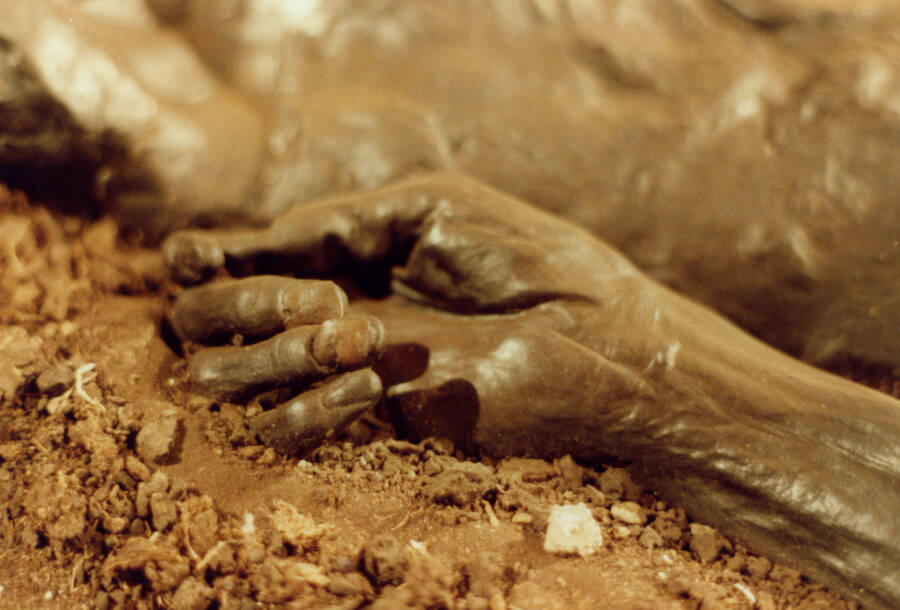 Wikimedia CommonsThe fingers and hands of the Grauballe Man led examiners to deduce that this wasn’t a man who worked for a living — and might’ve been a thief who was killed as punishment.

The next morning, professor Peter Glob arrived at the village to conduct a more rigorous analysis of the mysterious body. After observing a team of peat cutters carefully remove a sizable chunk of peat from the body, Glob transported it to the museum for a more complete examination.

The Grauballe Man was found naked without any personal items. Glob’s team deduced that the man must have been around 30 years old when he died, likely stood at around five feet and seven inches tall, and retained a full head of red hair that was about two inches long.

Despite its glaring hue, it was presumed that this wasn’t actually the man’s natural hair color and that the chemical composition of the bog had changed its appearance over time. 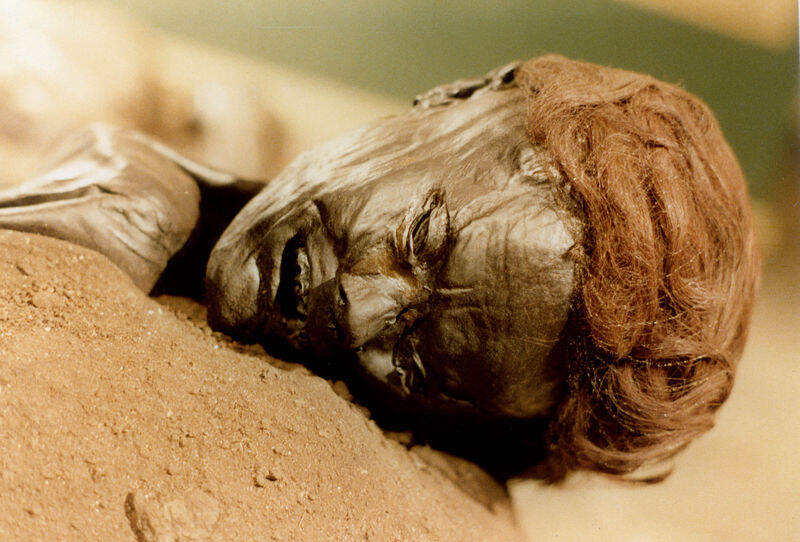 Wikimedia CommonsIt was deduced after rigorous analysis that this wasn’t the man’s natural hair color, but that millennia in the bog had change its hue.

The corpse had slight facial hair on his chin and his soft hands and fingers indicated that he didn’t spend his time doing manual labor.

The most shocking discovery, though, had little to do with what he spent his life doing or how old he was when he died.

A Further Analysis On The Bog Body

The Grauballe Man is merely one of many mummified bodies found in the peat bogs of Northern Europe.

The Grauballe Man belongs to a category of corpses collectively known as “bog people,” or “bog bodies.” These individuals are stunningly well-preserved in their eponymous resting spots.

Because these highly acidic places have low oxygen levels, organic matter can be conserved for millennia.

In order to further preserve the Grauballe Man after he was removed from the bog, he was subjected to a “tanning” process which saw him basically turned to leather and stuffed with bark.

With the use of an electron microscope, the man’s entire body was scanned for clues. His stomach contents, too, provided further insight into his ancient life and a curious death.

The man’s last meal was porridge which contained over 60 herbs and grasses; four of his lumbar vertebrae were missing, his skull was fractured, and his right tibia was broken.

Researchers determined that the herbs and berries weren’t fresh, which would indicate that the man likely died during an off-season winter or early spring. The Grauballe Man’s stomach contents also showed signs of the poisonous fungi ergot.

With so many injuries to the man’s body — not least of which was his slit throat — scientists initially concluded that the Grauballe Man was viscously beaten before he was killed.

It was later determined that the man’s external injuries actually occurred naturally in the bog, however, from pressure or the townsfolk who found and retrieved him.

How exactly the Grauballe Man died remains unknown to this day, but there are two predominant theories that both involve foul play.

The first posits that the Grauballe Man was actually a criminal who was caught and murdered for his misdeeds.

Contemporary Roman historian Tacitus did, after all, record that the tribes of Northern Europe followed extremely strict laws and commonly killed wrongdoers. The smooth hands, therefore, might support the fact that the corpse didn’t work for his meals or anything else.

The second theory argues that the man was sacrificed. Based on this theory, the man’s smooth hands would signify that he was always intended to become a victim of ritualized murder.

Indeed, Tacitus had also mentioned that Europeans admired Mother Nature and that “during spring she visits these tribes and upon departing, a selection of people are sacrificed.” 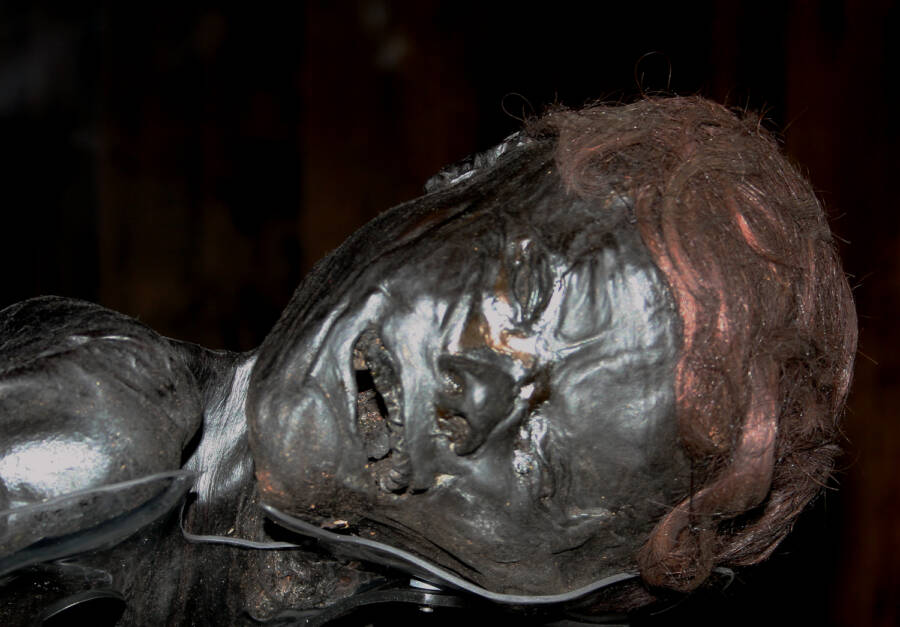 Wikimedia CommonsThe man’s grueling facial expression and his slit throat lent credence to the theory that he was murdered.

The second theory is also supported by the presence of the ergot fungi in the Grauballe Man’s stomach. LSD was originally synthesized from the fungi and hallucinogenic drugs like these have been known to have been used by numerous civilizations as part of religious and ritual ceremonies.

Perhaps, as some others have theorized, the Grauballe Man was sacrificed by townsfolk who believed the town was cursed by an evil spirit and so dumped him into the bog in reverence of a higher power.

Though there is no knowing with certainty what happened to the Grauballe Man, he can be observed in full at the Moesgaard Museum near Aarhus, Denmark, where visitors routinely theorize as to his demise.

After learning about the Grauballe Man, take a look at 14 agonizing photos of the bodies of Pompeii frozen in time. Then, learn about the bodies of dead climbers found on Everest that serve as guideposts.