Spending more time in nature could yield positive mental health results, but limited access in parts of the world is a significant hurdle. 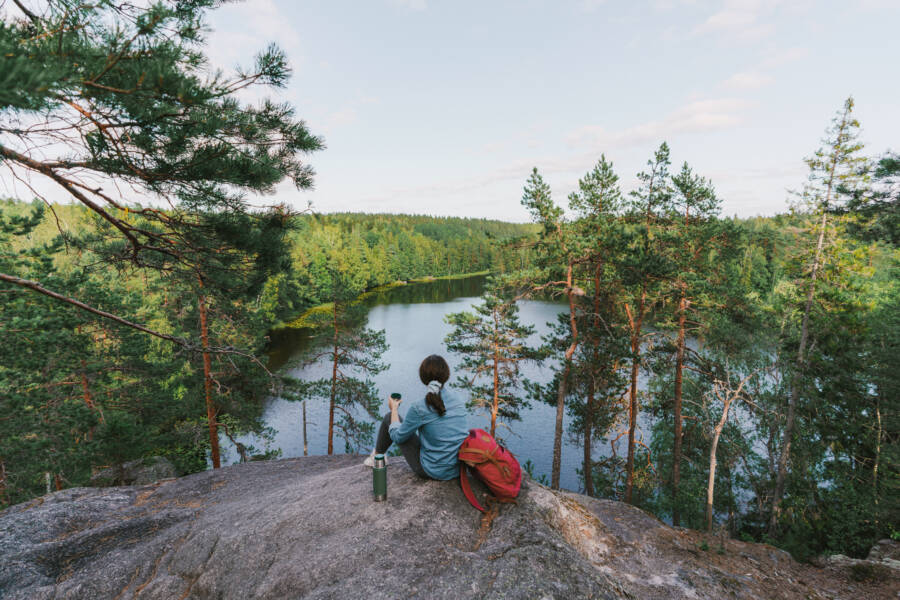 Oleh Slobodeniuk/Getty ImagesFinland has an abundance of forests and nearly 200,000 lakes, providing its people with plenty of natural spaces.

Frequently spending time in green spaces like parks and gardens could improve mental health — and help reduce the usage of prescription drugs for conditions such as anxiety, insomnia, and depression, new research suggests.

The study, published in the Journal of Occupational & Environmental Medicine, was conducted by a team of researchers in Finland, who wrote, “Exposure to natural environments is thought to be beneficial for human health, but the evidence is inconsistent.”

Hoping to paint a more accurate picture of how green and blue spaces in urban environments correlate with mental health benefits, the team collected data from around 16,000 Finnish citizens and surveyed them about the medications they were taking, how many green and blue spaces they could see from home, and how often they actually spent time in those spaces.

For the purpose of this study, the team constituted areas such as parks, forests, gardens, zoos, cemeteries, and natural grasslands and wetlands as “green spaces,” and oceans, lakes, and rivers as “blue spaces.”

Finland, it should be noted, has an abundance of forest areas and relatively green cities — and over 180,000 lakes (there’s a reason it’s called the “land of a thousand lakes”) — meaning that, for most respondents, it’s relatively easy to access green and blue spaces.

Furthermore, the researchers centered on prescription drugs as an indicator of ill health, specifically those used to treat anxiety, insomnia, depression, high blood pressure, and asthma, all of which are common but potentially serious health issues.

Each participant was a city dweller aged at least 25, and most came from the cities of Helsinki, Espoo, and Vantaa — which make up the largest urban area in Finland, according to The Guardian.

They were asked to answer how often they spent time or exercised in green or blue spaces between May and September, with answers ranging from “never” to “five or more times per week.”

And though the numbers varied slightly when factoring in household income and education (notably, the effects were stronger in participants reporting the lowest income), the associations were still largely intact.

The only factor that weakened these links, particularly regarding asthma medication, was body mass index (BMI), likely because obesity is a known risk factor for asthma, the researchers explained.

The research also emphasized the importance of actually spending time outdoors, rather than simply taking in the view of nature while sitting at home.

“This finding is in line with tentative evidence emphasizing the importance of actual use of green space in relation to mental health, and it suggests that the same holds true for other health conditions, such as asthma and hypertension,” the researchers wrote.

Of course, this research doesn’t represent a direct causal relationship between natural environments and improved mental health, but it does highlight a possible connection that needs further examination.

Additionally, it’s worth noting that in other parts of the world, access to green spaces is much more limited than in Finland. Low-income city dwellers in America, for example, face more obstacles when it comes to accessing green and blue spaces — and medications.

This is why, as the researchers acknowledged, urban planning is so important.

“Mounting scientific evidence supporting the health benefits of nature exposure is likely to increase the supply of high-quality green spaces in urban environments and promote their active use,” they wrote. “This might be one way to improve health and welfare in cities.”

After reading about this new study on the effect of green spaces, check out these stunning photos of areas where nature has returned to urban spaces. Or, read about how hallucinogenic mushrooms may offer a cure for depression.