Scientists discovered the new species while studying the lineage of giant tortoises on Madagascar. 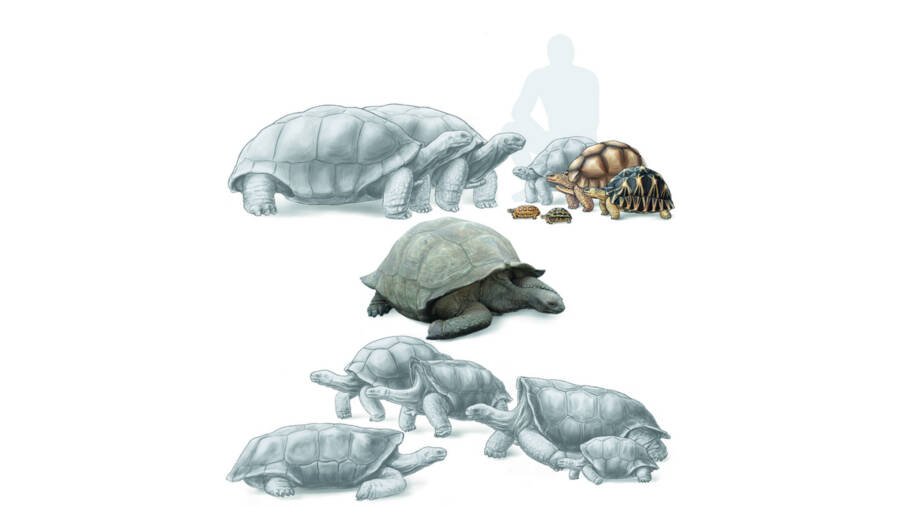 Artwork by Michal Roesser, photo by Massimo DelfinoIllustration depicting native tortoise species of the western Indian Ocean. Living species are those in color; extinct species are grayscale. The newly discovered species is on top, the third, in gray, from the right.

Once upon a time, Madagascar was a hub for giant tortoises. Many species of these massive reptiles roamed the land, but in the modern world only a few of them remain. In tracing the origins and lineage of these modern tortoise species, researchers made a remarkable new discovery: a previously unknown extinct species of tortoise.

Astrochelys rogerbouri, as the species was dubbed in a new study published in Science Advances, went extinct over 600 years ago, but researchers believe that by studying this newly discovered species, they may be able to learn more about its modern descendants.

The fossil used to identify the new species was discovered over 100 years ago, but at the time was thought to be a juvenile leg bone of the giant tortoise Aldabrachelys abrupta. Modern scientific advances, however, allowed a team from the Natural History Museum to conduct a DNA analysis on the fossil — revealing an entirely new species of tortoise.

The new species, Astrochelys rogerbouri, also gets its name from a former colleague, the late paleontologist Roger Bour.

Researchers determined that Astrochelys rogerbouri, like many other giant tortoise species, was likely driven to extinction after the arrival of humans on Madagascar and other western Indian Ocean islands. It’s unclear, however, if this extinction began when the first inhabitants arrived from Asia, or if it occurred later, when the Europeans arrived.

The specimen that was analyzed as part of the study was around 1,000 years old.

“As we get better and better technology, we are able to provide different types of data that often change our perspective,” study co-author Karen Samonds told Live Science. “It’s really exciting to discover a new member of the community.”

The islands of the western Indian Ocean once hosted an abundance of giant tortoises, many of which weighed up to 600 pounds. These massive herbivores also had a profound impact on the natural ecosystem of the islands — even today, the roughly 100,000 giant tortoises living on the atoll of Aldabra devour 26 million pounds of plant matter each year.

However, paleontologists hoping to understand what these ecosystems were like originally face one major hurdle: Many giant tortoise species, like Astrochelys rogerbouri, have gone extinct due to human activity on the islands. As such, it has historically been difficult for scientists to accurately trace the lineage of giant tortoises, and therefore, the islands themselves.

“If we want to know what these island ecosystems were like originally, we need to include giant tortoises — large, extinct members of the ecosystem which took on the role often occupied by large grazing mammals,” Samonds said. “And in order to understand the key role they played, we need to understand how many tortoises there were, where they lived, and how they got there.”

DNA analysis has thankfully opened the doors to finally gaining a clearer understanding of the islands’ history, but it’s still no easy task. In part, research on giant tortoises simply began too late.

Explorers started collecting giant turtle fossils in the 17th century, but by that point, much of the native tortoise population on Madagascar had disappeared, when southeast Asian settlers first colonized the islands. By the 19th century, as Europeans made their way to the Indian Ocean islands, tortoises were regularly being harvested for food and “turtle oil.”

“We often think that humans only started to wipe out species in recent times,” said study co-author and research team leader Professor Uwe Fritz. “In reality, humans exploited local food resources and changed their environment early on. As a result, most of the giant tortoise species in the western Indian Ocean disappeared, leading to a major disturbance of the natural balance of these islands.”

Of the islands and atolls in the western Indian Ocean, it seems only Aldabra was spared from having its native tortoise population completely eradicated. But even with modern advances and centuries of tortoise fossil collection, it’s still difficult for researchers to align these pieces properly.

“Tortoise remains are notoriously fragmented, and i​t’s a real challenge to figure out what a tortoise looked like just from part of a shell,” Samonds said. “In the end, a lot of these fossils sat in a cabinet, unused and unstudied.”

Understanding the prehistoric lineage of these tortoises goes beyond painting a clear picture of the past, though. Studies like this could have a major impact on the future of the islands.

“Conserving the species we have today is one of the main reasons we carry out this kind of research,” said Patrick Campbell, Senior Curator of Reptiles at the Natural History Museum. “Giant tortoises are important for the ecosystem and they support other groups such as certain trees by part digesting the outer shell of seeds … without them, there would probably be fewer trees on these islands.”

After learning about this newly discovered extinct tortoise species, read about the discovery of a rare Galápagos tortoise thought to have been extinct since 1906. Then, learn about the extinct pygmy mammoth species scientists discovered on a Siberian island.