Little did this gigantic 15-foot marine dinosaur realize that its last meal would become the oldest known direct evidence of megapredation ever found. 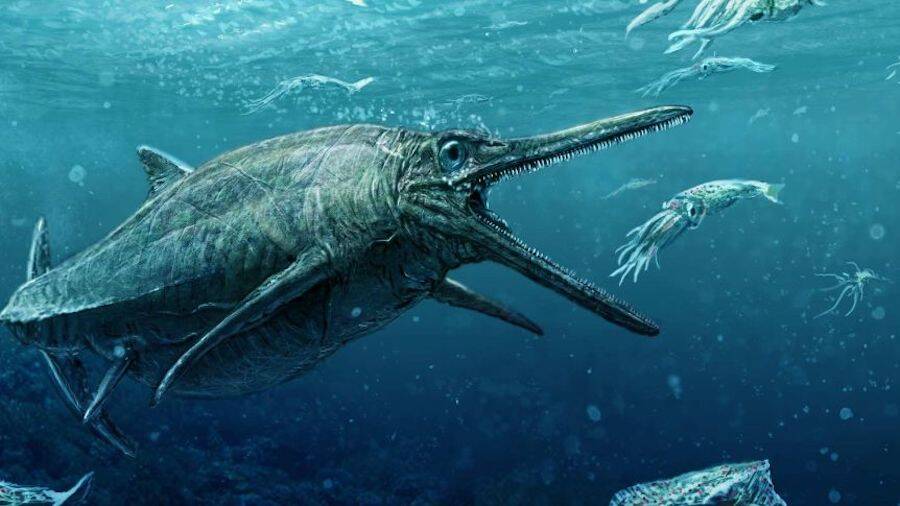 University Of Edinburgh/Todd MarshallIllustration of an extinct marine ichthyosaur reptile on the hunt.

When researchers in China discovered the nearly complete skeleton of a 240-million-year-old ichthyosaur dubbed the Guizhouichthyosaurus in 2010, they actually found more than first met the eye. Inside the extinct marine reptile’s stomach were the remains of yet another — a 12-foot-long thalattosaur.

According to the University of California, Davis, when the 15-foot-long Guizhouichthyosaurus devoured another marine reptile slightly smaller than itself and subsequently died — it unwittingly preserved the very first evidence of megapredation.

“We have never found articulated remains of a large reptile in the stomach of gigantic predators from the age of dinosaurs, such as marine reptiles and dinosaurs,” said UC Davis Professor Ryosuke Motani, who co-authored the study now published in the iScience journal.

“We always guessed from tooth shape and jaw design that these predators must have fed on large prey, but now we have direct evidence that they did.” 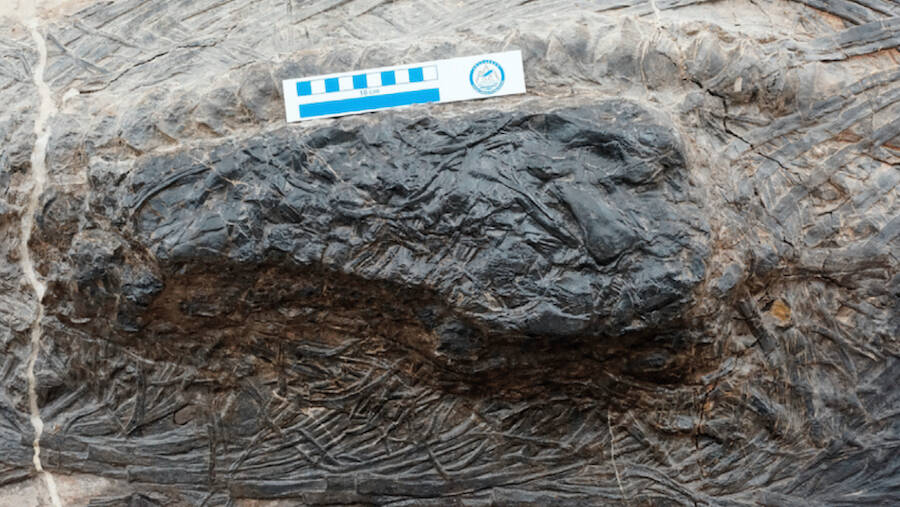 Da-Yong Jiang, et al./iScienceA close-up look at the stomach section of the fossilized Guizhouichthyosaurus ichthyosaur. This is the oldest known direct evidence of megapredation.

Ichthyosaurs had fishlike bodies comparable to modern-day tuna but breathed air like whales or dolphins. Since their status as prehistoric apex predators has always been in question, finding a nearly complete fossilized specimen in China’s Guizhou province in 2010 was a major feat.

Researchers noticed a lump of additional bones within the specimen’s stomach and identified them as belonging to another species of marine reptile known as Xinpusaurus xingyiensis. This species belonged to a group known as thalattosaurs, with the unearthed specimen more lizard-like than an ichthyosaur.

Thalattosaurs generally also had slimmer bodies than ichthyosaurs. This means that although the Guizhouichthyosaurus was only three feet longer than its prey, it also had substantially more heft to its frame. Ultimately, the thalattosaur’s entire midsection was found inside the megapredator’s belly. 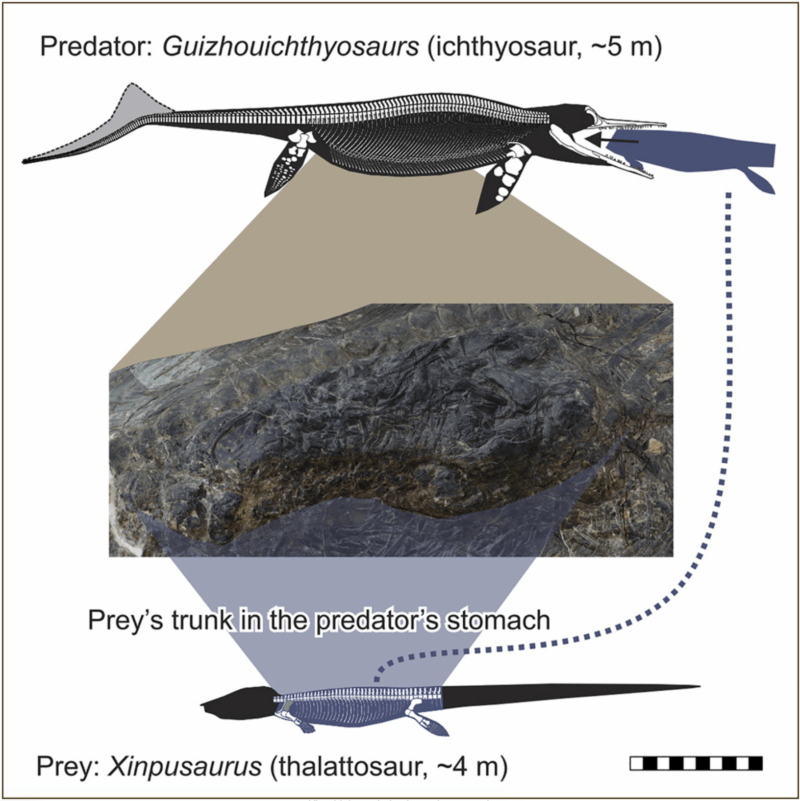 iScienceAn illustration of the prey’s midsection, the megapredator eating it, and the fossilized results.

A fossil resembling the tail section was found nearby.

The biggest predators are commonly assumed to have the largest teeth in order to efficiently slice up their prey. The Guizhouichthyosaurus, meanwhile, had small and peg-like teeth which experts assumed adapted to prey on soft, squid-like animals so abundant in the oceans back then.

Motani and his colleagues are far more convinced that the Guizhouichthyosaurus used its teeth to grip the prey, however — and then crack its spine with the force of a bite. The recovered thalattosaur midsection would attest to this, as it was likely incapacitated, torn apart, and then swallowed.

This strategy is effectively employed by modern-day apex predators like orcas, leopard seals, and crocodiles. 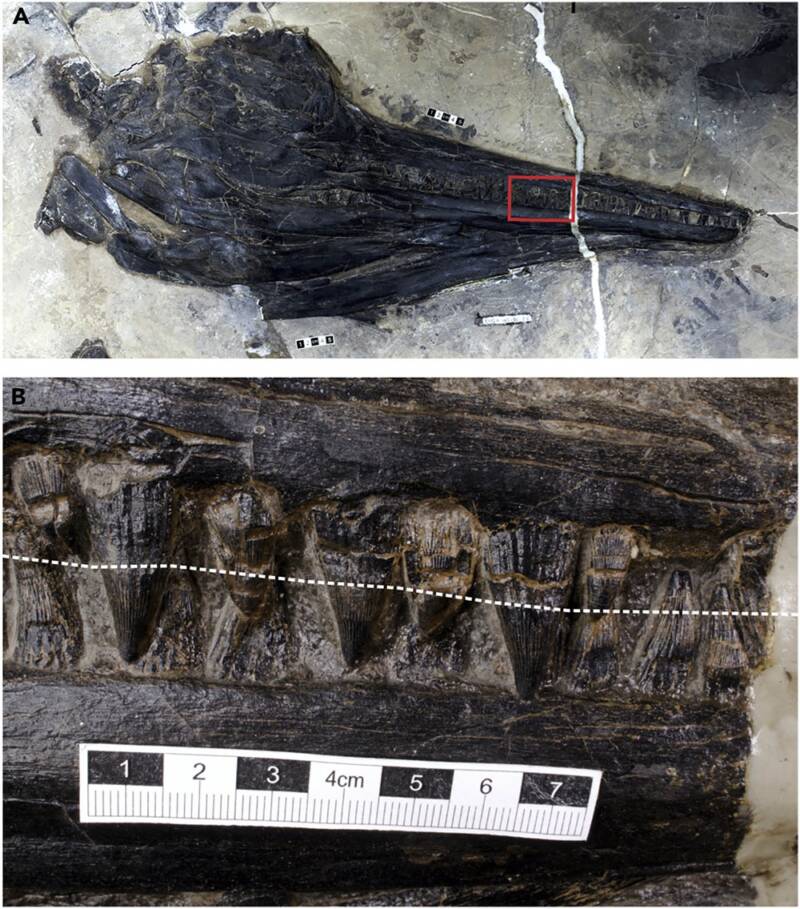 iScienceA close-up look at the teeth of the 15-foot-long apex predator.

While it remains unclear which modern-day vertebrates are the closest living relatives of ichthyosaurs, experts have posited they were an offshoot of diapsids — which include dinosaurs, pterosaurs, and birds. Other schools of thought see ichthyosaurs as distant relatives of sea turtles.

Experts are still learning about ichthyosaurs as fossilized remains continue to be unearthed. Perhaps most astounding was the incident in September 2019 — when an Englishman unveiled an ichthyosaur fossil that he claimed his Christian ancestors kept buried in order to keep the faith.

After learning about the 240-million-year-old “megapredator” that had a 12-foot reptile in its stomach, read about 10 terrifying prehistoric animals that weren’t dinosaurs. Then, learn about the “ancestor of all animals” being discovered in 555-million-year-old Australian fossils.