"They took it home and buried it. You have to remember that fossils weren't really explained until Darwin came along." 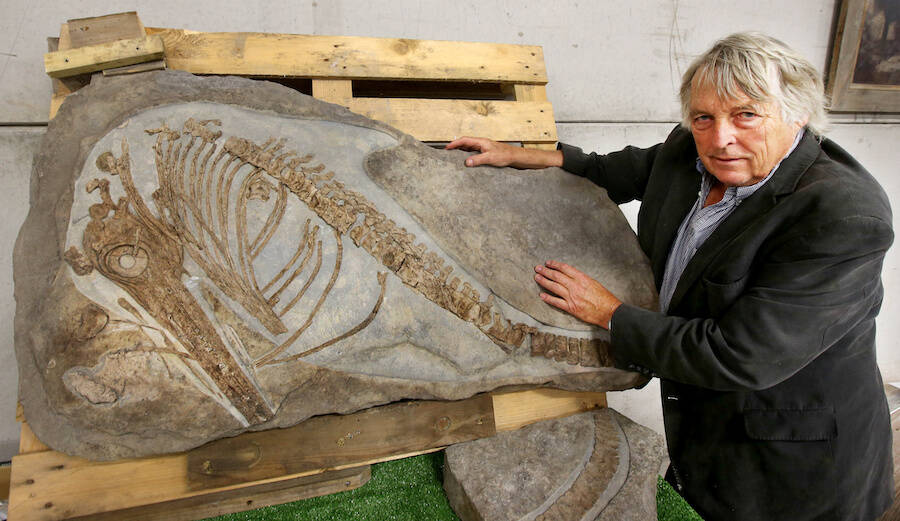 Richard Austin/SWNSJulian Temperley spent more than $3,600 to restore and mount the Ichthyosaurus fossil. He plans on using it on his 20-year-old cider brandy labels.

When a devout Christian family unearthed an enormous Ichthyosaurus fossil in Victorian England, they chose to rebury it to protect their religious beliefs. More than 150 years later, that same family has changed its mind, and decided to put the 90-million-year-old skeleton on display.

According to IFL Science, the fossil was found in 1850 by Somerset, England’s Temperley family. The family of builders’ merchants stumbled upon it while digging in a quarry and brought it home.

It was their devotion to creationism, however, that made the Temperleys feel they were “denying God” by displaying the prehistoric fossils. And so they returned the prehistoric remains to the dirt, burying it in their backyard. The find predated Charles Darwin’s On the Origin of Species by several years, and was thus a problematic discovery.

The fossil stayed hidden for nearly two centuries — until now.

Wikimedia CommonsThe earliest recorded discovery of an Ichthyosaurus fossil came in the early 1800s. The largest ever found was between 10 and 11.5 feet, in the mid-1990s.

Cider brandy maker Julian Temperley’s decision to showcase the stunning relic 169 years after its discovery is partly rooted in business. The fossil’s likeness will soon be featured on the company’s product labels.

Ichthyosaurus means “fish lizard,” and is part of an extinct marine reptile group that partly resembled dolphins. The earliest recorded discoveries of this creature came in the early 1800s, when English paleontologist Mary Anning established herself as a fossil-finding expert.

While Temperley’s private, single-item collection isn’t the largest of these uncovered specimens — that title belongs to the 10 to 11-and-a-half-foot-long fossil found in the mid-1990s — its origin story is quite enthralling.

“It was found by either William Philosophus Bradford or John Wesley Bradford — my great-great-grandfather or his father — in around about 1850 in their lime quarry at Pitsbury near Langport,” said Temperley.

“They’d dug up sedimentary rock and burned it for the lime — and it was while they were digging the quarry that they came across the Ichthyosaurus. They took it home and buried it. You have to remember that fossils weren’t really explained until Darwin came along.”

“Up until then, if you believed in fossils you were denying the Bible saying God created Day One, and so on,” Temperley explained. “Anyway, eventually Darwin came along and convinced people that fossils weren’t anything to do with Satan.”

Despite Julian Temperley and his immediate family growing up in the 20th century with modern education and no further fear of social retribution, the Ichthyosaurus stayed buried in the garden. They’d dig it up whenever vacationing at the Thorney property to take a gander, but always covered it back up.

“But after the flooding of 2013-14 we realized it was not a good idea to leave it buried and I thought we ought to look after it,” said Temperley. “The teeth are still there in the enamel form after 90 million years….We will now keep it on the wall of our cider brandy bond where it will be part of the family history.”

As for the new branding aspect of his cider brandy, Temperley feels the animal, which went extinct around 95 million years ago, shares his company’s ethos.

“Putting it with aging spirits seems like the right thing to do.”

After learning about the devout Christian family who discovered a prehistoric Ichthyosaurus fossil only to rebury it to protect their beliefs in creationism, read about the 384-year-old shopping list discovered under the floorboards of a historic English home. Then, learn why Pope Francis believes “it’s better to be an atheist than a hypocritical Christian.”