In the video, the creature completely transforms its body and pretty much blows the scientists' minds. 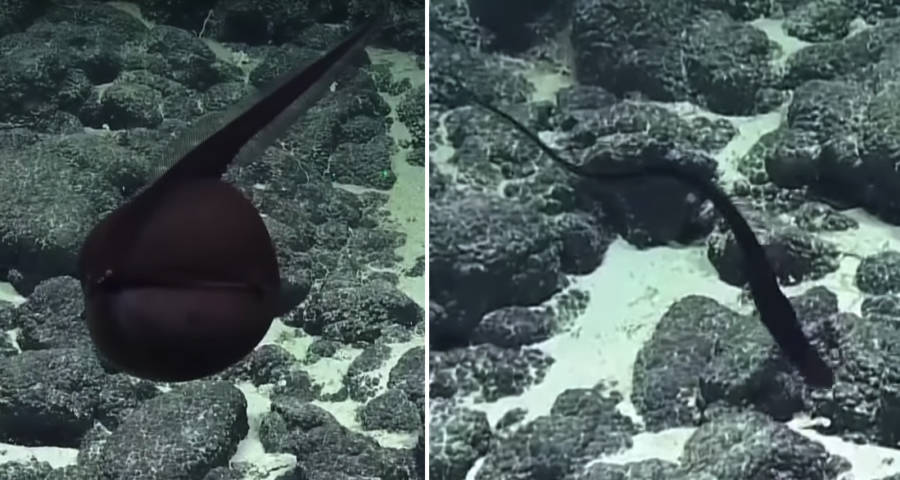 YouTubeLeft: The inflated gulper eel, Right: The gulper eel after it deflated itself.

When teams of scientists set out to explore the deep ocean, they expect to find weird creatures. But sometimes even the experts are utterly unprepared for their discoveries.

A mysterious creature caught their eye in the frame of their camera. In the video, the scientists awe and speculate over the creature and after two minutes of puzzlement, they finally figure out that the bizarre, black blob was actually a rare gulper eel.

Footage captured by the Nautilus of the gulper eel.

“What is that?” one scientist asks. “Looks like a muppet,” another quips.

The team’s camera slowly approaches the animal. That’s when things get really weird. The animal’s body is round and bloated with a skinny tail which extends from the back.

This strange appearance causes one researcher to ask, “Is it engorged or is it like that?” While another simply says, “I think he ate too much.” The camera then zooms closer to the animal to reveal its face which features a pair of creepy “googly eyes.” 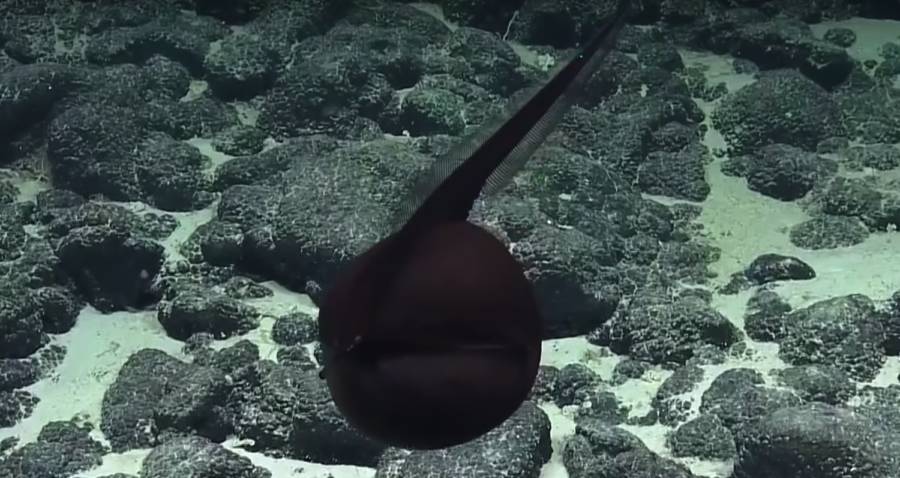 Things get stranger still when the animal suddenly inflates its body like a balloon. One of the observers notes that the creature could have done this as a way to ward off predators — in the same manner that a cat might puff its tail. They speculated that it might feel threatened by the team watching it:

“That’s his defense,” a scientist says in the video. “Let me blow up so I can show them how big I am.”

The animal then starts to violently shake its body which looks like a black balloon deflating.

The creature then turns to face the camera. A line which ran across what the scientists thought was the creature’s body opens up to reveal a terrifying, gaping mouth. 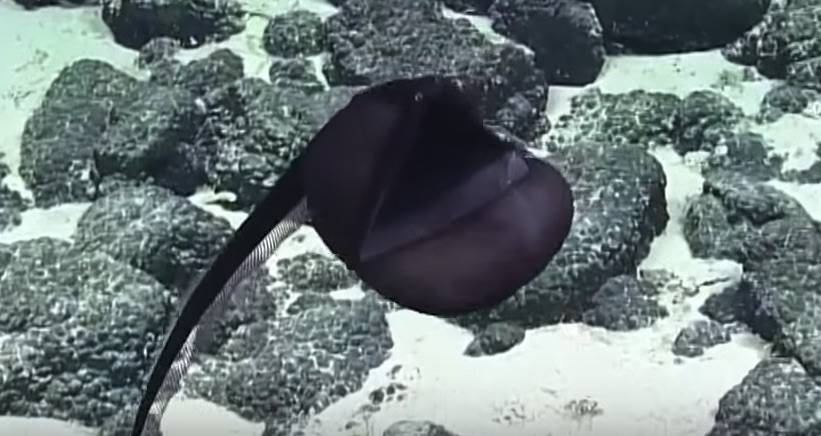 The mouth then suddenly shuts to reveal the skinny, slender body of an eel. Once returned to its normal shape the scientists are able to identify that the bizarre creature actually is a gulper eel.

According to National Geographic, the gulper eel can expand its mouth to huge proportions, which allows the animal to consume larger prey. This characteristic is also how the animal came to be referred to as the pelican eel because of its large, scoop-like mouth which resembles that of a pelican.

Every name given to the gulper eel gives you more insight into this slender eel's ballooning behavior: umbrellamouth eel, pelican eel, and it's scientific name Eurypharynx pelecanoides! pic.twitter.com/kVbP6pp8EI

According to tweets from Nautilus, the eel was only a juvenile, as the species can reach lengths of three feet when fully developed.

Not much is known about this mysterious and elusive animal, but new research and observations of the animal are helping scientists to piece together more information. It is theorized that the animal’s ability to inflate to huge sizes is merely a backup plan for the animal in case their typically small-sized prey becomes unavailable and only larger fish remain, according to National Geographic.

The footage captured aboard the Nautilus is bizarre, crazy, creepy, and above all other things, just plain cool. One scientist in the video said it best when he simply stated, “That was awesome.”

Want more bizarre sea creatures? Next, check out this video of two anglerfish mating which shocked scientists. Then take a look at the 13-foot-long creature that washed up on a beach in Mexico.