Of the eight candidates on the ballot, four have been convicted of felonies including assault with intent to murder. 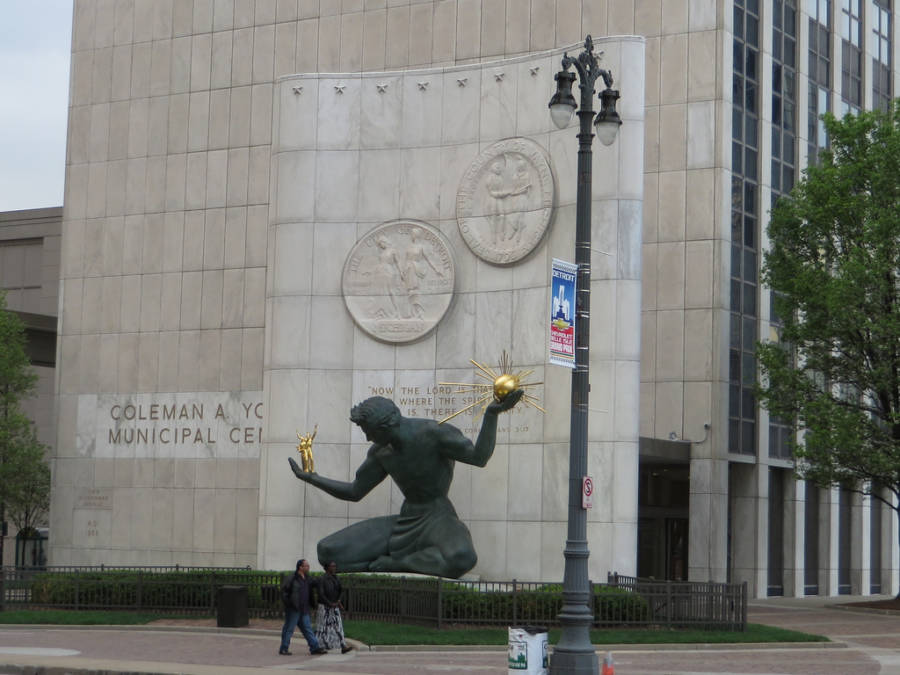 Ken Lund/FlickrThe Coleman A. Young Municipal Center, which serves as the headquarters of Detroit’s city government and houses the office of the mayor.

When Detroit residents cast their votes in next week’s mayoral primary, they’ll be choosing from a field of eight candidates — four of which are convicted felons.

While the other four, including frontrunners incumbent Mayor Mike Duggan and state Sen. Coleman A. Young II, have no records, media attention is now focused on the four that do.

The Detroit News recently detailed each of the four candidates’ multiple convictions, some decades old, one as recent as 2008, and many of them for violent offenses. In fact, two candidates were charged with assault with intent to commit murder.

One such candidate is 58-year-old Donna Pitts, whose first conviction was for receiving and concealing a stolen car in 1977. A decade later, she got involved in a shootout with an auto collision shop owner over a bill and was charged with assault with intent to commit murder, ultimately being convicted of assault with intent to do great bodily harm, as well as a gun charge.

After serving four years for that crime, Pitts was charged with another gun-related offense after police found her carrying a concealed weapon in late 2002. Whether it’s this incident or her several other motor vehicle offenses, Pitts claims that both police and the justice system have discriminated against her and that some of the allegations are false.

As mayor, Pitts says she would use the lessons learned from her experiences to help fight discrimination in the justice system, saying of her convictions, “I hope (voters) don’t look at it as negative but as my experience, and I can help. I want to fight for them.”

In addition to Pitts, the other mayoral candidate charged with assault with intent to murder is 46-year-old cosmetologist and salon owner Danetta Simpson. Her record shows a 1998 conviction stemming from an incident in which she fired a gun, ultimately injuring no one, at a woman who had been living with the man who fathered two of Simpson’s children.

Like Pitts, Simpson, who served one year of probation for her offense, believes that she was mistreated by the justice system and states that she’ll address the system’s unfairness as mayor. “I was a wrongfully convicted felon, overcharged for a crime I did not commit,” Simpson said.

In a more recent yet less violent incident, candidate Articia Bomer, 45, was charged with carrying a concealed weapon in 2008. Police found a pistol in her car, but Bomer claims that the gun wasn’t hers. She had just purchased the car from a gun owner and it had since been driven by several other people.

Bomer thus called the conviction “frivolous” but nevertheless served one year of probation and has faced no charges since. “I want voters to know that they should never judge a book by its cover,” she said. “I am a law-abiding citizen.”

Like Bomer, candidate Curtis Christopher Greene served probation time, in his case for a 2004 incident in which he fled police following a traffic stop and was charged with delivering and manufacturing marijuana. A year later, he was charged with publishing a fraudulent check and plead guilty to violating the terms of his probation two years after that.

He’s since gone back to school, become an ordained minister, and written three books. As mayor, he’d like to enact programs that would help ex-offenders overcome the past.

Beyond these four new candidates, Detroit’s past itself includes several politicians with felony records, among them former Mayor Kwame Kilpatrick who was convicted on corruption charges in 2013 over several incidents of extortion and fraud that saw him pocket kickbacks in excess of $1 million, authorities claim. He has since attempted to have his 28-year prison sentence overturned, with no luck yet.

Today, Kilpatrick maintains his innocence, as do many of the current mayoral primary candidates. And whether or not any of these candidates are, in fact, guilty, not everyone believes that their criminal records are a bad thing.

As political consultant Greg Bowens, a former press secretary to Detroit Mayor Dennis Archer and NAACP activist said, according to The Detroit News:

“Black marks on your record show you have lived a little and have overcome some challenges. They (candidates) deserve the opportunity to be heard, but they also deserve to have the kind of scrutiny that comes along with trying to get an important elected position.”

The city of Detroit will find out whether the voters agree on August following the election on August 8, which will narrow the field down to two before the final election this fall.

Next, see 42 heartbreaking photos of abandoned Detroit. Then, view 24 harrowing photos of the 1967 Detroit riots.