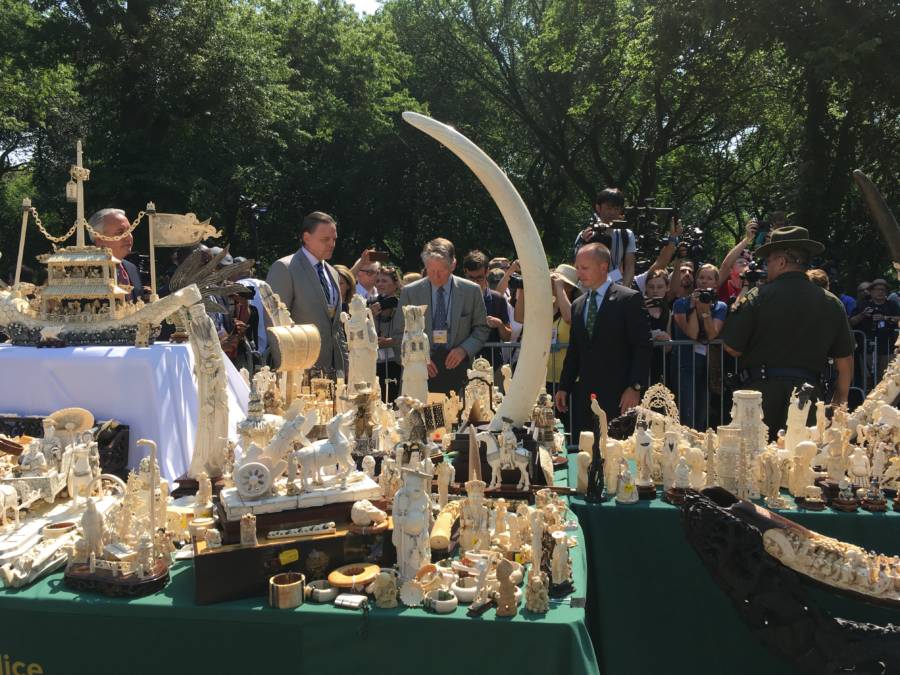 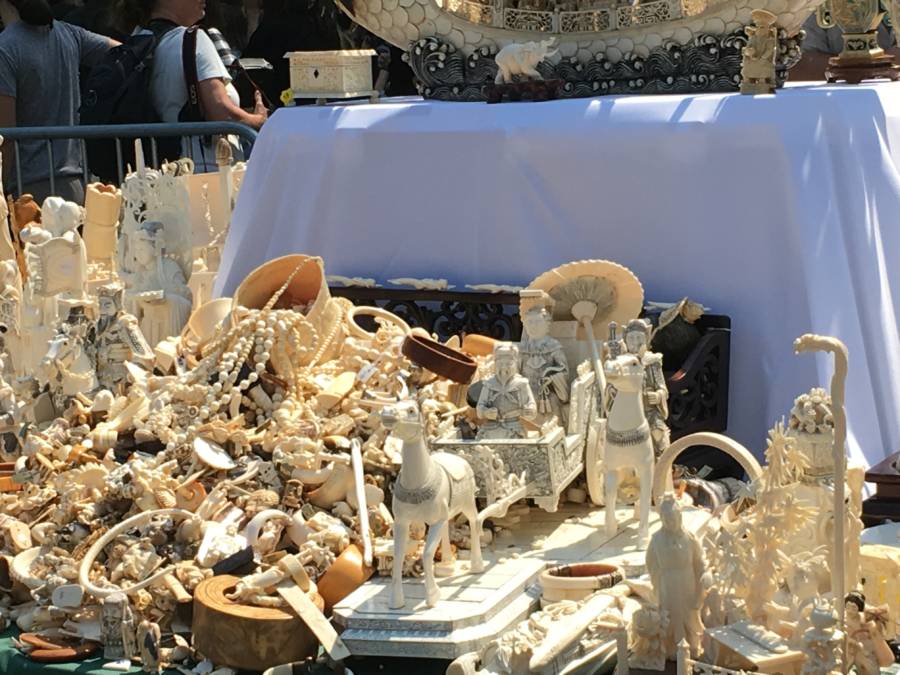 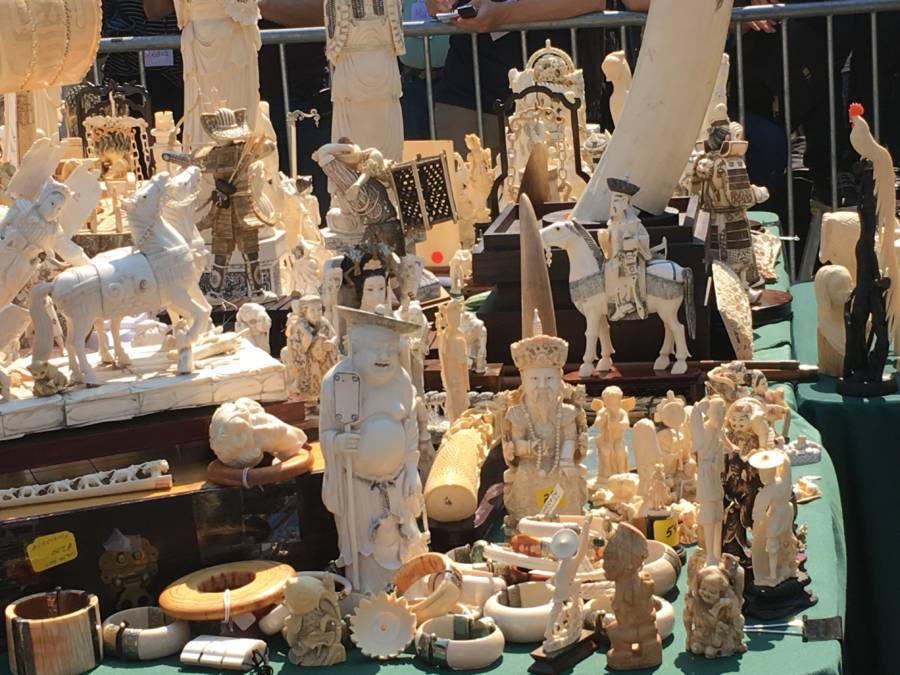 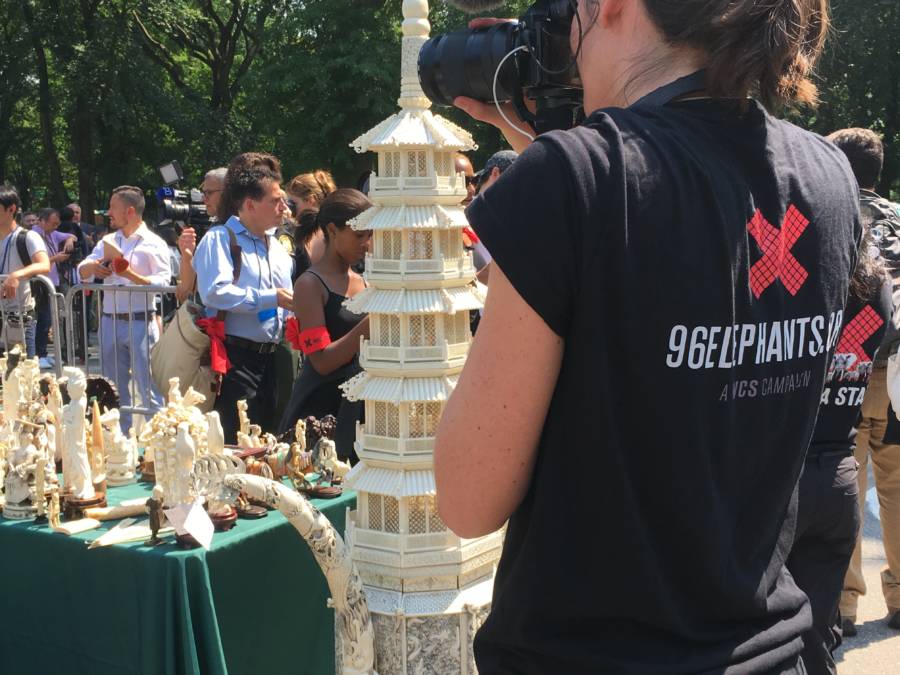 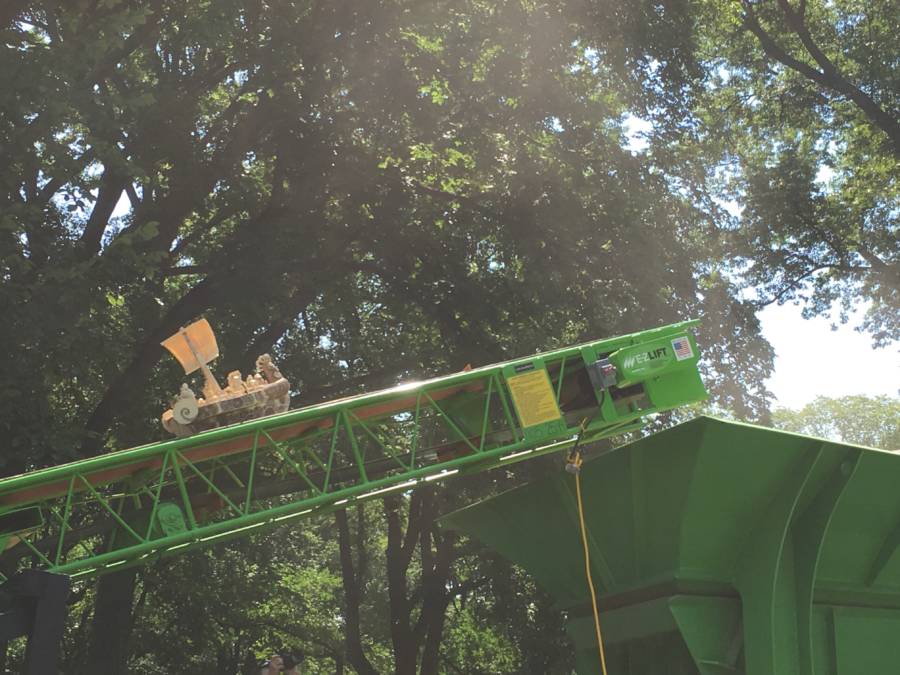 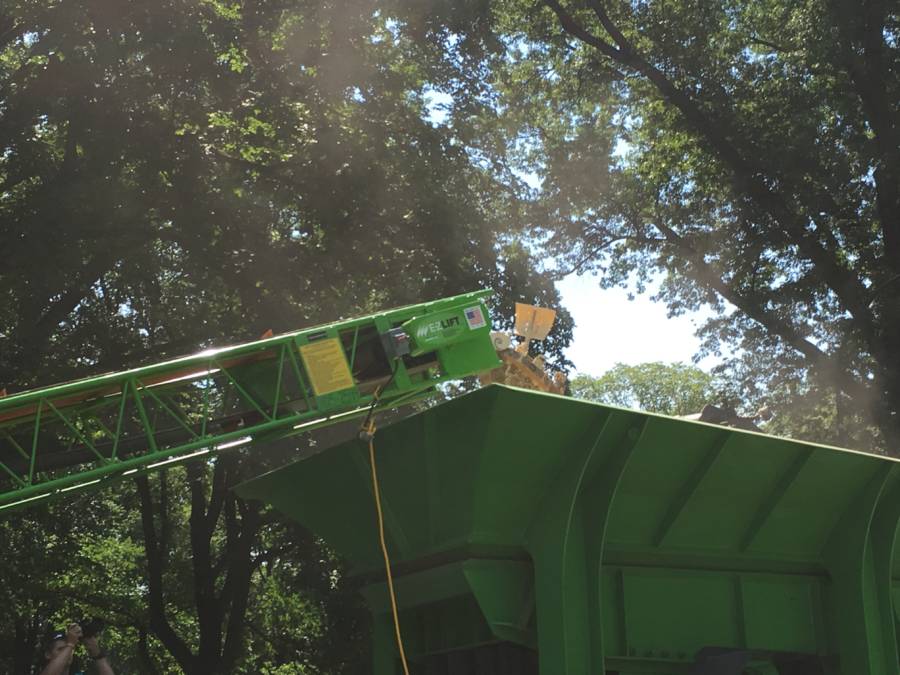 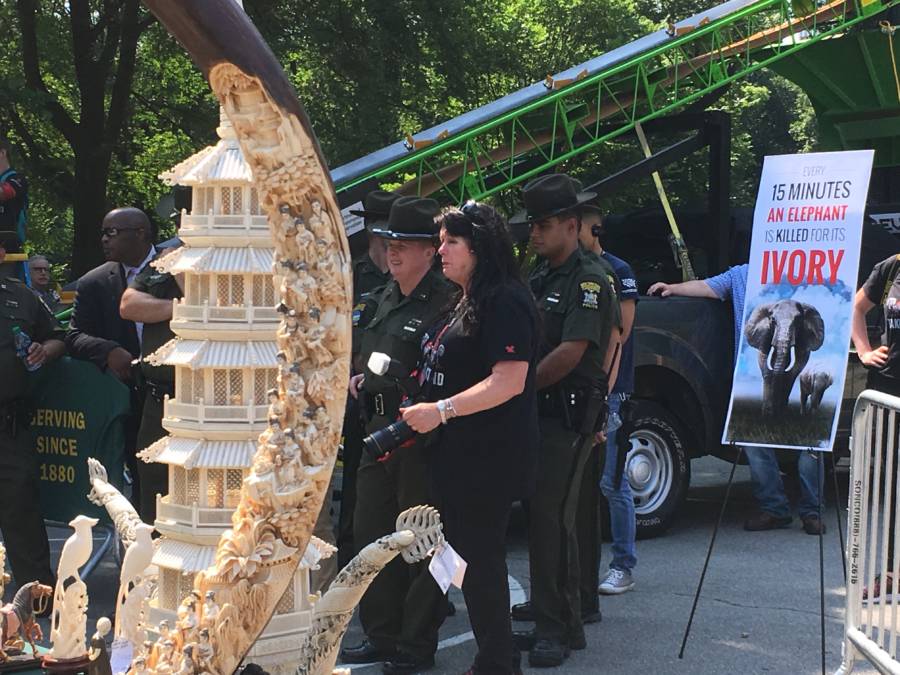 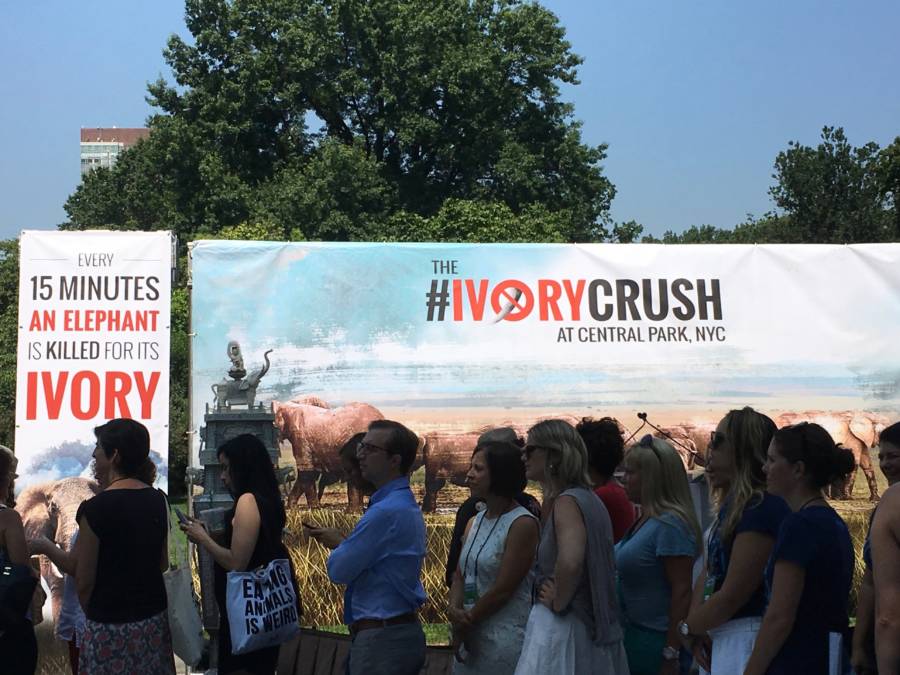 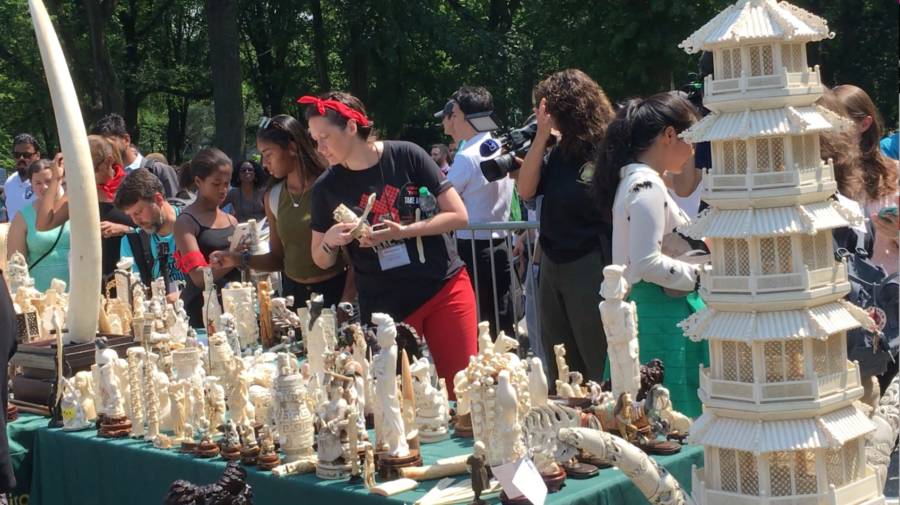 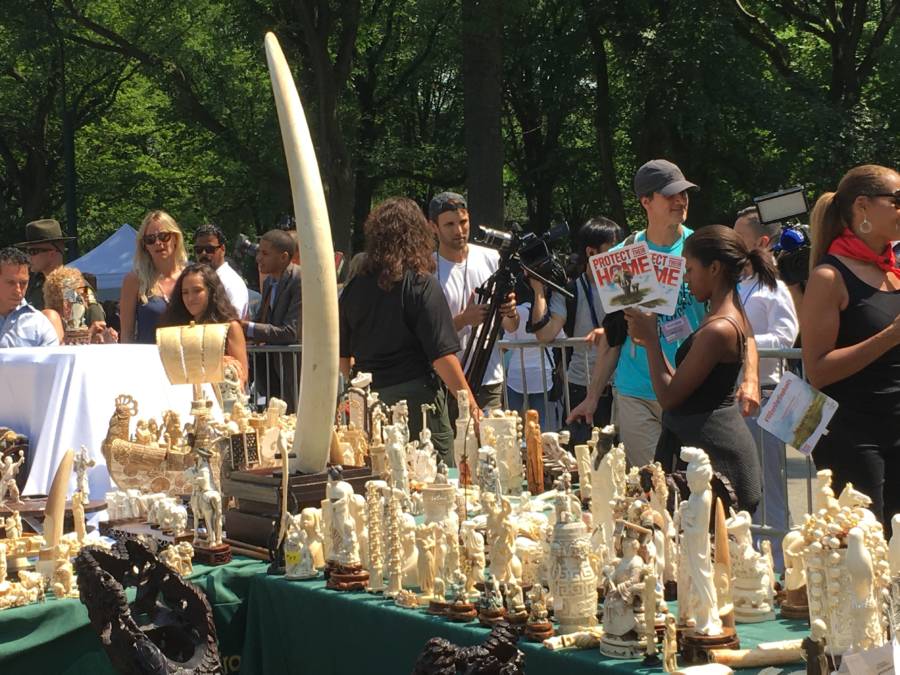 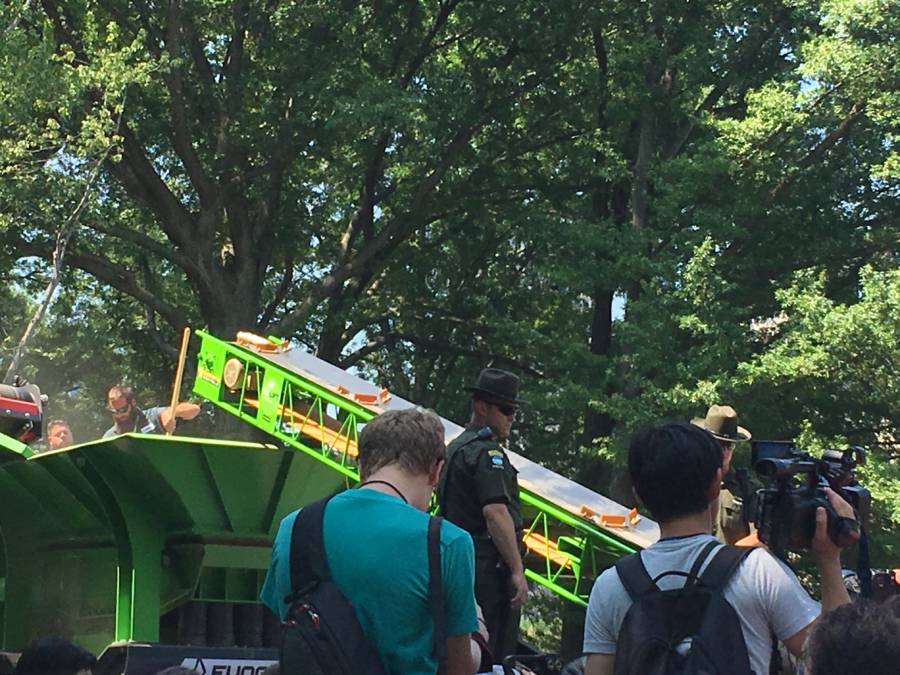 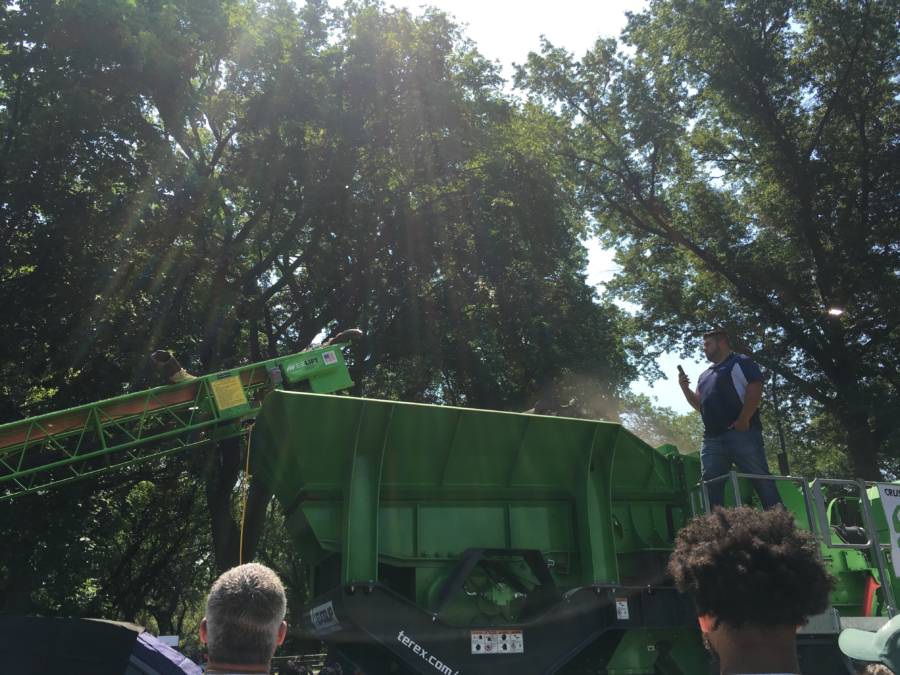 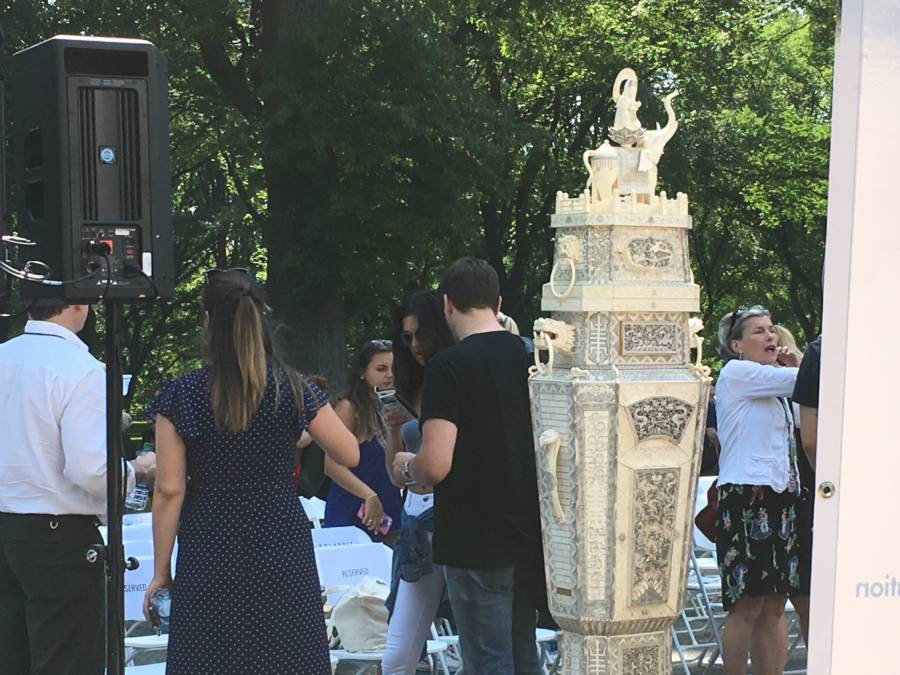 On a hot Thursday in the middle of Central Park, nearly two tons of ivory jewelry, statues and tusks were on display.

The trinkets were estimated to be worth as much as $8 million. But officials from the Wildlife Conservation Society say that number isn't accurate, since the elephant lives lost to make them were invaluable.

Which is why they destroyed the items in a massive green crushing machine.

"By crushing a ton of ivory in the middle of the world's most famous public park, New Yorkers are sending a message to poachers, traffickers and dealers who try to set up shop right here on our streets," John Calvelli, the director of the 96 Elephants Campaign, said. "We won't stand for the slaughter of elephants. Nobody needs an ivory brooch that badly."

After several speeches and a song, attendees were invited to select a piece -- tusks, boats, buddha figurines -- and place it on the conveyer belt that would carry it to its doom.

The event was hosted by the New York Department of Environmental Conservation, which confiscated all of the ivory after the state's 2014 ivory ban was passed.

This was the 30th known ivory crush in the world. All together, 22 different governments have destroyed about 270 tons of ivory as a symbol of their commitment to ending the poaching crisis.

According to the Wildlife Conservation Society, which was a partner in putting on the event, an elephant is killed every 15 minutes for its tusks -- meaning about 96 elephants die each day.

These numbers indicate a growing poaching threat to the African forest elephant population -- which some scientists suspect could go extinct within the decade -- as well as the African savannah elephant populations, which have declined by as much as 30 percent in the past decade alone, according to the Paul G. Allen Family Foundation.

The pulverizing of valuable trinkets isn't just a symbolic nod to the majestic creatures (who were given a moment of silence as part of the program). Similar crush events have been held since 1989 for a wide range of emblematic and practical purposes.

"Doing so helps reduce speculation (the existence of stockpiles drives up speculation) and clearly signals to poachers and traffickers that the U.S. will not reopen its ivory market," an event press release explained. "Thereby reducing their incentive to kill elephants."

It also helps avoid theft, since one-third of government ivory stockpiles have been robbed, according to a 2010 TRAFFIC report.

The items -- which are now nothing more than itty-bitty fragments of tusk -- included $4.5 million-worth of goods seized from Metropolitan Fine Arts & Antiques in 2015. The store's owners pled guilty to participating in the illegal trade last week, and agreed to donate $100,000 to endangered species protection efforts.

"It's a way to tell the world that ivory shouldn't be coveted, it should be destroyed," Wendy Hapgood, the founder of the Wild Tomorrow Fund, said. "It belongs only on an elephant."

This wasn't the first crush to grace the Big Apple's main landmarks. In 2015, one ton of ivory was demolished in Times Square.

Attendees described the experience of holding a tusk and watching it get destroyed as emotional, but also empowering.

"I just held a piece of ivory and I gave it to the officers to crush it, and it's overwhelming. It's emotional," Prarthna Vasudevan, a senior manager at Conservation International, said. "But it's also very eye-opening, it's positive, and it's hopeful."

Vasudevan and her colleague, Diego Garcia, added that events like this are important to make people feel more connected to the cause. Even when they're oceans apart from where the poaching is taking, citizens can encourage their governments to instigate ivory trade bans in their own states and cities.

"It's a combination of writing to your congressman, to your mayor, making the noise where you are," Garcia said. "That does make a huge difference."

Next, read about the poacher who killed 100 elephants with cyanide earlier this month. Then, watch an elephant stranded nine miles out at sea get rescued by the Sri Lankan Navy.