Killing an elephant is punishable by death in Sri Lanka. Saving a drowning one is just really cool. 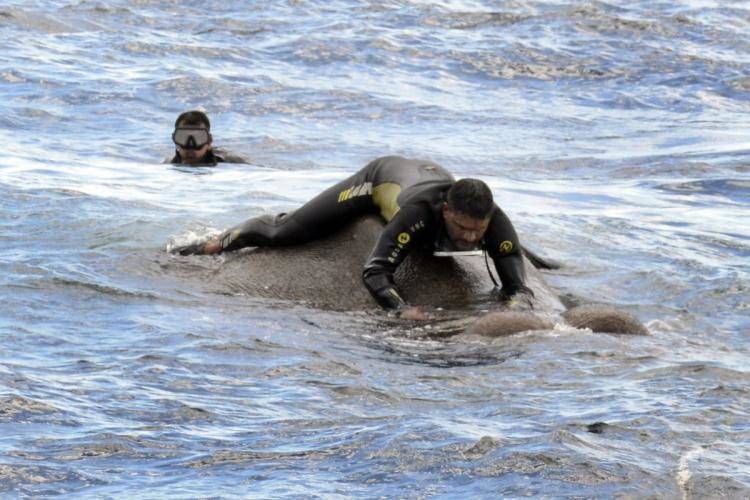 No other land mammal (excluding Michael Phelps) is better at swimming than the elephant.

But when a particularly ambitious Asian elephant got caught in a strong riptide off the coast of Sri Lanka, things weren’t looking good.

The struggling creature was seen by the Sri Lankan Navy early Tuesday, swimming nine miles away from land and desperately trying to keep its trunk above the crashing waves.

The patrol boat called in three other vessels and — with the help of navy divers and the Department of Wildlife — began an incredible 12-hour rescue operation to get the animal back to shore.

In the video, you can see divers tying ropes around the elephant and leading it back to shore.

This was an especially important save, given that only 2,500 to 4,000 of this particular species have survived massive deforestation and city development, according to the World Wildlife Fund.

The Sri Lankan subspecies is the largest kind of Asian elephant — weighing as much as 12,000 pounds and growing up to 10-feet-tall. They travel in herds of 12-20 individuals, which are led by the reigning oldest female. (Because feminism.)

The population has plummeted by 65% in the last century, prompting the Sri Lankan government to implement a law that makes killing one of the majestic creatures punishable by death.

This isn’t the first time an elephant has swum into risky situation.

“I well remember flying in the early 1990s over barren and deserted islands off the Kenyan coast near the Somali border and seeing the bones of elephants that had been killed there,” Joyce Poole, a founder of the conservation group Elephant Voices, told The Washington Post. “Clearly they swam from the mainland to the island only to meet their deaths there.”

And just last month, footage from a Korean zoo showed two adult elephants rescuing a baby that had fallen into a pool:

Both of these elephants likely learned a valuable lesson about swimming in the deep end — hopefully a lesson they’ll never forget.

Next, check out these incredible first-ever photos of a wild lioness nursing an orphan leopard cub. Then, watch a baby hippo try to convince an unhappy crocodile to play with it.