Ten More Elephants, Including A Mother And Baby, Poisoned By Poachers In Zimbabwe

Poachers have killed ten elephants in Zimbabwe using cyanide poison. The increasingly popular killing method is said to be slow and painful. 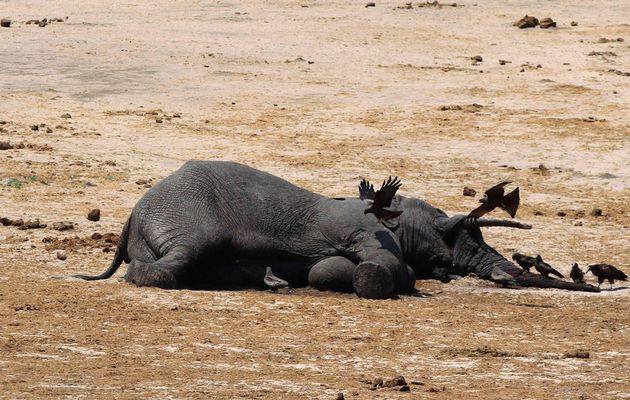 As animal rights activists work to protect Africa’s most beautiful and endangered animals, poachers continue to find sneakier and more horrific ways to kill them.

Last week, ten elephants were found dead in and around Zimbabwe’s premier game reserve. A bucket of poison was found nearby.

Since a group of poachers used poison to slaughter 100 elephants at once in 2013, it has become an increasingly popular hunting method. The criminals dilute sodium cyanide or paraquat — a highly toxic agricultural herbicide — and then plant the substance around the parks.

It’s a particularly insensitive method of killing, since it typically kills many animals that the poachers aren’t even targeting.

In this case, for example, a baby elephant too young to have grown tusks was killed. Oftentimes lions, hyenas, jackals, birds, antelope, and zebra are also lost either from eating contaminated meat or drinking out of the poisoned buckets and watering holes.

The method is preferred by poachers because they don’t have to get too close to the dangerous animals, and they can kill them silently without a gun blast to draw attention from law enforcement.

10 elephants poisoned with cyanide in Zimbabwe.
We need to stop the slaughter!https://t.co/hmoJSEyCA5 pic.twitter.com/yACeEe6EmC

The deaths from this method are said to be slow and painful for the animals.

Desperate to put an end to the slaughter, officials in Zimbabwe have issued security instructions to kill any poacher seen in a national park.

“Poachers lucky to be captured alive are immediately given a minimum jail sentence of nine years if they are found with ivory or poison,” Trevor Lane, the co-founder of an anti-poaching non-profit, told the Guardian.

Three suspects have already been arrested in connection with this most recent incident, one of whom was found with ivory (though only some of the dead elephants had their tusks sawed off).

In the past ten years, Zimbabwe’s elephant population has decreased by about 10,000 elephants.

Next, read about the big game hunter recently crushed by an elephant. Then, see why drones might be the answer to Africa’s elephant poaching problem.