Africa lost 30 percent of its elephants to illegal poaching between 2007 and 2014. Drones may be the solution. 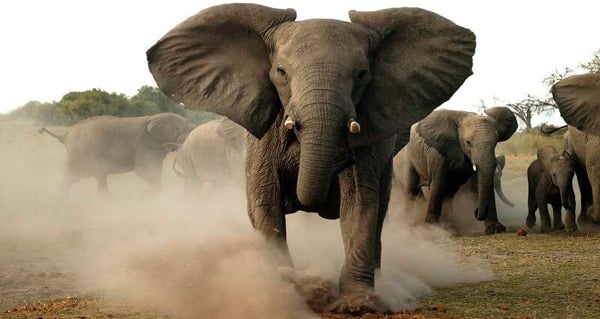 Africa lost a little less than a third of its elephant population between 2007 and 2014 thanks to illegal poaching, and conservation groups have brought in new tools to improve the situation.

The local government has given the program special permission to fly the drones over distances greater than 15 miles during nocturnal hours, according to The New York Times. And while the drone operators are having difficulty actually catching poachers despite the thermal imaging capability, the drones have proven useful as an airborne deterrent.

UAV & Drone Solutions (U.D.S) is the contractor African Parks is using to handle the day-to-day operations. Their drones are fixed-wing unmanned aerial vehicles (AUV) that look more like airplanes than retail drones. They are capable of transmitting live video, tracking telemetry, and flying for eight hours per battery change.

“U.D.S. does this better by far than anyone else,” said John Petersen, the board chairman of the Charles A. and Anne Morrow Lindbergh Foundation, to The New York Times. “There’s no one else in the world we know of that are flying regular missions almost exclusively at night.”

It costs $100,000 a month to run the U.D.S. program. Lindbergh Foundation’s Air Shepherd program, the Peace Parks Foundation, and a Google grant through the W.W.F pay for roughly half.

The high cost of the program compared to its low return on investment is a thorny issue. Africa’s parks cover huge swaths of territory and it’s difficult to accurately cover all of it while coordinating with park rangers on the ground, who could be hours away.

“I am very convinced that we are onto something, but we’re only beginning to understand how this tool can be used effectively,” Otto Werdmuller Von Elgg, U.D.S.’s co-founder, told The New York Times. “The challenge now is determining how we integrate drones into existing anti-poaching operations.”

The next step for the program is utilizing machine-learning technology to teach the software running the drones how to differentiate between human and animal automatically. This would mean that the drones would not be limited to the attention span of the person sitting behind the monitor.

“Once this is finalized, instead of having hours and hours of video to look at that doesn’t have meaningful information, rangers will get a ping when there’s a high chance that a poacher has been detected,” Serge Wich, an ecologist at Liverpool John Moores University in Britain and co-founder of the nonprofit Conservation Drones, told The New York Times.

Next, read up on the poachers that poisoned a rare giant tusker elephant to death, before finding out why poaching is causing the African elephant to become tuskless.