Elephant Herd Tramples One Poacher To Death, Injures Another

Earlier this month, a herd of Indian elephants fought back against a gang of poachers unfortunate enough to cross their path. 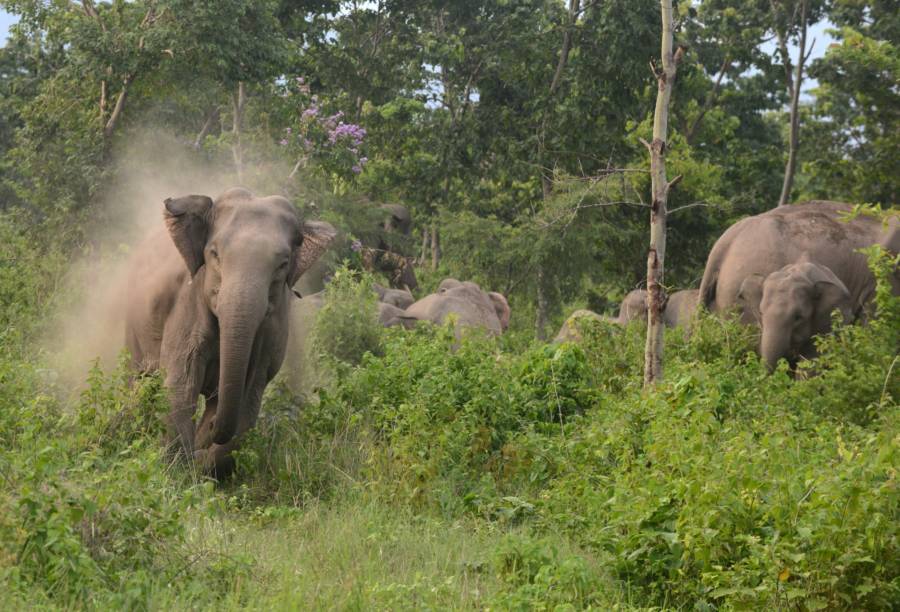 A herd of wild elephants trampled a suspected poacher to death and seriously injured another in a south Indian forest near the Thattekad bird sanctuary on January 4.

The two suspected poachers were part of a four-member gang that had entered the restricted forest to hunt illegally, forest officials told The Indian Express.

The group had apparently snuck into the woods late at night and didn’t notice that elephants were in their path until it was too late to escape the trap and avoid the stampede.

“One of the gang members, [a 26-year-old named] Tony was crushed to death by an elephant,” forest officials told The Indian Express. “In the melee, a loaded unlicensed local gun he was carrying also accidently went off, hitting his thigh.”

The elephants also injured a 30-year-old named Basil in the chaos as well. He was later admitted to a private hospital in Aluva, a nearby town, where doctors reported his medical condition as serious.

The remaining members of the gang — named Sajith and Anish — then informed friends and relatives about what had happened, and word eventually got to forest officials.

Sajith and Anish then secretly left town in a hurry, officials say. However, police have registered a case against the men under India’s Wildlife Protection Act, 1972. Police were also able to recover the weapons and other hunting equipment from the scene of the crime.

While these men may have been thwarted, poaching of course remains a serious problem.

Recent reports have shown, for example, that poaching is causing an increasing number of African elephants to be born without tusks.

Because poachers only kill elephants with tusks, a population “ends up with a higher proportion of tuskless animals who then reproduce and tend to produce tuskless offspring,” according to Joyce Poole of Elephant Voices. “In this day and age, with all the poaching going on, tuskless elephants are at an advantage because they are not being targeted for their tusks.”

Thus, some now fear that African elephants will end up like their Asian cousins, who are now virtually tuskless.

Still, as the Asian elephants near Thattekad showed the poachers earlier this month, tusks are not what gives an elephant teeth.

Next, read the inside about the (mostly) legal practice of hunting endangered species in Africa, before checking out the infamous lion killer who recently fell 100 feet to his death during a huntr.