The Controversial Legacy Of Hannah Duston, The Colonist Who Killed 10 Native Americans

After being kidnapped by Native Americans in 1697, Hannah Duston brutally killed her captors with a tomahawk — including six children. 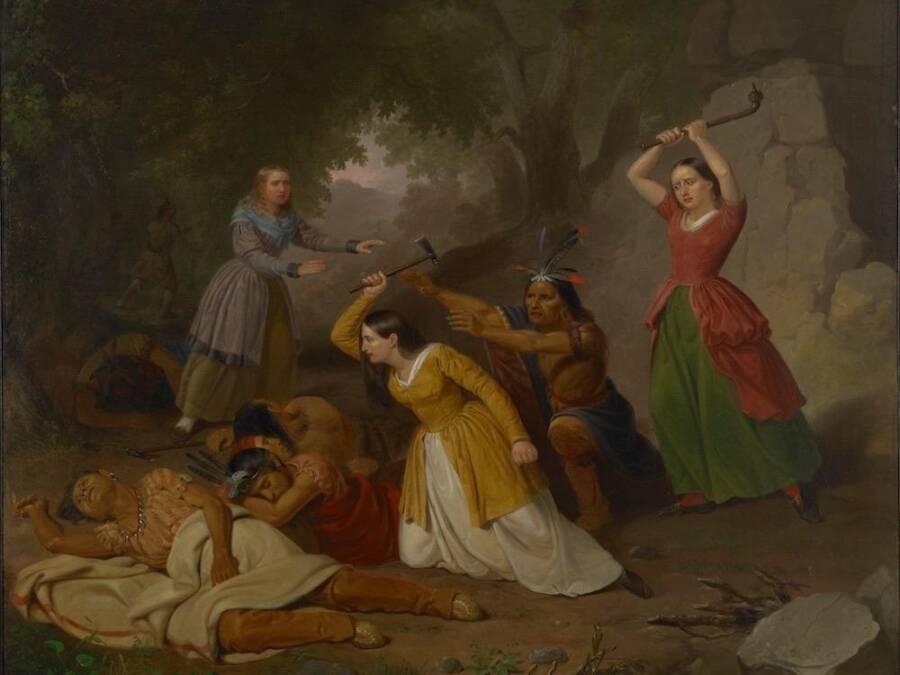 In 1861, a small new England town erected a monument to Hannah Duston — possibly the first in the U.S. to honor a woman. But not everyone thinks Duston was a hero.

Almost 200 years earlier, Duston had been kidnapped by Native Americans from her home in Haverhill, Massachusetts, and placed with a Native American family. In the dead of night, she picked up a tomahawk and bludgeoned six sleeping children and four sleeping adults to death.

Before fleeing, she scalped them.

Since then, her legacy has been largely celebrated. Towns erected statues in her honor — in one, her stone fingers grip a handful of scalps — and her story was heralded as one of bravery. But in recent years, some have reexamined Duston’s tale. Was she really a hero — or a killer?

The Kidnapping of Hannah Duston

Born in 1657 in Haverhill, Massachusetts, Hannah Emerson Duston grew up in a violent time. Colonists like her frequently clashed with Native Americans, who fought against the white settlers’ encroachment into their lands. In 1697, the conflict arrived at her front door. 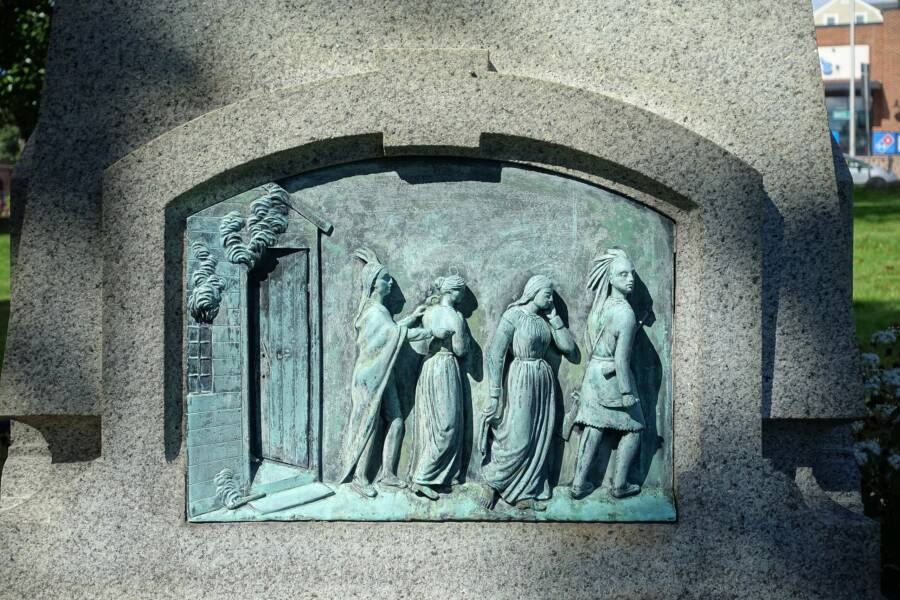 In the throes of King William’s war, Native Americans — likely Abenaki — descended on the town of Haverhill on March 15. There, they killed 27 men, women, and children.

Though Duston’s husband was able to escape with eight of their children, Duston, her newborn daughter, and her nurse, Mary Neff, were taken captive. About 10 other colonists were also kidnapped from Haverhill.

According to the story Duston later told Puritan minister Cotton Mather, her captors promptly killed her baby by dashing “the Brains of the Infant, against a Tree.” She and Neff were then forced to walk for weeks before being placed with a Native American family on an island in the Merrimack River.

There, Duston plotted her escape. Inspired by the Biblical story of Jael and Sisera, Duston gathered her fellow captives — Neff and a boy named Samuel Leonardson — and put her plan into motion. On the night of April 30, she and the others picked up tomahawks left nearby and attacked.

They bludgeoned four adults and six children to death. Duston then scalped their victims — both to provide proof of what had happened and for a reward — and the three captives fled downriver.

They received 50 pounds for the 10 Native American scalps. Six of them were quite small.

For over 100 years, the story of Hannah Duston was slowly forgotten. But starting in the 1820s, writers like Henry David Thoreau and Nathaniel Hawthorne suddenly resurrected her tale. 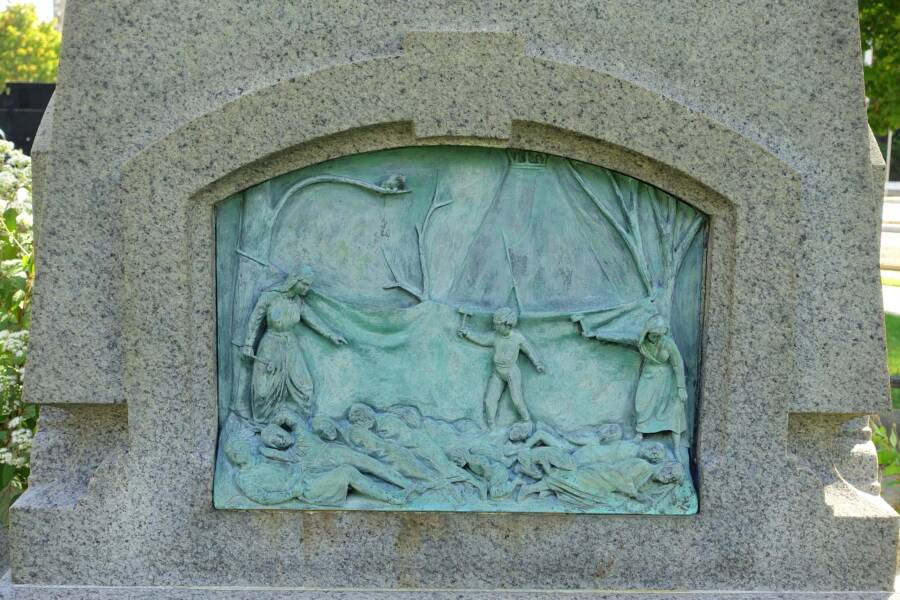 In describing the death of Duston’s infant, Hawthorne wrote in 1834: “In an instant, an Indian seized it by the heels, swung it in the air, dashed out its brains against the trunk of the nearest tree, and threw the little corpse at his mother’s feet.”

Hawthorne added, with foreboding: “Perhaps it was the remembrance of that moment, that hardened Hannah Duston’s heart, when her time for vengeance came.”

But what revived Hannah Duston’s story more than 100 years after it happened? Why did her tale of captivity, and vengeance, suddenly fill history books and children’s books across the United States?

The answer has to do with how Americans interacted with Native Americans. By the 1820s, official policy toward indigenous people had started to shift. Instead of co-existing with tribes and making treaties with them, policymakers had started to tighten their control.

New laws like the 1819 Civilization Fund Act sought to introduce Native Americans to the “arts of civilization.” Meanwhile, the government turned a blind eye as westward settlers snatched up Native American land.

As a result, Native Americans suffered through broken treaties, land loss, relocations, and population decline. And stories like Hannah Duston’s helped justify what was happening.

Stories like hers made the subtle argument that white settlers like Duston — and thus Americans in general — were innocent. And if white settlers were the innocent ones, then the current policy of removing Native Americans from their homes and stamping out their culture could be justified. 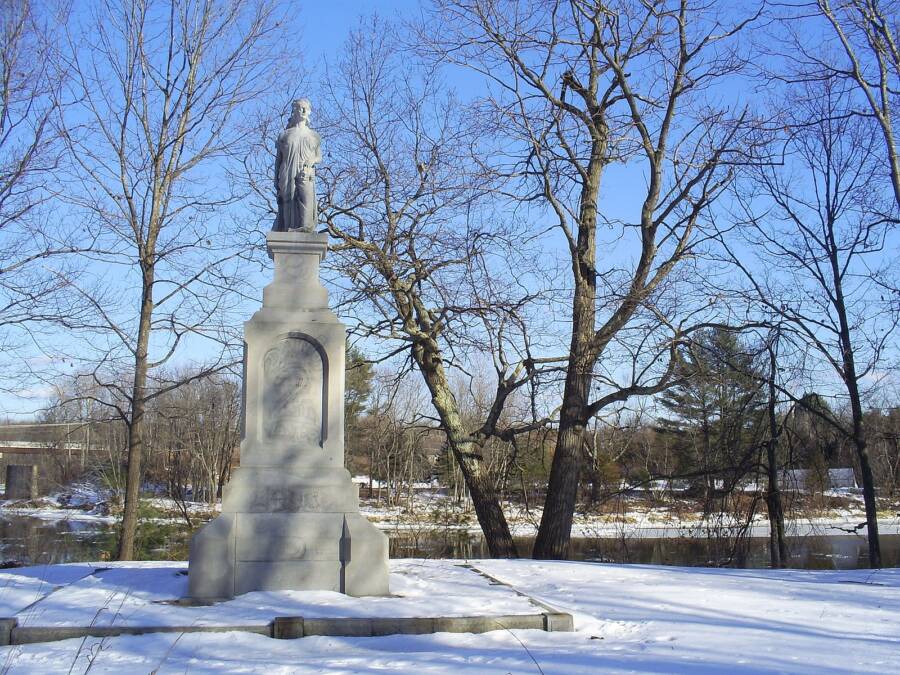 Craig Michaud/Wikimedia CommonsThe statue to Hannah Duston in New Hampshire stands close to the site where she escaped captivity.

Before long, monuments to Hannah Duston started to appear across the northeast, including in Haverhill, in Boscawen, New Hampshire — where Duston had killed the Native Americans — and in Nashua, New Hampshire where Duston, Neff, and Leonardson came across the home of John Lovewell after their escape.

As the 19th-century swung into the 20th, however, many policymakers considered the “Indian problem” solved. Tribes were restricted to reservations; Native American children had been placed in boarding schools to be “assimilated.” And, thus, Hannah Duston’s tale faded back into history.

But Duston’s place in history has received new attention in recent years. Was Hannah Duston a hero? Or a killer? And should her statues come down?

The Debate Over Hannah Duston’s Memory

Ever since statues of Hannah Duston started appearing, some saw them as nothing more than propaganda.

“When we look at that statue of Hannah Dustin… we can hardly help thinking that the whole thing is a farce,” someone complained, in an 1874 editorial in the Newburyport Daily Herald.

But the call to remove statues of Hannah Duston has grown louder in recent years. Just like the debate over Confederate monuments, the Hannah Duston statues represent an important question. What parts of history should be celebrated? Should the nation honor someone who killed 10 people, including six children?

“The propaganda story feeds into the white manifest destiny thing, feeds into the hatred against Native Americans,” Ron Peacetree of the Haverhill Historical Commission told NPR.

The Haverhill statue, he says, represents the town’s racist history. And it gives people license to be racist towards Native Americans like him even today.

“On one hand, as an Indigenous person, we don’t want a statue that honors Hannah,” explained Denise Pouliot, the lead female speaker for the Cowasuck Band of the Pennacook-Abenaki People. “But on the other hand, we need an outlet in order to share the true history of the region.”

Ultimately, the debate over Hannah Duston comes down not to what she did, but how we choose to remember her. Is she someone to celebrate? To honor and admire? Or is she a piece of a much larger — and much more complicated — history?

“I think it’s really more important to think about what people meant when they supported putting up this statue,” Barbara Cutter, a professor of history at the University of Northern Iowa who has written about the Duston statues, pointed out.

“And it wasn’t about [Hannah Duston]. It was about an effort to hide the violence of colonization and imperialism.”

Hannah Duston became a patriotic symbol to 19th-century expansionists. Next, learn about the 500-year genocide of Native Americans and then read about the Trail of Tears.