Researchers are calling the discovery the "largest Viking-Age find of this nature in more than ten years." 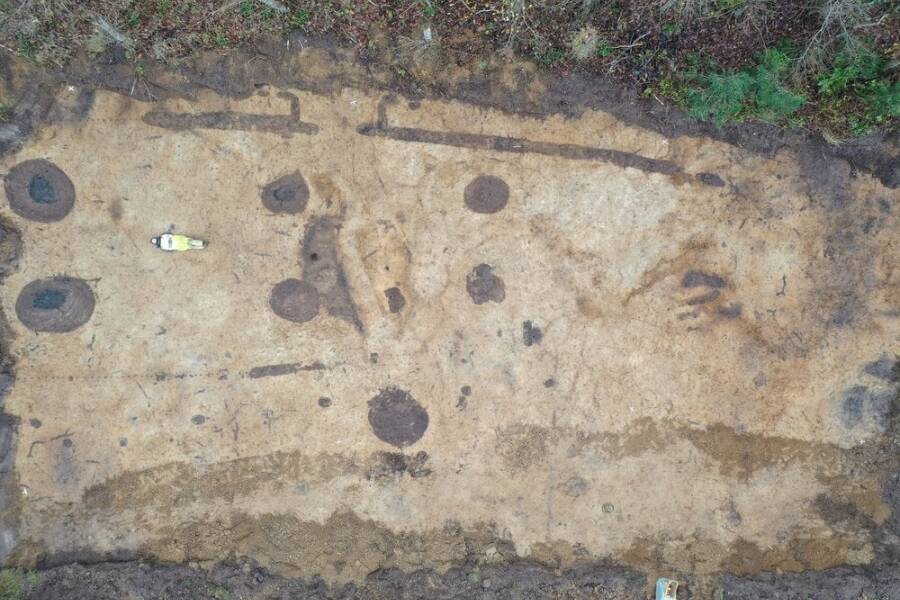 Nordjyske MuseerSo far, the team has only unearthed half of the Viking hall, with plans to uncover the rest later in 2023.

Near the village of Hune in northern Denmark, a team of archaeologists have discovered ruins believed to date back to the Viking Age: a community hall with possible ties to Harald Bluetooth.

As reported by Smithsonian Magazine, the building once measured up to 131 feet long and between 26 and 32 feet wide. When it was still standing, its roof was held up by 10 or 12 oak posts. Researchers believe it was likely a “prestigious building” since it was a fair bit larger than the average house of the era.

Thomas Rune Knudsen, an archaeologist with North Jutland Museums and the excavation leader for this project, said in a statement: “This is the largest Viking Age find of this nature in more than ten years, and we have not seen anything like it before here in North Jutland.”

The statement goes on to say that the hall’s architecture is similar to that found at Harald Blåtand’s ring castles, including those in Fyrkat at Hobro and Aggersborg at Aggersund. Harald Blåtand is more commonly known by his English name, Harald Bluetooth — the modern communication technology gets its name from him. 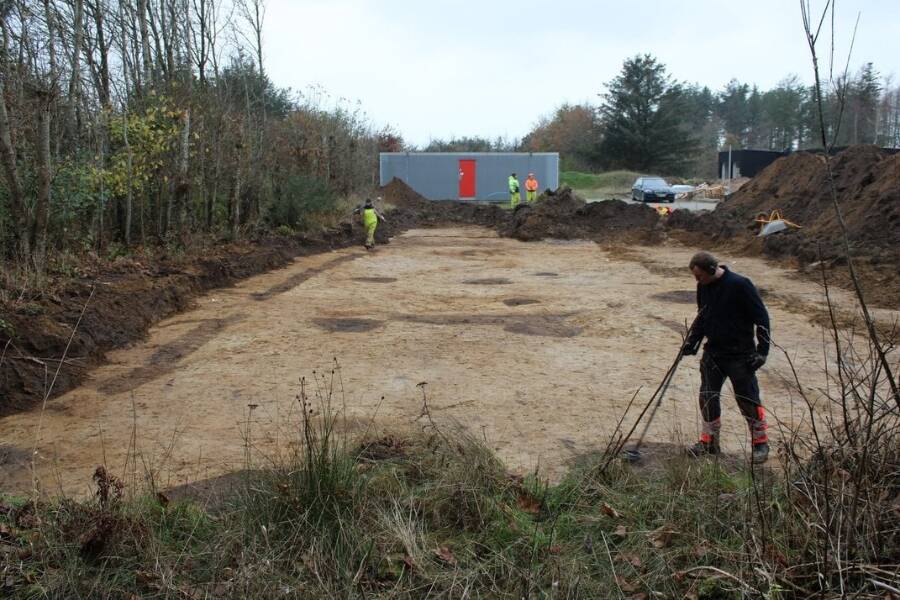 Nordjyske MuseerThe team of archaeologists working at the site of the Viking hall near Hune, Denmark.

“We only had the opportunity to excavate part of the hall, but there are probably several houses hidden under the mulch to the east. A hall building of this nature rarely stands alone,” Knudsen said.

Based on this, Knudsen and the team believe the area may have also once held a farm belonging to a noble or prominent family — and they may even have a clue as to which family it was.

In fact, not far from Hune, archaeologists also found a Viking Age runestone with the inscription, “Hove, Thorkild, Thorbjørn set their father Runulv den Rådnilde’s stone.” They have dated the runestone to between 970 and 1020 C.E., and though they don’t know its initial location, they have ascertained that it originated in the area. 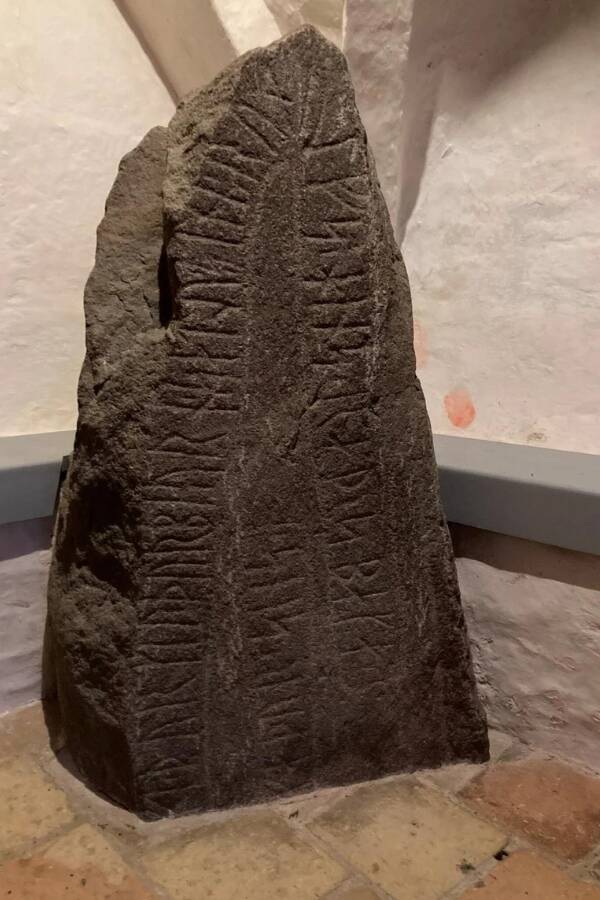 Nordjyske MuseerThe large runestone that was discovered near Hune and potentially offers clues as to who owned the Viking hall.

“It is difficult to prove that the found Viking hall belonged to the family of Runulv den Rådsnilde,” Knudsen said, “but it is certainly a possibility. If nothing else, the runestone and hall represent the same social class and both belong to society’s elite.”

And though the Viking hall discovery may be one of the largest in Denmark within the past decade, it is not the first recent discovery to be linked to Harald Bluetooth.

Back in 2018, an archaeology hobbyist and his 13-year-old pupil discovered a small trove of ancient silver coins that dated back to over 1,000 years ago — 100 of which dated to Bluetooth’s reign.

The cache was “the biggest single discovery of Bluetooth coins in the southern Baltic Sea region,” said lead archaeologist Michael Schirren at the time, adding that the discovery was “of great significance.” 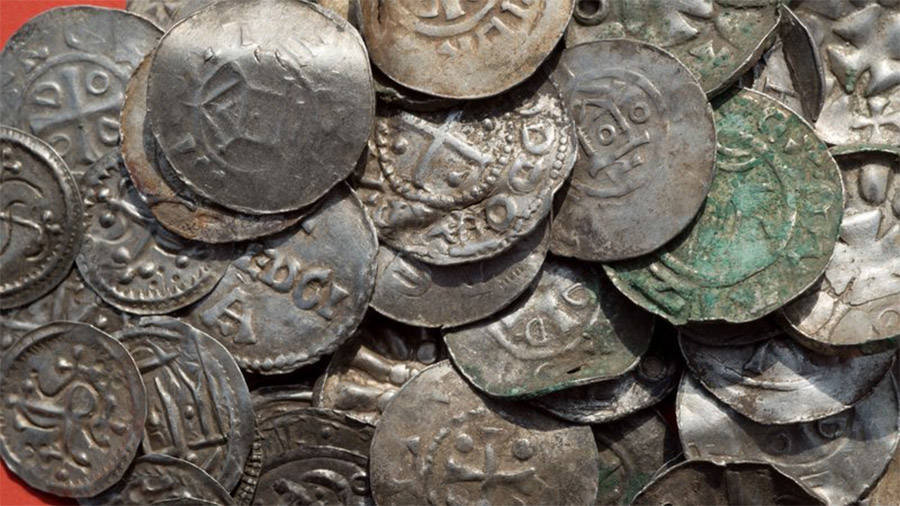 Stefan Sauer/AFP/Getty ImagesA closeup of the silver Viking age coins, the oldest of which, a Damascus dirham, dates back to 714 C.E.

Among his most notable feats, Bluetooth is widely recognized for first bringing Christianity to Denmark and implementing a series of reforms that unified the country under the Danish empire.

Of course, his name is now also largely associated with Bluetooth communication technology — the logo for which is comprised of two Viking runes that represent the king’s initials. The reason for this? Jim Kardach, the engineer of Bluetooth technology, happened to be reading a book about Vikings while he was working on it.

Unfortunately, Bluetooth’s notoriety earned him more than a few enemies, including, it turns out, his own son, who led a rebellion against him and forced him to flee to Pomerania. It’s likely that the coins were buried during this time.

So far, Knudsen and his team have only uncovered about half of the Viking hall near Hune, but they have plans to unearth the remainder of it sometime this year. In doing so, it’s possible that they could unlock even more details about Harald Bluetooth’s reign and the lives of his subjects.

After reading about this remarkable discovery, learn about the 1,100-year-old Viking drinking hall that was discovered in Scotland. Then, read about the ancient settlement discovered in Iceland that changed archaeologists’ understanding of Viking history.