Inside The Wild Life And Mysterious Death Of James Callender, The Original American Scandalmonger

James Callender published exposés on founding fathers like Alexander Hamilton and publicized reports of Thomas Jefferson's rape of the enslaved Sally Hemings — then he drowned under mysterious circumstances.

Early American history was rife with political scandals. Alexander Hamilton had an affair with a woman named Maria Reynolds, then tried to pay her husband hush money. Thomas Jefferson slept with an enslaved woman named Sally Hemings, who bore him several children. These stories, and more, were all first publicized by one person: James Callender.

A Scotsman who came to America fleeing political persecution, Callender wasted no time in making powerful friends and sniffing out political secrets. In an era where politicians fought in the press, Callender was well-suited to attack his allies’ enemies with bombastic claims in newspapers.

He didn’t always write the truth. Sometimes Callender made wildly absurd claims. But when he attacked, Callender aimed to kill. He revealed Hamilton’s affair with Reynolds while allied with Jefferson, and attempted to shred Jefferson’s reputation to bits after Jefferson abandoned him.

In his life, James Callender made few friends and many enemies. He died alone, apparently drunk enough to drown in shallow water, and was swiftly made into a footnote of American history. But he played a crucial role in the country’s early days, holding a flame to the dry timber of political rivalries.

Little is known about James Callender’s early life. Born around 1758 in Scotland, he referred to himself as an “orphan bard,” suggesting he’d lost his parents at a young age, per With the Hammer of Truth by Michael Durey.

Nevertheless, Callender swiftly set out to make a name for himself. In 1782, he wrote Deformities of Dr. Samuel Johnson, a piece critical of the famous English writer. Ten years later, Callender penned the even more scandalous Political Progress of Britain, in which he critiqued British institutions, including the monarchy, and made a case for Scottish nationalism.

As Slate notes, Callender wasn’t able to get away with calling the English government a “mass of legislative putrefaction.” After an interrogation, Callender was forced to go into hiding in Ireland to avoid arrest.

In the spring of 1793, James Callender decided to flee Great Britain for good. He set sail for the United States, where he was confident that he’d be able to write what he pleased without persecution.

“It was the happy privilege of an American that he may prattle and print in what way he pleases,” Callender declared, according to Slate, “and without anyone to make him afraid.”

James Callender certainly did seem fearless. Not long after he arrived in the United States in May 1793, he secured a job as a congressional reporter with the Philadelphia Gazette. Between 1794 and 1798, he also started contributing blistering anonymous attacks on Federalist politicians to the Philadelphia Aurora.

Siding with the Democratic-Republicans, who shared his distrust of England, Callender audaciously attacked Federalists like George Washington, Alexander Hamilton, and John Adams in print. 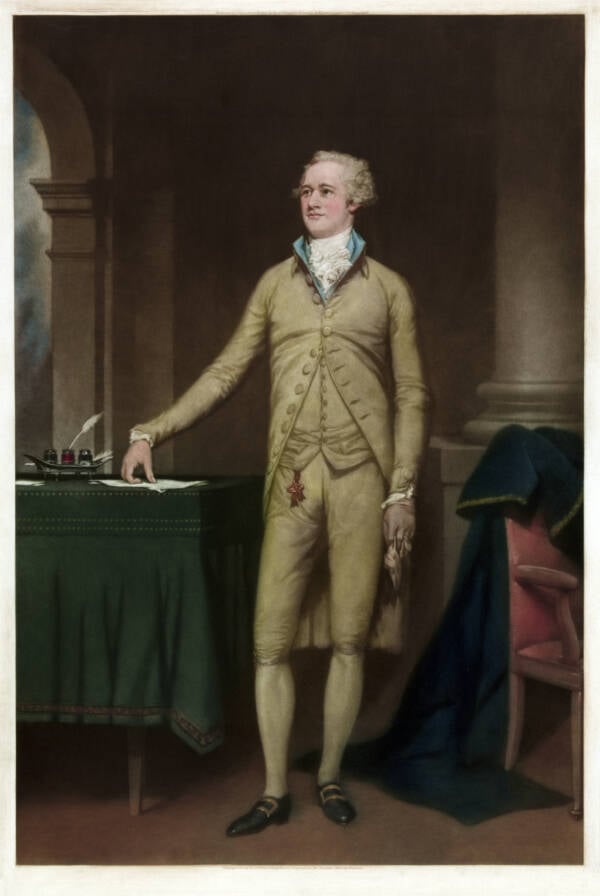 That same year, Callender caught wind of a rumor that Alexander Hamilton, Washington’s Secretary of the Treasury, had had an affair with a woman named Maria Reynolds. He was given evidence of the affair by a source — possibly an ally of Thomas Jefferson’s, who had a well-known dislike for Hamilton — and published it in the History of the United States for 1796.

“This great master of morality,” Callender sneered, according to Slate, “though himself the father of a family, confess[ed] that he had an illicit correspondence with another man’s wife.”

Callender, who by then was being paid by Jefferson and his allies, soon turned his venom on the president, John Adams. In 1800, as Adams faced Jefferson in a tough reelection race, Callender gleefully disparaged the president in his volume, The Prospects before Us. 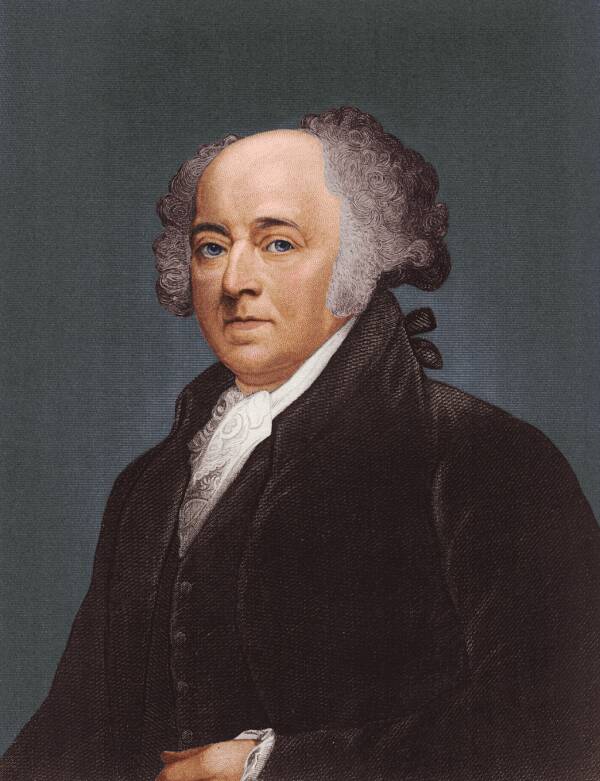 PBS reports that Callender called Adams a “mentally deranged” monarchist who schemed to place his own son, John Quincy, in power. Callender also called the president a “hideous hermaphroditical character, which has neither the force of a man, nor the gentleness and sensibility of a woman.”

Callender’s scathing attack violated the Alien and Sedition Act — the much-hated law that limited freedom of speech, especially when it was critical toward the president — and got him thrown in jail. But it worked. Adams lost reelection. Callender’s patron, Jefferson, became president.

“Hurraw!” Callender exclaimed, per Slate. “How shall I triumph over the miscreants! How, as Othello says, shall they be damned beyond all depth!”

But James Callender was badly mistaken. As president, Jefferson would distance himself from the scandalous journalist — and he would pay a price.

How James Callender Tried To Take Down Thomas Jefferson 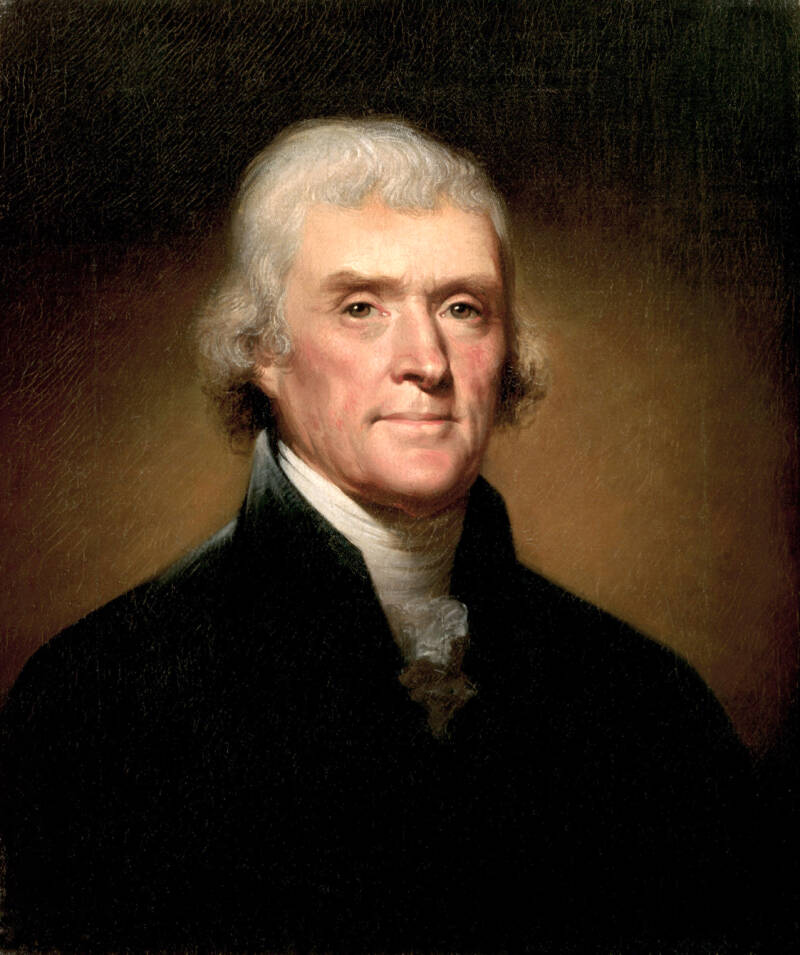 VCG Wilson/Corbis via Getty ImagesAfter becoming president in the election of 1800, Thomas Jefferson tried to wash his hands of James Callender.

When Thomas Jefferson became president, he pardoned James Callender and others who’d served time as a result of the Alien and Sedition Act. But Callender wanted more — he wanted a reward.

As PBS writes, Callender specifically wanted Jefferson to pay back the $200 fine that Callender had been forced to fork over. And he wanted the president to make him the postmaster of Richmond. Jefferson, however, refused. Instead, he sent a third party to Callender with a $50 payment.

“By the cause, I have lost five years of labor; gained five thousand enemies; got my name inserted in five hundred libels,” Callender fumed in a letter to Jefferson which received no reply. He also met with Jefferson’s ally James Madison, who refused Callender’s financial requests. 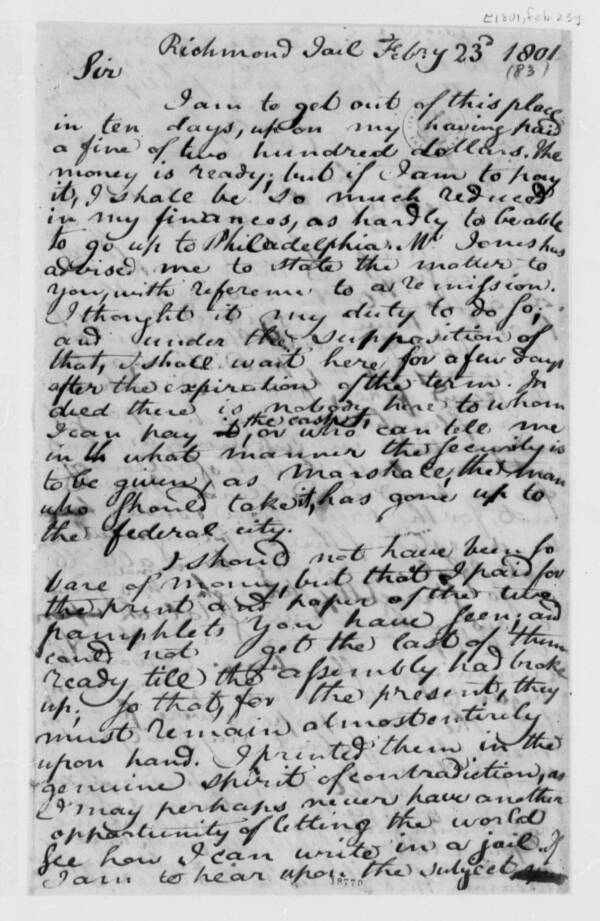 Library of CongressOne of James Callender’s letters to Thomas Jefferson from February 1801, shortly before Jefferson was sworn in as president.

“The money was refused with cold disdain, which is quite as provoking as direct insolence,” Callender wrote sneeringly of that meeting. “Little Madison … exerted a great deal of eloquence to show that it would be improper to repay the money at Washington.”

So, James Callender decided to go nuclear. As History Collection writes, he switched sides and started writing for a Federalist paper called the Recorder. There, Callender declared that Jefferson had paid him during the 1800 campaign and quoted from Jefferson’s letters. (Jefferson admitted he’d given Callender money, but claimed it had been out of charity.)

Enraged, Callender tried to land a death blow. On Sept. 1, 1802, he published an article in the Recorder which accused Jefferson of having children with an enslaved woman named Sally Hemings. 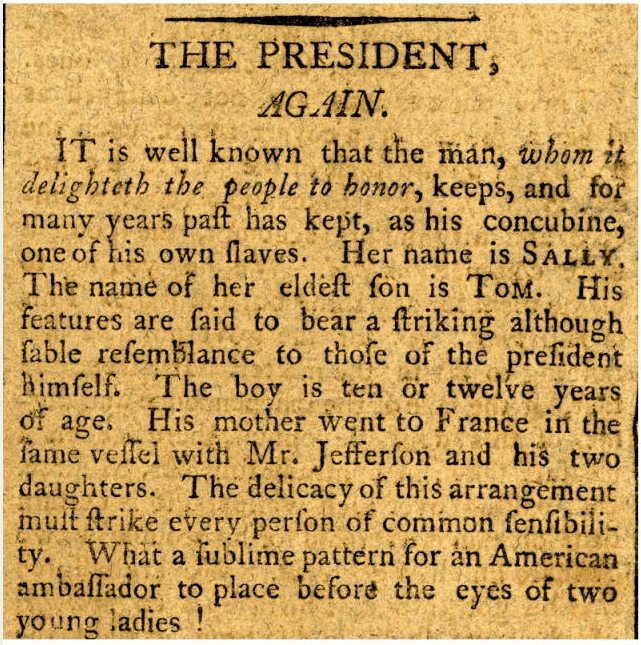 Public DomainJames Callender was the first to publicly accuse Jefferson of having children with Hemings.

“It is well known that the man, whom it delighteth the people to honor, keeps, and for many years past has kept, as his concubine, one of his own slaves. Her name is Sally,” Callender wrote in the explosive article, claiming that the president had had “several children by her.”

Callender ended his article by making his motives clear. “When Mr. Jefferson has read this article, he will find leisure to estimate how much has been lost and gained by so many unprovoked attacks upon J. T. Callender.”

James Callender hoped to destroy Thomas Jefferson’s political prospects, as he had with Hamilton and Adams. But in the end, few believed Callender’s accusations. And Jefferson’s presidency would outlive Callender himself.

The Drowning Death Of A Political Scandalmonger

Though his explosive articles had captivated the United States, James Callender’s death came with a whimper. On July 17, 1803 — less than a year after his Jefferson exposé — Callender was observed wandering around drunk, according to With the Hammer of Truth.

Soon afterward, Callender’s body was found on the banks of Virginia’s James River. He was found in shallow water and though a doctor tried to save him “all his efforts proved ineffectual.” It was determined that Callender had drowned while drunk, and he was buried the same day. 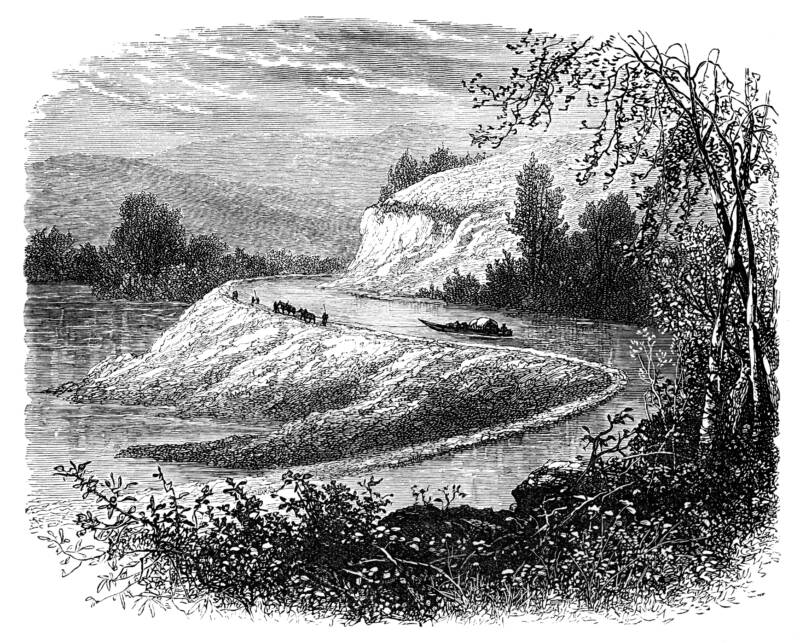 With that, James Callender became a quirk of early American history. But in recent decades, Callender’s memory has been revived. In 1998, his accusations against Jefferson were proven to be true when a DNA test determined that the president had, in fact, had children with Hemings.

He may be seen as a footnote — a small man next to the political giants of George Washington and Thomas Jefferson — but James Callender played an important role in the early days of the United States. Though often motivated by politics and payments, he also envisioned a country where a free press could hold politicians accountable. Today, that model stands.

“The more that a nation knows about the mode of conducting its business,” James Thomson Callender wrote in 1796, “the better chance has that business of being properly conducted.”

After reading about the life and death of James Callender, look through these nine presidential sex scandals, from Thomas Jefferson to Donald Trump. Or, discover something new about American history with these surprising facts about the Founding Fathers.