In January 1511, the birth of Prince Henry Tudor, Duke of Cornwall, was celebrated with lavish pageants and feasts — but just 52 days later, a mysterious illness took his life. 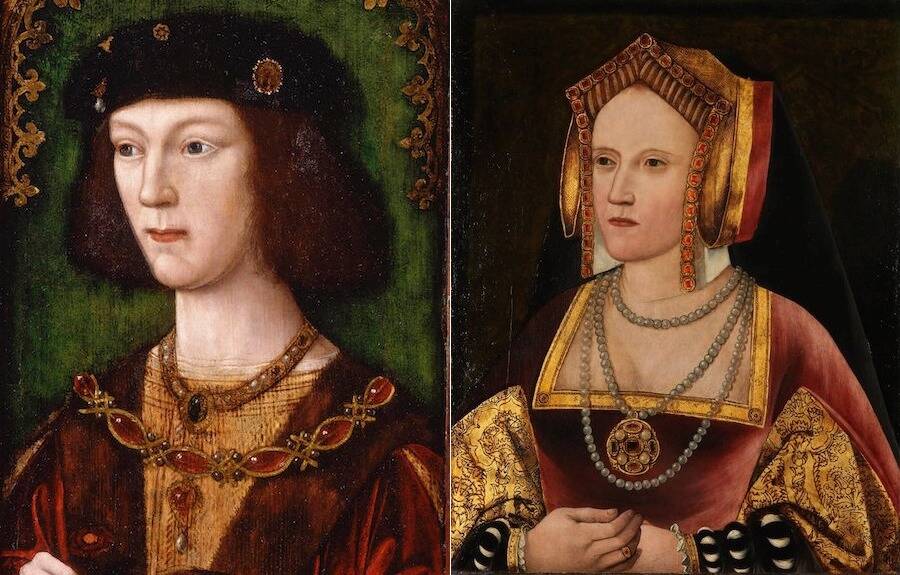 Henry, Duke of Cornwall, lived a brief life, dying just 52 days after birth. But as the son of King Henry VIII of England and his first wife, Catherine of Aragon, his impact on English history could not have been more significant.

When Henry was born, King Henry VIII was so proud that he opened his palace to the public and rode in tournaments wearing his wife’s initial emblazoned on his horse. He sang and drank with his people and planned extravagant celebrations that rivaled his own coronation — then tragedy hit.

Catherine was particularly devastated, as she had failed to produce a healthy male heir before. Her first marriage to Prince Arthur in 1501 ended with his death in 1502. Catherine married his young brother King Henry VIII in 1509 and was fully aware of what was expected — a healthy line of succession.

Some historians believe Henry, Duke of Cornwall, died from sudden infant death syndrome. Others suggest a common cold. Indifferent to the reason, King Henry VIII would demand a divorce from the mother of his dead son. The act was so unorthodox at the time that it led to the English Reformation and a permanent schism with the Catholic Church in Rome.

The Short Life Of Henry, Duke Of Cornwall

Henry, Duke of Cornwall, was born on Jan. 1, 1511, at Richmond Palace, nine miles southeast of London, and took his first breath surrounded by the luxury of a future he was to inherit. For King Henry VIII, the child was everything he had hoped for: male, healthy, and alive. For Catherine of Aragon, things hadn’t been as easy.

The 26-year-old queen had already lived quite a turbulent life. Betrothed to Henry’s brother, Prince Arthur, when she was 15 years old, she had become Princess of Wales on Nov. 14, 1501, only for an illness to kill her husband within months. 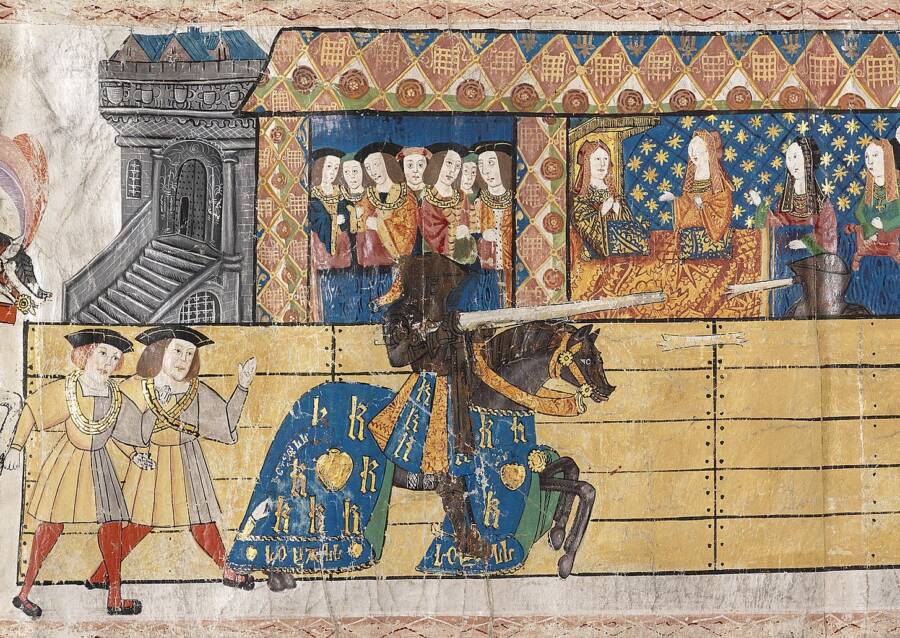 Wikimedia CommonsKing Henry VIII jousting in honor of his wife and their newborn son, Henry Duke of Cornwall.

Hoping to avoid returning her 200-ducat dowry, King Henry VII suggested she marry his other son. But arrangements would have to wait, since the new heir was still just a boy.

Finally, after an eight-year engagement, King Henry VII died on April 21, 1509, and Henry, now King Henry VIII, was 17 years old. He announced his intentions to marry Catherine after his father’s burial on May 10. They were married in a small, private ceremony just 32 days later, on June 11.

That November, King Henry VIII wrote Catherine’s parents a letter announcing she was pregnant with his child. However, Catherine would tragically deliver it prematurely and birthed a stillborn daughter on Jan. 31, 1510. But four months later, she was pregnant again.

The public dubbed Henry, Duke of Cornwall, the “New Year’s Boy” and “Little Prince Hal.” He was christened by the Archbishop of Canterbury in an extravagant ceremony on Jan. 5, 1511. His father rode in lavish games as “Sir Loyal Heart” to celebrate, lit beacons in his son’s honor, and even let petty thieves out of jail.

With godparents like King Louis XII of France and Marguerite of Austria, Henry, Duke of Cornwall, was already in historic company. He was to become the Prince of Wales and then reign as King of England, but the nation’s celebrations were tragically premature. The young prince died on Feb. 22, too young for even a portrait to have been commissioned.

The Lack Of An Heir And England’s Reformation

Henry, Duke of Cornwall, was given a prince’s funeral. His parents were in too much shock to attend and sent courtiers in their place. Henry, Duke of Cornwall’s tiny body was placed in a coffin and carried from Richmond Palace to the Thames, where black barges carried it downriver to be buried at Westminster Abbey.

Catherine spent most of her days in prayer to cope with the loss, but she and her husband were still very much in love. Their joy returned when she became pregnant, but it vanished when she had a stillborn boy in 1513 — and again in 1514. While she bore a healthy daughter in 1516, the king’s frustrations grew rampant.

The Tudor dynasty hung in the balance without a male heir, leading King Henry VIII to unfaithfully look elsewhere. He charmed many mistresses, but none compared to Anne Boleyn. A lady-in-waiting to the queen, she had become the king’s most sought-after prospect by 1525 — and saw him ask for a divorce from Catherine. 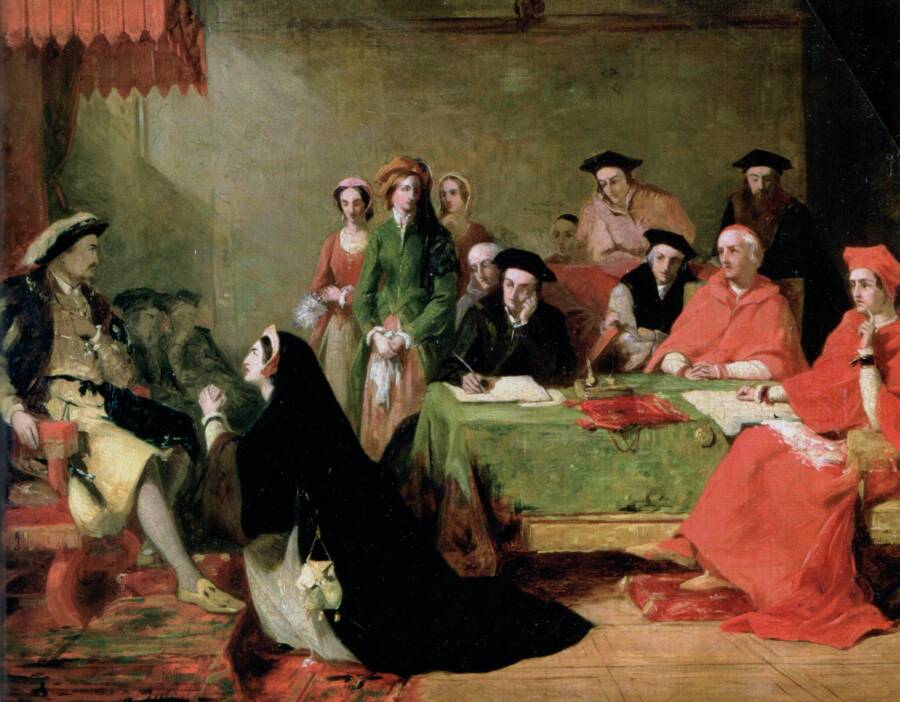 Wikimedia CommonsCatherine of Aragon pleading her case against divorce.

King Henry VIII asked Pope Clement VII to grant him this by arguing that his marriage was cursed. He either believed or claimed to believe that the union had been against God’s will, as evident by Catherine’s previous marriage to his late brother. To him, her repeated failure to produce a male heir only reinforced that theory.

While the Pope would have likely granted him the favor, the king’s request in 1527 came at a difficult time. Troops of the Holy Roman Empire had attacked Rome and forced the Pope to flee. And because the Holy Roman Emperor was Catherine of Aragon’s own nephew, Clement VII was hesitant to grant her husband a divorce.

The king thus had his Protestant adviser Thomas Cromwell and clergyman Thomas Cranmer argue that the Pope had no jurisdiction over the crown. By the time he married Anne Boleyn in June 1533 and made her queen, she was already pregnant — but would ultimately only provide the king with a daughter, Queen Elizabeth I.

Henry Duke of Cornwall’s death, meanwhile, changed history forever. Ties with Rome were irreparably cut in 1534, making King Henry VIII the Supreme Head of the Church of England. He dissolved Catholic monasteries and took control of vast Church holdings — sparking the reformation of a once-Catholic nation into a Protestant one.

After learning about Henry, Duke of Cornwall, read about about the many wives of King Henry VIII. Then, learn about the short life of Tatiana Romanov, the daughter of Russia’s last Tsar.