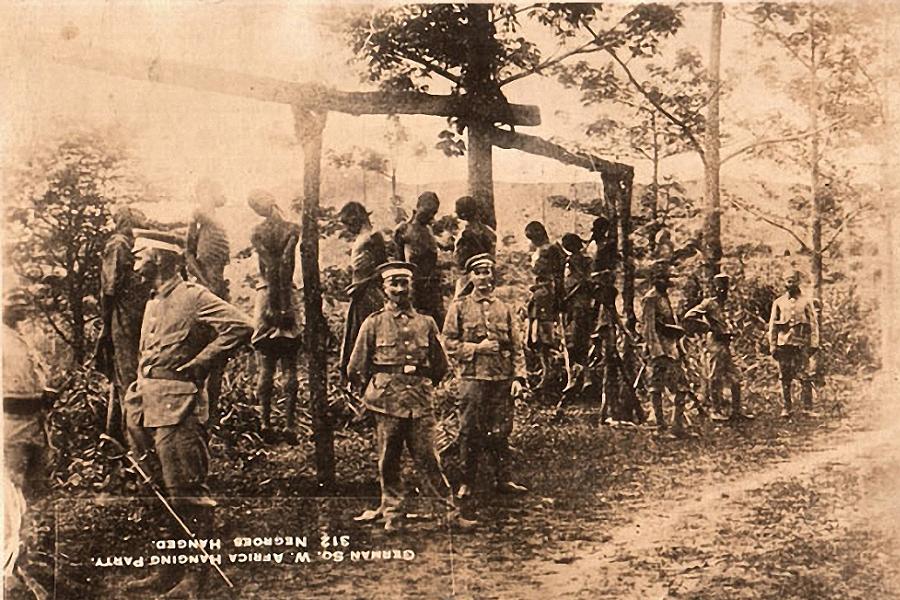 South African HistoryA German “hanging party” during the Herero genocide. The caption explains that 312 Herero were killed during the festivities.

Returning in triumph from Waterberg, von Trotha reinforced his garrison to 10,000 men and issued the following orders on October 2, 1904:

“All the Herero must leave the land. If they refuse, then I will force them to do it with the big guns. Any Herero found within German borders, with or without a gun, will be shot. No prisoners will be taken. This is my decision for the Herero people.”

Immediately after this proclamation, Germans seized all Herero lands and transferred all cattle to German ranchers. They drove the 50,000 remaining Herero into the wilderness, where they had them starved, shot at, and enslaved. They forced tens of thousands of Nama, whose tribe had also been hostile to the Germans, into the Germans’ new concentration camps.

There, beatings and rapes were a daily ordeal for the internees, who could be executed for any reason at all or at a guard’s whim. Raping the natives was officially frowned upon, but mixed-race children continued to be born in the camps.

German pathologists took an interest in this and descended on the camps to “prove” their racial theories with cognitive tests and grisly medical experiments that included dissection of freshly killed inmates.

Unsurprisingly, they “discovered” that the children of mixed blood were vastly superior to native Herero and Nama tribesmen, but still inferior to pure-white German children. Their findings made for several popular books on eugenics back in Europe, one of which, The Principles of Human Heredity and Race Hygiene, by Eugen Fischer, would later be read by Adolf Hitler during his 1923-25 prison term. 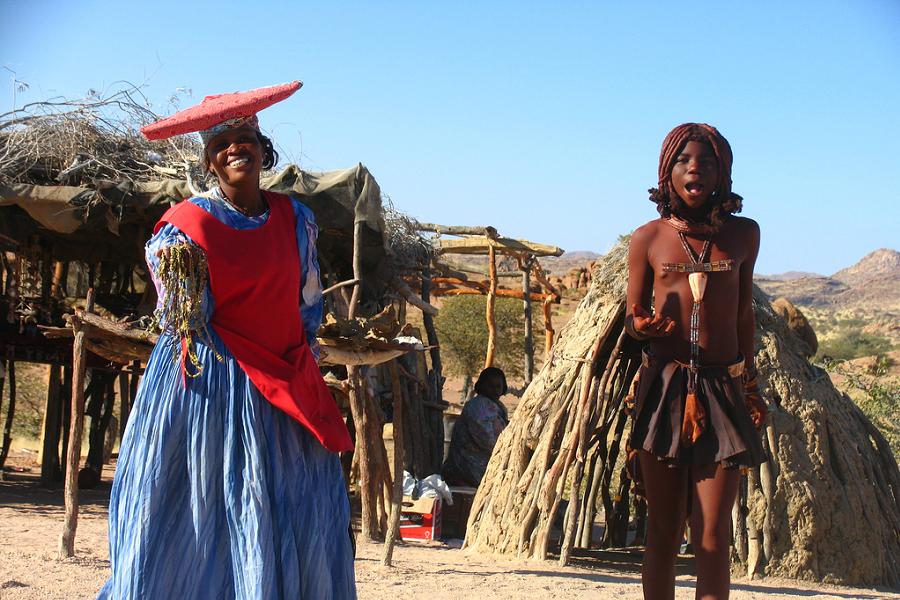 Flickr/SalymfayadA Herero woman poses next to an unmarried girl of the nearby Himba tribe in traditional dress.

All of the good land in the country fell into German hands until after World War I, when the colony was awarded to the British. South Africa would continuously occupy the land until 1990.

Unsurprisingly, the white government of South Africa was in no hurry to acknowledge the Herero genocide. Facing their own racial problems back home, the colonial British authorities, and later the Afrikaner National Party, prevented investigation and discussion of the Herero genocide of 1904-07, and only started taking the matter seriously long after most of the firsthand witnesses were long dead.

This is just one of the many problems with getting a final reckoning for the Herero genocide. Germany has been through several changes of government since 1907, so it’s doubtful whether anyone in Europe can be held accountable for what happened to the Herero.

Descendants of the Herero genocide’s survivors now live on barren, crowded land, squeezed there by the favored tribes that weren’t herded into the camps. Those tribes, predominantly the Ovambo, have never been sympathetic to the Herero or the Nama, and so any settlement money that the Namibian government negotiates for is likely to be paid out among the very tribes that collaborated with the Germans, rather than to the descendants of the victims.

Finally, Namibia’s chief foreign-currency earner is German aid, which gives the government in the Namibian capital of Windhoek virtually no leverage in negotiations, even if it was serious about reparations for the Herero genocide in the first place.

Meanwhile, the modern Herero and Nama people scratch out a living in the veld, herding what cattle they have, farming where it’s possible, and half-subsisting on Namibia’s almost nonexistent social welfare programs. There seems to be no end in sight.

Atrocities like the Herero genocide aren’t isolated. Genocides have also taken place in the Congo as well as early 20th century Armenia.