Days after learning his family had been shipped off to a refugee camp beside 12,000 other Jews, 17-year-old Herschel Grynszpan bought a gun and snuck into the German embassy in Paris.

Herschel Grynszpan was just an angry teenager in a desperate situation, but his one act of violence in 1938 instigated the night largely believed to mark the start of the Holocaust.

When Grynszpan killed German diplomat Ernst vom Rath in Paris on November 7, 1938, the Nazis used this young Jewish man’s act of fury as an excuse to unleash their own brand of brutality. Two days later, the Nazis instigated the nationwide pogrom against Germany’s Jews known as Kristallnacht. The attacks ended with some 7,000 Jewish businesses destroyed and about 30,000 Jewish men sent to concentration camps. 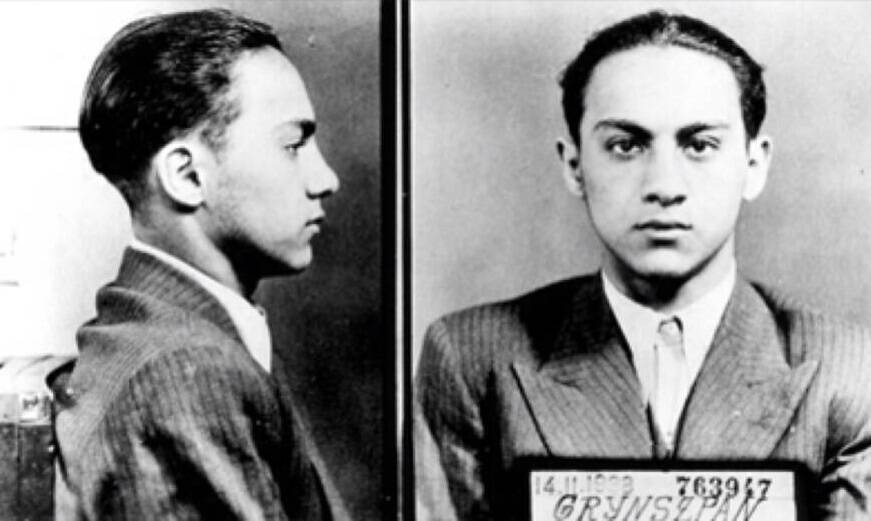 Police photoThe booking photo of Herschel Grynszpan taken after he was arrested for killing German diplomat Ernst vom Rath in Paris on November 7, 1938, which set off the Nazis’ Kristallnacht pogrom against Germany’s Jews several days later.

But as for Herschel Grynszpan, the 17-year-old whose crime set the wheels of history in motion, his fate remains largely shrouded in mystery. This is his tragic story.

Herschel Feibel Grynszpan maintained that all he ever wanted to be was an avenger for his people.

He was born in Hanover, Germany, to a family of what were then called Ostjuden or “Eastern Jews.” They were working-class people with limited education and suffered as much scorn from Western European Jews as they did from anti-Semites.

His parents, Zindel and Rivka, fled Radomsko, Poland in 1911, partly because Germany was seen as more enlightened in its treatment of Jews at the time. 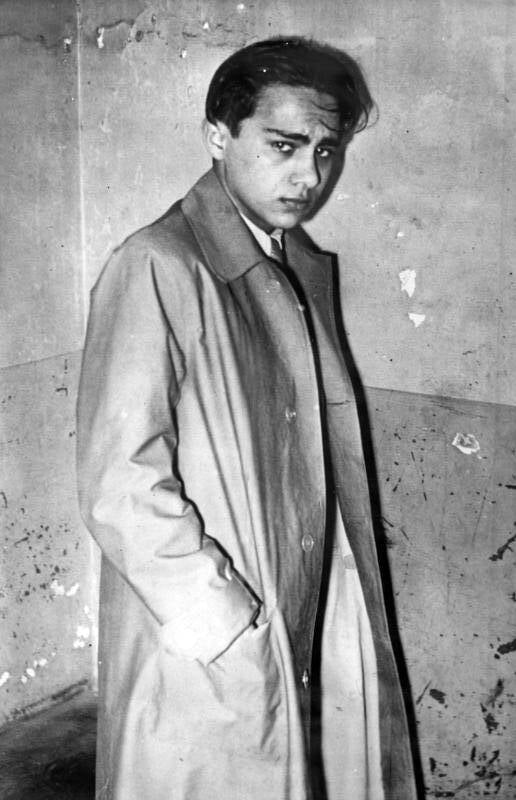 Wikimedia CommonsSoon after Herschel Grynszpan was arrested in France, his case sent shock waves through Germany.

Herschel Grynszpan was a scrawny boy, he had a hair-trigger temper, and was frequently suspended from school for his many fights. He never did well at school nor had he any particular talent for a trade, but he had a quick mind and a good eye for people.

The Weimar Republic he was born into died with the rise of the Nazi Party in 1933, and after struggling under the oppressive regime for several years, Grynszpan, with the support of his parents, made the first fateful decision of his life: to flee to Paris. 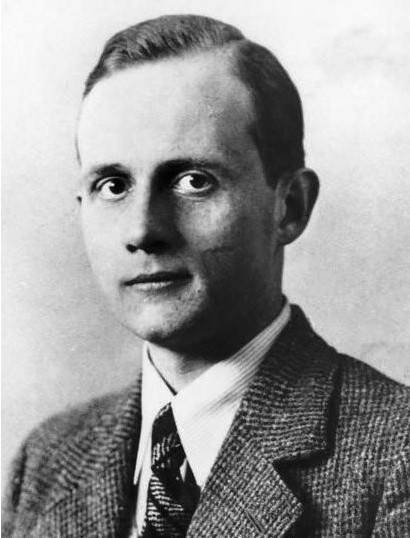 After traveling for several months through Belgium and the Netherlands, Grynszpan crossed the French border in 1936 and joined his uncle Abraham in Paris. Before long, he’d made it clear that he had no interest in his uncle’s trade as a tailor and instead had a keen appetite for the bars, cafes, and warm streets of the French capital.

But while he was enjoying his youth in Paris, his family in Hanover suffered daily at the hands of the Nazis. In 1938, his parents and siblings, along with 12,000 others Jews residing in Germany, were force-marched to a refugee camp in Poland with inadequate food and sanitation. Grynszpan could only watch, helpless, from abroad.

His parents allegedly wrote to him pleading for help and then one November night, the 17-year-old purchased a five-shot revolver for 245 francs. The next day he went to Paris’ German Embassy, his intentions known only to himself.

Desperate to avenge his family, Grynszpan calmly approached the reception desk and asked to speak to a member of the embassy about a secret document of great value that he was prepared to divulge. He was shown to the office of Ernst vom Rath, a 29-year old diplomat. As soon as vom Rath asked to see his secret document, Grynszpan stood and reportedly said:

“You are a dirty boche [slur for Germans] and in the name of twelve thousand persecuted Jews, here is the document!”

With that, he fired all five bullets at vom Rath, striking him twice. The gun’s price tag was still dangling from the trigger. 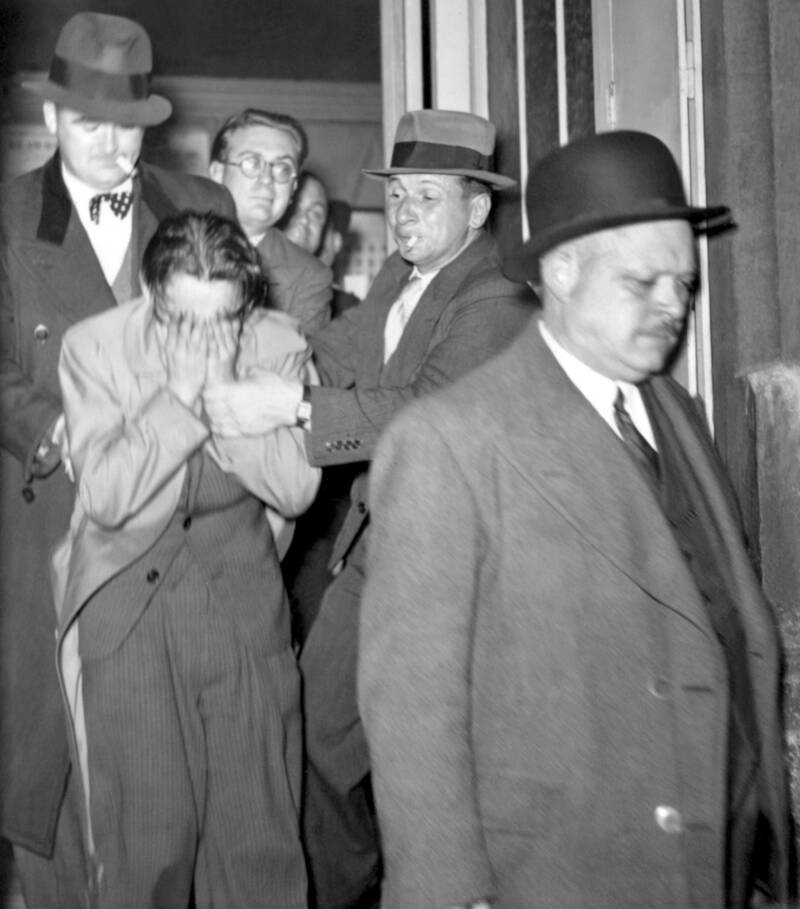 AFP via Getty ImagesHerschel Grynszpan covers his face while escorted by policemen to court in Paris.

To this day, no one knows exactly why Herschel Grynszpan chose to shoot Ernst vom Rath, who was clinging to life following the incident. The young man was undoubtedly frustrated with the Nazis’ abuse of his family and his people, and he went to the embassy looking for the most senior person he could find to take vengeance upon them. He’d actually unknowingly walked by the embassy’s most senior official on his way into the building, but the man was on his way out and was spared the fate vom Rath ended up suffering instead.

French police promptly arrested Grynszpan and interviewed him while vom Rath was hospitalized. The fact that he was still alive was the only thing keeping Grynszpan from a murder charge.

In Berlin, Adolf Hitler and his inner circle quickly found a way to take advantage of the incident. Hitler even sent his personal physician to Paris to treat the wounded diplomat. Every detail of the incident’s fallout was recorded and stored for propaganda value.

On the night of November 9, vom Rath died of his wounds and the Nazis’ brutal response came quickly thereafter. The systematic hatred and humiliation to which the Nazis had subjected German Jews reached new heights almost immediately.

In Munich, Nazi propaganda minister Joseph Goebbels gave a venomous speech in which he blamed all European Jews for the murder. Then, the Nazis initiated a plan for a mass attack on Jewish homes, businesses, and social spaces throughout Germany. 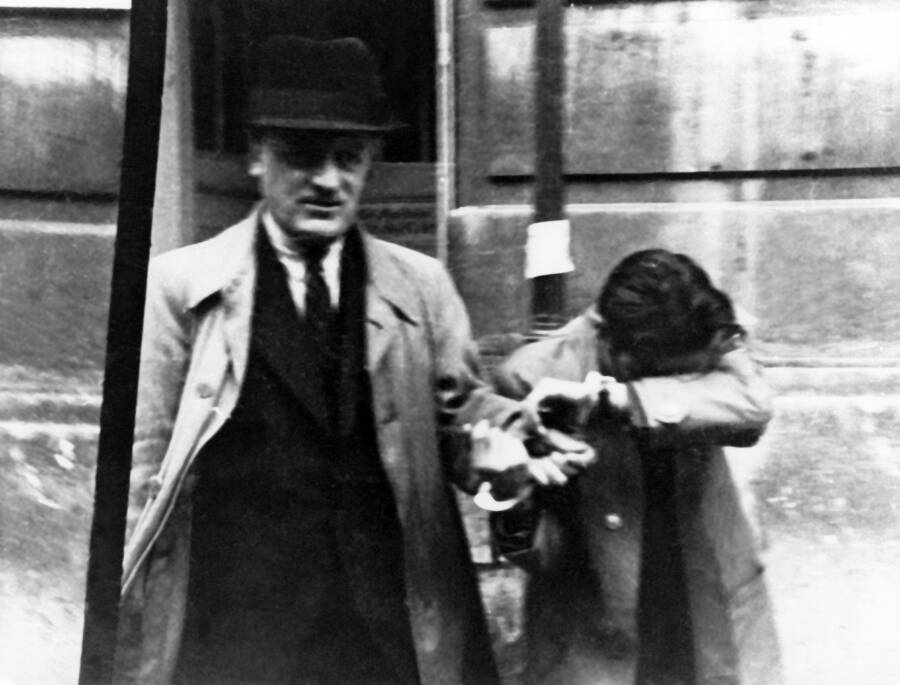 ullstein bild/ullstein bild via Getty ImagesHerschel Grynszpan disappeared from the historical record in 1942 and his fate remains uncertain.

Nazi leaders were already looking for any excuse to strip Germany’s Jews of their rights, freedoms, livelihoods, and even their lives. Grynszpan’s act had only revealed the thinly-veiled face of Nazi violence.

From November 9 until the next day, untold numbers of Jews died or were murdered by rioting gangs of anti-Semites, about 7,000 Jewish businesses and synagogues were damaged or destroyed, and 30,000 Jewish men were deported to concentration camps.

Those violent 24 hours became known as Kristallnacht, “the night of broken glass” and the widely-recognized opening salvo of the Holocaust. 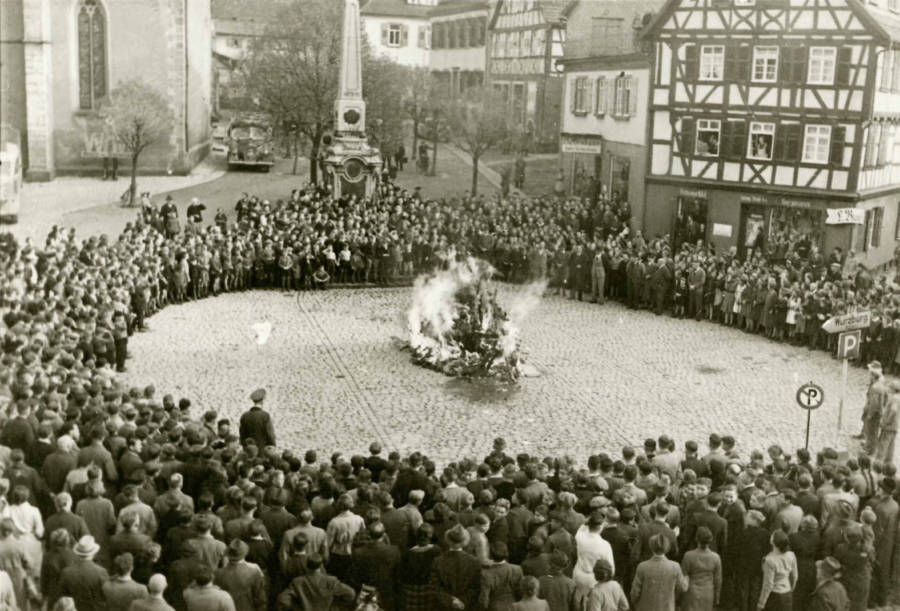 Fine Art Images/Heritage Images/Getty ImagesThe furnishings and ritual objects from the synagogue in Mosbach burn in the town square during Kristallnacht.

Meanwhile, in Paris, Herschel Grynszpan received a legal defense fund from American journalist Dorothy Thompson while he awaited trial. His legal team was headed by famed Corsican lawyer Vincent de Moro-Giafferi, who was widely considered a brilliant attorney and orator in his time.

However, the Nazis published hateful pamphlets and the French courts dragged their feet while Grynszpan faced the ire of Germans both Jewish and non-Jewish alike.

Moro-Giafferi proposed that they frame the case as a crime of passion. Besides Jews, the Nazis also hated homosexuals, and if Grynszpan were to claim that vom Rath had been an unfaithful lover of his, then the Germans would feel compelled to throw out the case to avoid the humiliation. 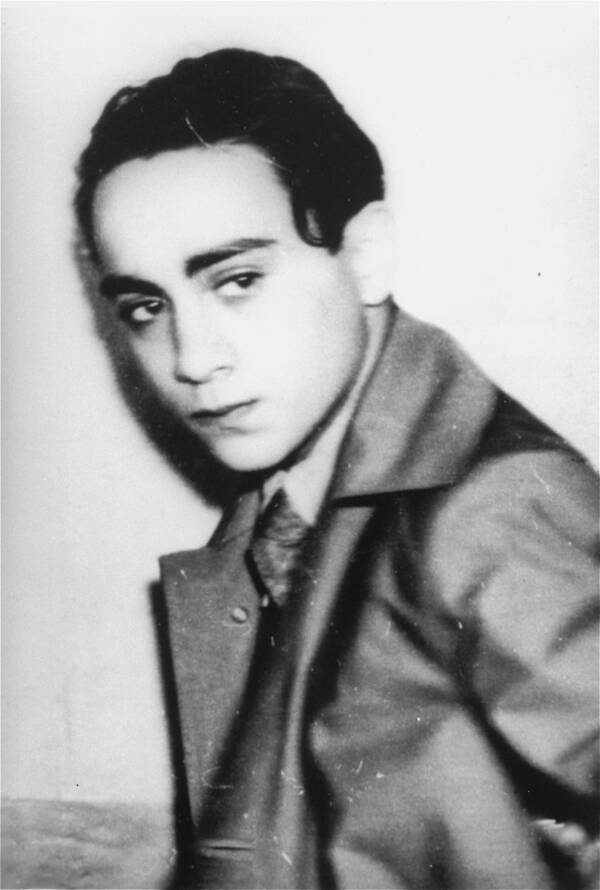 Wikimedia CommonsHerschel Grynszpan in custody just after his arrest.

However, Hitler and his inner circle had hoped to make a media circus out of the trial of “the Jew Grynszpan” and, in preparation, Grynszpan was even interrogated personally by the so-called architect of the Holocaust, Adolf Eichmann.

In the end, the trial was over before it had even begun. The legal proceedings, which captivated millions of radio listeners and newspaper readers, were interrupted by the 1940 invasion of France.

Grynszpan was consequently transferred to the Sachsenhausen concentration camp outside Berlin, where he is believed to have perished. There are no official documents about him after September 1942. 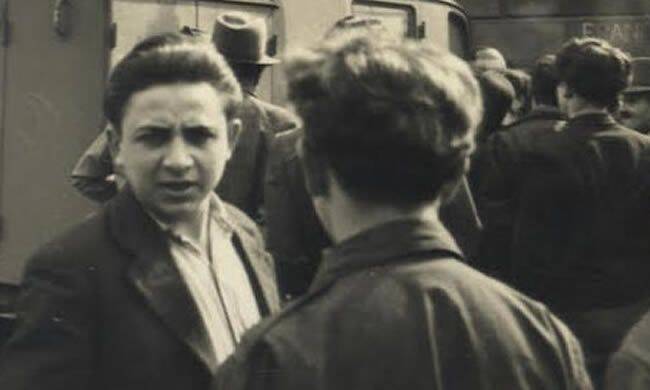 Vienna Jewish MuseumThe German historian who came across this 1946 photograph insists that it is Herschel Grynszpan.

Herschel Grynszpan’s parents managed to survive the Holocaust and moved to Israel in 1948. They declared Grynszpan legally dead in 1960.

But in 2016, a 1946 photo surfaced that some experts claimed to be of Grynszpan in Palestine.

“There is little doubt this is Herschel Grynszpan,” German historian and journalist Armin Fuhrer, who discovered the photograph, told The Guardian.

“It certainly raises more questions than it answers,” Fuhrer added. “Not least what did he do with the rest of his life, and perhaps more importantly, how did he manage to survive the Nazis?”

Grynszpan’s story has certainly invited a generous amount of speculation. Though Grynszpan himself claimed to have acted alone on behalf of his people, others have posited that he was perhaps coerced by the Nazis to give them a reason to begin persecuting Jews en masse.

Herschel Grynszpan’s survival could mean that a catalyst for one of the most gruesome genocides in history carried on despite the whole force of fascism trying to destroy him.

After learning about Herschel Grynszpan, see some of the most powerful photos taken during the Holocaust. Then, learn about the horrors of the research that the Nazis carried out on their prisoners.